Surround sound headsets are a fine idea in principal, but you have to be awfully careful if you’re thinking about buying a set. Tempting as it might be to plump for an affordable effort like the Saitek Cyborg 5.1, you need to spend a little more before you get a truly beneficial advantage over good stereo headsets. Sharkoon, though, have been at it for years and are one of the more trusted names in this market, so we were quite looking forward to giving the latest version of its X-Tatic Digital 5.1 set a good test – especially since it meant playing games and watching films. It’s a tough job, but someone has to do it. 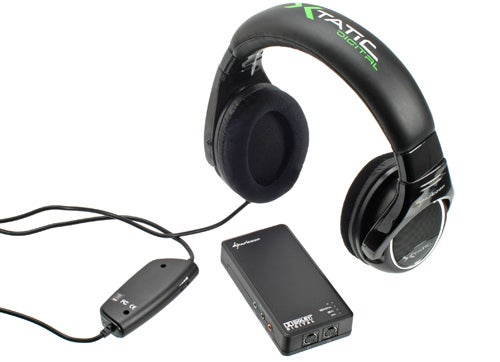 What separates Sharkoon and its ilk from the likes of the Saitek Cyborg set mentioned above is that the X-Tatic Digital comes with its own Dolby Digital 5.1/Dolby Pro Logic decoder box. This makes it ideal for use with any device with an optical audio output, specifically games consoles like the Xbox 360 and PS3, but also PCs with digital outputs and DVD or Blu-ray players. However, it’s really consoles that stand to benefit the most, since unlike most PCs they don’t have analogue surround sound outputs to connect to.


To underline this console oriented focus, the X-Tatic adds headset support for both the Xbox 360 and PS3 – the former via an adapter that plugs into the controller, the latter via a USB connection on the System Control Unit (SCU) which also works with a PC. Of course one downside to all this functionality is wires: lots of them. Just to connect an Xbox 360 you’re looking at an optical audio cable, a power adapter that connects to both the SCU and the headset itself, some three metres of cable from the headset to the SCU and another wire that feeds from the inline volume control to your Xbox 360 controller for microphone support. If you do have a particular phobia of wired clutter, this set probably isn’t for you. 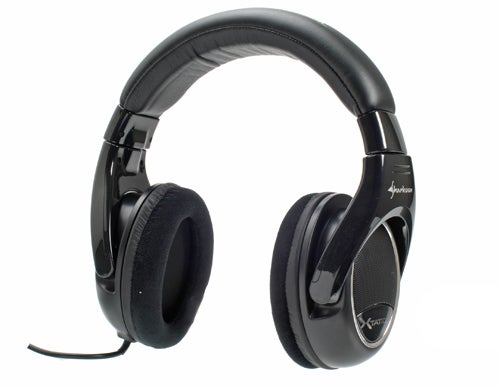 Provided you’re prepared for this, though, actually setting up the X-Tatic Digital is relatively straightforward. Everything you need is provided in the box, including: an optical audio cable, USB and mini-jack cables for Xbox 360 and PS3 headset support, a dual output power adapter for the SCU and headset, and an analogue adapter for using the headset without the SCU. If you’re familiar with such things it’s just a matter of slotting the correct plugs into the correct sockets, though if you’re unsure the provided instructions are clear and to the point.


Once you slip the headset over your ears you begin to appreciate what years of evolution feels like. Despite looking and feeling quite bulky this is an incredibly comfortable set to wear. Soft, breathable, well-placed padding on both the earpieces and the headband ensure a firm hold that won’t leave you feeling hot and bothered or sore. This comfort is enhanced by the usual adjustability, with the cups tilting to fit your head and extendable arms, should you have an unusually large head. Even after a three hour session we barely felt the effects of wearing the set, which is much more than many good headsets have managed in the past. 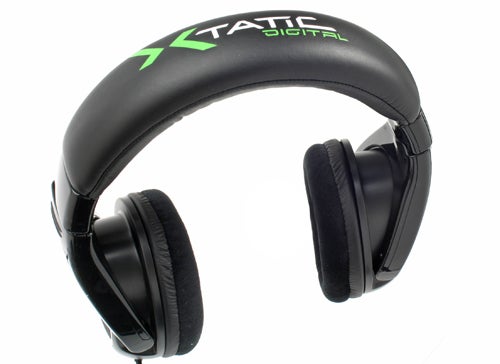 It should go without saying that this comfort is wedded to excellent build quality, since the two generally go hand-in-hand. Sure, £110 for a gaming headset is a lot of money, but the headset alone is an encouraging sign of things to come.

As you may or may not have worked out from the lack of a visible attached microphone, it’s detachable. Whether this is a good thing or not rather depends on your point of view. It’s good since it’s not in the way when you’re not using it, but bad if you need it and then can’t find it. In any case it’s a perfectly decent microphone and it slots securely into a mini-jack with no problems whatsoever. 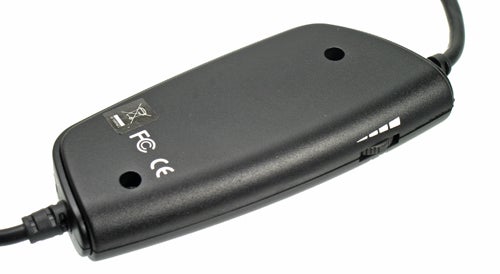 Moving down a little further we find the inline volume control. This doesn’t quite have the sturdy, quality feel of the headset, but it crams in plenty of functionality. With this you can control not only the overall volume of the headset, but the levels of each channel. This works in a slightly ingenious way, too. On the left edge is a rocker switch for adjusting the volume, which when pressed inward mutes the headset. This is the master control, with buttons for selecting each channel on the front face.


What’s ingenious is how the volume level is communicated by means of multi-coloured backlighting. So, for example, the minimal level is green and this progresses into the different shades of blue, white and finally red at its maximum. Though it sounds somewhat convoluted, it’s actually a very effective visual means of illustrating the volume level, particularly when tweaking different channels. Also on the inline control unit is the Xbox 360 headset mini-jack, with a mute switch and volume dial for the microphone also provided.

Continuing our downward path, at the end of the ample 3.6 metre headset cable are two connections: one for power and one 9-pin connection to the SCU. This 9-pin plug slots into the corresponding connection on the SCU, which has two such ports so you could connect a second headset – a nice touch, though not one many are likely to use. An analogue adapter, which breaks out into three 3.5mm jacks, ensures the set can also be used without plugging it into the SCU.


Looking more closely at the SCU, it’s probably the least well designed segment of the whole set. Its plastic shell feels rather hollow and flimsy, while the assortment of buttons and switches hardly inspire confidence. As such it’s probably best kept somewhere where it won’t encounter too many bumps and scrapes, either on a desk or tucked safely underneath one. 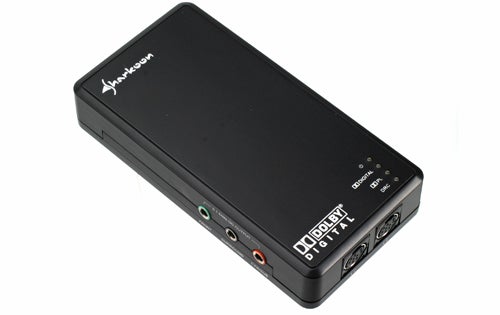 Along with the two 9-pin headset connections already mentioned you’ll find the optical audio input, USB-B port for PS3 headset support and three analogue audio outputs so you can connect some surround sound speakers – great for those times where discretion isn’t necessary!

Where things get slightly complicated is with all the adjustment options open to you on the SCU. Aside from volume, which can also be controlled on the main box, you can adjust the time delay and Dynamic Range Control (DRC), which is only available with a 5.1 channel mix. Adjusting the time delay creates a more ‘spatial’ effect by accentuating the difference between the centre and surround channels. This is all well and good and many may enjoy tinkering with this, but any changes you make inevitably have a negative impact on the realism of the output. Ultimately we found it preferable to leave things as they were; a fact not helped by the rather confusing system for adjusting it or the rather sparse explanation of its impact.

Dynamic Range Control is a little more interesting. When activated this decreases the difference between the quietest and loudest segments of the audio track. This might not be desirable if watching a film, but in games it can help illuminate the quieter effects that might give you an advantage – such as someone stalking you from behind. Again, though, its benefits are difficult to quantify and you may well find the same, or similar, effects can be achieved through tweaking the individual channel volumes to suit your needs and preferences.


This just leaves performance and sound quality itself to evaluate and it’s generally a good story. There are eight speakers in total, four in each earpiece, with two for the front channel, two for the centre channel, two for the rear and two for the sub. Combined with a good Dolby Digital 5.1 sound mix they do a great job of creating an immersive, accurate surround sound experience within the confines of a headset. Audio placement is excellent, so you can quickly gauge what’s going on behind you and where danger is coming from.

It’s the immersion created that’s the real draw, though. It brings an extra dimension to games, particularly atmospheric titles like Bioshock or Dead Space, but also to films. We fired up Band of Brothers to see how the set coped and were instantly impressed. In the famous gun battery operation in the second episode, the excitement of the clinical raid is brilliantly produced as bullets rain in left, right and centre, while the dialogue as Damien Lewis barks orders remained perfectly audible despite the action surrounding him. Just the overall level of detail and clarity alone is very impressive, though we did feel the need to boost the sub volume level a little to give the thud of bullet impacts that little more punch.


Analogue performance is also very good. And, though one wouldn’t typically recommend a 5.1 set for listening to music, if the occasion arises the Sharkoon’s do a reasonable job of that too. 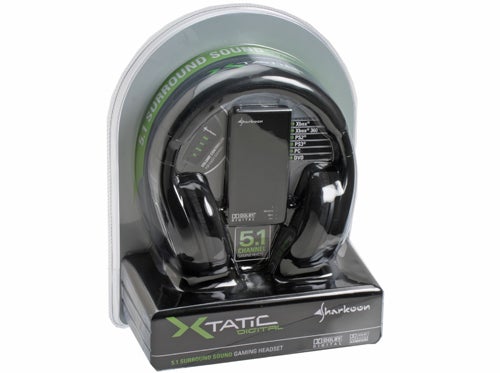 What prevents the Sharkoon’s from being truly outstanding, though, is that they lack the overall power to produce heavy effects. While its collection of small drivers created plenty of atmosphere and loads of detail, explosions just lack the power and presence you’d hope for, sounding a little thin and puny. It’s a shame, too, since in most other respects this is a very fine headset; one that represents good value for money and is arguably a must have for any keen console gamer.


A combination of great surround sound production, features and outstanding comfort make the Sharkoon X-Tatic Digital among the best surround sound headsets around. A slight lack of power and presence prevents an award overall, but that shouldn’t eliminate it from your shortlist. For the money, it delivers admirably.