What is the Shark HV320UKT Rocket Light True Pet?

Having seen a few cleaners in our time, Shark’s HV320UKT has a very US-centric feel about it. It’s chunky, a bit bling with its chrome trim, and looks built to survive a small nuclear strike.

It also inhabits a sparsely populated spectrum of the market that is mains-powered combination stick-vac/handheld cleaners. Most brands in this sector are battery-powered, but the HV320UKT trades cordless convenience for sheer suction grunt. 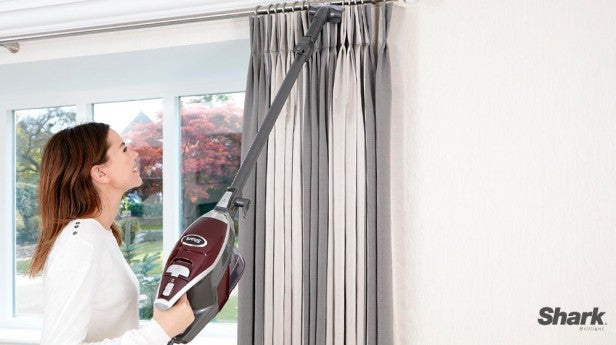 The main business-end of this Shark unit houses the motor, bagless system and a compact 0.9-litre bin slung beneath for easy removal. As a handheld cleaner, this unit can attach directly to all the tools, with a very positive click mechanism for the larger heads. This makes it ideal for those small clean-up jobs or tidying up the car, for example – assuming your vehicle is within reach of its otherwise usefully long 8m cable.

There’s no cable rewind, only winding hooks on the body and lower part of the tube, so that cable adds to the challenge when you put the Shark away. The main unit and most of the accessories all dock nicely together into a compact bundle for relatively easy storage.

Despite ditching the need for a heavy battery pack, the HV320UKT is no featherweight. While the main handheld part is a respectable 1.6kg – about the same as the cordless Dyson V8 Absolute – start adding tubes, tools or heads and the Shark’s weight will max out at 3.7kg. As a stick vac it certainly feels bulkier than many rivals. 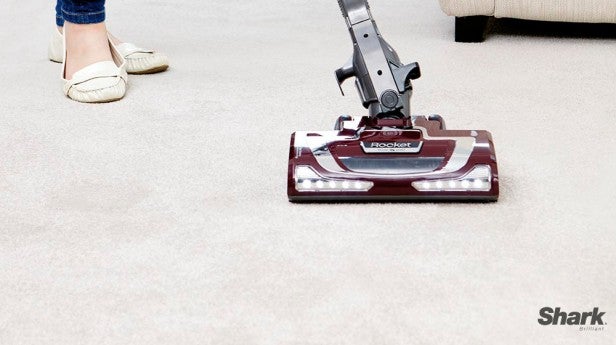 The accessories list is spectacularly comprehensive for a sub-£200 machine. The main floor head isn’t overly wide but its heavyweight construction hints at a lifetime of being smacked into obstacles without falling apart.

Its neck combines a tilting action with side-to-side movement for all round flexibility, resulting in a good range of – albeit relatively stiff – movement. The head’s deep section base moves on two large wheels at the neck and two small rollers at the front, with a fine row of soft sweeping bristles in-between.

Its motorised brush bar sports a traditional layout of two rows of stiff-ish bristles, but they extend very close to the outside edges of the head – particularly on the left (from above), where the bristles end up some 3cm in from the tool edge. If you’re going to tackle edges with this floor head, make sure you’re using the right-hand side, where the bristles get much closer to the skirting edge.

There’s also a row of LED headlights along the front to light the path and an LED light on top to indicate if the brush bar is tangled up. An panel beneath allows the bar to be easily accessed for cleaning.

A second, smaller motorised brush tool is also supplied and is equally solidly built, if not super-light. This tool is very much for use in handheld mode, featuring a short brush bar and a pivoting base-plate to keep it in contact with the floor. This tool also benefits from a small air-release slider to reduce suction and avoid stick-down on smooth surfaces. 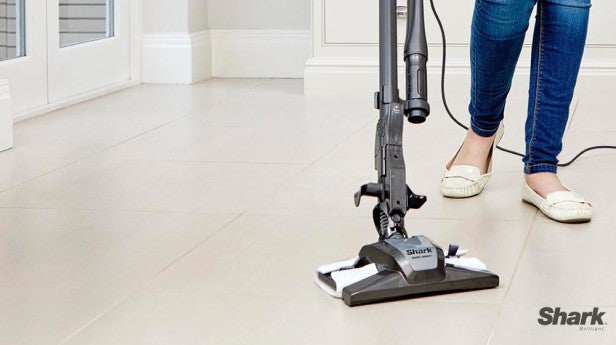 Mini-tools include a good-sized dusting brush, an upholstery tool with a rather stiff rotating neck (on our sample, at least) and an unusual telescopic crevice tool. Not only does this extend from about 30cm to 50cm, the last 20cm is quite flexible, allowing it to be bent into inaccessible places. This was useful for getting deep down behind radiators.

That list alone would make the HV320UKT a decent vacuum cleaner, but Shark goes a step further. This model comes with Shark’s Dustaway hard-floor head. This takes a traditional stiff-bladed hard-floor head and adds a large, soft-padded area that ensures dust is swept into the airflow and has the effect of sweeping and buffing the floor.

The pad can be removed and is machine-washable and replaceable when it has buffed its last. The Dustaway head is fitted with a smooth-action tilt and pivot neck, which makes the main head look a little stiff in its articulation by comparison.

Add to all this a washable filter, a dock for a couple of the smaller tools and a wall-mount for the main body, and the HV320UKT is a very well-appointed cleaner indeed.

A thumb-slider near the handle offers two settings – but these aren’t variable power. Instead, it selects the speed at which the floor-head brush bar rotates. This spins relatively slowly on the first setting, ideal for deeper-pile carpets suggests Shark, and at a much faster speed on the second setting for shorter-pile carpets.

On either setting, the HV320UKT’s mains-powered motor has a purposeful sound running at around 80dB with the non-powered tools, 81dB with the main floor head on setting 1, and 83dB on setting two with the brush bar at full speed. That’s a couple of decibels less than stated on the energy label and, in reality, about the same as Dyson’s V8 on its maximum power setting. 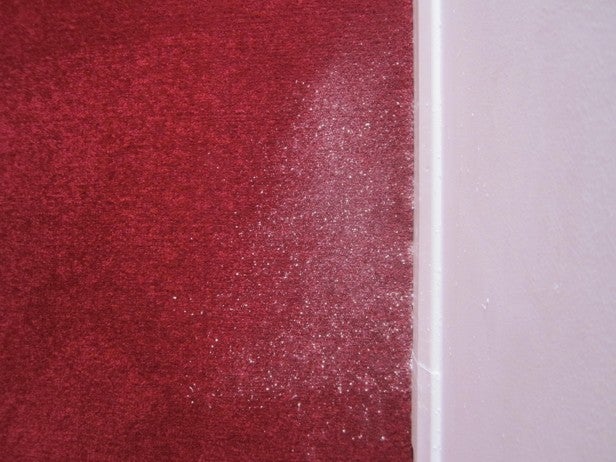 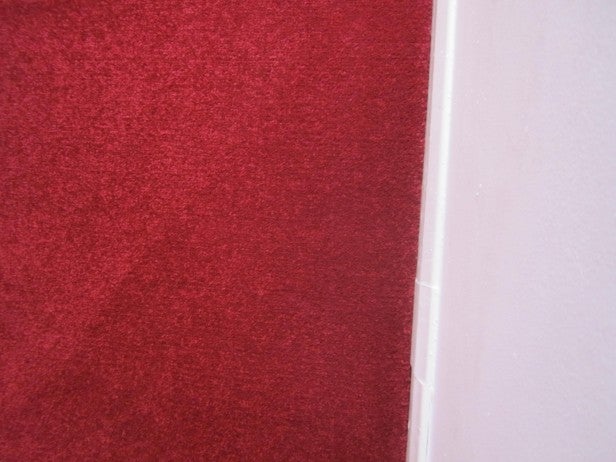 A simple hand-over-nozzle test demonstrates that sound is the result of some serious suction power. This is where the mains power really comes into its own, delivering probably twice the suction power of even the best battery-powered stick vacs in their standard cleaning modes, and up there with the Dyson’s V8 on its Max power mode. Of course, the V8 will clean for just over half-a-dozen minutes at that power. The Shark will run as long as you’re paying your electricity bill.

It isn’t all roses in the power and run-time department, though. The 0.9-litre bin remains bijou, and in a family house – think dogs, kids, DIY in the living room – cleaning will be frequently interrupted with the need to empty that bin. More so, in fact, since the Shark delivers such great cleaning power that it will pick up more dirt for the same area covered.

Out on open carpet with the big Rocket floor head, the HV320UKT feels quite lengthy and pushes a fair way out in front of you. It’s relatively easy to manoeuvre and the stiff neck on our sample began to loosen a little over time, making it even easier.

Results were top-notch, up there with lower-power/entry-level mains-powered upright vacuum cleaners, and benefiting from the head light to track down dirt – or, in our case, doggy furballs. The carpet was left well-groomed and the test patch was cleaned easily in a single sweep. 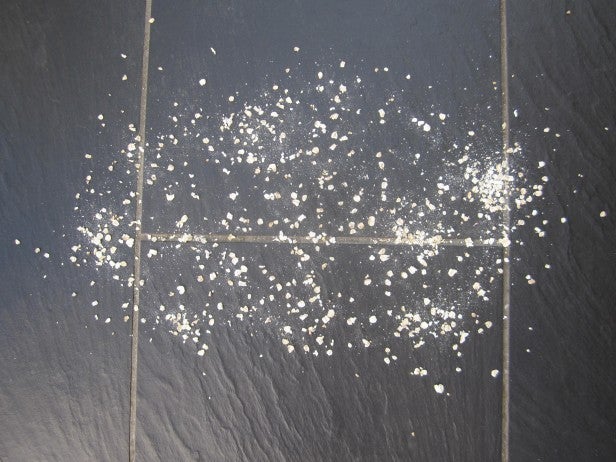 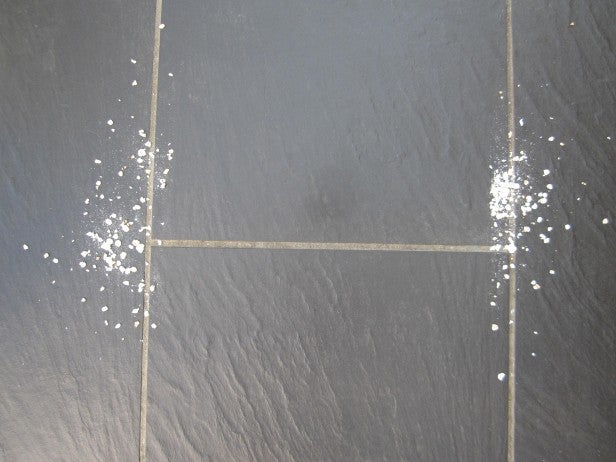 Performance up close to the skirting on carpeted floors proved a little more variable, largely dependent on the direction from which you attacked the job. As noted from the design, the main head works much better with the right side used against skirting, and in this position turns in a very good performance. Two passes and the carpet dip by the skirting edge was exceptionally clean.

On hard floors, the Dustaway head might polarise opinion. On laminates, parquet, vinyl and tiles it moves easily, sliding around smoothly thanks to the front wheels and soft pad. Too easily, in fact. As it slides everywhere, turning your wrist to steer the head doesn’t do anything bar turning the head partially side-on as it continues in the same direction.

Moreover, while it collects dust well on the front stroke, with the pad buffing the floor behind, on the back stroke dirt and hair hit the pad first and stick there. After cleaning only half of the kitchen, the pad was a real mess, itself needing vacuuming by the bare handheld unit before we could continue.

Handheld convenience, motorised tools and serious suction power are the holy trinity of effective stair-cleaning, and the Shark does not disappoint. The smaller motorised tool is absolutely perfect for straight carpeted steps and gets into most of the nooks and crannies on turning steps too. Ironically, the crevice tool that we’d normally have in our back pocket to clean the really tricky parts of steps is just too large to be of much use here.

On hard wooden steps the dusting brush comes into its own, being a good size to clean a decent area on each pass but still compact enough to be easily manoevrable on tight or turning stairs. Again, the HV320UKT performed superbly.

The issue, of course, is that trailing cable. As we’re now familiar with cordless handhelds for stairs, it does feel a little antiquated to be playing Double Dutch half way up the stairs while cleaning. That said, despite the lack of true cordless freedom, the 8m long cable provides plenty of reach before you needing to search for another power point.

Opting for a cleaner with the word “pet” in the product name is always a good starting point for homes with furry friends, and the Shark HV320UKT Rocket Light True Pet certainly lives up to that part of its appellation.

The main Rocket head is excellent on pet hairs, particularly on its slower speed mode where it very effectively picks up entwined hairs from carpet pile. The living-room rug, with its shorter nylon pile, proved little challenge to the Shark in this mode. The result was a very easy and effective clean.

Our test patch of mixed Collie and Labrador hairs rubbed into the carpet was cleaned in a simple forward and backwards pass, in perhaps six or seven seconds at most. This is well within the time that we determine makes for an effective “pet” vacuum cleaner and an excellent result all round.

The same was true when using the smaller motorised head on the carpeted stairs, where our collie sits and watches the testing unfold. The mid-length black hairs on cream carpet were dispatched quickly and easily. Getting the dog to sit on the step on which we put a towel for this very reason – far more challenging.

One anomaly chasing pet hairs over hard floors or hard steps with the handheld unit is the downward-firing exhaust. While this stops the exhaust airflow pushing back into you face, if you try to pick up the odd hairball on hard floor with the handheld alone, expect to have a bit of a chase on your hands. 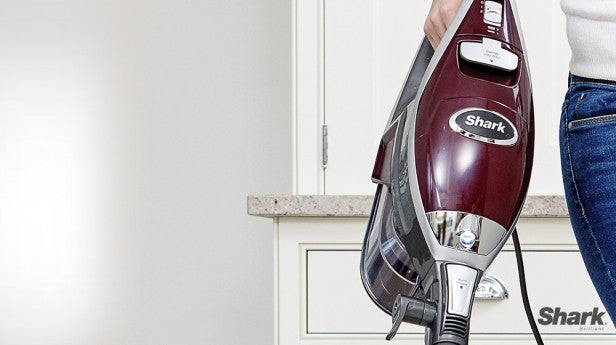 Should I buy the Shark HV320UKT Rocket Light True Pet?

The wonderfully titled Shark HV320UKT Rocket Light True Pet is a fabulously effective, superbly built and well-appointed cleaner. It offers some great features such as the bright front lights and variable speed brush bar in the main head. We didn’t have quite so much success with the Dustaway hard-floor head, but overall, the tools are excellent too.

What is likely to polarise opinion is that cable. This is a mains-powered cleaner in a typically cordless sector of the market. It unashamedly trades cordless convenience for greater suction power and a longer run-time than any battery-powered competitor can muster – even at twice its price.

If you like the overall idea of a hand-stick-style vacuum cleaner, but want mains-power performance, then this is the vac for you.