This is a saga of baffling decisions.


Back in 1989 FASA corporation designed a new tabletop RPG, Shadowrun, that married the trendy tech-noir of cyberpunk with the usual tropes of Dungeons and Dragons. This was something of a cult hit, and in 1993 Nintendo released an isometric action RPG based on the game. Thanks to a compelling storyline and some decent game mechanics, this in turn won cult classic status, and is still widely and fondly remembered today. 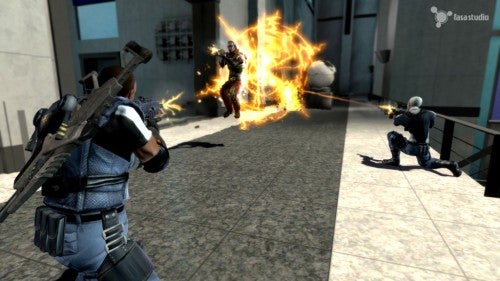 Having bought FASA Interactive in 1999, Microsoft had acquired the rights to create a new Shadowrun game, which it duly announced last year. Baffling decision one: this game isn’t a Mass Effect style RPG or even a Deus Ex style hybrid RPG/Shooter. Instead, it’s a competitive online-focused FPS that will launch not just on the Xbox 360, but on Microsoft’s new Games for Windows Live. Baffling decision two: Games for Windows Live is predicated on the bizarre idea that PC gamers who upgrade to Windows Vista will be willing to pay £40 for services they already get from third-parties for nothing, in order to play – for now – a limited number of first-party Microsoft games. Somebody inside Microsoft must think this is a good idea. Nobody outside Microsoft seems to.


The sad thing is that all the hostility this has caused has already obscured the fact that, underneath, Shadowrun is actually rather good. 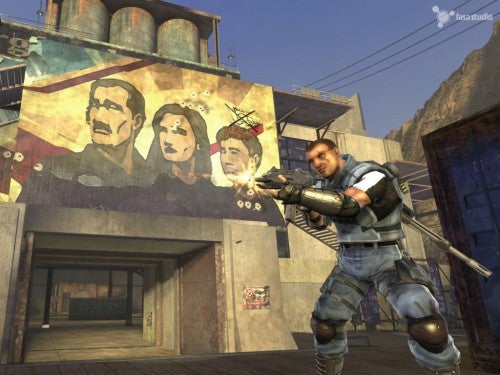 Here’s the basic setup. In a couple of decade’s time, the forces of magic re-awaken. Dormant genes transform many normal humans into weird Tolkien-esque dwarves, elves and trolls. In Santos, Brazil, a huge global corporation is fighting against a small band of resistance fighters for control of a mysterious artefact. Wielding cutting-edge cyberpunk tech and sorcerous powers, the two forces battle each other throughout the skyscrapers and slums of Santos, and in the ancient ruins nearby.


In gameplay terms, this comes down to Counter-Strike meets Deus Ex meets Neverwinter Nights, the action taking the form of a series of capture the flag missions – where two teams vye for possession of the artefact – and simpler, CS-style eliminations. So far, so so. But what could be standard run-and gun gameplay is enlivened by two things. Firstly, the races; whether you play as a dwarf, elf, troll or human, each comes with specific benefits and drawbacks. Elves move faster and can heal themselves, Master-Chief style, but aren’t quite as robust as the other races. Dwarves can drain magical power – or essence – both from other characters and from location-based, passive spells. Trolls are tremendously tough, and have a cool skin-hardening armour effect, though this comes at the cost of limited movement speed. And humans? Well, humans don’t get such cool abilities, but they can use technology without affecting their magical abilities, making them a slightly more flexible choice. 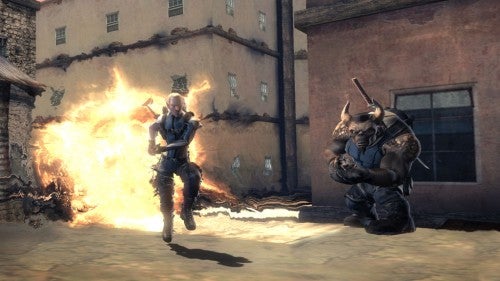 In Shadowrun, such flexibility is vital, because the mix of magic and technology – with spells and equipment bought Counter-Strike style before each round – affects every single part of the game. You can see it in the way characters move. Players gliding and teleporting around the level are a common sight in matches, and a distressing one when the git you’re pursuing suddenly shifts backwards then teleports two feet behind you and blasts you with a shotgun.

Other powers allow you to take on a nebulous ‘smoke’ form, meaning you take no damage from weapons or falls while cloaked, or throw out a cluster of ‘strangle’ a crystalline barrier that hurts and holds hostiles who get to close. Tech upgrades boost speed or perception, but only magic can help you summon demonic minions to guard an area or relentlessly hound your foe. Cast the Tree of Life spell, and characters sheltering nearby are slowly but surely healed. 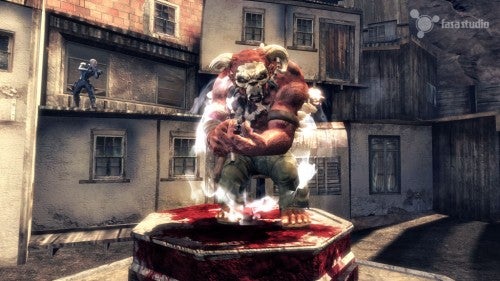 All these powers and upgrades are intricately and superbly balanced. The Smoke ability seems great until you learn that the Gust spell, which usually only blows the target backwards, can also be used to rip a ‘smoked’ character apart. The Smartlink boost adds a cool laser-targeting system and some degree of assisted-aim, but it also sends out a laser beam that tells anyone with eyes to see that you’re on your way around the corner.


The most important spell in gameplay terms is Resurrect. Shadowrun goes in for short, Counter-Strike like rounds without respawns. Die, and you’re out of action until the next round starts. However, if your allies are equipped with a ‘rez’ or ‘rezzie’ as the players like to call them, they can find your corpse and bring you back to life. There are two caveats involved here. Firstly, if a particularly mean player blasts your body to bits after death, nothing’s going to bring you back. More seriously, once resurrected your wellbeing depends on that of your resurrector. They die, you die… and slowly, bleeding out second by second by second. 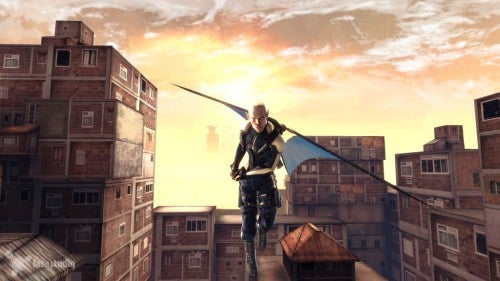 The end result of all these mechanics is an ingenious team FPS that truly puts the emphasis on teamwork. Unlike Team America, there really is no ‘I’ in Shadowrun. It has much of Counter-Strike’s tension, but also some hope of reprieve. There’s nothing more heartbreaking than watching as the goon who just downed you aims his gun to finish the job, but also nothing more uplifting than the sight of him interrupted by a team-mate who blasts him and then brings you back. Watch games in action, and it’s clear that teams who look after each other – who back each other up, patrol and resurrect, and guard the artefact holder on their way to the exit – get better results. It’s also clear that while Shadowrun has no formal class system as such, the mechanics do encourage players to take on specific roles. Take troll, add minigun, smartlink and strangle or minion, and you have a great back-end defender or heavy-duty assault troop. Take elf, add katana, smoke and teleport, and you have a classy ninja on your hands. Somebody really has thought very carefully about all of this. 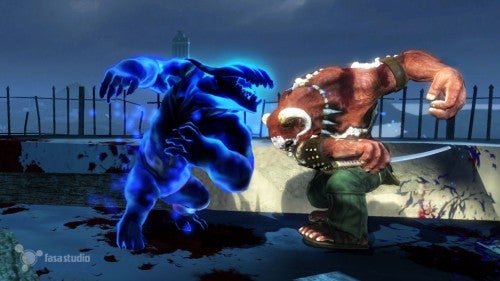 Of course, all this comes with a certain level of complexity, so it’s well worth playing through the tutorials and a handful of bot matches before you start playing online. If you don’t know the levels and understand the tech and magic, you simply won’t do well. Get the hang of it all, however, and there’s a lot of fun to be had. All the usual online FPS moments – the daring raid, the last-ditch defence, the heroic assault, the winning flag rush, the sudden stealth kill – are here, and the magic/tech mechanics really do add something to the formula.

In terms of presentation, Shadowrun does very little wrong. The overall look and feel is slick and the game setup system works a treat. Visually, it’s not quite in the GRAW2/Gears of War league, but it’s on a par with Rainbow Six: Vegas, Perfect Dark and others, with fine art-design, some fabulous lighting, some fine displacement and particle effects for the magic, and distinctive, well-formed levels. The only major disappointment is the lack of character designs; it would have been nice to have has more than one look per race per team. 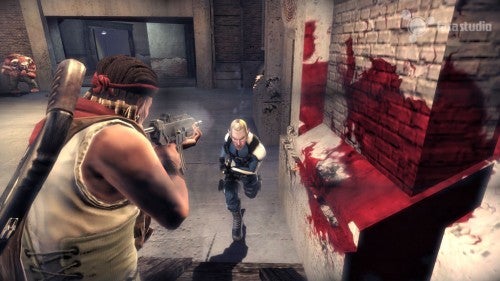 Sadly, just as this saga seems headed for a happy ending, we get to the most baffling decision of all. Shadowrun is thoroughly enjoyable, but it just doesn’t feel like a complete package. For £30 or £40 you have a right to expect more than three game modes, 12 maps (three of which are just cut-down variations) and no single-player mode bar six tutorials and a botmatch. What’s more, the big idea Microsoft is pushing with this one – the ability to play against Vista or 360 players regardless of which platform you’re playing on – simply doesn’t hold much water. In the end, do you really care whether your opponent is on a 360 or on a PC? Does it make the game better that some players have auto-aim and some have their reticule fudged to reduce the keyboard/mouse advantage? At the end of the day, don’t you just want enough players to make a decent game?


More worryingly, I can think of at least four games on the 360 – Call of Duty 3, GRAW2, Gears of War and BF2: Modern Combat – that have equally impressive multiplayer modes but come packaged with a more or less brilliant single player game. And that’s before we even start thinking about Prey, F.E.A.R. or the upcoming Half Life 2 and Halo 3. On the PC, Shadowrun has almost too many rivals to mention. With Battlefield 2142, Counter-Strike Source, Half-Life 2 Deathmatch, Call of Duty 2, Prey and Quake 4 to play right now, plus Unreal Tournament 3, Crysis, Quake Wars: Enemy Territory and Team Fortress 2 on the horizon, you have to wonder why Microsoft feel £30 for Shadowrun and £40 for the Live service sounds like a good deal. 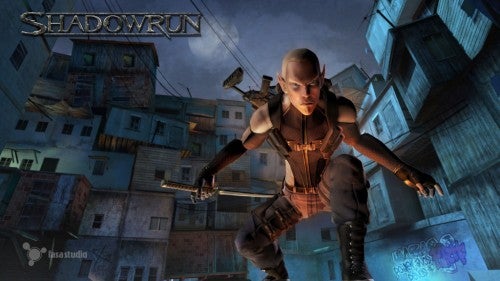 It’s a shame. Shadowrun is a unique, compelling and well-balanced online FPS, but it’s one that desperately needs new and – importantly – free content to make it a real ongoing concern. Overall, you can’t help but feel that Microsoft has royally shafted its own game. As a cheap release given away with a Games for Windows Live subscription or as a bargain-priced 2700 point Xbox Live download, most people would have lapped it up. As it is, Shadowrun deserves a bigger audience than it will likely attract.


A fine, superbly balanced FPS that mixes action, magic and Sci-Fi tech with real skill. But why pay £40 for a Vista only multiplayer game when other single-player games throw one just as good in gratis?