Critics may claim that developers should only ever aim to deliver true originality, but there’s something to be said for a game that improves on an existing concept.

No-one wants to open the door to clones – mobile has been party to plenty of that over the course of its relatively short existence – but, in the fast paced smartphone scene, today’s hit quickly morphs into yesterday’s classic, and refining what at first seems like a piece of portable perfection into something even more potent has become an art form.

That’s what immediately springs to mind when you start up Shadowmatic. The idea – shifting shadows so they resemble an every day object – touches on a bevy of different mobile releases from across the years, yet the way the concept is delivered means what Triada Studio has served up here feels nothing like a rehash. In fact, it has the feel of the kind of fresh release the App Store has been missing for quite a while. 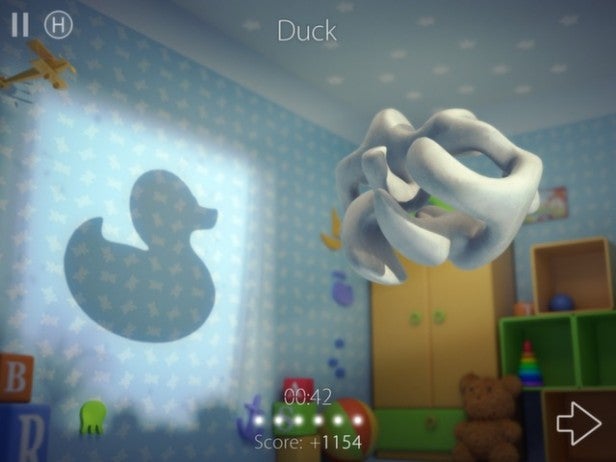 Your role is a straightforward one, with play revolving around you manipulating either one or a series of odd shapes so that the shadow they cast on a nearby wall resembles something else entirely. A handy indicator at the bottom of the screen lets you know just how close to the finished object you are, with the idea being to keep twisting, turning and revolving what is usually the bizarre contraption in front of you until it looks like a familiar object or animal.

Of course, during the early stages of Shadowmatic – each level accompanied by a haunting and stirring soundtrack that sends you into an almost Zen like state – there’s just one piece to play with and the object you’re aiming for becomes clear fairly quickly. Play soon ramps up, however, and more objects are thrown into the mix, with switching between the two governed by a pad in the bottom left of the screen. 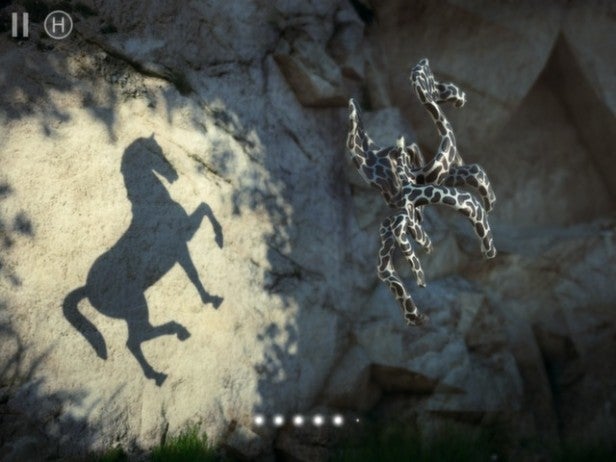 The quicker the puzzle is solved, the more points are on offer, though for those of you who find yourself stretched, a series of hints – from cryptic through to plainly naming what the object is – can be unlocked by using tokens you build up in play, ensuring that even the trickiest of stages doesn’t leave any committed players behind. For more accomplished players, they need never pay any attention to the hints system, taking on each level as delivered.

And, on the whole, everything runs smoothly. The fact you can spin objects a full 360 degrees does lead to the odd problem – it can, sometimes, appear to you that the object has been found, only for you to discover seconds later that Shadowmatic actually wants you to twist it left or right by a fraction to register. It’s the kind of issue that can act as a real blocker for those chasing the clock, but in reality isn’t in any way a game breaker. 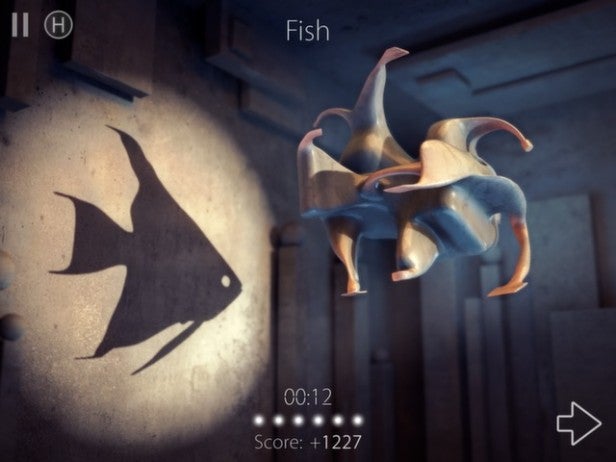 Indeed, it’s the slick and sleek way Shadowmatic is delivered that makes the greatest impression. Here’s a game that’s uncomplicated without being dull or straightforward and without being plain. It’s the kind of puzzle that can fill the odd five minute gap but, if the mood strikes you, has enough challenge and content to dominate your afternoon.

It is, in short, a game perfect for the mobile age, and developer Triada Studio should be applauded for taking an idea that could easily have felt archaic and making sure it fits in perfectly in 2015.

All in all, Shadowmatic may be about turning nothing into something, but as a game, it needs very little finesse and stands on its own two feet from the outset. Time will tell, of course, and such is the nature of the App Store, Shadowmatic could disappear from view just as quickly as it arrives, but we’d be willing to bet it casts quite a shadow over mobile for some time to come.

Verdict
A shape shifter in every sense. Shadowmatic is slick puzzler that sits perfectly on mobile, with its haunting soundtrack serving as the perfect backdrop to what is something of an instant classic.