There’s nothing more frustrating than playing a game with sound ideas that are never realised. Shadow of the Beast represents a prime example. It’s a terrible shame, as this revival of the 1989 Commodore Amiga game of the same name often displays a knowledge of the key elements that make indie platforming so exciting. Unfortunately these eureka moments are never capitalised upon leaving a bitter taste in the mouth and a game that consistently spikes and then plateaus for long, ponderous periods.

At a grand age of twenty seven, you’d be excused for not knowing what made the original Shadow of the Beast so exciting – I was also ignorant. Its reputation for sprawling levels and rhythmic challenges of dexterity precedes it. This was a game of metronomic instinct, where a series of one-hit challenges (boulders, spikes, more beastly beasties than the one you were playing) would be tossed about in semi-regular patterns.

The brand-new PlayStation 4 incarnation, in deference to the near-thirty year gap, attempts to blend this hypnotic key thrashing with a elements from more recent titles – the most significant update being its combat system. Battles now function like a lateral game of Tetris, with armed xenomorphs in place of Tetrominos, cascading from either side of the screen. Whilst most of Aarborn’s opponents can be dispatched with a single strike, some must be stunned, some must be vaulted, and others must be taken out using special attacks. 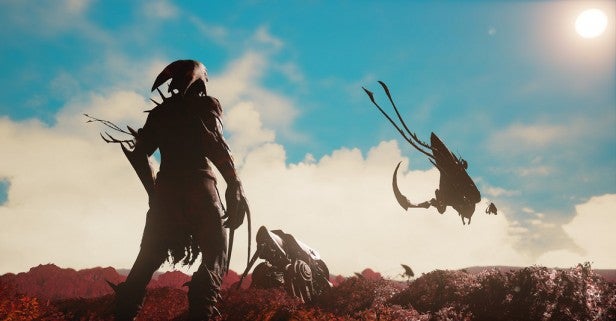 Hoardes amass in both directions, and the players must constantly monitor who is in the ‘Aarbron For Lunch’ queue on either side, timing their special attacks in both directions carefully. Looking beyond the most immediate enemy on either side is key, and what ensues feels more akin to a rhythm game than traditional platforming combat. You’re required to create a mental stack of the next five or six moves. It’s refreshing, satisfying, and brings together the original Shadow of the Beast with more contemporary game design.

This successful approach is, however, sullied by the game’s own inability to ‘mentally stack’ and forward plan.

As expected of a platformer, new elements are slowly introduced in order to gradually complexify the game’s mechanics, but Shadow of the Beast grasps these new tools simply to release them after a moment’s use. A gun is introduced to Aarbron’s arsenal and only required a handful of times; the player is taught to use spears and then only given a couple of opportunities to use them – frustration mounts as mechanical elements which should amass cumulatively are quickly gathered and then discarded. As a result the game’s closing battles actually require very little more skill and knowledge than its opening segments.

The environment causes similar expectation deficits by tantalisingly dangling complex constructs and then dropping them without warning. During one segment the game divides the background and foreground, forcing Aarbron to traverse between the two using portals in order to complete logic puzzles. An exciting prospect which was delivered intelligently… and then tossed aside. A terrible waste. 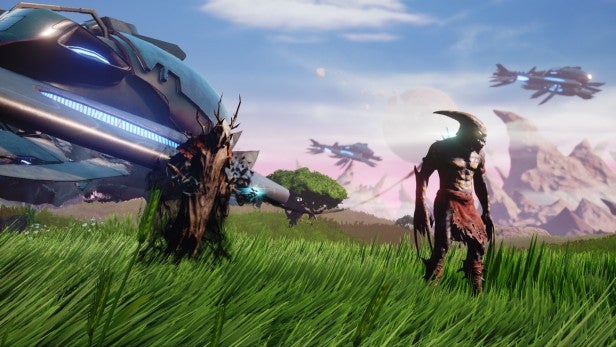 Heavy Spectrum Entertainment clearly wants players to leaf through the game’s levels multiple times to unearth every nook and cranny and unlock bonuses for a higher score – the game’s prime focus is not survival, but how extravagantly the player can string together combos and how high they can pile the digits. Unfortunately point-scoring alone here proves insufficient motive to re-trawl environs of relatively pedestrian design.

The puzzles, and gauntlets of dexterity on offer in Shadow of the Beast are run of the mill, so much so that the prospect of finding more simply isn’t worth the effort involved.

Boss battles also let down a combat system which deserves more merit than it will ultimately receive. Combat patterns are predictable, enemy health bars deplete all-too-quickly, and there is little-to-no ingenuity in makeup of each combat scenario. One boss sends spikes up from the floor, another spits fire from the ceiling, the archetypes are as well known as they are predictable.

My lack of intrepid spirit was only exacerbated by the game’s bemusing design decision to codify all spoken dialogue by NPCs. During the game’s brief cutscenes subtitles are rendered in a variety of nonsensical alien scripts, leaving the player wondering what on Earth is going on. I managed to gather this much: first I was a slave, then I was chasing a baby, then I wasn’t chasing a baby any more, then I stabbed a lot of people. The end. 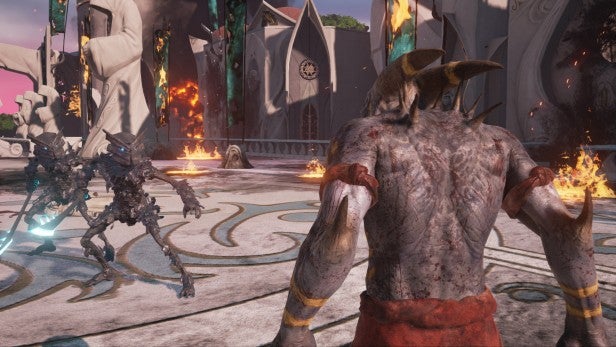 If desired, players can use points earned during each level to ‘unlock’ alien speech, allowing Aarbron to understand what is being said. However, said privileged access to this most basic of amenities is placed in an economic war with combat upgrades, as it’s the same currency which is used to boost Aarbron’s effectiveness in battle. Given the choice between beefier health, longer stuns, or understanding what Wiggins the bug-eyed phalanx is blathering on about, players will naturally always pick one of the former.

Given the brevity of its offering and the flatness of its platforming experience in lieu of exciting crests and troughs, it’s hard to recommend Shadow of the Beast under it’s current price tag of £14.99. Anyone looking for a masterclass in multi-layered running, jumping, and going splat would undoubtedly benefit under the tutelage of Oddworld: Abe’s Oddysee – New ‘n’ Tasty, which is a superb re-render of the original classic. Similarly, if you’re searching rhythmic combat, investing in any of the Arkham trilogy, which can now be snatched up for a pittance, is also more advisable.

If you’re unassailably set on revisiting Aarbron in this somewhat mediocre redux, then wait until the price drops to a more reasonable value. Momentary spikes of satisfaction can’t save Shadow of the Beast from the spectre (must.. not.. say… shadow) of its unrealised vision, made all the more confounding by the small glimpses it provides of the game that could have been. Instead of a full-blown return to form, this indie platformer feels more like a taster for the main course that never reaches the table.