The Servis W714F4HD is a great value, mid-capacity washing machine with far more features than you have any right to expect on a washing machine costing less than three hundred pounds. Unlike many models at this price you get a choice of three colours, white, silver or black, an impressive A energy rating and Servis’ own HydroDrive system.

Other headline features include a 12-minute super quick wash and a 60C, 60-minute cotton wash cycle for improved cleaning on tougher stains, while the Eco-Logic system claims to detect smaller loads and adjust the wash time accordingly. Few machines have impressed us from the outset with such a great feature set at this affordable price point, even if the silver version seems to attract a £20 premium taking it to around £320. 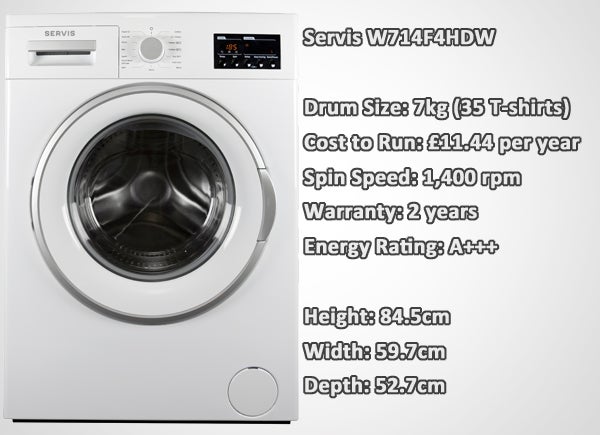 This is a whizz of a little washing machine too and it washes clothes well and with little fuss. The large chrome dial on the front turns easily to select the desired programme and the choice lights up on the orange LED display on the right hand side. Fine tuning features such as water temperature, spin speed, timer delay or easy ironing options can be added by pressing one of the solid feeling round buttons to the side display.

The wash is started by pressing the start/pause button on the front, which likewise requires a good firm push that indicates some pretty solid engineering quality. The porthole is not the cavernous maw of some of the larger machines we have tested, but the it opens plenty wide enough to stuff in a 7kg load. Once running the display indicates countdown time of the wash which we found to be, unusually, fairly accurate. More on this later.

Let’s not forget this is a budget machine because it is a little noisier than some of the top-of-the-range models that we have tested of late but, crucially, not by much. The washes all measured a fairly consistent 60dB irrespective of load of programmes selected, which is only slightly higher than Servis’ claimed 58dB.

As 60dB is a quiet speaking voice, you certainly won’t need ear muffs. On full spin it was consistently 79dB, exactly the same as Servis’ claimed figure. This highlights one of the key differences between budget machines and more expensive ones. For example, the quietest machine we’ve tested is the £600 Samsung WF90F7E6U6W, which measured just 68dB during its spin cycle, a full 10dB less than the Servis.

Still, if fitted in between kitchen cupboards rather than open in our lab it’s likely to be a bit quieter, and 79dB is still less than a vacuum cleaner and it shouldn’t be a major issue unless you sleep in the kitchen.

Servis W714F4HD: What programmes does it have?

There is plenty of programme choice with this busy machine. Along with the standard cotton wash with various pre-set temperatures, there is a woollen, easy care, mixed fibres and hand wash. The Servis W714F4HFD also offers a rapid 12-minute wash for lightly soiled clothes, albeit only suggesting it will achieve a sub 12-minute wash with 2kg of clothes or less.

That is a very, very quick wash with spin cycle and one of the fastest available, giving you the option to spruce up some clothes in the time it takes to make and drink a cup of tea. The extra options also allow you to delay the start time of the wash before the programme runs and there is also a handy easy-iron button,which will gently tumble your washing after it has been spun to loosen the clothing and lessen the wrinkles before ironing.

Sadly, there are no extra rinse modes for baby clothes or those with delicate skin. 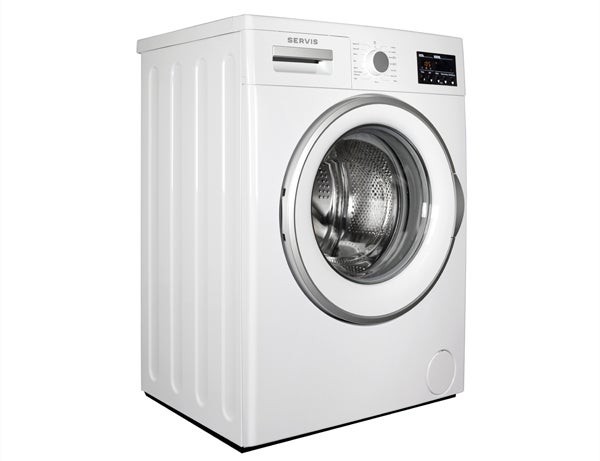 For our tests we ran three different wash cycles; a 40°C cotton wash with a 5.6kg (80%) full load at 1400 spin speed, a 40°C cotton wash with a 2.8kg (40%) load at 1400 spin speed and then ran a 20°C Eco wash with the same load capacity (there is no 40°C Eco wash as per our usual tests). The choice of an 80% load is more in tune with a genuine load as very few people stuff their washing machine to maximum capacity. We included a test stain strip in the first wash, stained with dried on ketchup, coffee, blood, red wine, juice and engine oil. We used a major brand non-biological detergent washing powder.

We could not resist trying out the 12-minute wash and running the program with a load of just two sets of cycling short/jersey combinations (well under 2kg) the machine completed the load a few seconds over 10minutes – staggering. We were a little concerned that this wash might not be that effective but given the state of sweaty cycling gear when it went in and the sweet smelling, clean garments that came out, the 12-minute wash is pretty good. 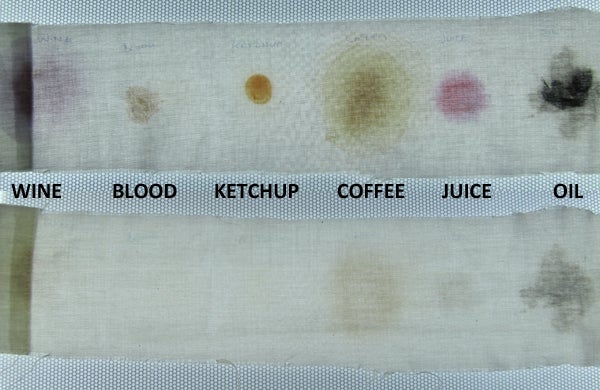 The wash results in the full load wash were good but not up to the impeccable results of the flagship machines we have tested.  Most of the stains were removed from our strip although the engine oil – as usual – stayed and also the coffee and biro that we use to write our labels (see image) were faintly visible. Viewed on the light box the stain from the juice was also visible. A bio-powder would have helped in these cases.

The spin results were very good and on a par with machines in a much higher price bracket.  The water weight left in the first load was 1.9kg (34%) from a 5.6kg dry starting weight which is above average, with the other two washes, using a dry weight of 2.8kg leaving 1.1kg (39%) and 1.0kg (36%) respectively – also above average. Well done Servis.

Virtually nothing! The energy consumption on the Servis W714F4HD is staggeringly low, especially on full load, which has upset manufacturers claims on many occasions in our tests. This used just 0.29kWh, which at a market average electricity price of 15p/kWh, is a very, very frugal 4.4pence, No really, that is a full load for less the 5p of electricity. That is by far the lowest energy to wash 6 kG of clothes we have tested to date. Ironically, the half-load 40-degree figures were a little higher, indicating this is a machine at its most efficient running on a full load. 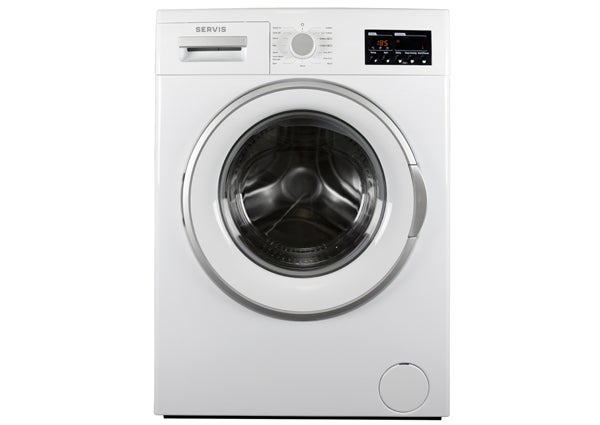 This is a well-specified machine, fully equipped and boasting plenty of easy-to-use programmes. Its exceptionally low energy consumption and fairly low water consumption, particularly if you max out the load regularly, make this machine very affordable to run over the years.

The energy and water savings can be seen to a small extent in the wash results, which were good but not exceptional, so there is a case of you pays your money and takes your choice. Bio power would certainly improve the wash results and for really mucky items you will need to use one of the machine’s ‘Heavy Soil’ programmes. All told, though, for the money this is a very decent machine.