Serious Sam 4 repackages, rather than reimagines the iconic shooter’s core mechanics in a way that will amuse fans of the original games. Sadly, a lack of innovation and outdated sense of hmour will undoubtedly put off newcomers.

Serious Sam 4 is the latest entry in an iconic first-person shooter franchise that was all the rage in the early 2000s. It is a game fans of the franchise have been awaiting for close to a decade, with the last “true” entry having launched all the way back in 2009.

Instead, it’s a direct sequel that sees you once again step into the shoes of Sam “Serious” Stone as he continues his fight against alien invader Mental, and his army of bizarre monsters.

This focus on “bringing the same classic chaotic run and gun, arcade gameplay” back to a new audience is Serious Sam 4’s greatest strength, and also its most glaring weakness. 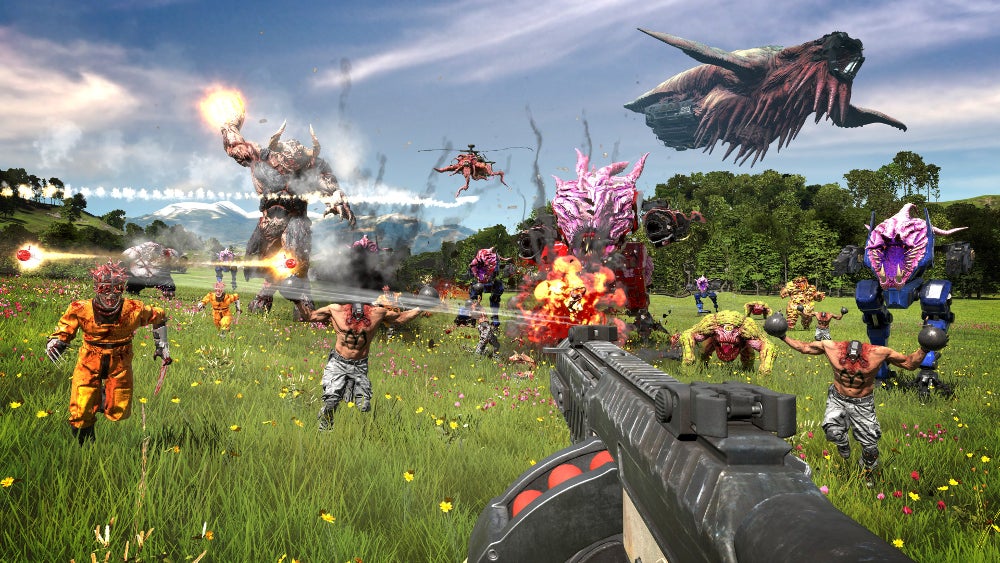 Starting with the positives. Serious Sam 4 is not a complex game. As shooters go it’s about as old school as it gets. It tasks you to blast through 16 levels, spread across three story chapters. Though the settings change in each, the basic goal is the same: blast your way from one checkpoint to the other using an increasingly awesome arsenal of weapons and gadgets to take out any alien foolish enough to get in your way.

If this sounds a little retro, that’s exactly the point. Serious Sam 4 wears its status as a “classic” shooter franchise as a badge of honour, and intentionally sticks as close as possible to the original games. The only changes are tweaks to the weapons and gadgets on offer, new attachments and an underbaked skill system.

These are pretty much the only things that offer any variety to the game, outside of the locale of the levels. Weapons are rewarded/discovered as you play and range from a basic pistol and double shotgun to outright ridiculous alien blasters. Attachments are rewards that let you tweak certain weapons, doing things like adding an under-barrel grenade launcher to your basic pump action shotgun. They act as the primary reward for exploring the game’s side missions, which are basically mini-levels within maps that task you to take down a challenging boss, or extended wave of enemies.

S.A.M is a skill system that lets you unlock new abilities using alien artifacts that are found in hidden locations littered around the game’s main campaign. These skills and gadgets offer the only semblance of strategy in the game. Skills are split into isolated clusters that let you do things like recover health from “melee kills” – which work in a similar way to Doom’s executions – or dual-wield weapons.

The combination of factors aren’t terribly original, but they manage to entertain in an oddly comforting way by offering a no-thinking-required, over-the-top arcade shooting experience that’s so absurdly silly it’s hard not to get enthralled in the opening hours.

Related: What you need to know about the PS5 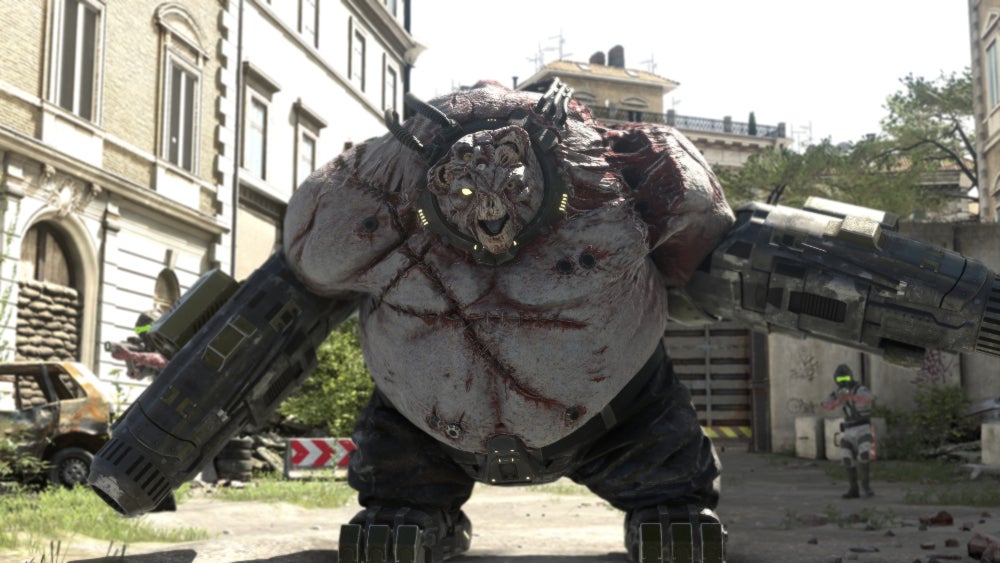 From the opening scene to its end credits, Serious Sam never gives you pause for thought. Every level you’ll find yourself shooting, burning, kicking, stabbing and generally doing unpleasant things to an outright ridiculous horde of hostile aliens. Outside of the b-movie Earth Defense Force games I’m yet to find a franchise that’s been able to load each level with quite so many squishy enemies to defeat. And it’s here that Serious Sam 4 shines brightest.

There’s nothing quite as exhilarating as charging headlong into a 1000-strong army of Mental’s alien goons while dual-wielding miniguns. This is especially true as the core shooting mechanics, while not on Doom’s level, are very satisfying. Each attack carries weight and the development team have done a stellar job with the enemy death animations. A single well-timed blast of the double barrel shotgun will cause a fireworks display of blood and torn limbs to go flying across the map.

An old school reliance on health and armour pickups, minus any form of health regeneration also forces a similar high risk, high reward strategy to id Software’s recent efforts. The addition of online co-op also makes the battles all the more fun, especially when playing with a friend on one of the higher difficulties.

However, after the first half of the game, cracks start to appear. At first the problems largely stem from the lowbrow writing. Being blunt, like Duke Nukem and Shadow Warrior, Serious Sam’s tone and sense of humour has always been very much of its time. For people that still appreciate Beavis and Butthead’s special brand of comedy this won’t be a problem.

But for many younger gamers the dialogue will quickly become fairly jarring. On more than one occasion I cringed when Sam’s team start misogynistically reminiscing about “that time he [CENSORED] one of the game’s female NPCs on the [FOR THE LOVE OF GOD WHY DID THEY THINK THIS WAS FUNNY] in one of the series’ previous installments. It’s outdated, lazy and crass; only serving to highlight exactly how behind the times Serious Sam 4 really is.

Related: All the facts on the Xbox Series X 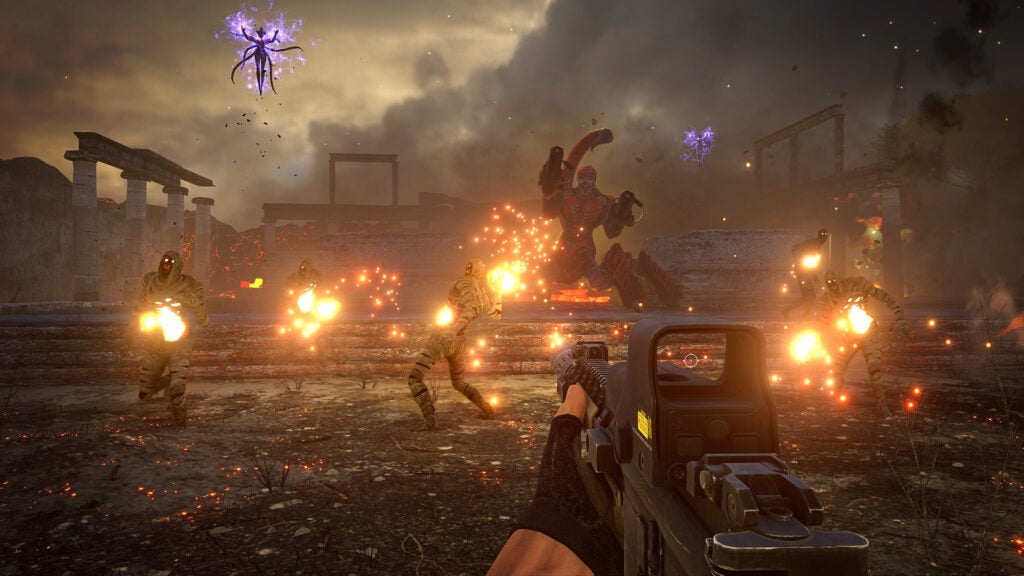 After this you’ll rapidly start spotting other parts of the game that haven’t aged all too well. The level design is functional, and there’s plenty of variety to the environments, but after a while there’s no getting around the fact it’s very formulaic and distinctly flat compared to other modern shooters.

There are plenty of wonderfully distinct enemies to take on, including series staples such as Headless Kamikaze, Beheaded Rocketeer, plus brand new enemies like the frantic Processed, repulsive Belcher and Zealot berserkers. But their AI is very, very basic.

Every enemy has a lazy scripted attack that it doesn’t deviate from. At first the sheer volume of foes does a good job masking this, but once you’ve nailed the flow of their attacks and figured out the best weapon to use against them, things get a little mechanical. Within the first few hours my early 2000/90s shooter muscle memory had returned and I was getting through most fights with basic circle strafing and back peddling with very little effort, even in later levels.

This makes Serious Sam 4 feel like a solid set of bones with very little meat. I can’t help but wish the developer had taken a page out of a modern shooter’s book and added at least a few new ideas to the tried and tested formula. Doom and Doom Eternal succeeded because they built upon their existing foundations with bold new ideas. Shadow Warrior 2 brought the series forward by adding a loot and mission system. It was these additions that made both feel like great, modern games, not the ghosts of a bygone era.

Should I buy Serious Sam 4?

If you’re a golden oldie looking for a retro shooter to sink your teeth into Serious Sam 4 is worth a punt. It nails enough fundamentals to offer a fun and rewarding arcade experience, sadly this doesn’t distract from other ailments of mediocrity.

A tired sense of humour and a lack of innovation compared to contemporary shooters holds it back from being the sequel some might be hoping for, but hardcore fans will still find a lot to enjoy here.