Sen.se makes affordable smart sensors including the ThermoPeanut, GuardPeanut and the SleepPeanut. All of these sensors work with the Sen.se companion app. The SleepPeanut, as you might expect, is all about monitoring your sleep overnight.

The SleepPeanut simply slips between your mattress and your sheet and tracks your movement and body temperature overnight in a less obtrusive way than a wrist-worn sleep tracker.

However, while the SleepPeanut is inexpensive at €29/£25, the level of data capture is far less in-depth compared to that delivered by many wearables – ultimately this makes the device neither particularly insightful nor as reliable.

While it might have peanut in its name, the design of the Sen.se’s various sensors have far more in common with Amazon’s Dash buttons. Importantly, the SleepPeanut is very low profile, meaning you don’t notice it when slipped underneath your sheets. The Princess and the Pea this is not.

The sensor feels well constructed, so I wasn’t worried about crushing it during my slumber, either. There’s a slight indentation on one side of the sensor, which is in fact a button used to silence the integrated alarm.

Setting up the SleepPeanut requires you to download the SensePeanut app for iOS or Android and pairing with the sensor over a Bluetooth Low Energy connect. You can also assign a name in case you have multiple Sen.se sensors and you’ll be asked to update the device’s firmware, which doesn’t take long. 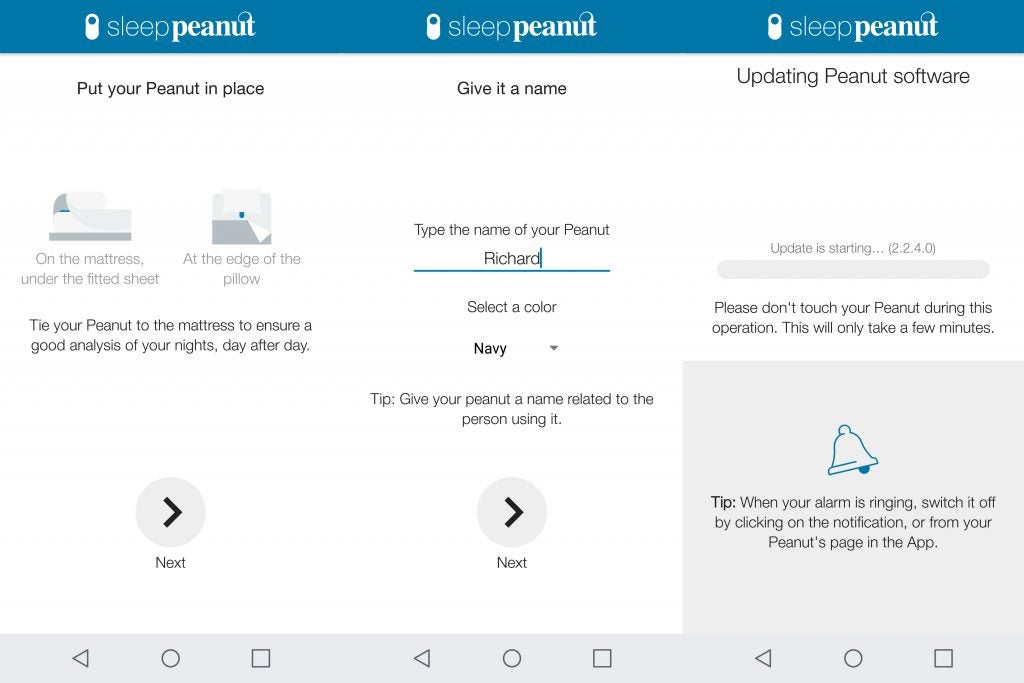 After this, you just need to set up a sleep profile by detailing your intended sleep schedule for weekdays and the weekend, as well as your ideal sleep duration.

With that done, simply slip the SleepPeanut between your sheet and mattress, about shoulder height – and then largely forget about it. The CR2032 replaceable watch battery should last three months before needing to be replaced.

Using your prescribed intended sleep schedule, the app can send you a notification reminder for when it’s time to go to bed. Supposedly, it also uses this to more accurately track your sleep.

However, in use I found this didn’t help much. During testing I was also wearing a Fitbit Alta HR, which in my experience has been great at sleep tracking, especially with its updated Sleep Stages functionality.

Comparing the two readings, the SleepPeanut generally performed well when it came to deciding upon the time I’d fallen asleep and woken up on nights where these two readings were very definite – meaning I went straight to bed and got out of bed immediately upon first waking. 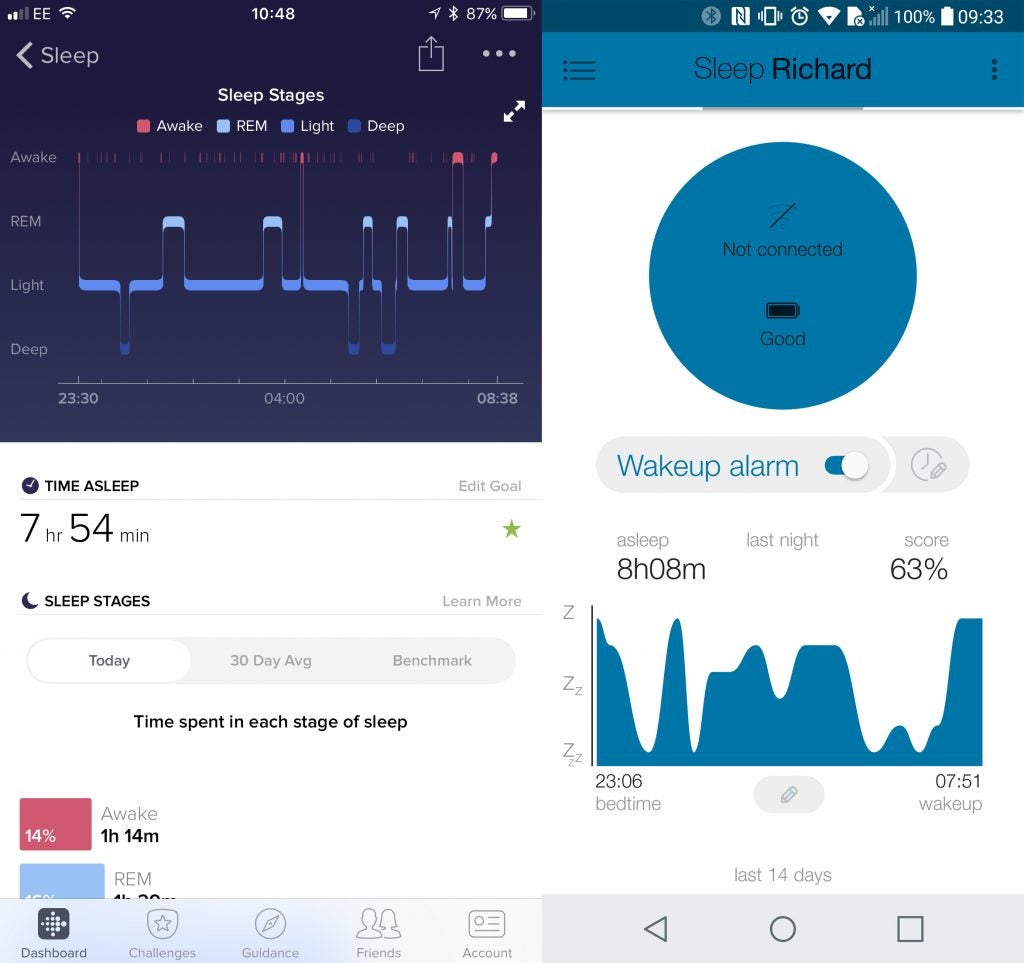 Fitbit on the left, SleepPeanut on the right

But on mornings where my girlfriend wakes up earlier for work, which in turn wakes me up temporarily, the SleepPeanut didn’t do so well. It would fail to track the additional hour or so of sleep I’d squeeze in after initially being awoken. Something that wasn’t a problem for the Fitbit Alta HR, which just tacked on my additional slumber.

The other frustration is that you can’t interrogate any of your historical sleep data. The app will display sleep duration and sleep score percentage for previous days, but you can’t then view the graph showing your sleep through the different sleep phases. You can only see this for the previous night.

While the sleep score percentage is meant to give you an indication of your overall sleep quality (where 100% is better), not being able to go back and view the graphs is limiting. 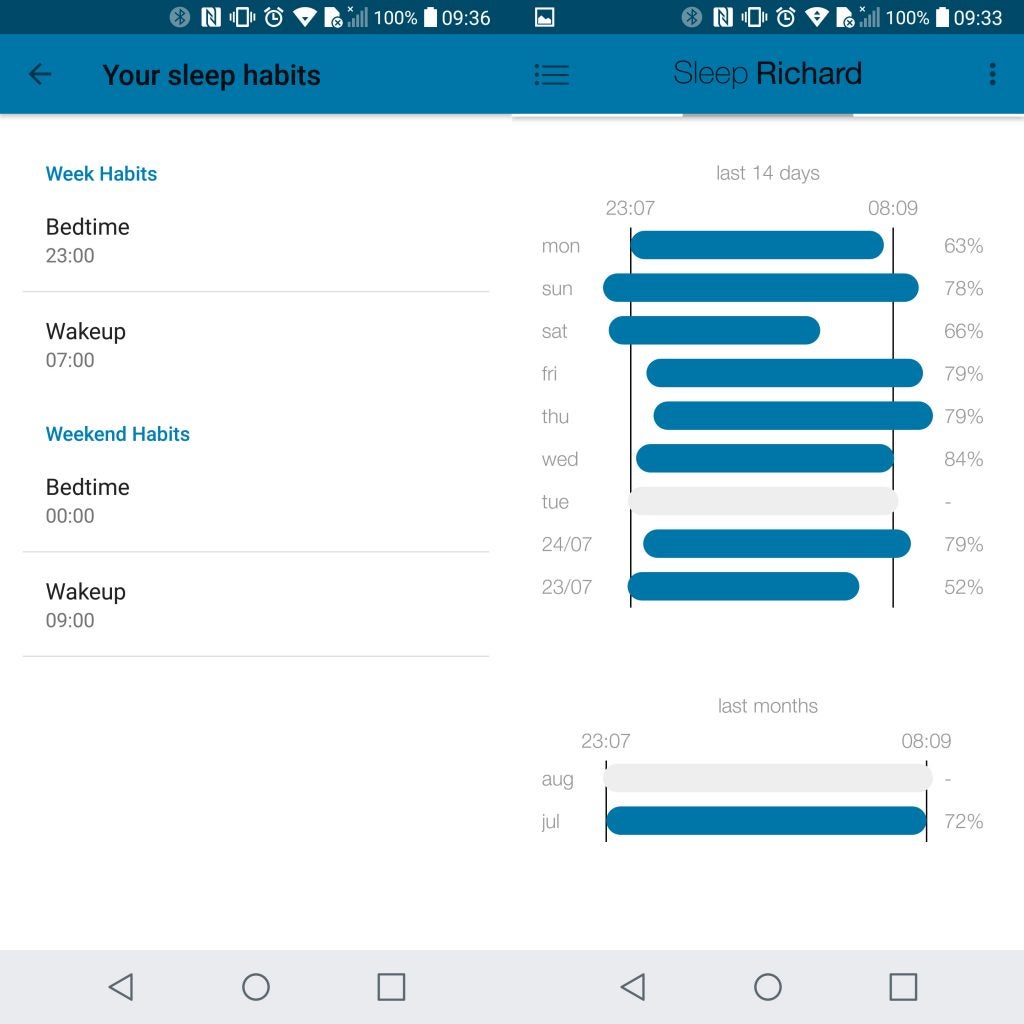 The way that your sleep graphs are displayed are also more difficult to interpret compared to Fitbit’s implementation, which uses different colours for each stage.

Then there’s the issue of incorrect data. On one night, my girlfriend went to sleep much earlier than I did. No doubt with the full width of the bed at her disposal, she most likely took full advantage and rolled over to my side of the bed, temporarily triggering the SleepPeanut as she did so.

For this reason, the SleepPeanut decided I went to sleep an hour earlier than I actually did, giving me erroneous data. This is a scenario that obviously won’t be an issue with a wrist-worn sleep tracker. The other advantage of a fitness tracker is that the use of a heart rate monitor – if they have one –provides far deeper insight into your sleep cycle. By using your resting heart rate, they can more accurately detect your sleep stages.

The SleepPeanut has a smart alarm feature, which is designed to wake you up at a less disruptive time. There’s nothing worse than being pulled back into reality from a deep sleep stage. This is meant to wake you up as early as 30 minutes before your set alarm clock, depending on the stage of sleep you’re in. 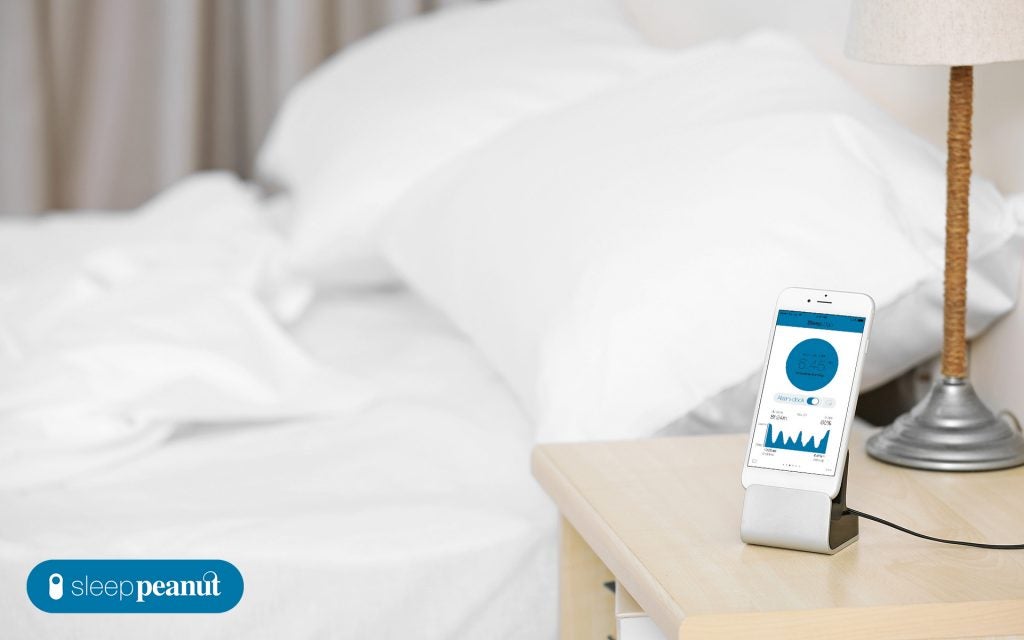 However, during 10 days of testing, my alarm pretty much went off at the defined time each morning, leading me to believe this feature wasn’t working properly. You can either have your paired smartphone sound an alarm, or you can use the integrated alarm inside the sensor, which can potentially wake you up without disturbing your partner.

However, it does mean scrambling around trying to find the sensor under your sheets to turn it off, which at least does cause you to become a little more alert. A little like those alarm clocks that roll away and hide.

It’s a shame that the SleepPeanut’s readings weren’t more accurate and that I couldn’t get the smart alarm to function properly. Otherwise, its low price and discreet nature could have been a decent selling point for a basic sleep tracker that you can forget is even there. Otherwise it’s simply too basic and fiddly, even for the price.

I’d recommend investing in one of the more basic fitness trackers. In my experience both the Misfit Ray and Fitbit Flex 2 did a good job of tracking your sleep, as well as having the added bonus of daytime activity tracking. Then, of course, there’s the Fitbit Alta HR I compared the SleepPeanut against, which offers more insight than the Fitbit Flex 2, while – admittedly – costing more.