What is the Sennheiser SP 20 ML?

The Sennheiser SP 20 ML is something we don’t see very often: a conference-call speaker. It isn’t of the size you’ve probably come across at work, though; it’s a small disc designed to offer much better speaker calls than your phone.

It’s ready to be plugged into a PC or Mac, too, designed to record meetings or hold Skype-style calls from your computer. Don’t expect it to act as a mini hi-fi for your laptop or phone, though. It will have a go, although iit doesn’t come close to having the power or sound quality of the best wireless speakers at the price.

At £109, it’s offers a fair deal for those looking for an omnidirectional hands-free unit, whose focus is to make voices clear in less-than-perfect conditions. However, it doesn’t have wider appeal outside of this niche. 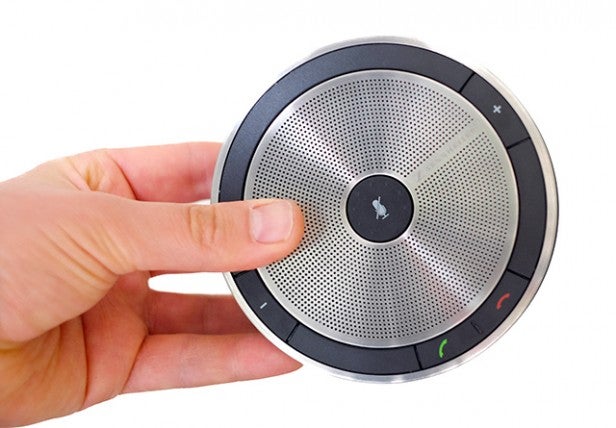 The Sennheiser SP 20 ML is a small disc housing a number of microphones and speakers. It’s 3cm thick, and has a diameter of 110mm. While you won’t be able to fit it into your jeans pocket, it won’t take up too much space in a bag or desk drawer.

Speakerphones aren’t the most desirable of tech devices, but Sennheiser has tried to give the SP 20 ML a shot of style. The top is covered by a metal grille that’s a little fancier than it needs to be.

Elsewhere, it’s all-business. The buttons up top are clearly labelled, there are non-slip pads on the underside of the unit, and the 3.5mm/USB cables used to connect the Sennheiser SP 20 ML snake around its sides. 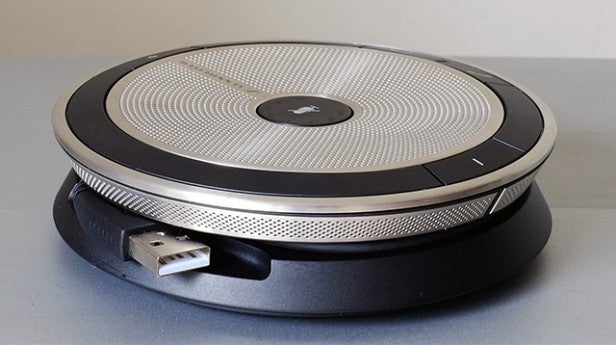 One of the more contentious elements of this speakerphone is that it’s all-wired; for this price, you may have been expecting Bluetooth. Instead, you hook it up to either a phone or tablet with the 3.5mm jack plug or a Mac/PC using the USB cable.

Plug in the USB and no drivers are required. You can use the SP 20 ML as you would a soundcard, with it automatically acting as a recording and playback device in all apps. The HeadSetup app will get the buttons on the device working fully, but it works only for Windows, not OS X.

When microphones are built into so many portable speakers these days, you may question the point of the Sennheiser SP 20 ML. Well, it’s designed to cope much better with less-than-ideal mic situations, such as a noisy office.

It does this using multiple microphones and smart software – and it works very well.

To test its abilities, I recorded the output from the Sennheiser SP 20 ML in a variety of conditions. I walked around it and into different rooms, recording in environments with and without ambient noise. 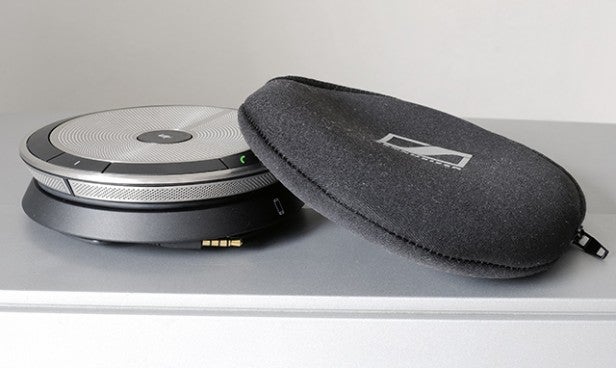 The Sennheiser can record sources from all sides without issue, and also cleverly maintains the volume level of the main speaker even if the voice of the speaker trails off into the background.

Its approach to noise reduction is interesting, too. Rather than using an aggressive noise gate to automatically kill all low-level noise, it looks to identify the main sound elements it needs to promote, and ensures they’re much louder and clearer than lower-level sound.

This avoids that odd sense of talking to someone in a total vacuum, which is often the result of more invasive noise reduction systems. The Sennheiser SP 20 ML does have its limits, though.

When there’s a noise bed, you’re slightly limited in how far away you can be from the unit before it starts to label your voice as part of the background noise. It’s far better than a “dumb” mic setup, though. As long as your voice is louder than whatever else the SP 20 ML can hear, your voice will come across clear.

It’s on the other side of the exchange where the Sennheiser SP 20 ML is only adequate. It has a fairly small driver, one designed to make speech clear, sensibly enough.

While louder than a phone speaker and the drivers of most Windows laptops (MacBooks have rather good speakers), the Sennheiser SP 20 ML doesn’t offer the sound quality or volume you’d be looking for from a unit to take on your travels to use in the hotel room. There are far better, cheaper options available for such scenarios, such as the Pure Voca and Jam Heavy Metal.

This is a speakerphone, not a speaker. In that capacity it offers good battery life, promising 20 hours’ use following a single charge – although the battery is needed only when using a phone, since the SP 20 ML is powered over USB.

The final point to note is that while the SP 20 ML makes calls clear, if you want to record a podcast then you’ll get much better-quality audio from a couple of Samson Meteor USB mics. The Sennheiser SP 20 ML displays good clarity, but just passable fidelity. 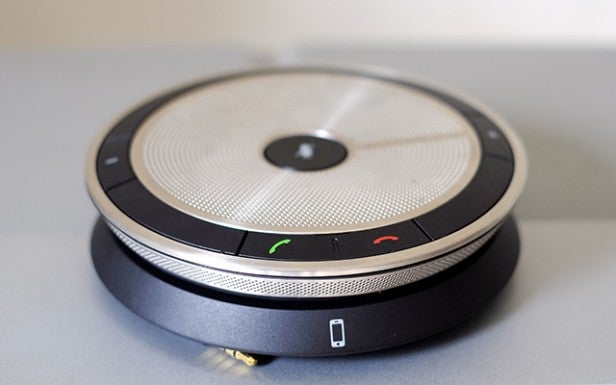 Should you buy the Sennheiser SP 20 ML?

The Sennheiser SP 20 ML is a business device with a lifestyle edge. It’s a much better conference-call speaker than your average Bluetooth box with a built-in mic, and is small enough to be convenient for meetings away from the desk.

However, it isn’t the sort of product that will appeal to those after a multi-purpose device, even if Sennheiser sells it as such. It doesn’t offer the sound quality to work well as a flat-out speaker, and its omission of Bluetooth is a little dated.

It handles its core responsibility well, however.

A rock-solid speakerphone, but probably not one for those after a speaker too