What are the Sennheiser RS185?

The Sennheiser RS185 are wireless headphones, but quite unlike the sea of wireless sets you’ll see elsewhere. They don’t use Bluetooth, but a bespoke RF system that offers much better range and an uncompressed audio stream.

That’s right, these are ‘hifi’ wireless headphones. The Sennheiser RS185 are strictly for use at home as the headset talks to a dock that needs to be plugged into the mains, but if that’s what you’re after I’d recommend this pair over a Bluetooth set any day.

At £269.99 you can get better sound if you go wired, but that’s always the case. If wireless is a must, these need to be near the top of your list. 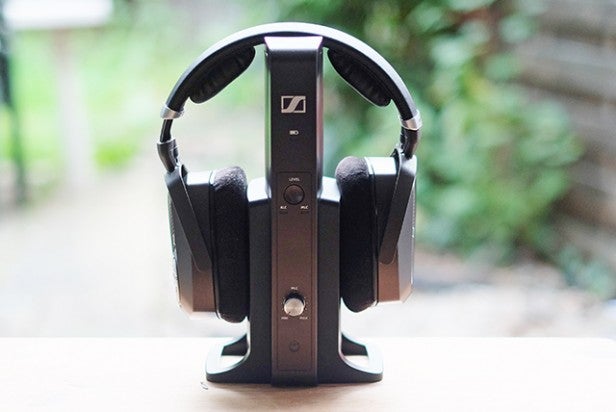 Most wireless headphones are designed to hook up with a phone. Not the Sennheiser RS185. They’d much rather be plugged into a home cinema receiver or a hifi.

The Sennheiser RS185 come in two parts, the dock and the headset. The dock acts as a charging unit for the headphones, and also takes a wired connection from whatever source you want to use.

You have a choice of optical or phono inputs. Digital or analogue: take your pick. Sennheiser has been making this kind of wireless headphone for years now, but it’s still very rare among headphones in general. Radio frequency sets like this just aren’t ‘in fashion’ like Bluetooth ones. 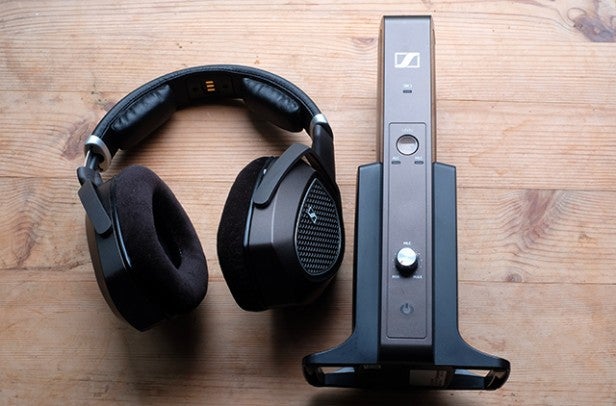 They’re for a totally different audience, though. The Sennheiser RS185 are for audio or home cinema enthusiasts who want wireless. They’re rather like a (mostly) wires-free equivalent to the Sennheiser HD 598.

The headset is full-size, encompassing your ears with very large felt-covered pads. They’re all about comfort, and don’t care at all about noise isolation. These are open-back headphones, so are not for you if you live in a noisy house. If that’s the case, check out the Sennheiser RS195. The hardware is similar, but that pair has closed ear cups. 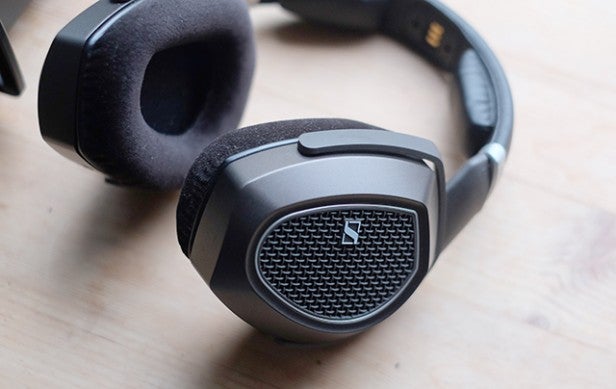 One of the initially curious parts about the Sennheiser RS185 headset is that rather than having full-length headband padding, it has just two foamy buffers that sit just to the side of the headband’s centre. For the first few minutes, it feels as though the pressure is a little too localised, but after that they sit almost invisibly on your head.

I’ve been wearing the Sennheiser RS185 for hours at a time with no problem. They’re very comfortable. Part of this is down to the reasonably light plastic build.

So why doesn’t the padding extend all the way across the headband? It’s because right in the centre is a set of metal contacts that hook up with the dock to charge the Sennheiser RS185’s battery.

Sennheiser says you’ll get up to 18 hours off a charge. It’s stamina is long enough to make testing difficult, as the dock is naturally where you end up resting the headset when you’re done.

Even the way the batteries in the headset are implemented is clever. The pads twist off to reveal a single rechargeable battery in each cup. This helps keep the weighting of each side totally even. 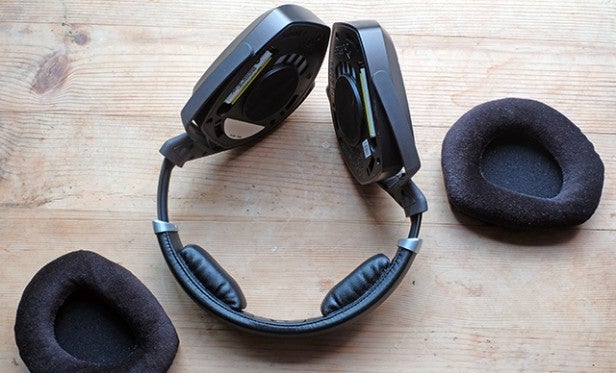 There’s no setup to the Sennheiser RS185 beyond plugging-in the source cable. The headset comes already-paired, and you can even add a secondary set to the same dock if you like. The dock also has a volume knob, although when set to the ALC (auto level control), this is handled automatically.

On the headphones themselves you get controls that also change the volume and the L/R balance. Thanks to the way the wireless works, there’s no control over playback. 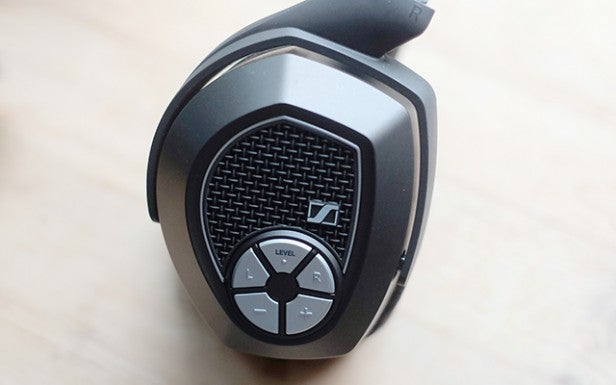 The Sennheiser RS185 take a ‘dumb’ audio signal then use RF to deliver it uncompressed to the headset. As long as you’re in range, the feed is just about perfect.

I experienced none of the glitches you can often get with Bluetooth headphones even at short range. The spec list also suggests the Sennheiser RS185 have far greater range that Bluetooth: 100m.

Of course, that’s when there’s a clear line of sight between the dock and the headphones. I tested the Sennheiser RS185 in a normal house, with walls and connected gadgets that might interfere with the 2.4-2.48GHz band the connection operates on. 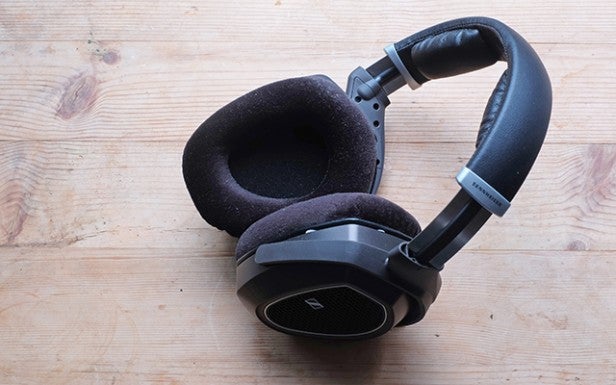 I got to 10-15m away before the signal started breaking up, transmitting through one floor and a few sets of walls. That’s significantly better range than Bluetooth, but don’t expect them to work from one end of a mansion’s ground floor to the other, and up several floors.

Those with ‘normal-size’ houses can wear them between rooms happily enough. I certainly did.

The whole point of the Sennheiser RS185 is that they get you better sound quality and comfort than most other wireless headphones. Sure enough, they deliver for the most part.

An open-back design gives them a nice sense of scale, so that even with a healthy dose of bass on tap they don’t ever seem bogged-down. There are a few different sound ‘styles’ to be heard in Sennheiser’s fairly expansive HD series of headphones, and the Sennheiser RS185 are among the ‘darker’ sets. 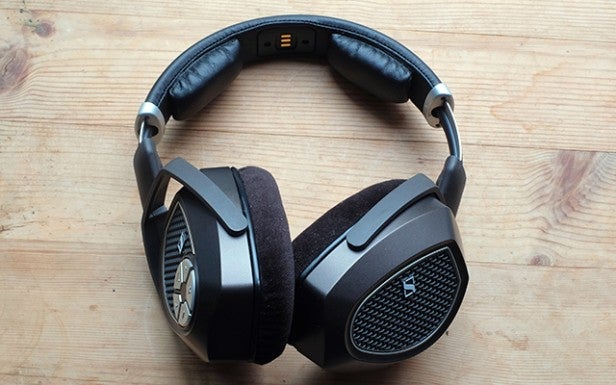 The sound is somewhat thick and rich, not bright and uncompromisingly precise. They are not wireless equivalents of the AKG Q701, that’s for sure.

A low-distortion sound also means you can turn it up pretty loud without it feeling as though they’re doing any harm to your ears: watch out for that.

While I’ve not heard them for a while, the sound style is quite similar to Sennheiser’s classic HD 650. It’s high-fidelity sound, but without the sort of tone that’s out to reveal detail and nothing else. Detail is good, but Sennheiser balances that with a pretty full-fat tone.

The one part that could be improved is the discipline of the bass. It could be a bit more taut. However, even this can seem a bit harsh when you think the Sennheiser RS185 only cost as much as the Sennheiser Momentum 2.0 while also packing-in an impressive RF wireless system. 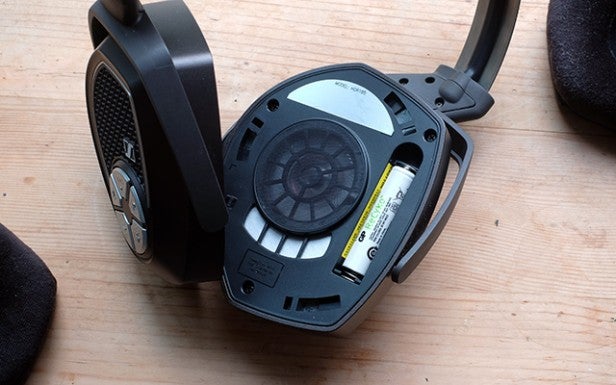 Should I buy the Sennheiser RS185?

The Sennheiser RS185 are fairly similar to the RS220 I reviewed years ago. The sound, the wireless transmission style and the design are all comparable. However, battery life has radically improved from 8 hours to 18.

Of course, if you’re going to use them for 2-3 hours at a time, that barely matters.

The Sennheiser RS185 don’t really need radical improvements, though, because they have so few quality rivals in this area. Sony offers a few pairs still, but as I haven’t reviewed them yet we can’t vouch for their quality.

As is ever the case with wireless headphones, you can get better sound quality for the same price if you ditch wireless. The AKG Q701 and Sennheiser HD650 are better bets if you’re going to sit a few metres from your source at all times.

However, I won’t lie: that the Sennheiser RS185 let you wander about the house with a set much more comfortable than just about any ‘portable’ wireless set isn’t to be sniffed at.