Wireless headphones like the Sennheiser RS 220 face several problems. Most are compromised on several fronts, tending to be more expensive, less reliable and sound worse than comparable wired sets. Sennheiser’s new set bucks the trend, though, offering sound quality on-par with the HD series’s big names, and much greater flexibility than a wired set. Quite simply, these are some of the best wireless headphones ever made.

The Sennheiser RS 220 package comes in two main bits. There’s the chunky headset and the plastic dock. In true Sennheiser style, the dock is a practical piece of kit rather than something to sit proudly in your lounge as a prized ornament, but it is rather special in its own way. 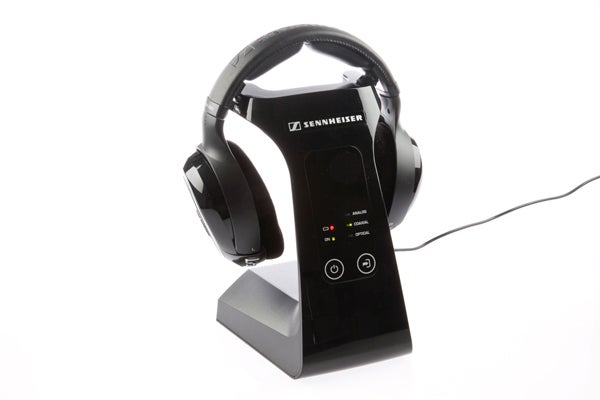 But first, the looks. Its front is glossy black plastic, and the rest textured matt plastic. Using plastic throughout keeps the weight below 500g, but as something that doubles up as a largely static headphone stand, a bit of extra weight could have been a bonus, along with a natty metal of wood finish. There are, however, a quartet of little rubber feet on its bottom to keep the thing in place.

The dock’s front bears two touch sensitive controls that turn the set on and of, and switch the input. Being able to handle multiple inputs is where the Sennheiser RS 220 really starts to impress. On the backside of its base is a healthy selection of connections – stereo phono, optical and coaxial – and there are LEDs up front to show you which is connected. Each type of connection offers both an input and output, letting the dock function as a pass-through for when you’d rather use a traditional amplifier and speaker setup. 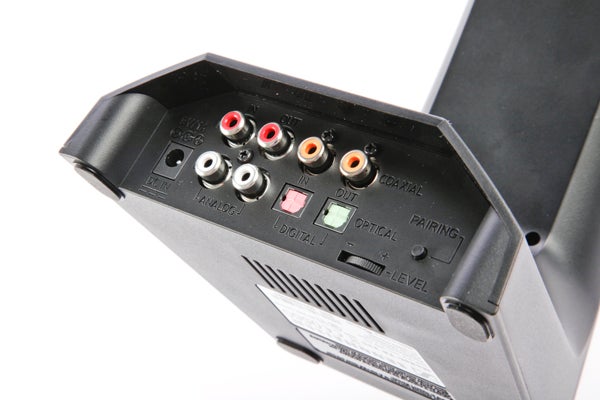 There’s no down-mixing of surround content though, and you do have to keep an eye on what you pump through it, but the dock negates the need for a separate headphone amp. And when desktop headphone amps of note start at £50-odd quid and ramp up into the thousands, this is a very good thing. There’s a basic cog-style volume control on the back to handle the base’s volume level.

The Sennheiser RS 220 also has a very clever approach to battery charging. A rechargeable 800mAh AAA battery slots into a hidden cavity at the top of each earcup, and they start charging as soon as you put the headphones back on the charge dock. There are little metal contact panels on each side of the headband that match -up with corresponding metallic bits on the dock. 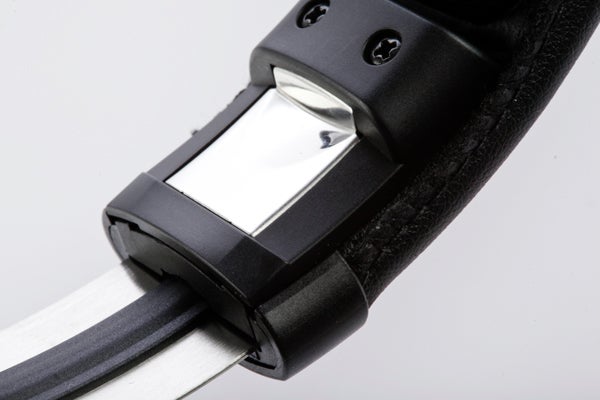 Metal contacts interface with the dock

Battery life is not stellar at 6-8 hours, but unless you’re a fan of very, very long listening sessions, you’d never know. Using standard AAA rechargeables has a few other benefits too. They’re reasonably light, leaving the headset at a comfortable 329g, and are extremely easy to replace. 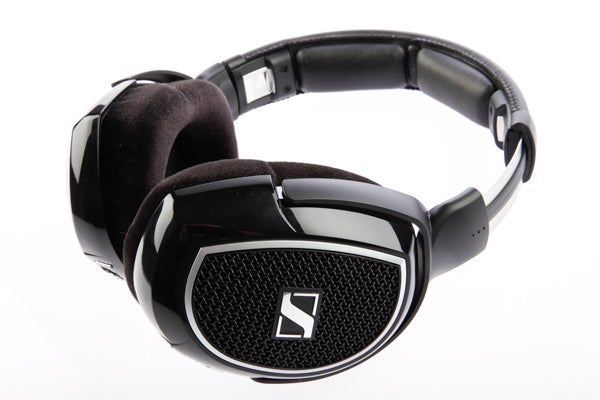 The actual headphones look a little different from some previous RS-series wireless sets, with less-rounded rear grills, but they are otherwise similar. They use an open-back design and have extremely comfortable velour pads. Both these design choices are great for comfort, keeping your ears cooler than closed-back, leather-padded sets, but make the RS 220 leak noise like crazy. 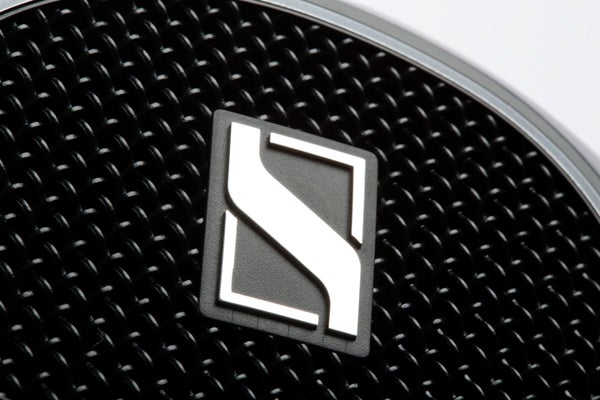 If you want to rock out to Rachmaninov but don’t want your pianist-hating partner to know, the Sennheiser RS 220 aren’t for you. For those who live in quiet environments with cohabitees that won’t mind the leakage, they’re a delight. Superbly comfortable, well-made and practical, given you can dump them on the dock once you’re done.

Most wireless headphones use Bluetooth as their streaming tech of choice, but the Sennheiser RS 220 use a 2.4GHz digital system instead. Sound is transmitted uncompressed to the headset and the range is fantastic – Sennheiser claims it’s up to 100m, and while that’s cut down hugely inside, it’s enough for any house we’re ever likely to own.

The signal is transmitted over the same bandwidth as Wi-Fi, but we found only very occasional interference occurred, and then only for a fraction of a second. Wireless performance in these headphones is excellent. 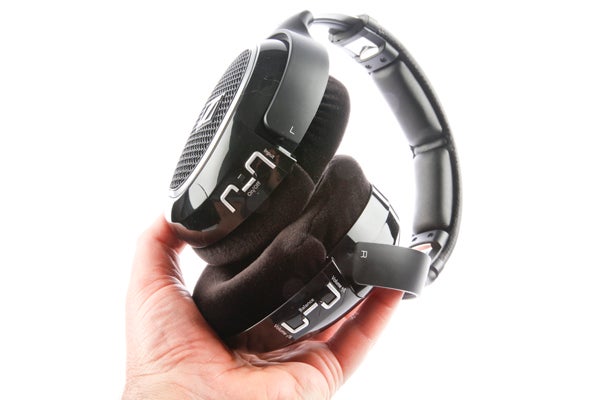 Long range is made all the more useful by the on-can controls of the RS 220. A trio of plastic silvery buttons sit on the underside of each ear cup, which is where your thumb naturally rests when you bring your arm up to your ear. The right buttons control volume and balance, the left input and power on/off. They are very quick to respond too – although the action of them could be a little crisper. 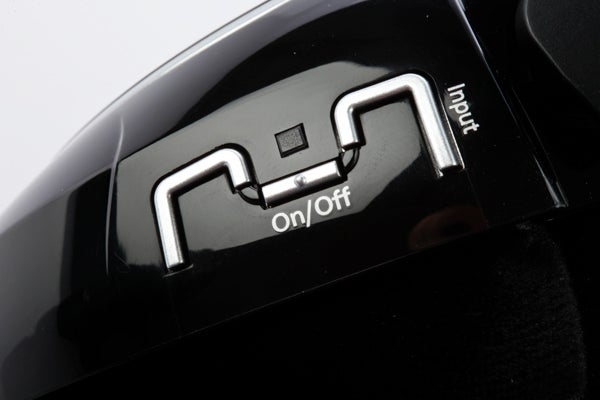 Using a proprietary wireless system, the Sennheiser RS 220 are deliciously simple to setup and get started. There’s a pairing button on the back of the dock, and holding down the power button of the headset puts it into pairing mode too. Once paired, you only need to make sure both the dock and headset are switched on to get streaming working. 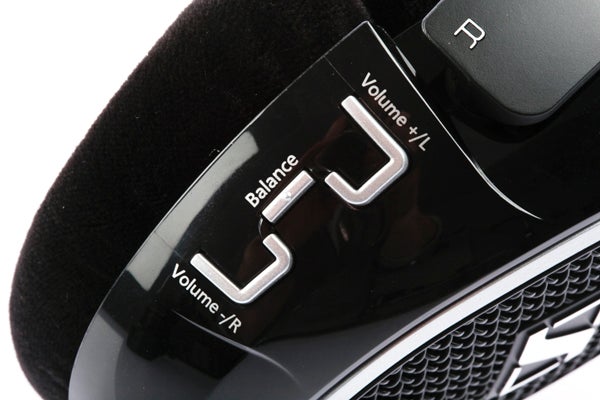 The sonic personality of the Sennheiser RS 220 is comparable to the middle players in the HD range – like the Sennheiser HD 650 and HD 600. Their open design provides a very open, wide sound signature that makes music and movies sound expansive and lush. Although the sound doesn’t have the analytic clarity of something like the AKG Q701, top-end detail is good – and has the pleasant smoothness of the HD 598. The Sennheiser RS 220 sound is warm and relaxing, and adept at relaying the subtleties of lighter music.

Bass is generous, silky smooth and fairly tight, letting them cope well with the demands of beat-based electronic music. However, they can’t quite muster the attack and power of closed back alternatives – like the Sennheiser HD 25 – or less laid-back open headphones. This becomes most evident in rock music. 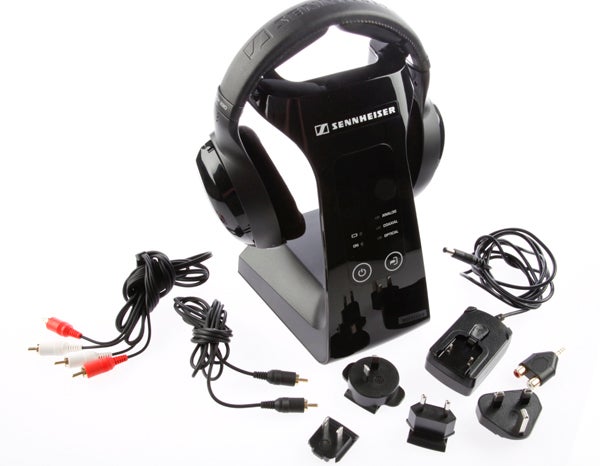 Plenty of accessories are included, including international adapters

Given Queens of the Stone Age’s Songs for the Deaf, the wide and warm style starts to work against these headphones, stopping them from creating that level of excitement the album’s capable of. It’s a return of the boxy mid-range we noticed in the RS 170 – and it’s a Sennheiser trademark. That said, they make Homme’s sound fantastic, and show up the times the music plays with the stereo make-up like few others. And just as the sound doesn’t encourage excitement in aggressive music, that warmth can help give explosions in movies all the more impact.

If you prefer a sound that’s lush and expansive rather than forward and aggressive, you’ll find the Sennheiser RS 220 very easy to get on with. Their use of wireless is excellent, with a versatile dock and impressive range. With so few high-end wireless headphones available in the UK, they’re simply one of the best wireless pairs money can buy right now.

Verdict
A great implementation of uncompressed wireless music streaming makes the Sennheiser RS 220 the best wireless headphones we’ve tried in a long time. The relative wealth of selectable inputs and outputs mean they’ll fit perfectly into most people’s setups too. Sound is wide and open, though a little too warm and laid-back for some tastes. But overall they are another win for Sennheiser.