There may be years of your life where there’s no need for a set of full-sized wireless headphones, but there are other times when a good pair is the wisest investment in audio that you could make. Sure, a full 5.1 or 7.1 surround speaker system is the ideal for home cinema, but if you live in a flat or a mid-terrace house, running it at full-bore isn’t always practical. Similarly, it’s hard to beat a proper, full-scale Hi-Fi setup, but what do you do when you want to listen late at night and the rest of the family is trying to get some sleep? A set of corded headphones is fine, but do you really want to deal with 3m of cable trailing between the TV set or amplifier and the living room sofa?


It’s no coincidence that several people I know who have become dads in the last few years now swear by their wireless cans. It’s the only way they get to watch the movies they want to watch at the volumes they like to watch them without waking up the kids (or getting an earful from their worn-out other halves). 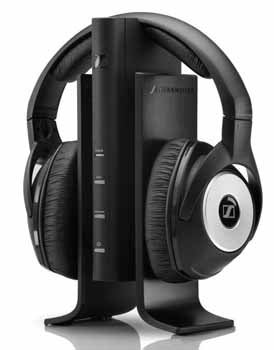 Sennheiser is a big name in this market with its RS series, to which the RS 170 we’re looking at today is a recent addition. In fact, it’s one of three models Sennheiser launched at the tail end of last year, the others being the mid-range, closed-back RS160 and the high-end, open-backed RS180. There’s some good reason to get excited about these new models. While the previous headphones in the RS range – the RS120, RS120 and RS140 – transmitted sound over an FM radio connection, the new headphones use a version of Kleer’s 2.4GHz digital wireless technology, as also found in Sleek Audio’s excellent W1 Wireless IEM adaptor.


Why is this good news? Well, FM stereo – as still used in most full-sized wireless headphones – needs tuning before it works, is prone to background hiss and interference, and compresses the sound in the same way that commercial FM radio signals do. Even if you’re listening to a CD, the effects of the transmission technology mean that you’re not really listening to CD quality audio.

Bluetooth would seem a viable alternative, but – again – the digital stream has to be compressed to deal with A2DP’s limited bandwidth, most frequently into a Bluetooth specific format, SBC. Again, this means that while you might be putting CD quality audio into the transmitter, you won’t get CD quality audio out. What you do get is perfectly fine for the vast majority of mobile users, but if you care enough to spend £150 plus on headphones, you probably don’t want to make any compromises.


Kleer’s 2.4GHz technology is different. Firstly, the signal is uncompressed. The signal you put in is the signal you get out. Secondly, being digital, and thus less susceptible to interference, there’s virtually no hiss or interference. Finally, there’s no need to fiddle around with different FM bands or manual tuning. The headphones arrive synched with the transmitter, and other sets can be added simply enough should you need to later on. 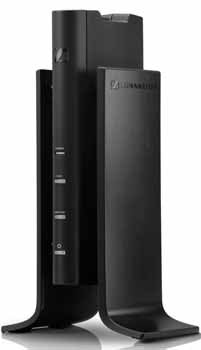 In short, it just works, and that goes for the RS 170 setup just as it did for the Sleek W1 adaptor before. The link seems to function flawlessly and the range is excellent, with the headphones receiving a mostly solid signal in every room of my medium-sized detached house, and outside for fifteen metres or so in the front garden too. I’d take the claimed maximum 80m range with a pinch of salt – it’s sure not to take walls, floors and intervening objects into account – but within a domestic environment or office, you shouldn’t have too many problems.


Better still, when the sound does break up there’s no ear-splitting crackle or buzz; just a break in the music which creeps back in to one earpiece and then the other when you’re back in range or whatever blocked the signal is removed. Basically, it’s not just wire-free, but hassle-free, too. It’s also worth mentioning that up to four pairs of headphones can be teamed with a single transmitter, though I’ve yet to find a UK stockist for the HDR 170 headset on its own.

Thumbs up for the wireless tech, then, but what about the headphones? Well, the RS 170s are exactly what you’d expect from Sennheiser: a solidly-constructed, well-designed and comfortable set of cans that you can use for hours at a time without irritation. The circumaural (around the ear) cups are attached via two pivoting joints to a single adjustable headband, and a close but not vice-like fit ensures they stay on without placing your skull in a migraine-inducing death grip. There’s generous padding inside the headband and around the ears and, while the cans are mostly made of plastic, they don’t feel cheap or easily breakable. If you’ve ever tried Sennheiser’s HD59x series, these won’t feel unfamiliar at all.


The transmitter/charging cradle has had a redesign since the RS120/30/40 series, and it’s now a more streamlined black affair, with a simple three pin charge point at the top where the headphones hang, which connects to three strips inside the headband. Apart from the socket for the miniscule wall-wart power adaptor, the only connection is a single 3.5mm jack, though Sennheiser bundles a 3.5mm to 3.5mm cable, a 3.5mm to 6.3mm adaptor and a phono to 3.5mm adaptor which you can use to take audio direct from an amp, DVD player, Blu-ray player or games console as well as a TV, Hi-Fi system or MP3 player. 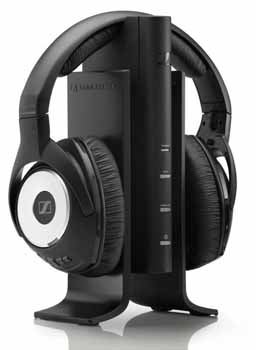 The two rechargeable AAA batteries – one inside each ear cup – take around 16 hours to charge and will last for around 24 hours, though your mileage will vary depending on range and volume levels. As it’s natural to place them back on the charging cradle at the end of a session, this isn’t that much of an issue anyway.


The headphones themselves have five buttons; on, volume up, volume down, and toggle buttons for the Surround-Sound and Bass-Boost processing options. You can check whether the last two are activated by looking at the LED indicators on the front of the cradle which also double as buttons to activate the two functions. Both are pretty self-explanatory, and while the surround sound function isn’t as convincing as the more advanced processing you’d get from a Dolby Headphone setup or Creative’s CMSS 3D technology, it does provide a wider, more enveloping soundstage which helps give movies a powerful, immersive feel.


On first listening, I was a bit concerned about the quality of the sound delivered by the RS 170s. It’s great to hear a set of wireless headphones that don’t suffer from hiss like the old RF and FM models, yet can be used without line of sight (the bugbear of the old Infra-Red based Sony systems). However, despite showing Sennheiser’s usual excellent grasp of detail, the sound was a bit brash and top-heavy, and not really ideal for music or movies. After only a few hours of settling in, however, things improved dramatically. The RS 170s are engineered for home cinema over Hi-Fi, but that doesn’t mean they fall down when it comes to playing CDs, FLACs and MP3s.

The closed-back design does a great job of shutting out the outside world, though a small amount of sound leaks out, and also ensures a decent bass response, which you can always beef up with the bass boost. I’ve heard more articulate and well-defined low-ends before, but the RS 170s handled poppy electronic tracks from Royskopp and small group jazz from The Bill Evans trio equally well, and there was no shortage of raunch when I switched to rockier material from Soundgarden, Led Zeppelin and Pearl Jam. The mid-range sounds ever so slightly boxed-in, but there’s plenty of detail there and in the high-end.


If you want a pair of headphones that can reveal intakes of breath and other subtle nuances in a vocal performance, then the RS 170s won’t let you down. And if the sound isn’t as open or revealing as you’d get from Sennheiser’s HD595s, it’s certainly more so than you might normally expect from closed-back headphones. Even a spot of Wagner’s Gotterdammerung, with layer upon layer of strings, brass and woodwind piled on, didn’t faze the pair. 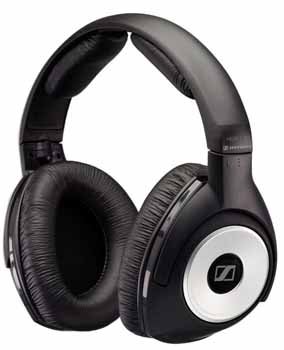 The RS 170s’ home cinema focus gives a definite advantage when it comes to playing big action games or watching blockbuster movies. Turn the sound on the TV or amplifier up then adjust the volume on the headphones to your comfort level and you’ll get dynamic, punchy soundtracks with great definition and effective placement of effects across the stereo range. The opening bank heist from The Dark Knight gave the RS 170s plenty of room to demonstrate their chops, with the ballistic effects rattling out with real impact. It’s a great set for games, too. A few hours spent on the excellent Battlefield: Bad Company 2 proved that the RS 170s don’t struggle with crammed, chaotic soundscapes, and as bullets ricocheted, walls collapsed and gas tanks blew up all around me, the Sennheisers put me square in the centre of the action, with plentiful supplies of crash, bang and wallop.


There’s an awful lot to love about the RS 170s, and very little to dislike. In fact, my one complaint would be that the volume controls are hard to locate by touch alone, and that you have to remove the headphones to change it. This, I think, is pretty small beer, and when set against the excellent sound quality and wireless performance, not worth worrying about. Sure, the RS 170s are three times as expensive as some budget wireless headphones, but to my mind the premium price is just about worth it. Think of them as a long-term investment, giving you your music and movies as you like them, and the rest of your household a spot of peace.


Sennheiser’s RS 170 headphones offer a potent combination of practicality and audio quality while avoiding the traditional pitfalls of their peers. Whether you’re after some late-night home cinema or some music while you’re doing the chores, these are amongst the best wireless headphones around.