I was thinking of beginning this review with a plug for Sennheiser, a company that has quietly been producing top quality headphones for many years, but rarely seems to grab the limelight. But every review I’ve ever seen seems to do that, so I won’t. Oh, I did already? Never mind.


It’s not as if the glowing comments aren’t well-deserved. In fact Sennheiser is probably the only name anyone without an unhealthy interest in the headphones market would be able to give you if you asked them to name a company producing high-end headphones. 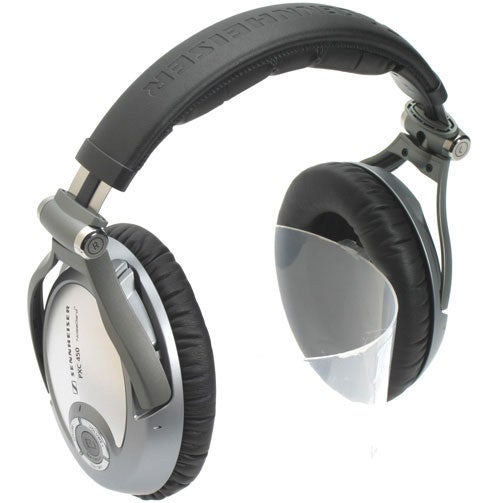 It’s hardly surprising considering that, while the budget end of the headphone market is swamped with companies, Sennheiser’s main competitors in the high-end space number only three or four. And most of these are hardly household names – AKG, Grado and Stax are the main ones that come to mind, certainly for on- or over-the-ear headphones.


This is where the firm’s latest product unashamedly sits – firmly at the high end of the market – and with a price to match. Its PXC 450 noise-cancelling cans will set you back anything between £180 and £300.


They’ve certainly got a quality feel to them. As soon as you open up the box with its posh, magnetised flap, you know that you’ve purchased some serious gear. The headband and circumaural earcups (the kind that sit over and around your ears) are wrapped in luxurious soft leather and are beautifully softly padded. The chunky hinges and headband, underneath their luxurious cladding, are constructed of hard-wearing steel and aluminium. The cable feels thick and hard-wearing and can even be replaced should you ever trap it in a closing car door. The whole set has a pleasing, industrial feel to it, like a pair of luxury, high-tech ear defenders. 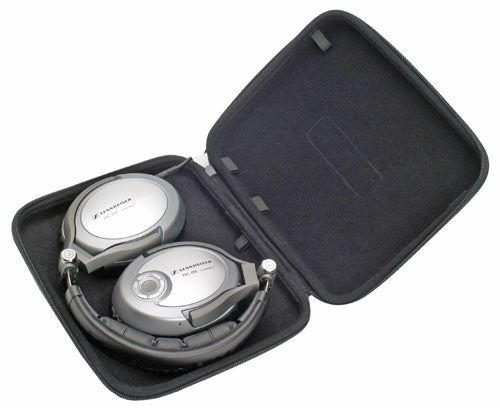 It’s hard to believe it but Sennheiser is actually marketing these as ‘travel’ headphones. To this end the cord they come with is relatively short at 165cm (not long enough for hi-fi listening) and there’s an aeroplane adaptor included in the box. I suppose the real giveaway is the noise-cancelling facility, aimed at reducing the thrum of aircraft engines and air-conditioning, but despite all this, there’s no getting past the fact that these are seriously big headphones and heavy to boot. It’s just as well they fold flat – but even then, stowed away in the semi-hard case supplied, they’ll take up a fair bit of room in you bag.


Portability issues aside, these headphones work very well in their intended environment. The active noise-cancelling technology is Sennheiser’s latest – NoiseGard 2.0 – and works by monitoring exterior sound with microphones and counteracting that with ‘anti-sound’, or phase-inverted sound. The blurb on the box claims that they are capable of cancelling out up to 90 per cent of exterior sound, though I’d say that’s a pretty hopeful claim.

That’s not to say the noise cancelling is ineffective – far from it. In fact it seems to filter out sound very well, killing off most low frequency rumbles and hums completely, while thinning out all other noises. This means that, while you don’t get the total audio block-out that a pair of ear-canal noise isolating phones will give you, you do get a very pleasant listening environment, even when there’s a right racket going on outside.


I tested it out in the most extreme of environments – on London’s noisiest underground route, the Central Line, roaring through the tunnels between Liverpool Street and Oxford Circus – and I was still able to listen comfortably to quiet classical music without having to crank the volume up to eardrum bursting levels. Standing right next to a six-lane motorway in an attempt to simulate the noise on an aeroplane, and the noise cancelling worked even more effectively, reducing the constant rush and clatter of traffic to a gentle whisper. 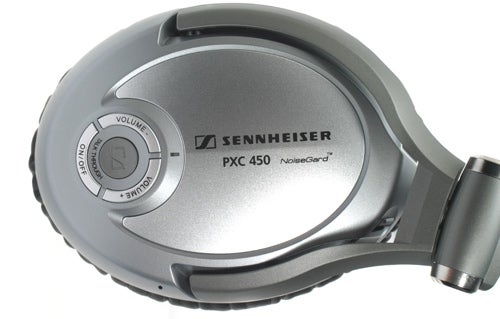 As a bonus, the PXC 450 uses its microphones for another handy purpose – and sports a really useful feature called TalkThrough. Hit a button on the right hand earcup, the music is muted and sound from the outside world is piped into your ears, so you don’t have to yank them off to order a drink from the air hostess, or to hear others talking to you. On top of that, you also get volume controls.


As its active, the noise-cancelling also needs power to work properly and this is supplied by a single AAA battery, which slots into a compartment in the right hand earcup and provides about 25 hours of listening. Unlike Bose’s Quiet Comfort 3, however, Sennheiser’s PXC 450 can be used as normal headphones if you happen to run out of juice mid-flight – a big bonus. And the circumaural design of the earcups do a pretty good job in their own right of keeping unwanted extraneous noises at bay, anyway. 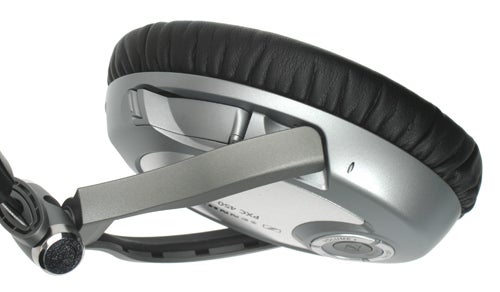 Comfort-wise, these headphones are a joy to wear, as you’d expect. The first time you slip them on, it’s like sliding behind the wheel of a luxury car. You feel pampered and at ease, though you do have to position them carefully to prevent the protruding driver inside each earcup from rubbing on your ears. It’s also worth noting that they’re not ideal for extended use in hot temperatures, and can get quite uncomfortable in hot, sweaty air-conditioned environments.


You’d also expect, at this sort of price, stonkingly great performance and to a certain extent this is the case. They’re certainly better than anything you can buy for under a hundred quid, and noticeably so. But as you move beyond that level, the differences are much more difficult to nail down and your personal likes and dislikes will come to the fore. So feel free to take some of the following comments with a grain of salt and go and try a pair for yourself.

The first thing to say about these headphones is that they are capable of incredible clarity. The sense of detail you get from wearing these headphones is nothing short of stunning. You can almost hear Peter Nordahl’s fingers on the keys of his piano as he accompanies Lisa Ekdahl singing Stranger On Earth. The attack on Pat Metheny’s guitar in Map of the World creates a delicate yet punchy sound and here you can hear his fingers sliding up and down the strings. With vocals, the performance is just as accomplished. Close your eyes and you can imagine Cerys Matthews belting out Streets of New York right in front of you. 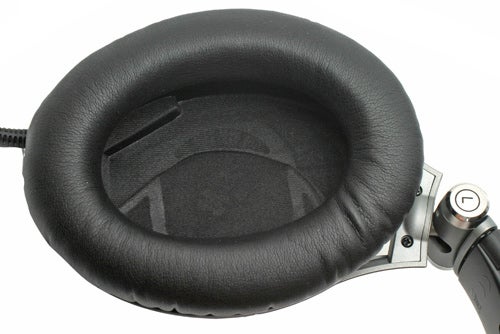 But don’t expect the bass to rattle the teeth out of your head. Though the PXC 450’s frequency response goes right down to an astonishing 8Hz – that’s lower than most high-end hi-fi subwoofers – it isn’t overemphasised and can seem quite lean at times. Don’t get me wrong, there’s plenty of well-defined, realistic-sounding bass here (just the way I like it), it’s just that it doesn’t get up and smack you in the face. This is particularly noticeable on action film soundtracks, where gut-rumbling explosions are more often than not the order of the day.


I took the time to break the phones in, leaving them connected to a music source on looped playback for a couple of nights overnight, and the bass did fill out. But it didn’t get to the level that some music and movie fans will be looking for. Switch on the noise cancelling and sound becomes even leaner. Those closed back earcups, though quite effective at reducing sound leakage, also contribute to a sound that occasionally comes across as a bit boxy and enclosed, in a way that open back and ear canal phones just don’t. 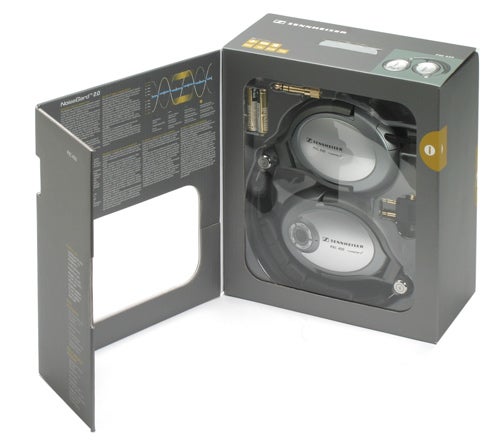 Finally, it’s worth commenting on the fact that these headphones aren’t particularly easy to drive, and this is an important consideration if you plan to use them mainly with an MP3 player. In order to make them compatible with aircraft audio systems the PXC headphones are set at a relatively high 150 ohms (with the noise cancelling switched on the impedance is higher at 750 ohms). They’re set this high to ensure compatibility with aircraft systems, but this does mean that they won’t go as loud as a pair of standard heaphones. And despite a sound pressure rating of 108dB per milliwatt, which is more than my Shure E2C noise isolation phones are rated at, in practice they simply didn’t generate the same volume levels.


Sennheiser’s PXC 450 is, without doubt, a first-class pair of headphones. They’re supremely comfortable, the noise-cancelling works extremely well, the clarity, detail and frequency response are simply superb, and the talk-through function is a really useful bonus. Not only that, but the build quality is second to none.


But as with all expensive audio gear, it comes down to a case of personal preference in the end. And though there’s nothing wrong with these headphones, the lack of meaty bass coupled with relatively high impedance and their sheer bulk means that they won’t be everyone’s cup of tea.