Some companies by their very nature demand that little bit of extra respect. Sennheiser is just such a company, and its reputation has been earned not through eye catching marketing or design, but simply by producing high quality products again and again over a long period of time.


As such when this Sennheiser headset arrived in the office it was of significant interest. This, the PC166 USB, represents the very best of the Sennheiser’s gaming headset range and features its own USB soundcard, as well as a noise reducing microphone. It has supposedly been developed with the assistance of pro gamers; though in and of itself this is hardly a claim I’d place much faith in. I’d sooner trust the experience of a Sennheiser engineer than some guys that just happen to have the dedication and sheer motivation to be very good at playing games.

Unpacking the set the first thing you’ll probably notice is how incredibly long the cable is. In total it measures three metres, and is long enough that you’re more likely to have problems with it being too long than too short. Thankfully, there’s a cable management system provided that allows you to wrap any superfluous cable around an oval shaped accessory that has slits for fastening the cables and a clip for attaching it to your clothing. It’s a pretty essential addition, especially since not using it can result in some annoying entanglements.


Other neat features include a small removable clip that’s useful for attaching the wire to your shoulder and away from your arms, while there’s also inline volume control and a mic on/off switch. At the end of the cable are two 3.5mm stereo jacks for both the headphones and microphone, while the USB adapter features sockets for each. As a result you can use the headset with or without the USB soundcard, which will please those who have splashed on expensive soundcards for their home PCs. 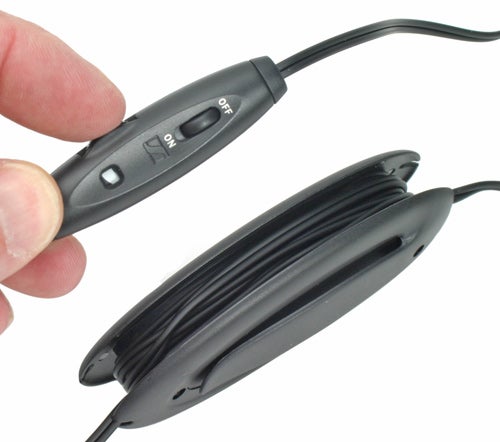 The USB adapter is, however, a critical factor and one which makes this set ideal for LAN parties and other events where you’re not using your own equipment. This ensures consistency and eliminates the possibility of distortion and interference from lower quality on-board sound devices. Using the USB soundcard is certainly preferable to using on-board audio, providing a high level of clarity. It won’t, however, ever replace high quality dedicated hardware and the default volume of the USB adapter is noticeably lower than a standard soundcard.


The headset itself is binaural, with the cups sitting on your ears rather than around them. Everyone has their own preference, but though I generally prefer headphones that surround the ear this set still proved to be very comfortable. Each of the cups is mounted on hinges so they adjust to your head, while the foam padded headband is suitably cushy. Both cups can also be adjusted vertically to match the size of your head, and the mechanism strikes a nice balance between being secure enough to not move involuntarily while not being too stiff to adjust either.

As one might expect, these Sennheiser’s feel very well made as illustrated by the microphone which has a supremely smooth and steady hinge mechanism. It’s a shame though that it isn’t detachable. This rather restricts the potential alternative uses, and though one could use the set with an MP3 player one could hardly imagine sitting on the train and not looking just slightly silly. But, given this set is intended for gaming, it’s hardly worth giving this disappointment too much weight.


Once you start using the PC166s one can immediately appreciate the clarity and general quality of the sound produced. Most parts of the musical spectrum are well handled, with a particularly nice balance between the mid and high low range. Bass, however, isn’t quite as impressive. Though the overall sound is warm and bass well defined, the low range isn’t quite as pronounced as it could and ought to be with a distinct lack of punch and power. 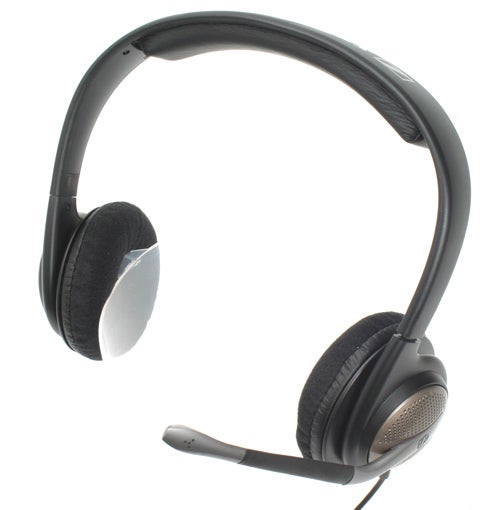 What the set does do well, however, is creating a good sense of immersion and this becomes more apparent when watching films or playing games. In the case of games this means being able to quickly identify the location of potential positions/direction of incoming fire, enemies and other hazards. Here the set excels, producing subtle sound effects with a high level of clarity and accuracy.


But, while audio performance is generally very good, it’s the microphone that really impresses, combining superb clarity and impressive noise cancelling to ensure you can be heard by your team mates. Unlike the microphones on cheaper headsets which are often too quiet and rather muddy, the volume and clarity provided by these Sennheisers is nigh on faultless. Consequently, whether you’re gaming or Skpye calling, the Sennheisers won’t let you down. 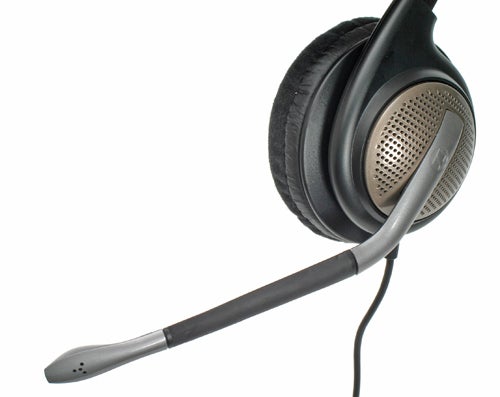 Indeed, the only real barrier to getting this set is the price. Overclockers UK are currently selling them for £58.74 inc. VAT, which is a superb price. But this is by far the best price I’ve found, and elsewhere you’d be hard pressed to find them for less than £60, some retailers are even selling them for £90 to £100. Even the Sennheiser PC165 USB which, by all accounts is identical, will set you back at least £80. At the Overclockers UK price I wouldn’t hesitate to recommend this set, but for £70 or more the choice is less obvious. As a result if you can snap these up at the current price then do so because it’s a complete steal, but if paying more the choice isn’t quite as clear cut.


Great design, features and performance make the PC166 USB Headset an obvious choice for the discerning gamer that requires the very best. Depending on price they’re great value too, though availability is sketchy at best as is pricing which varies considerably. Still, if you have the money you can’t go too far wrong.