Gaming headsets such as the Sennheiser PC 350 SE we have here are strange beasts. After all, most people prefer to not have perfect acoustic clarity when being told how well their mother performed in the bedroom the previous night by someone they’ve never met. 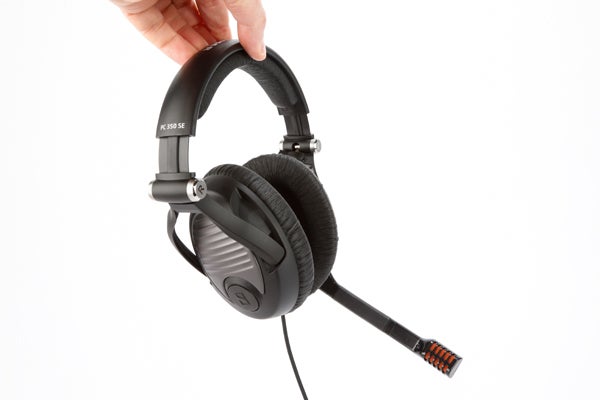 Trash-talking juvenile online gamers aside, high-end gaming headsets provide a host of benefits that can aid the avid gamer and truly immerse them in their virtual world of choice, be it a dragon-infested fantasy realm or a war-torn city. But does the Sennheiser PC 350 Second Edition headset really warrant its £170 price tag?

Next read our review of the 2014: Sennheiser G4ME One headset

Don’t expect high-end headphone design aesthetics here. The Sennheiser PC 350 SE don’t fare well compared to headphones that focus as much on looking stylish as they do on sound quality. There’s a fair bit of plastic on show too, even though it is premium quality soft-touch plastic.

The ear cups are made of a combination of plastic and ridged gun-grey aluminium, but even this looks like it might not be metal until it’s touched. Robust hinges allow the around-the-ear ear cups to fold neatly and be stored in the well-made protective carry case. 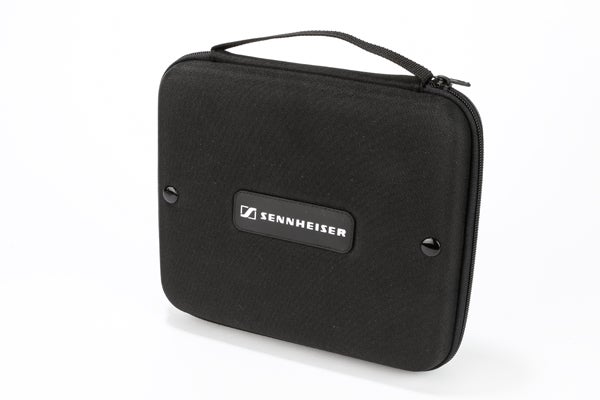 The microphone is fastened to the left cup on a thick stalk of bendable plastic. It’s brilliantly stable. Just find the perfect location for it and it will stay in position during even the most intense gaming sessions.

The mic’s party piece is that it folds all the way up so is totally out of the way when listening to music. Move the mic to a 75-degree angle and a faint click signifies that mute has been enabled, which is a nice touch. Unfortunately the microphone is not removable, which means you’ll look like a bit of a plum on the bus if you want to use the headset to listen to music on your daily commute. 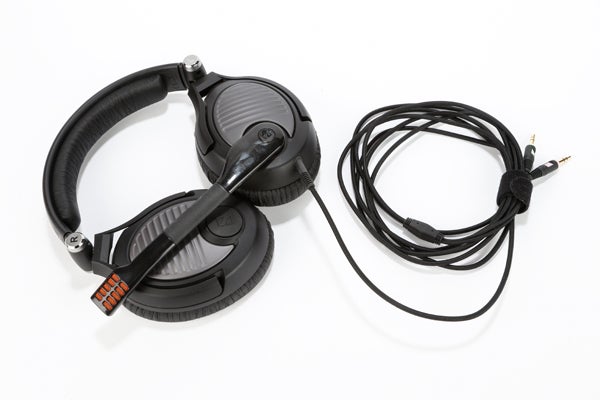 The braided fabric cable solves the dreaded cable knotting issue that plagues some headsets and is plenty long enough at 3m, ending in a 3.5mm audio and another 3.5mm microphone jack. However, the length of the cable and the lack of any type of cable management system (a small piece of Velcro really doesn’t count), does cause some issues and so you can expect to have to do a bit of MacGyvering to keep the cable the required length for your needs. 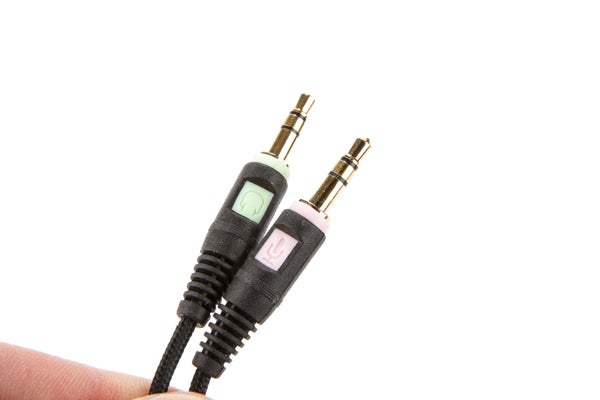 On a more positive note, there’s a nice touch on the right-hand ear cup. What looks like a simple Sennheiser logo doubles up as a volume controller. Turn it clockwise or anticlockwise and you can get it to exactly the right levels without having to looks for the usual clunky controllers found on most headset cables. 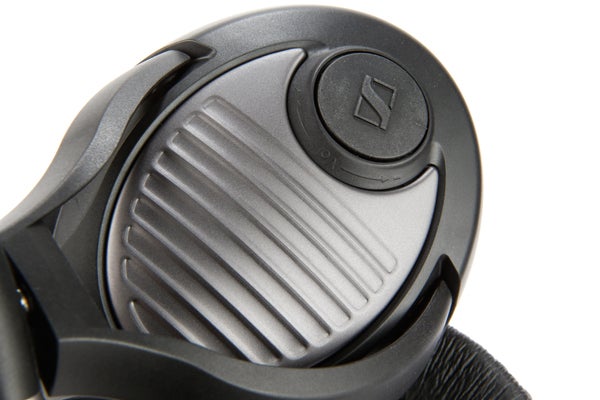 At 312g the Sennheiser PC 350 SE headset is not exactly light. Place it on your noggin though and the weight soon disappears. The ear cups and headband distribute the bulk evenly, allowing for hours of comfortable gameplay. Huge earpads made from decent quality leatherette-covered memory foam enclose you ears entirely and mould around the head. This efficiently plugs all gaps that might let sound leak.

Some might find the fit a little too snug though, and we found ourselves getting a little hot after wearing them for more than a few hours. This is a common occurrence with over-ear headsets and taking them off for a few minutes or even giving them a readjustment quickly alleviates discomfort. 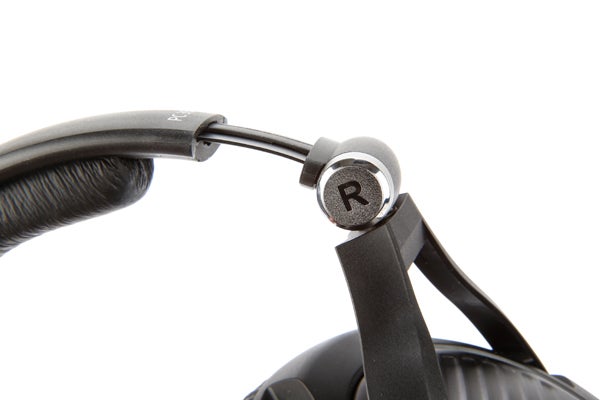 Great sound quality has become almost synonymous with Sennheiser headphones and the PC 350 SE headset doesn’t disappoint. They feature something called “Eargonomic Acoustic Refinement”. Yes that’s right, “Eargonomic”. Thankfully we can forgive Sennheiser the terrible pun because the headphones are very well balanced and bring near-perfect stereo imaging. It’s unlikely you’ll notice anything untoward while gaming or listening to anything other than hardcore trance. 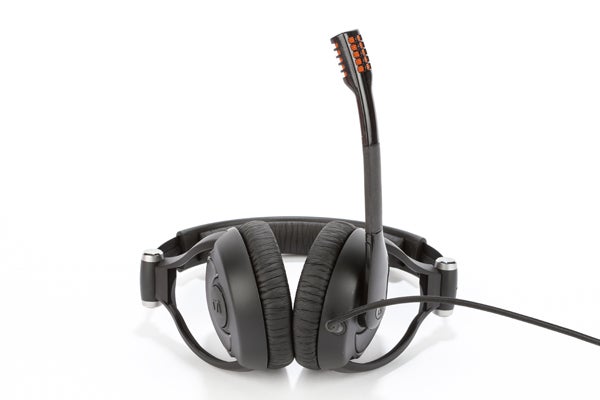 This is an analogue headset, which means your computer’s sound card will need to do all the audio processing, however the PC 350 SE behaves well even if you have a basic PC set-up. At high volumes the treble remains clear and there is absolutely no sign of rattle or buzz, even with the deepest bass.

Even though the Sennheiser PC 350 SE do not possess active noise cancelling, that the set fits so snuggly means that it does a great job of keeping out external noise. Even minute sounds of footsteps far away are still audible even with external background noise. 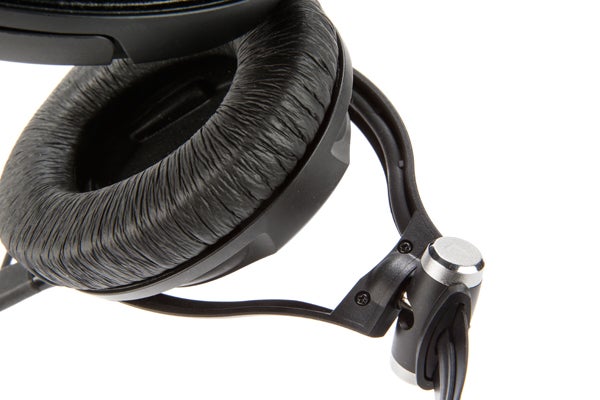 The headset coped particularly well with Max Payne 3. The loud background music sounded clear but none of the sound effects and noises were drowned out by it. Gangsters barking orders could easily be heard and their general direction pinpointed. Furthermore, the glorious explosive cacophony of Battlefield 3 was well-conveyed, leading to a very immersive experience. 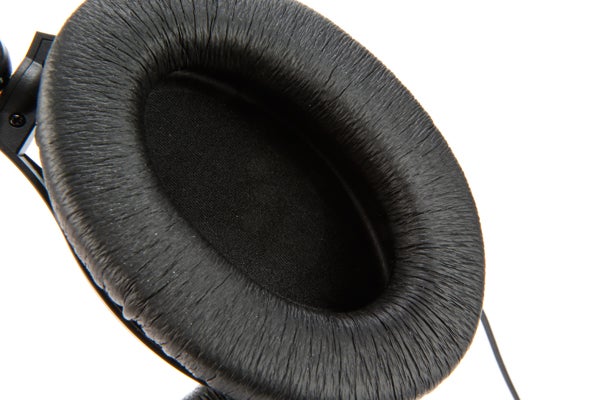 Keeping noise in can be as important as keeping noise out for some gamers. You don’t want to be annoying others while playing but you also don’t want others to potentially overhear tactics during a LAN session. The Sennheiser PC 350 SE truly excels in this regard. The closed design means almost all sound is kept within the earcups, even at very high levels.

We’ve already mentioned that the microphone can’t be detached from the Sennheiser PC 350 SE headset. Fortunately that is the only weakness in what is otherwise a superb mic. Exceptional noise cancellation means that only the loudest ambient noises will disrupt gaming companions. We had to get background noise to uncomfortable levels before the mic picked anything up. Voice transmission is crisp and clear and the boom is infinitely adjustable to get the levels just right. 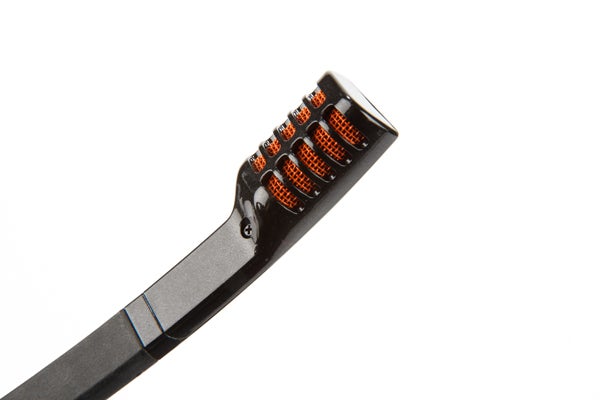 The Sennheiser PC 350 SE’s lack of removable microphone means it’s not as adaptable as it could be, and the faux leather ear-cups can get hot after a few hours of gaming. In every other respect, however, this Sennheiser headset is excellent. Audio quality and noise isolation is great and the microphone is truly special. If you’re looking for a headset which will immerse you into a game even if you’re in a noisy environment then the PC 350 SE is a great, if slightly pricey, choice.