When I go out into the countryside for a walk or cycle ride, the stupidity of sheep always astounds. They’ve been domesticated for thousands of years, yet when we walk or ride towards them on a country lane, they always stop grazing, panic and run as fast as they can in the opposite direction. You’d think, by now, they’d have learned that simply by standing still, they’d be perfectly safe; instead they risk life and limb in a headlong dash down a steep, stony path, to escape the menaces of some slow-moving, lesser-spotted British walkers.


It’s an analogy I like to apply to iPod-owning commuters. You’d think by now, after years of Apple bundling the same old horrible white headphones with the music players they’re all so enamoured of, they’d have figured out that they sound terrible. But no – sheep-like, they continue to listen completely oblivious to the fact that they’re wasting a perfectly good MP3 player on a poor pair of headphones. I’ve even heard of people who break or wear out their iPod earbuds actually paying good money to replace them with more of the same. I kid you not. 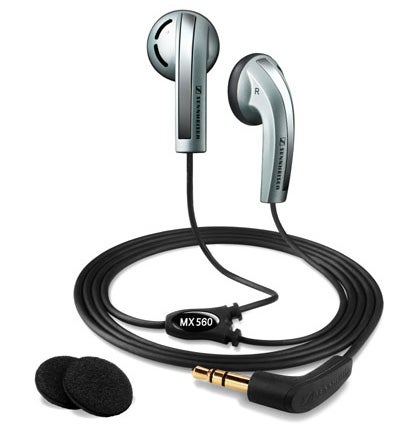 There’s really no excuse for this sort of behaviour, when simply spending £40 more on a pair of Sennheiser CX 400’s will net a pair of headphones about a million times better. But for those who just can’t bring themselves to splash out even this much, there are still plenty of decent alternatives out there. Sennheiser, for example, doesn’t only make expensive headphones; it also makes budget replacement pairs too. These MX 560 earbuds, for instance, only cost £19 – that’s precisely the amount you’ll pay to renew your ‘official’ white efforts – and they also happen to be far superior.


Of course for this money, you’re not getting all the luxury features of more expensive headphones. The earpieces aren’t made from aluminium; they’re all plastic. The cable isn’t modular; it’s just one piece. And you don’t get ear canal noise-isolation for this sort of money. But you do get a surprisingly complete package. Instead of simply throwing the earphones in a box with some foam earpads, as Apple does, Sennheiser includes a soft pouch and a neat rubber cable winder. The latter has a couple of sockets you can plug the earphones into to protect them and an inch-long tail to wind the cable around to keep it from knotting up in your pocket.


And despite the plastic construction, these headphones do feel well-constructed and well-made. There’s nothing here that makes me think it’s a candidate for breakage. The 3.5mm stereo jack is, thoughtfully, at right-angles, so when your MP3 player is sitting in your pocket there’s likely to be less strain on the audio input socket and, unlike many cheap headphones, the cables between the earpieces and the plug feel pleasingly robust.

The MX 560’s are also very comfortable in the ear. I usually don’t get on with earbuds – I find that they pull uncomfortably on my ears and make them ache after a while – but these felt fine the entire time I was listening to them. They don’t have the slightly soft rubber trim around the edge that iPod headphones do, but that doesn’t seem to matter. You’ll be able to wear these for hours on end if you want, without having to pull them out, grimacing in pain after half an hour or so. I also like the way the tails are long and slightly curved, which helps to keep them firmly and snugly in place.


More importantly than all this, however, is that, unlike the headphones they’ll be replacing (or all those sheep-like iPod owners), the MX 560’s are far from woolly. They have a full, rich sound that belies the low price tag. Sennheiser makes great play over the MX 560s’ ‘Basswind’ system, claiming thumping yet clean bass. And they’re certainly a lot better than a pair of iPod headphones in this respect – for the purposes of this review, I performed back-to-back analysis with a third generation iPod nano and its bundled white earbuds and there’s simply no comparison.

A blast of Hiromi from her outlandish album ”Hiromi’s Sonicbloom” bore this out. Its electric bass guitar bottom end is a good way to gauge not only bass quality, but also bass weight. It’s more defined, and more juicy-sounding with the MX 560’s than with the iPod headphones. Although the MX 560’s don’t produce what I’d call thumping bass – if you want that, buy a pair of Koss SportaPros or PortaPros – for the money they still sound very impressive.


Moving on to something gentler, like a touch of jazz courtesy of the wonderful Diana Krall, and the MX 560’s start to reveal their true colours. The full sound you get out of these when compared to the iPod headphones has more presence, more immediacy and more depth of sound. They’re altogether richer, and you can pick a surprising amount of detail out of a track if your surroundings aren’t too noisy. The iPod headphones, however, sound as if you’re listening with an Aran sweater wrapped around your head.


Where the MX 560’s don’t fare so well is big sounding metal or guitar rock. They have an extremely clean sound, but can sound a little dry when fed with more complex material. Metallica’s classic ”Nothing Else Matters”, for example, lacks a little drive, warmth and richness when compared to the similar priced over-the-ear SportaPros. But they’re still miles better than the Apple phones.


The MX 560’s are not the perfect headphones then, but if you’re looking for a pair to replace your knackered white earbuds, they’re a pretty good deal. You get a decent range of accessories with them, sound quality is excellent for most types and they’re very comfy to wear. My favourite budget headphones are still the venerable Koss SportaPros for pure sound quality, but if you buy a pair of these you won’t be disappointed.