Technically accomplished true wireless earphones offering lush sound, but the price is high and intuitiveness isn't what it should be.

Sennhesier’s aim was to make the best-sounding pair of its kind and, in certain areas at least, it has achieved just that. The True Wireless display the smooth and rich audio of a higher-end consumer hi-fi.

In other areas – such as the touch controls and the battery life – they’d benefit from the level of refinement found with the Jabra Elite line, however. 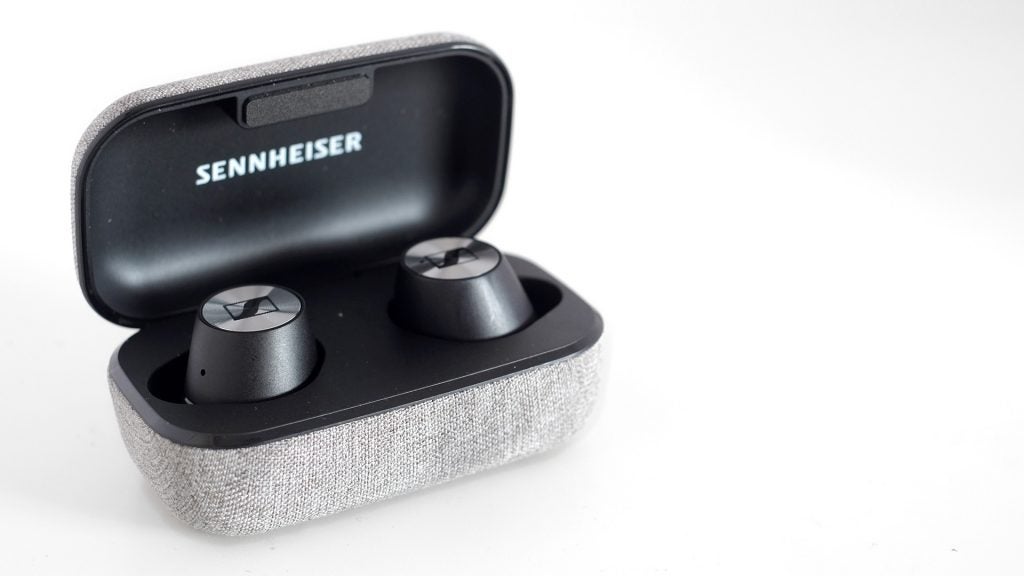 When Sennheiser enters a new area in headphones, people take notice – but these earphones are fairly conventional. In the box you’ll find the earpieces themselves and a case to keep them safe and which charges their batteries.

They are among the largest earphones in this class, far bigger than Apple’s AirPods and a little chunkier than the Jabra Elite 65T. 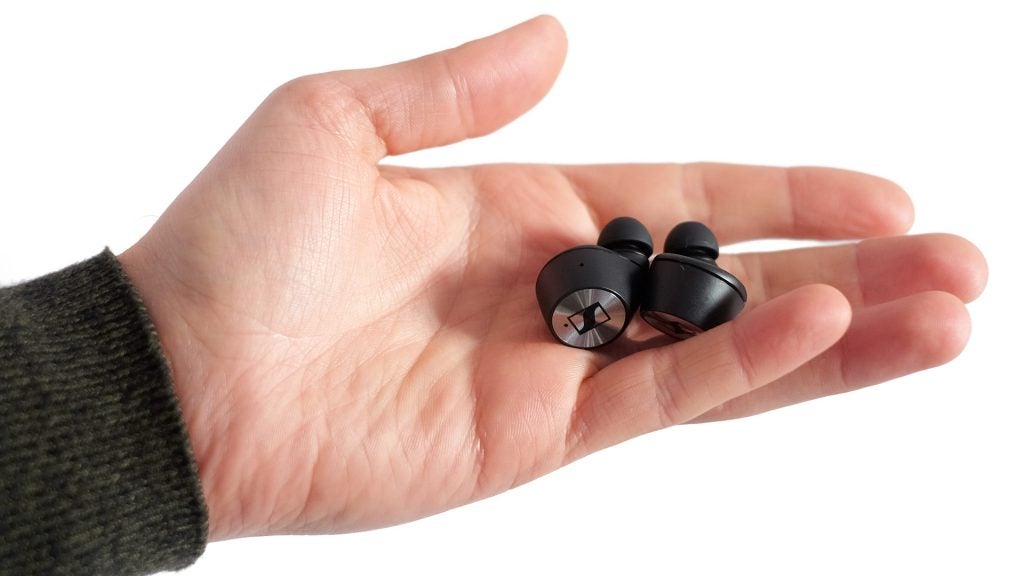 Does it matter? I find the Sennheiser Momentum True Wireless comfortable enough, and their smart design means they won’t fall out of your ears – even if worn whilst running. However, they do fill your ears completely, feeling more bung-like than most earphones.

For the case, Sennheiser has opted for a look that appears inspired by smart speakers such as Amazon’s latest Echo Dot. Sporting a grey fabric cover, it looks like a glasses’ case. Magnets set the earpieces in place. You just need to drop them into the right hole.

Of course, large earpieces mean a relatively large case. The Sennheiser Momentum True Wireless’ case isn’t as pocketable as that of the Apple AirPods or Earin M-2. 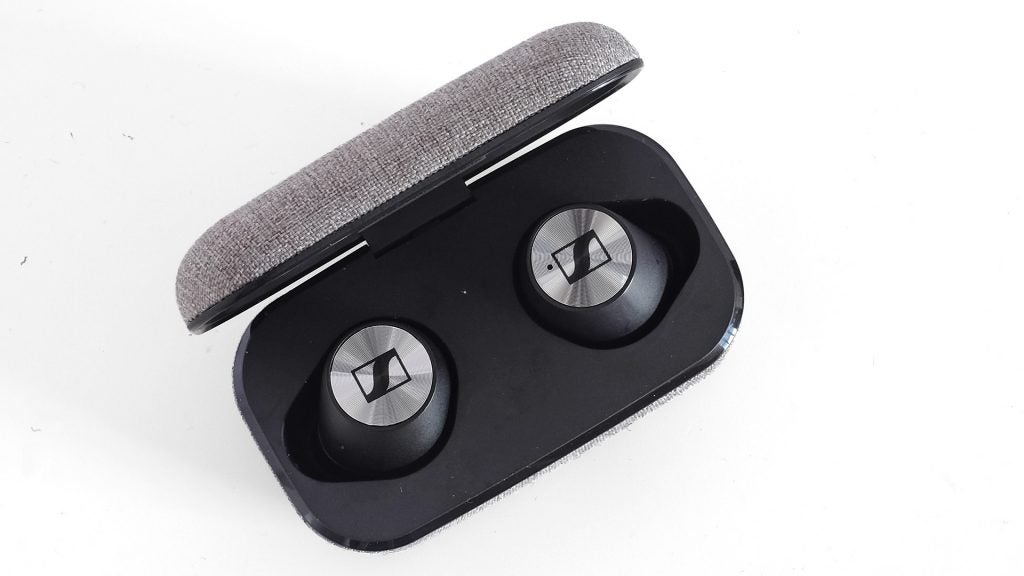 The buds themselves are largely uninspired plastic black blobs, although it’s the shiny discs on the outward face that will be visible when the Sennheiser Momentum True Wireless are in your ears.

These look like aluminium, but feel more like plastic. There are no buttons on these earphones at all; instead, these rear discs act as capacitive panels. 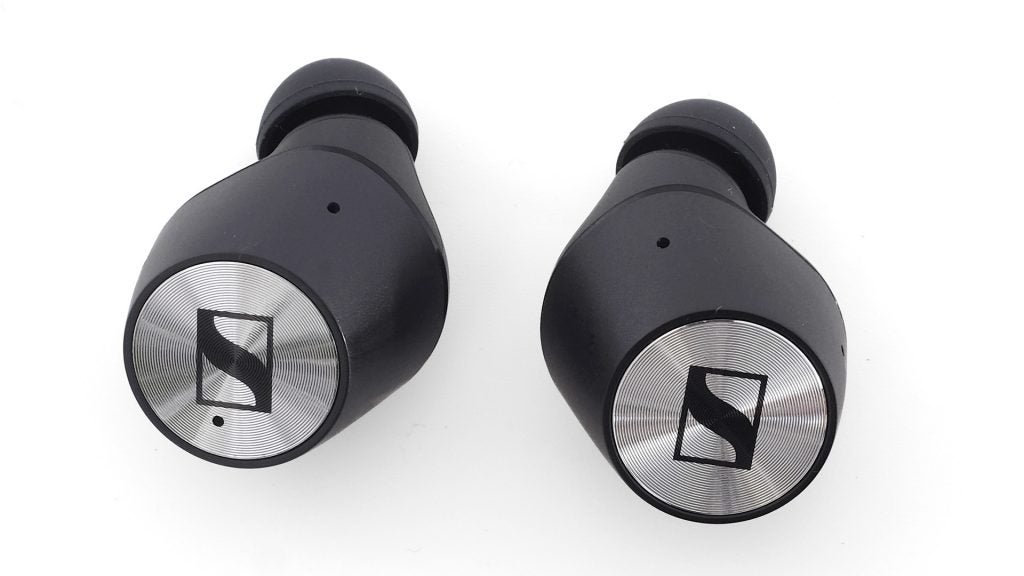 Here to make the Sennheiser Momentum True Wireless seem pure and sophisticated, the earphone equivalent of a perfume ad, the features on offer also add a strangely steep learning curve.

For example, to pair the Sennheiser Momentum True Wireless with a new laptop or phone, you have to press both earpieces simultaneously for five seconds.

Various combinations of taps and holds of the left and right earpieces change volume, play/pause, bring up your phone’s digital assistant, change tracks and turn the ambient noise feature on and off. You need to study the Momentum True Wireless, and Sennheiser expects a bit too much effort from us. Most people simply aren’t going to learn all these commands.

There’s real techy ambition here, though. The Sennheiser Momentum True Wireless have two microphones in each earpiece. By using one pointing upwards, another towards your mouth, they can use beamforming to separate your voice from ambient noise.

The Transparent Hearing feature works well, too. This pipes through a certain amount of outside noise, to let you hear what’s going on while listening to music. These “ambient aware” modes often sound rough or strange, a symptom of a fairly low-quality pinhole mic. There’s much less of a clash between the two sources here. 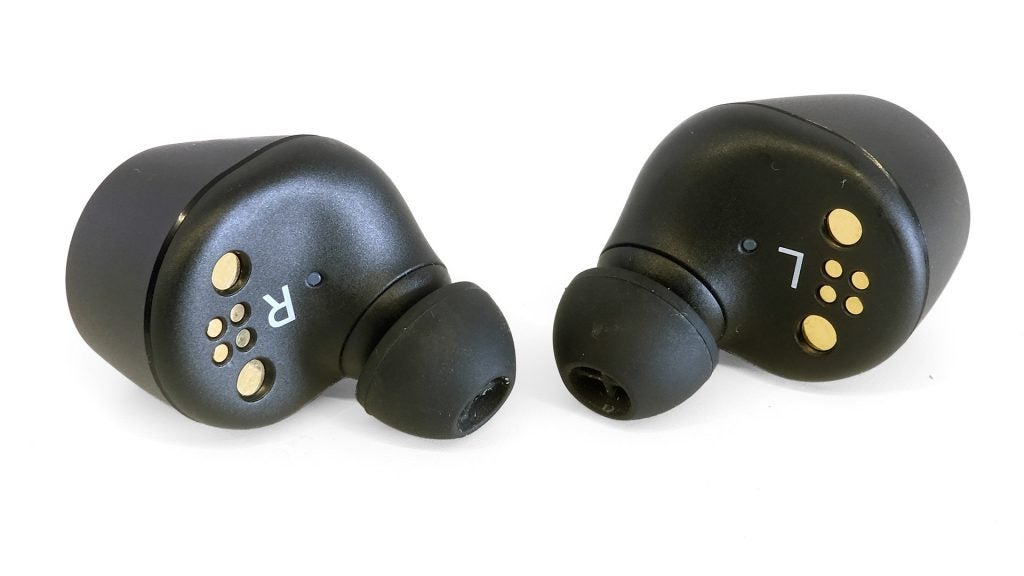 However, what the Sennheiser Momentum True Wireless don’t do is also important to note. These earphones lack active noise cancellation for normal use, instead relying on the silicone tips to block out sound. Active noise-blasting is only used for calls.

Battery life is also just okay, although just as I’ve never been able to get on with smartwatches that last a day, I find all true wireless pairs a bit of a trial to live with. The Sennheiser Momentum True Wireless will see you through four hours of continuous audio playback. They lasted 3hrs 54mins at what I consider normal listening volume. But as they continue to use some power if you whip them out while at the checkout at Tesco, real-world use may seem slightly lesser.

The case will recharge the True Wireless twice, for around 12 hours of use, before requiring the charge cable. A button, and LED indicator, on the rear of the case lets you view the remaining charge. But just like the earpiece controls, you need to learn what the various LED colours mean since there’s just a single dot of light here.

These aren’t the most intuitive of earphones.

Wireless performance is good, with a couple of minor caveats. I heard virtually no general Bluetooth interference, but I found that the security gates at shop entrances (in the UK, at least) would interrupt the signal between the earpieces. You’ll hear a little blip whenever you enter of leave a shop, making your music pause on occasion.

There are times the True Wireless appear to get a little confused, with the secondary earpiece failing to play music until you’ve popped it in and out. Problems seem to stem from the inter-earpiece comms, not the basic Bluetooth, which uses v5.0 of the tech and aptX.

Music also stops automatically when you take one of the earphones out of your ear – and there’s no way to disable this action. I found this rather annoying, since taking an earpiece out to hear a train announcement is still much simpler than trying to turn on the Transparent Hearing feature.

The Sennheiser Momentum True Wireless have 7mm dynamic drivers. Tiny drivers such as this often provide great sound quality, and these are up there with the Sony WF-1000X as one of the best-sounding earphones in this class.

In many ways, the sound is classic in-ear Sennheiser. These earphones are rich and velvety, with boosted low-mids that don’t obscure texture in favour of ear-charming warmth. This isn’t easy to achieve – a sign that these earphones have good drivers and careful tuning.

Bass is a little less enthusiastic than some other Momentum-series earphones, but this results in a more coherent tonal transition between the bass and mids. It makes the Sennheiser Momentum True Wireless sound more high-end than the Momentum Free, for example. Sennheiser clearly doesn’t want anyone to be argue that it has compromised sound quality in favour of tech. 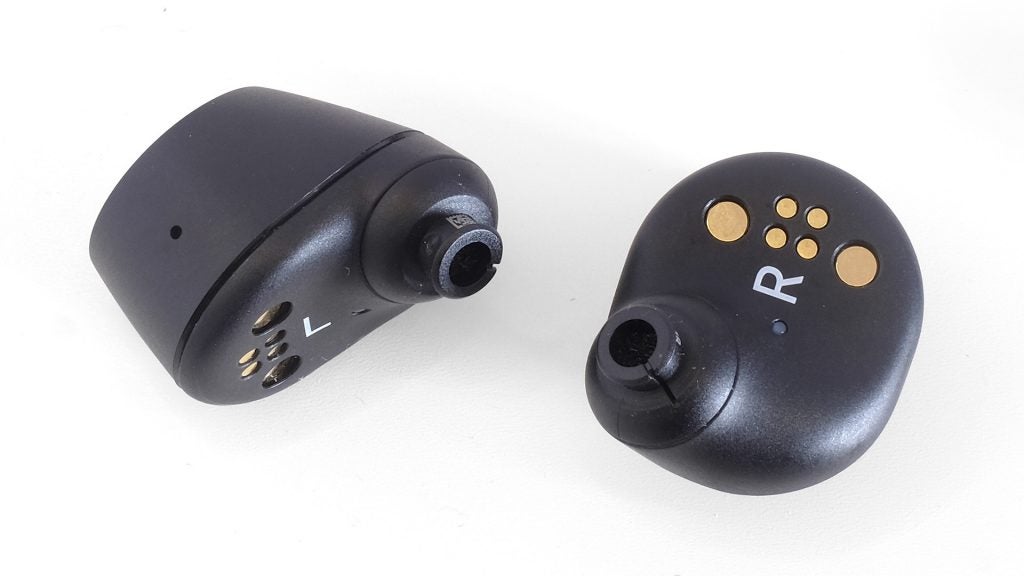 The True Wireless aren’t ultra-balanced, studio-style earphones. They’re out to offer enjoyment, not spare and revealing sound. However, where lower-end crowd-pleaser headphones are the equivalent of deep-fried food, this is more like that of a fancy restaurant that is a fan of sautéing everything in butter.

The Sennheiser Momentum True Wireless also have true higher-end performance in some areas. Spatial imaging is excellent, and the weightier lower frequencies don’t appear bloated. Just like the Sennheiser CX 5.00i and Momentum in-ear, the sound is involving.

Treble is smooth and relaxed. You won’t hear the real bite of a bright earphone, which offers a more active promotion of fine detail in music. However, the Sennheiser Momentum True Wireless don’t seem excessively soft. Higher-end detail doesn’t leap out, but it’s there.

You could comfortably listen to the Sennheiser Momentum True Wireless for well beyond their four-hour battery life without fatigue. Aggression is the one thing these earphones’ laid-back sound can struggle with. 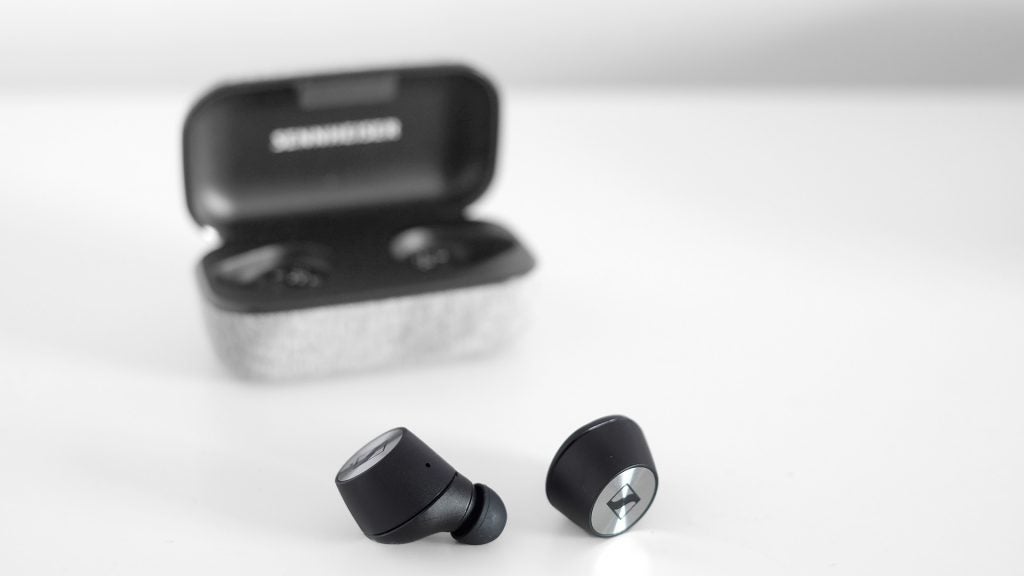 You should buy them if…

They sound better than most earbuds in this class, though subsequent efforts have bested them, including Sennheisers own TW2 wireless earbuds.

They Momentums are still available at online retailers (March 2021) for around £150.

You shouldn’t buy them if…

The Sennheiser Momentum True Wireless aren’t first-gen true wireless earphones, even if they’re Sennheiser’s first.  their Bluetooth is generally good, and they offer some useful extra features such as ambient sound monitoring.

And while their approach to controls keeps the design slick and simple, you need the manual to work out how to use them. Earphones shouldn’t need a manual. 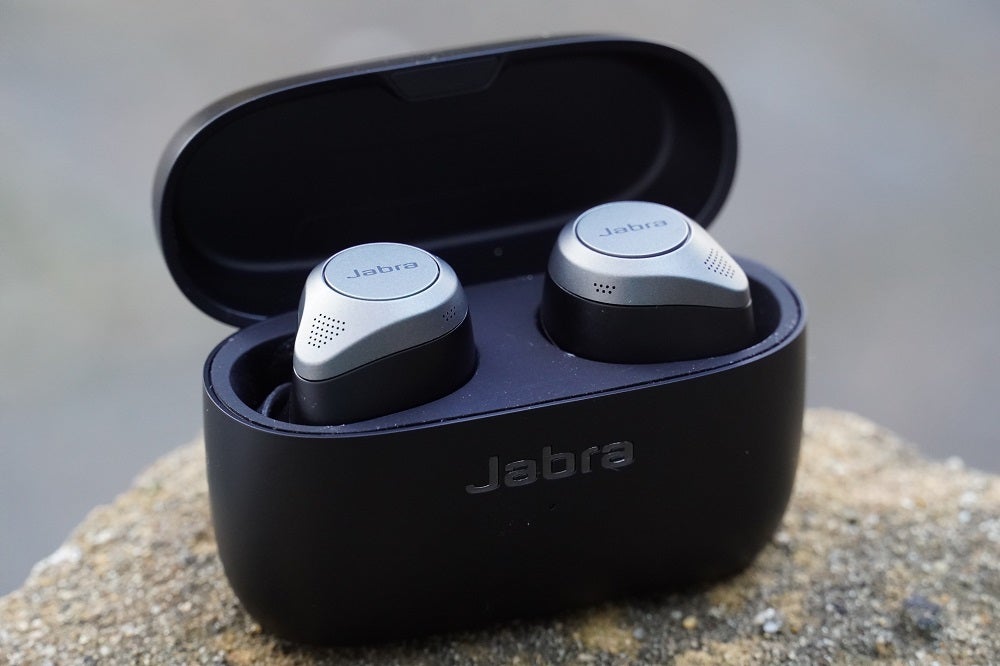 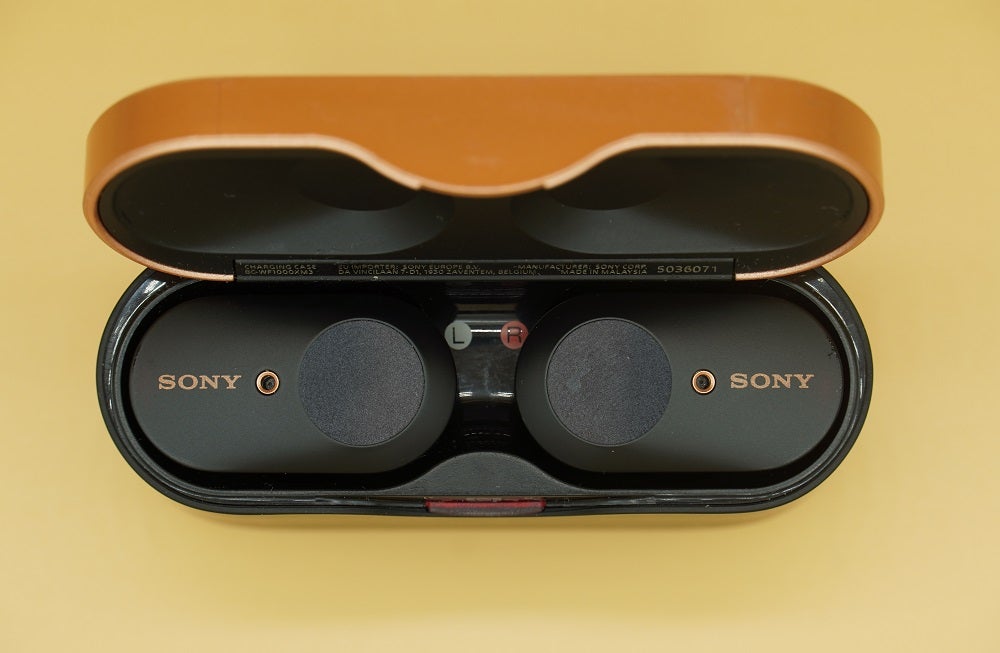 Bluetooth – named after 10th-century Danish king Harald Bluetooth who united Denmark’s tribes into a single kingdom – is a method of wireless transmission that allows for the exchange of data between devices over short distances.