What are the Sennheiser Momentum In-Ear Wireless?

The Sennheiser Momentum In-Ear Wireless are Bluetooth earphones. However, they’re nothing like the Apple AirPods, aside from being wireless and selling for a similar price, since they sport a neckband rather than standalone earpieces.

They’re not ideal for use while running, though: the band is a bit too heavy for comfort. And, as with other Sennheiser Momentum headphones, the cost of wireless is steep: up to £100, depending on how hard you shop. 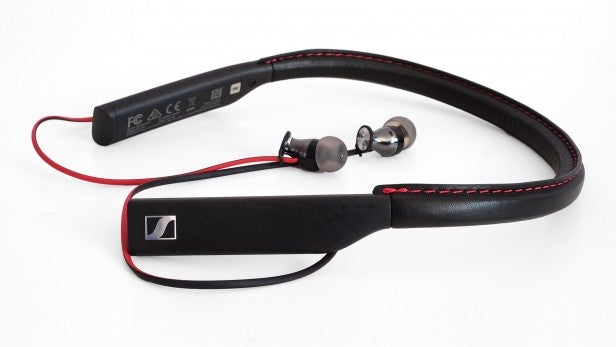 The Momentum are Sennheiser’s series of ‘luxury’ style headphones for folk with a ‘normal’ budget, not those with the money to spend on a pair of £1000 Sennheiser HD 800. This luxury edge in the Momentum In-Ear Wireless can be seen in the real leather used on the neckband.

I’ve worn plenty of £500-odd headphones that use synthetic leather, but the Sennheiser Momentum In-Ear Wireless use sheepskin nappa leather, which also makes an appearance in the Momentum 2.0; it’s a signature move. And while these £170 earphones aren’t inordinately expensive in this class, the use of real leather does go some way to explain the substantial price. 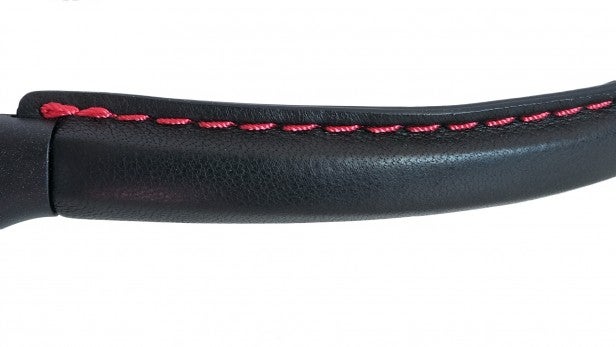 The earpieces themselves are similar to those of the wired Momentum in-ear, with a slightly odd disc at the rear of each, through which the cable loops. They’re a little like cartoon bombs, if you squint.

I’ve never been a huge fan of neckband headphones with built-up bands such as this, and this neckband in particular is one of the chunkiest I’ve tried. The cables that join the earpieces to the band also look a little silly, curling out conspicuously and drawing further attention with their two-tone black/red design.

Issues with the looks did fade on using the Momentum In-Ear Wireless, however – only to be replaced with disappointment on learning how they behave during a run. 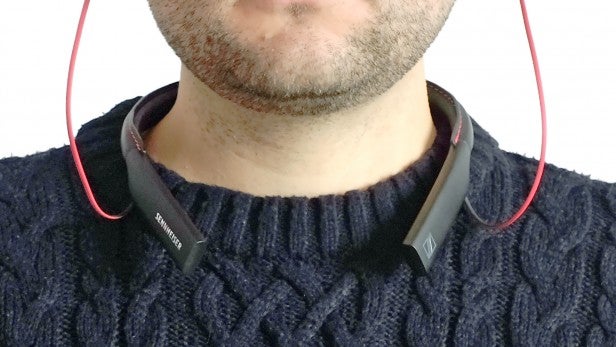 Using them on the treadmill at the gym, the relatively high – and seemingly unbalanced – weight of the band caused them to bump around and rotate off my neck. During a pretty short 10-minute run I had to push them back into place a handful of times.

This is a shame when you consider that this type of earphone is often considered a gym/runner’s choice. I’d much rather use the Skullcandy Method Wireless during a run, despite the Sennheiser set sounding a lot better.

There’s plenty of tech packed in, however. There’s NFC for quick pairing with a phone, and aptX support for higher-quality Bluetooth streams. The battery lasts 10 hours, which is just over the average for a neckband set of headphones such as this. 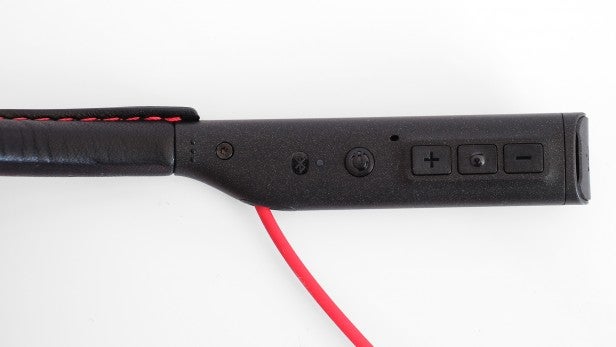 One benefit of the large band is that the Sennheiser Momentum In-Ear Wireless can fit in their controls easily. The inside of the left part features the standard three-button layout of a phone remote, letting you play/pause, change volume and switch tracks without anything more complicated than a double-tap.

These buttons are easy to use blind, and are well positioned, ending up down by your collarbone when worn. The end of this side of the neckband pulls off to reveal the micro-USB charge socket.

Looking closer, this part isn’t rubber-sealed, it’s just a plastic bung. I didn’t require anymore convincing that the Sennheiser Momentum In-Ear Wireless don’t appear to be made for sport, but a look at the user manual confirms it. “Keep all liquids away from this product” it reads, letting you know these earphones aren’t at all water resistant. 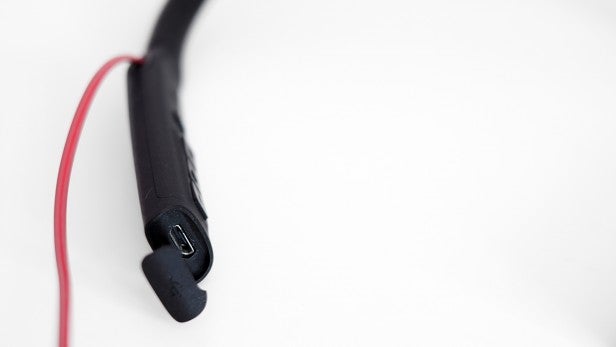 The leather of the neckband will also likely absorb funky odours, and is liable to become a little grotty unless regularly wiped down after use.

The earphones are supplied with a nice, semi-hard carry case, though. The Sennheiser Momentum In-Ear Wireless also come with four pairs of rubber tips to ensure a good fit. 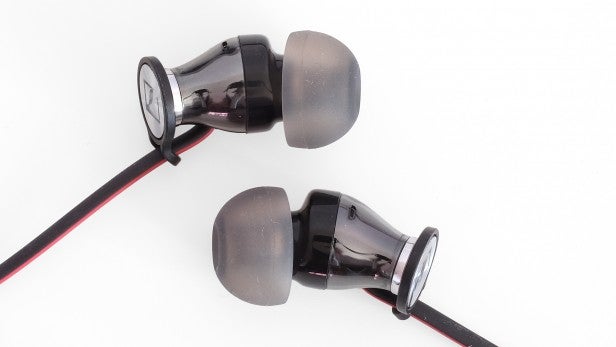 The Sennheiser Momentum In-Ear Wireless sound very similar to the wired version, which is no surprise. This is Sennheiser’s take on the sort of sound people tend to want from portable street headphones without trading away all of Sennheiser’s hi-fi cred.

These earphones sound rich and wide, more expansive than most in this class. Like other Momentum headphones, the Sennheiser Momentum In-Ear Wireless also have a fun low bass, but without the kind of universal bass emphasis that clogs up the sound significantly. 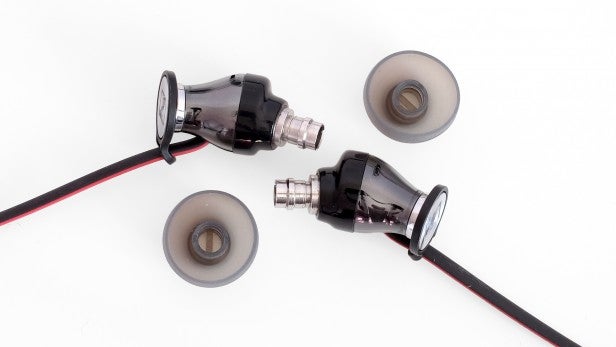 Treble is clean, and able to convincingly render searing “I’ve just been dumped” raw vocal lines without getting remotely close to taking your ear off in the bargain. The Sennheiser Momentum In-Ear Wireless are engaging and enjoyable. Most people will like them.

These earphones don’t have the mid-range tone of real high-end earphones, though. During testing I’ve been digging out a few old favourite earphones including the Sennheiser IE8i and Shure SE420. These pairs have much greater mid-range fidelity. While the Sennheiser Momentum In-Ear Wireless don’t have a vacant mid-range, much of its detail comes from slightly higher up the frequency spectrum.

Male vocals, in particular, find some of their texture represented by higher frequencies than is ideal, making reproduction that bit less realistic. Among their wireless peers, though, there’s very little to complain about here sound-wise. 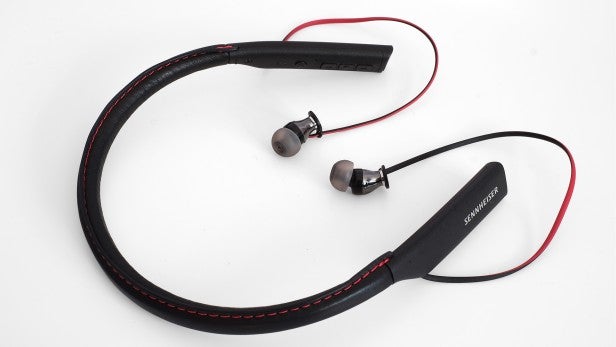 Should I buy the Sennheiser Momentum In-Ear Wireless?

There’s a crucial split to the Sennheiser Momentum In-Ear Wireless’ potential audience, and one half should feel fine in disregarding the slightly tepid review score.

If you don’t plan to use these headphones while working out, they’re solid. As with many premium earphones, wireless functionality comes at a pretty high price, but they work well and sound good.

However, they’re a poor option for sport and exercise use since the relatively heavy and unstabilised neckband begins to move as soon as you do. Also, frankly, they look a little silly, as a result of the attention-grabbing cables.

Solid Bluetooth earphones for casual use, but the design needs refining.