Headphones don’t come much more feature-packed than the Sennheiser MM 550 Travel, a set virtually identical to the PXC 360 BT. They offer active noise cancellation and Bluetooth wireless streaming, as well as an SRS “3D” sound mode. However, none of these features come cheap and at £299 these headphones are more expensive than the Bose QuietComfort 15 and the Beats by Dr. Dre Noise-cancelling HD. Both are some of the most famously expensive sets on the market.

That £300 bank balance dent doesn’t get you amazing style, but, aesthetics aside, build is excellent. The Sennheiser MM 550 headphones surround your ears with leather effect earpads that are among the softest we’ve tested. They exert enough pressure on your head to keep them in place while walking or running, but the grip is light enough for long listening sessions in comfort. 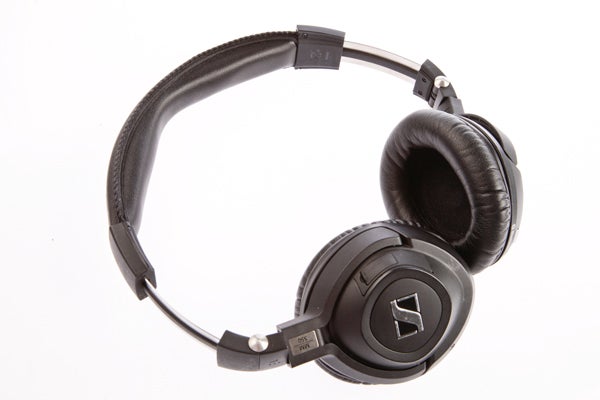 To keep weight down, most of the headphone structure is plastic. A 1mm thick band of metal runs through the headband to give the right blend of flexibility and strength, but the rest is good old plastic or leather-effect padding.

Style-wise, they fall in the non-specific no-man’s land between the youthful Beats and the positively middle-aged Bose models. They’re mercifully a smaller than the previous-gen PXC 450 model, but are not beautiful. The right cup in particular is laden with buttons and controls, giving the impression that the Sennheiser MM 550 might be the ultimate geek headphone. 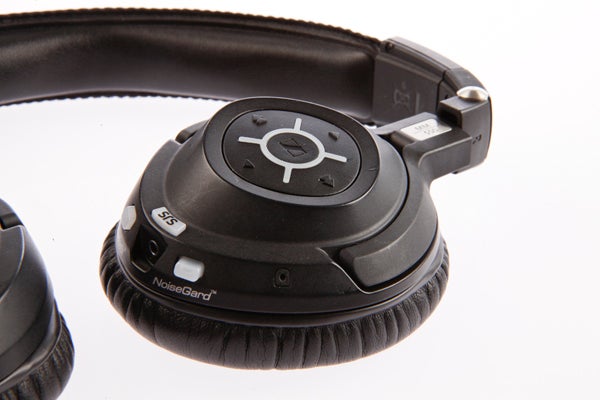 In their defence, they can do an awful lot. A neat proprietary battery plugs into the left ear cup, which powers both the Bluetooth function and the NoiseGard active noise cancellation. They also let you take calls with a mobile phone, and control music playback and volume without a separate remote unit. Clever, huh?

It does all this using the control panel sitting on the outer part of the right ear cup. This holds five plastic buttons, performing music and call-related functions wirelessly over Bluetooth. The call microphone is built into headphones too, further upping its feature set well beyond most noise cancelling headphones. 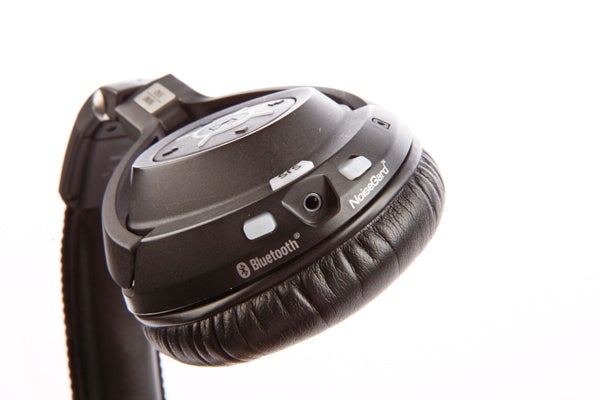 If the battery runs out, you’re not entirely stuffed, though. You can plug-in a 2.5mm to 3.5mm cable to use them as simple “dumb” headphones – although the headphone cable doesn’t feature a handsfree kit.

All this functionality has a cost other than having to remember to charge the battery. The Sennheiser MM 550 is one of the few pairs of headphones to have a learning curve. A lengthy press on the central button on the cup turns the Bluetooth on, but you have to sync-up a phone or Bluetooth-enabled media player before the two will play together. Enabling other features isn’t quite as simple as a flick of a switch, either. Each key function has its own button on the button of the right ear cup, but pressing for the wrong length of time may have an unwanted effect – turning-on TalkThrough instead of NoiseGard active noise cancellation for example. 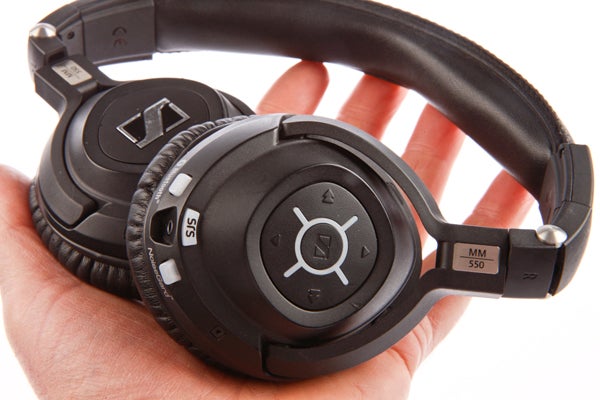 NoiseGard uses the microphones on the headset to monitor ambient noise and wipe it out by passing an inverse wave through the speaker. The peaks and troughs of the original wave and its inverse meet and, hey presto, the noise disappears.

TalkThrough uses the external microphones to let you hear what’s going on more clearly – the opposite of noise cancellation. The microphones are too sensitive to make the output sound natural, boosting quiet sound out of normal proportion, but it does work.

NoiseGard works reasonably well too, removing low-end hums produced by engines and air conditioning units effectively. It’s significantly less powerful than the cancellation of the Bose Quietcomfort QC15, however, and is also noisier. NoiseGard produces a very minor low-mid fuzzy drone. It’s not distracting during listening, but if superior noise cancellation is your top priority, these aren’t class-leading.

Along with the headphones and 2.5mm-to-3.5mm cable, the Sennheiser MM 550 Travel come with a soft case, a power plug with adapters for US, EU, UK and AU, plus an airplane converter and 6.3mm converter.

Typical of their “do everything approach”, the Sennheiser MM 550 will play music whether the NoiseGard cancellation is on or off. The sound changes significant between these two modes, though.

With noise cancellation disabled, these headphones sound great. There’s an emphasis on detail that affords them a relatively delicate signature. Bass is well-formed and deep, but it takes a back seat to the upper frequencies. Consequently, there are not masses of slam or attack on offer, but the MM 550 are clearly more “Hi-Fi” than the Bose QuietComfort 15. 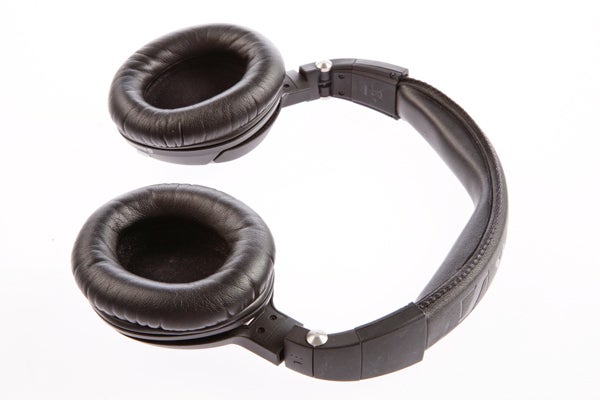 They do not supply a great deal of mid-range warmth, however, which can lead to some music sounding a little thin. Regina Spektor’s already fragile-sounding voice sounds like it might shatter following a strong gush of wind, for example.

Minor audio problems become far more significant once you turn NoiseGard on. What warmth there is gets sucked-out, leaving the mid-range harsh and jaggedy. Given material prone to harshness, the MM 550 become quite an uncomfortable listen. This is not what we expect from headphones costing more than £300.

The SRS mode doesn’t help either. SRS stands for sound retrieval system, and is designed to produce a 3D-like sonic effect with just two speakers. Although somewhat effective in making instruments and voices sound further away from your ear, giving an impression of greater headspace, it also makes music sound slightly compressed. Music largely sounds better without it. 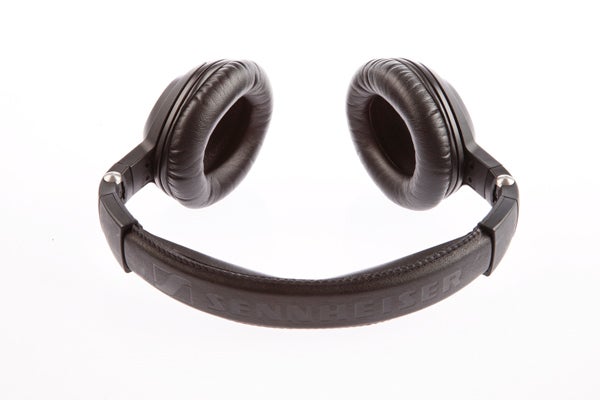 Turning SRS on also introduces some high-frequency noise to the output, which is the last thing these headphones need when the noise cancellation is somewhat noisy.

What the Sennheiser MM 550 get right on the audio front is the use of apt-X. This is an audio codec used to transmit sound over Bluetooth, and it offers better quality than the standard SBC codec. For the two-channel audio here, apt-X transmits at 384kbps – not lossless but not bad either.

With both NoiseGard and Bluetooth enabled, the internal removable battery will last for around eight hours – or around 10 without NoiseGard. The convenience of not needing wires is paid for with having to charge the battery and deal with the idiosyncrasies of Bluetooth. 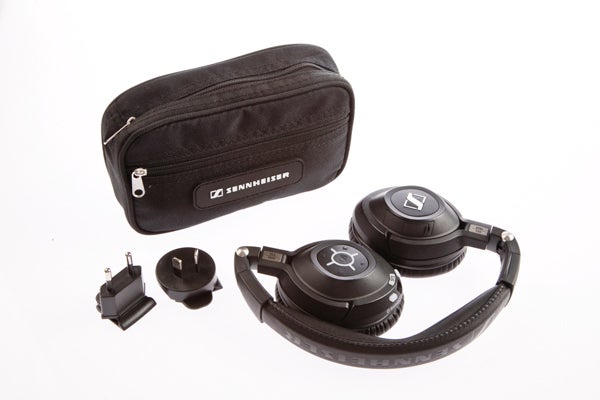 While you might be able to square away these practical issues, the price is much harder to forget. The Bose QuietComfort 15’s £230 price is hard enough to swallow, but when the Sennheisers cost £100 more and yet offer inferior noise cancellation and sound that – while better in many respects – is less pleasant when key functions are enabled, performance simply doesn’t justify the outlay.

If noise cancellation is your top priority, the Bose QC3 and QuietComfort 15 cut out more noise. If you want Bluetooth, Sennheiser’s cheaper PX 210 BT and PX 360 BT are better value. And if sound’s your top concern, you’re best off forgetting about extraneous features like Bluetooth and noise cancellation altogether and looking at standard closed-back headphones.

The Sennheiser MM 550 pack in plenty of features – Bluetooth, noise cancelling handsfree calls and wireless music playback controls – but you certainly pay for them. At this price we also expect near-flawless sound to match, but we don’t get it. Without noise cancellation engaged they’re insightful, if lacking in impact, but NoiseGard introduces mid-range harshness that has no place at this level.