In-ear headphones can come in all sorts of shapes and sizes but the basic technology behind them can be broken down into two groups; those that use moving-coil (dynamic) drivers and those that use balanced armatures. Now, I won’t go into the intricacies of what the differences between the two types are, for that you can pop along to wikipedia, which has a good explanation.


In summary, though, balanced armature drivers are easy to make small without losing accuracy/quality but they naturally have a narrower frequency response and require a better seal to deliver their full potential. This is why the best headphones use dual and triple driver configurations and also why these often have to be inserted unnervingly far into the ear-canal to get the best from them.


Dynamic drivers, on the other hand, can cope much better with the full frequency range and require less of a seal to get the best from them but they’re also inherently larger. There are also tonal differences but I’ll come to those later. For now, let’s get to the guts of this review.


The Sennheiser IE8 earphones, then, use a single moving-coil driver in each earpiece. Sennheiser claims this one driver is enough to compete with the best dual and triple balanced armature driver headphones made by the likes of Ultimate Ears and Shure. Considering both the Shure SE530s (E500 as was) and Ultimate Ears triple.fi 10 Pros cost only marginally more but have proved themselves to be truly outstanding earphones, the IE8s certainly have a lot to live up to. 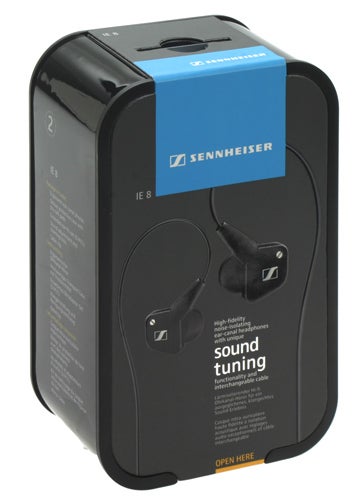 Upon arrival the IE8s make a good impression with a rather stylish case opening to reveal the earphones all neatly laid out along with plenty of accessories. Unfortunately, it quickly becomes apparent the packaging and accessories resemble a case of style over substance. 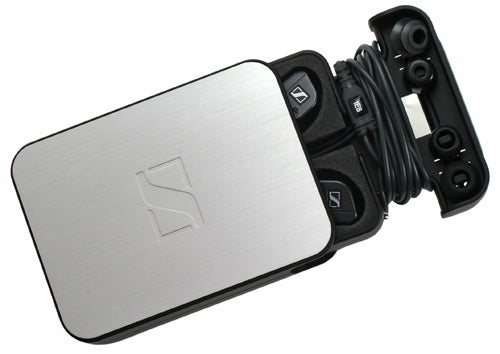 The carry case is a peculiar two piece affair with a slide out insert that the earphones wrap around and an outer protective sleeve. Now, it isn’t inherently difficult to nestle the drivers in their foam homes and wrap the excess cable but it is most definitely pointless, as are the holders for spare tips. This is supposed to be the place you store your earphones for use everyday, so why on earth would you constantly want four spare tips with you?


Then there’s the fact the case leaves no room to store miscellaneous accessories like an airline adapter or 3.5mm to 6mm jack adapter (not that you get any of these in the box). As I’ve said before, a simple zip up case with an internal pocket for whatever accessories ”you” want is all that’s needed.

One positive aspect of the case is a ‘dry-salt’ pad that sits in a removable cage nestled in the foam surround. This absorbs any excess moisture that may have collected on you headphones making them more hygienic and reducing the risk of moisture damage. If you’re a regular gym goer, this should be a real boon. That said, I’ve never had any problems with any other headphones that don’t have this feature. 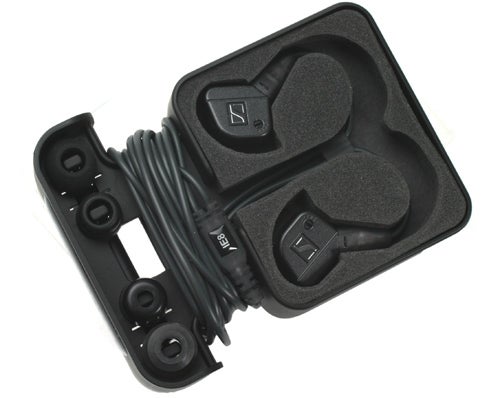 You get four different types of tip including traditional single and double flanged silicone ones and a familiar looking smooth coated foam type. However, there’s another one that looks frankly scary. It’s a variation on the double flanged silicone type but with firmer more pointed flanges. Unfortunately, none of the tips quite seemed to give a truly comfortable fit, at least to my ears. This seemed to be because the end of the driver enclosure is already very wide, leaving little room for the tips to adjust to the fit of your ear.


The best were the foam type that, unlike most normal foam tips, can just be inserted straight into the ear without pre-squashing the foam. They provided a decent level of noise isolation despite sitting quite shallow in the ear and they were also surprisingly comfortable considering their size. That said, they certainly don’t compete in terms of noise isolation with the deeper-insertion tips from the likes of Shure and Westone and these earphones certainly aren’t featherweight. 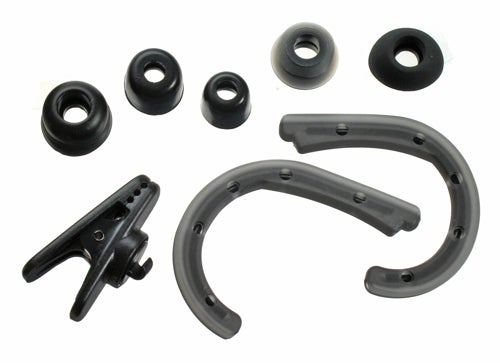 A pair of malleable over ear wire holders are included to keep the IE8s more firmly clasped to your ears. However, we didn’t feel the need to use these as the ‘phones felt perfectly secure without them. Besides which, I found they just ended up snagging on my long luscious locks, which will never do.


One thing we do particularly like about these earphones is the removable cable; a good tug on the connector at the base of each ‘phone brings it away and you can then replace the standard 125cm one. Sennheiser hasn’t gone quite so far as to include any alternative length cables but they are available to buy for a modest cost. 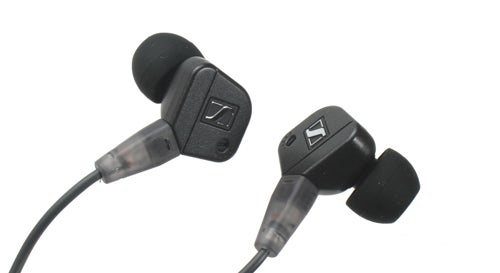 For those of you vaguely familiar with these earphones, you’ll notice there’s one aspect of them I haven’t talked about yet and that’s that they’re adjustable. In a similar vein to the Sleek Audio SA6s, you can control the tone of the earphones to suit your own tastes. However, instead of replaceable treble tips and bass ports, Sennheiser has gone for a simpler option of a tiny dial on the side of each driver. Using a small screwdriver, or the included tool, you can turn the bass response from flat to, well, pounding! 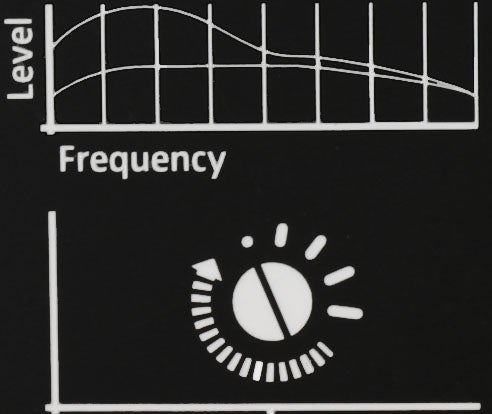 Now when we first heard these earphones we had a bit of a play with this dial and generally had a good listen and came away fairly unimpressed. The bass even at it’s lowest level was flappy and overpowering and seemed to come at the expense of top end clarity, while turning the dial up just extended this to near comic effect. A contender to the Shure SE530’s crown, these certainly didn’t seem to be.

However, after 20 hours, or so listening, the IE8s had settled down (loud speakers and other audio devices often need to burn/break-in before they sound their best) to a point where the bass was still huge and powerful but much tighter and responsive. Listening back to back with a variety of alternative earphones and the difference in bass level is still very pronounced but in isolation the IE8s sound perfectly natural. 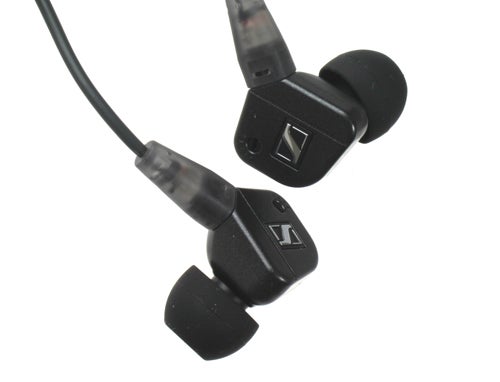 That said, there’s definitely a secret to getting the best out of them – they need to be cranked up reasonably loud to enable the clarity at the top end to break free of that colossal bass. In this respect they are almost the direct opposite to the Shure SE530s, which have all the clarity in the world even at very low volumes but need to be cranked up to get a decent bass kick out of them.


However, loud you drive these, though, there’s no denying they lack that last bit of top end sparkle that the various multi-driver headphones we’ve mentioned have. In some respects this isn’t a bad thing as I actually find my very sensitive ears can get tired of the Shure SE530’s trebly sound (I was astonished to learn that Riyad and Hugo listen to their SE530s and SE420s at well over half volume on their iPhones whereas I can’t tolerate higher than a quarter with my SE530s) whereas I can listen to these Sennheisers all day and not feel a thing. 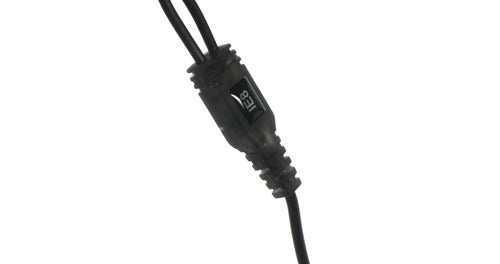 Another aspect of the Sennheiser’s unique timbre is they sound more like over-ear headphones than most in-ear types. Couple this with the single coil-driver’s seemingly endless frequency response and you have a sound that makes you feel more like you’re actually in the room with the musicians than any other earphone I’ve used before. Not that you hear more detail – you certainly don’t – but you get more of a sense of distance and placement from the music and the bass goes some way to emulating the feeling that you get at concerts where the bass travels not through your ears but up through your body, and that’s something that I’ve simply not experienced with other in-ear headphones.


In essence, then, these have to be one of the most enjoyable everyday headphones I’ve used for casual listening and most fans of rock and pop music will lap them up. However, if you’re more into your jazz, acoustic, and classical music and want to here every nuance then you’re still better off with our long-time earphone of choice, the Shure SE530s.


Sennheiser has taken a slightly different approach to creating its high-end in-ear earphones, the IE8s, and has come up with something that sounds quite astonishing. Their huge bass response will certainly please rock and pop music fans and even those that prefer the finer things in life will find these represent a good listen. However a few issues with the package as a whole make it hard to recommend these outright.