The Sennheiser IE 300 are stripped-back earphones with zero superfluous tech but excellent sound. They're tuned for impact and detail, however – something to consider for those who want a flat frequency response.

The Sennheiser IE 300 are the kind of earphones that the big names don’t make often anymore. They’re a simple, wired set whose focus is entirely on sound quality.

There’s no wireless or active noise cancellation. There’s no microphone to let you take calls or talk to Siri.

All weight of judgement falls on the Sennheiser IE 300’s sound. These earphones are quite exceptional in several ways, producing detail in excess of some expensive multi-driver earphones while using a single dynamic driver.

However, the Sennheiser IE 300 aren’t the ultra-faithful, neutral-sounding earphones some may be after. The’re tuned for energy, and to show off the treble response of the driver. A little too much of the sound’s texture comes from the higher frequencies. The sound field isn’t as three-dimensional as it could be.

But the £260 Sennheiser IE 300 will make your music sound more vital than it does through just about any pair of true wireless earphones.

The Sennheiser IE 300 are the kind of earphones I used to review all the time at Trusted Reviews, years ago: sets for people a bit obsessed with audio quality. Spending a stack of money on headphones and earphones has been normalised, but earphones such as these seem more niche than ever.

They comprise earpieces and a cable that plugs into your phone – that’s it (and some tips). And there’s a good chance your phone won’t even have a socket for them these days. The Sennheiser IE 300 don’t have a remote, a mic, nor any form of wireless. 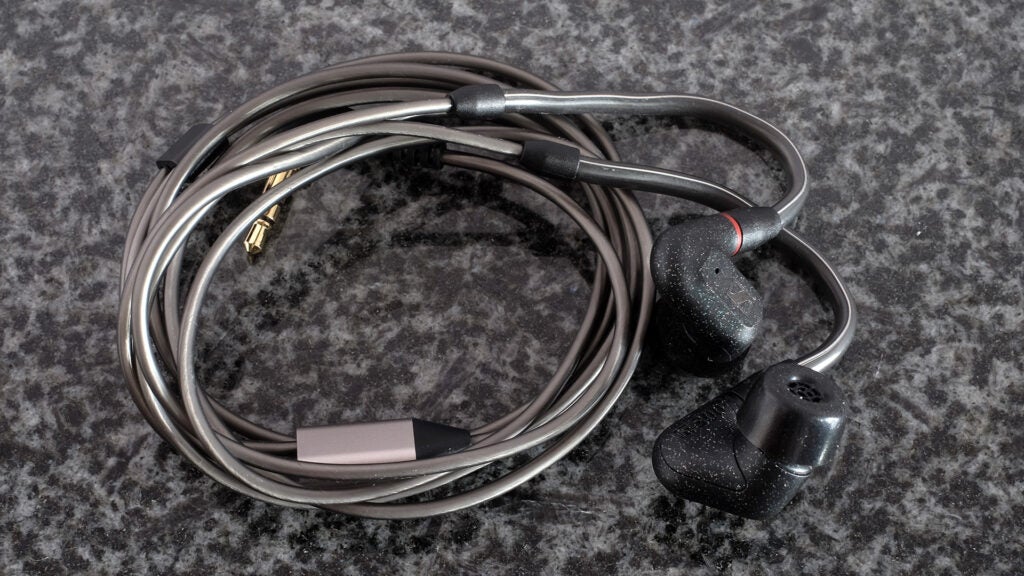 Tech this simple means the Sennheiser IE 300 can’t be pushed into obsolescence because their software or companion app is no longer updated. And they come with a removable cable, since the wire is almost always the first thing to go wrong with earphones.

The Sennheiser IE 300 use a MMCX connector, not a fully proprietary one, but there’s a stabilising lip of plastic by the join so you’ll probably need a cable designed for this pair. A removable cable also opens up the possibility of future wireless use. You can already buy Bluetooth MMCX adapter cables for other pairs. 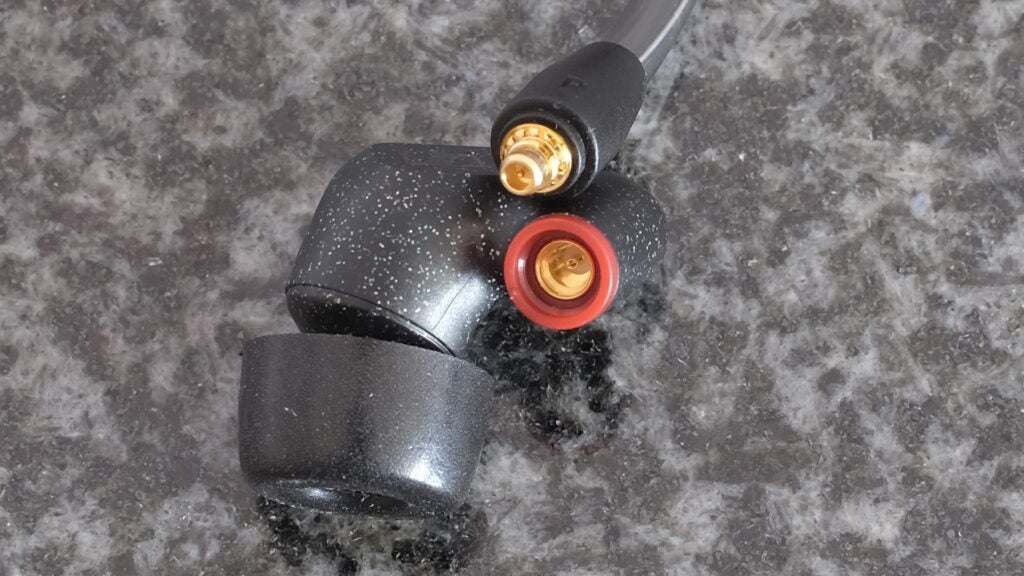 These earphones use a form-retaining hook that runs over your ears, avoiding snags pulling the earpieces out. You get silicone and foam tips in the box, and I recommend opting for the foam ones if you have any trouble with the fit.

For the first week or so I used the silicone tips, and was never quite sure if the seal was quite right. No such problem with the foam tips.

The ear hooks may give the Sennheiser IE 300 a sporty look, but these earphones come with no claims of water-resistance. Instead, this is a design borrowed from professional IEMs, the earphones a lot of musicians use to hear what they’re playing on stage. 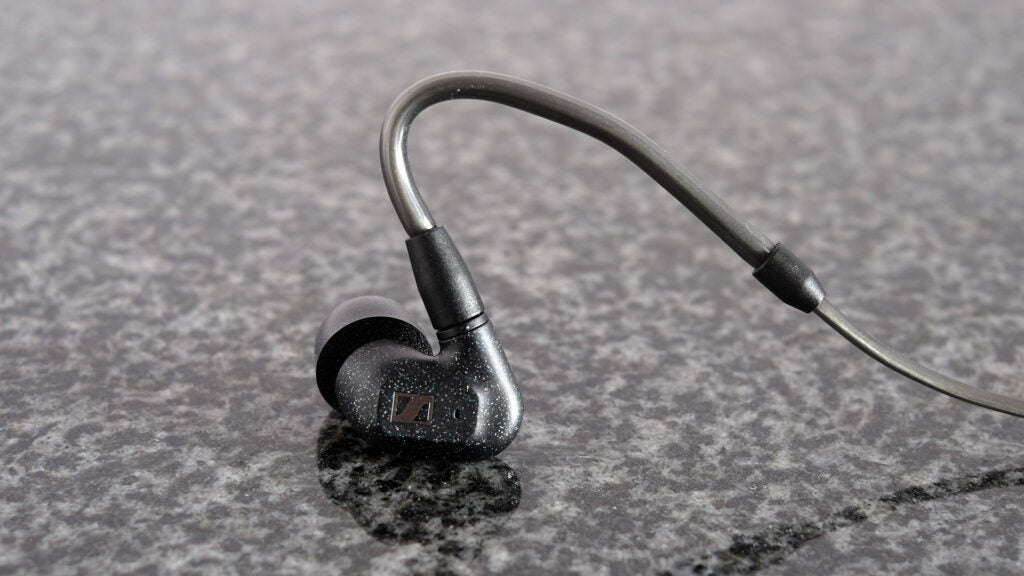 And typical of a high-end earphone, the earpieces are plastic. It’s plastic inlaid with sparkly bits – but the average AirPod wearer would probably guess you’re wearing a set from years ago.

Sennheiser IE 300 sound quality – Out for your attention

The Sennheiser IE 300 are business as usual for Sennheiser, in at least one sense. Back when companies such as Shure drew in audio nerds with earphones of an ever-increasing number of drivers, Sennheiser used one. And rather than employing balanced armature drivers, Sennheiser always uses dynamic drivers.

Sennheiser’s faith in the dynamic driver is unshakeable. The IE300 use a single 7mm unit.

The company has already proved you don’t need to use multiple drivers in earphones, or planar magnetic/electrostatic ones in headphones, to create low-distortion sound. And that continues with the Sennheiser IE 300. 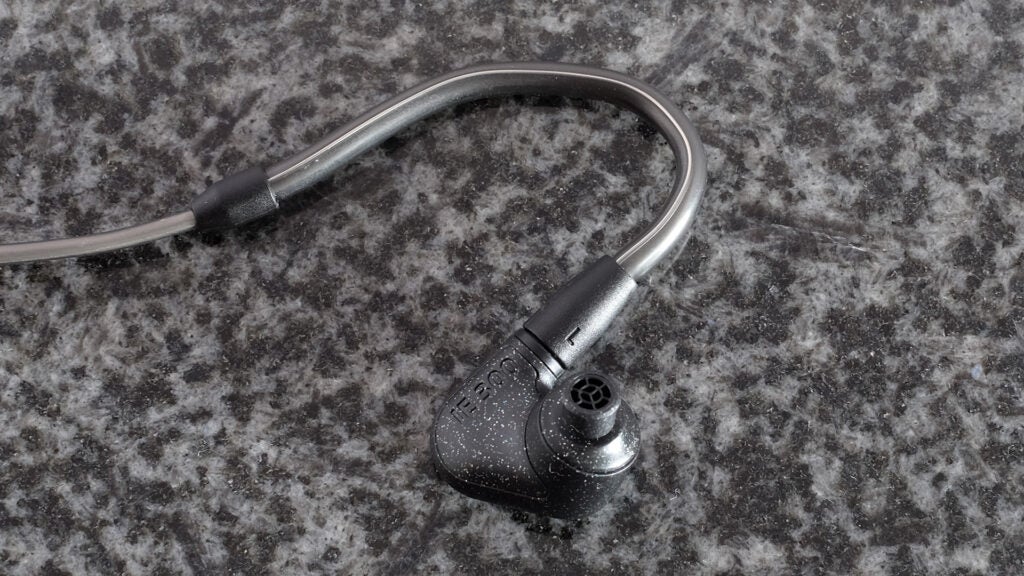 These earphones have truly unusual levels of treble detail considering they don’t come across particularly bright or light-sounding. These higher frequencies are integral to the Sennheiser IE 300’s character, but there’s very little sibilance and no obvious harshness. It’s proof of what a high-quality driver Sennheiser has designed here.

Almost all other pairs I tested the Sennheiser IE 300 against sounded slightly dull in comparison. A certain register here, one that features in the voice of virtually every singer you could feed these earphones, gives the pair an almost guaranteed citric vitality. And because this is quite carefully controlled, rather than aiming for stand-out treble clarity that extends to the further reaches of human hearing, Sennheiser avoids an acidic or outwardly bright character.

The Sennheiser IE 300 also display powerful bass. Sub-bass depth and punch are good, and this low-end is the second source of energy and vitality for your music. 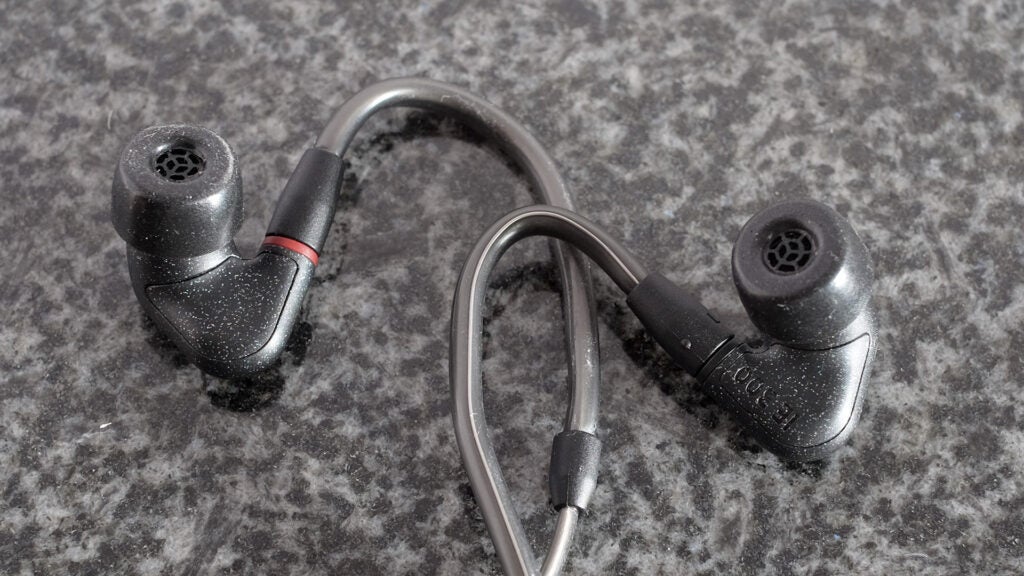 However, that I’m talking about these earphones in such terms reveals that the Sennheiser IE 300 aren’t quite the “flat” or neutral pair many of those still buying high-quality wired headphones will want.

These earphones charm the ear, but their treble and upper-mids hog the limelight; they don’t allow the mids enough room in the rendering of the texture of vocals. The mid detail is there – it isn’t as soft as a pancake as it is in some lower-end earphones. But the choice to emphasise the treble and bass leaves the mids noticeably recessed in comparison to other similarly competent pairs.

It also has an effect on how the Sennheiser IE 300 present music – or the sound field/soundstage, if you want to think of it in a different way.

The boosts to treble and bass are prominent enough to make these regions an almost constant geographic feature in the shape of the sound. And it in effect simplifies the soundstage, making it less complicated and three dimensional than it could otherwise be. By creating two recognisable features in the landscape, you end up mostly noticing those features much of the time. 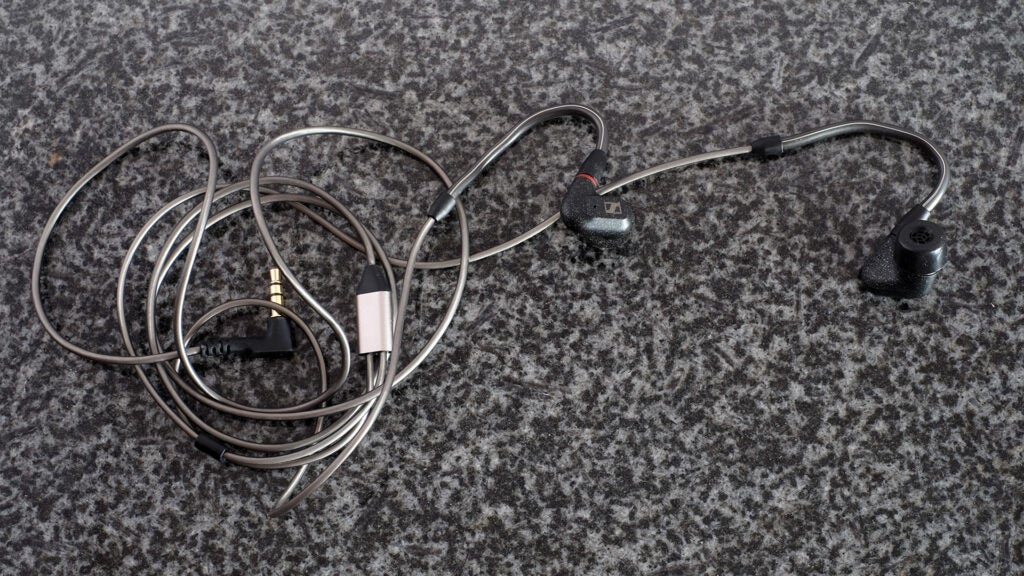 This may sound like I’m calling the Sennheiser IE 300 “one note” simplistic earphones. They aren’t, but I hear more complicated and nuanced imaging from earphones and headphones that are significantly worse in most other respects. These earphones also have a little more mid-bass than I’d usually expect from an “audiophile” pair, which reduces their transparency a bit. 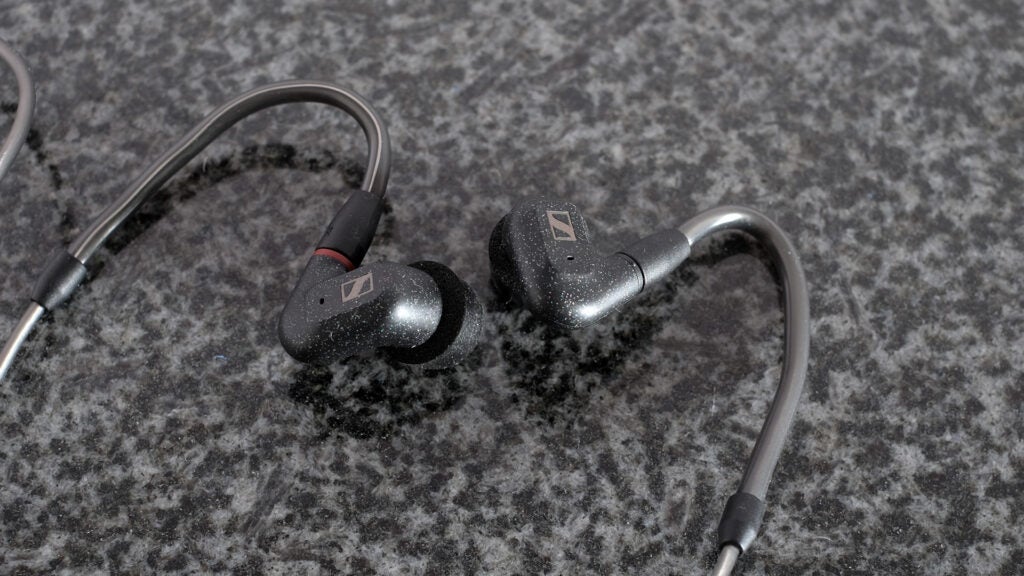 The Sennheiser IE 300 are high-end earphones that lean towards a more consumer-friendly sound, one that trades on impact, fun and energy. It’s no 180-degree turnaround for Sennheiser, however, since the IE 300’s hunt for treble detail reminded me of a little of the Sennheiser HD 800, which I loved back in 2011. However, if you want a neutral and even approach, the Shure Aonic range may suit you better.

You should buy the Sennheiser IE 300 if…

You shouldn’t buy the Sennheiser IE 300 if…