Top-class closed-back headphones, but some of the tuning decisions seem a little odd

What are the Sennheiser HD 820?

The Sennheiser HD 820 are part of one of the most illustrious lines in the entire headphone world. These are top-end Sennheiser cans, outside the limited-run Orpheus series, which at €30,000 or more are the preserve of oligarchs and famous rappers. 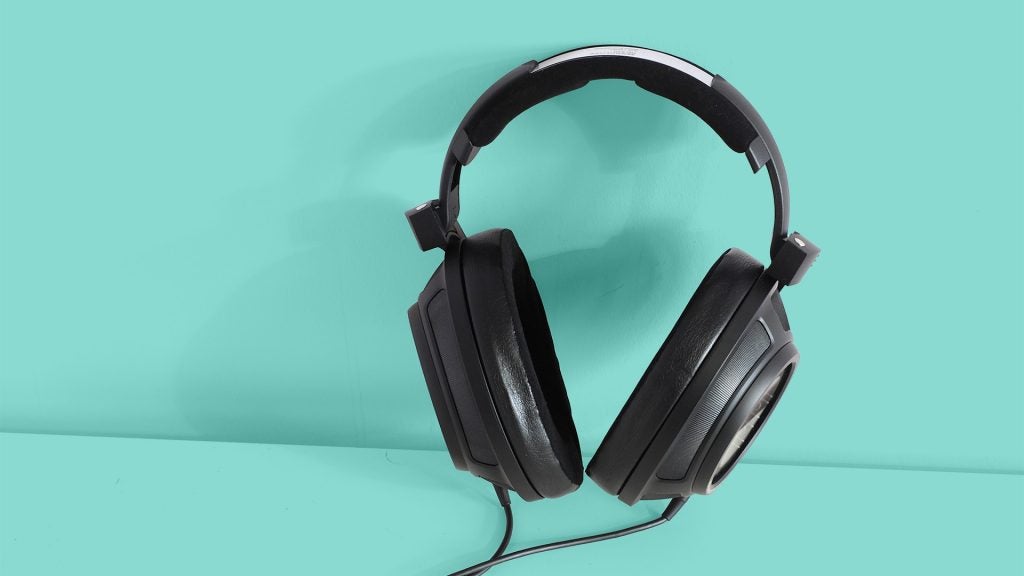 In some ways, the Sennheiser HD 820 are the most practical of all the 8-series pairs. They have a semi-closed design, making them better for noisier homes. And like their open-back Sennheiser HD 800 and HD 800 S siblings, they still offer up one of the largest soundstage of any pairs.

They’re not perfect, though. The HD 800 are just over half the price, don’t sound dramatically lesser, and Sennheiser’s approach to the mid-range here seems a little too informed by its popular Momentum pairs. At £1999 we want true high-end sound, and there is arguably a little too much mainstream flavour on display here.

The Sennheiser HD 820 design is similar to that of the HD 800. They look techie rather than traditional, where quite a lot of high-end pairs introduce wood elements to seem conspicuously high-class.

A few areas have seen changes, though. Fine silver grilles on the back of each cup have been replaced by even tighter-knit black grilles, and while the back of the huge dynamic drivers seem to be exposed, it isn’t. 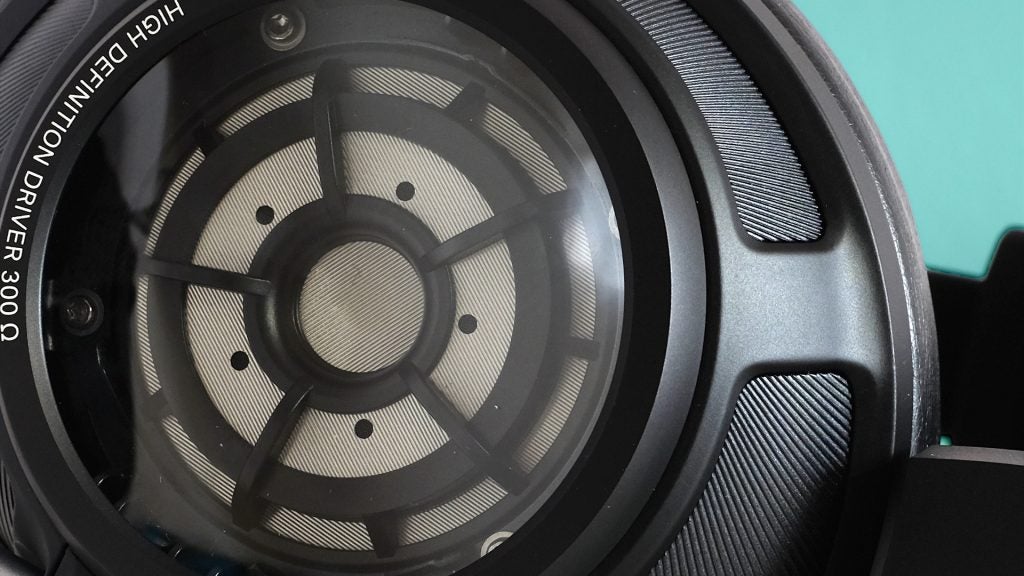 A curved plate of Gorilla Glass sits over it. You can see the (outer) inner workings, but there’s still a physical barrier between the enclosure and the outside world. This may be Sennheiser showing off, but you have to admit it looks pretty neat.

The pads have changed a little too. In place of velour, the Sennheiser HD 820’s pads comprise soft velour in the parts that touch your ears and an outer border of synthetic leather, which is far better at blocking out sound.

Isolation is radically better than that of the Sennheiser HD 800 S’ open design, but it’s only intended to make indoor noises and leakage less of an issue. Both isolation and leakage are poor compared to many closed-back headphones, and the idea of using the Sennheiser HD 820 on a commute is quite ridiculous. 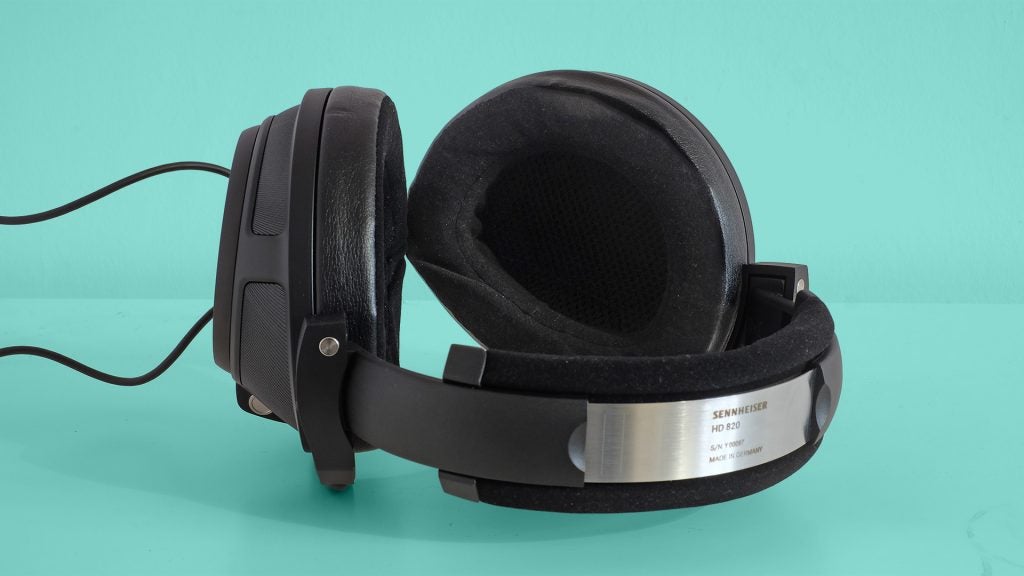 As a closed, or semi-closed, pair of headphones, the Sennheiser HD 820 will heat up your ears slightly more than an open-back alternative. But since I’m reviewing the headphones  in London, during a cold and rainy November, this obviously isn’t an issue.

There’s no involved headband of the type you’d find on the Blue Ella’s here. It’s a single, adjustable band with fairly slender but effective padding. A small part is snipped out of the centre to try to avoid creating a pressure spot right at the top of your head.

The Sennheiser HD 820 distribute their 360g weight (minus cables) pretty well, in part because the large pads have a mid-firm grip on your head and therefore take on a good part of the job of keeping them in place.

These are among the more comfortable ultra-high-end headphones on the market. That they don’t have to deal with quite as large and heavy magnets as a planar set such as the Audeze LCD-4 certainly helps. 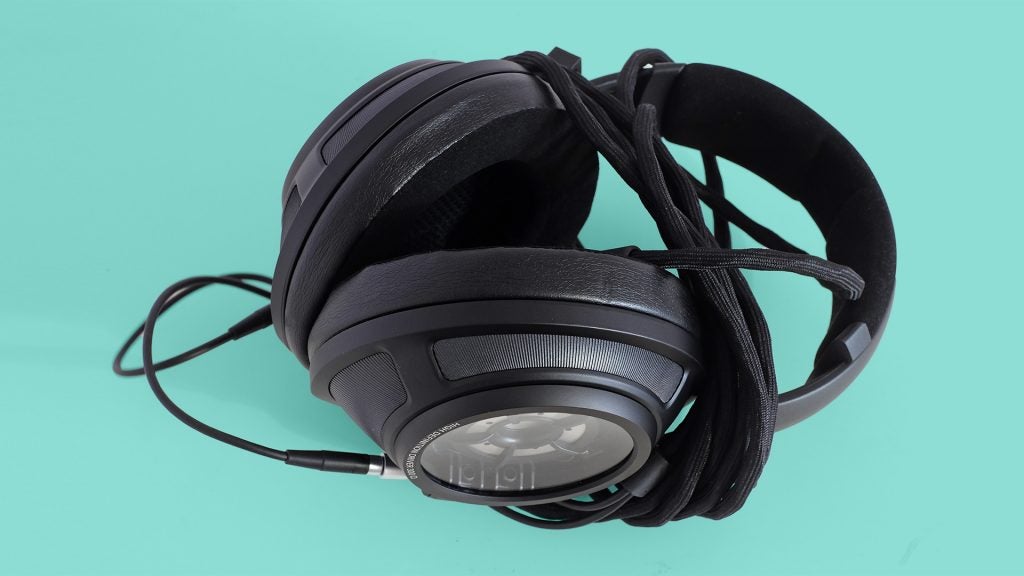 The Sennheiser HD 820’s soundstage is its most impressive characteristic. These are closed, or at least mostly closed headphones, but they manage to recreate most of the ultra-spacious, wide character of the HD 800 and HD 800 S.

They “outdo” almost every open pair in this respect, in part because the now-popular planar magnetic style of driver doesn’t tend to max out on soundstage size and scope. There’s still some closed character to the outer reaches of the sound, with less airiness than the best open models. But this is a closed-style headphone – what do you expect? 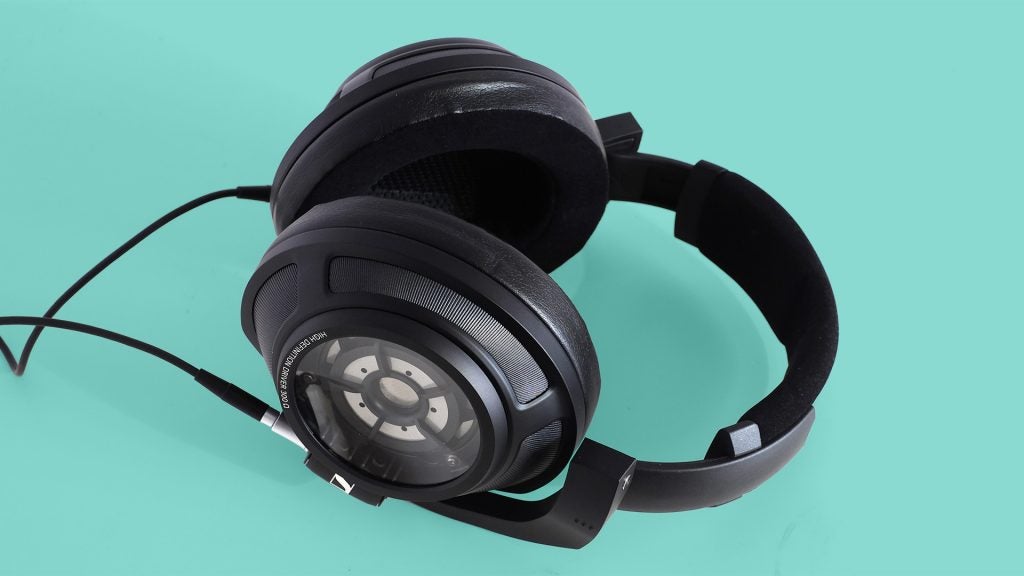 If we consider the HD 820 Sennheiser’s attempt to make a more practical version of the HD 800/HD 800 S, it has to be considered largely a success.

I’m a sucker for headphones with generous soundstages, and find the HD 820 very involving. However, they don’t have everything that made me give the original HD 800 one of only three “10” scores in eight years of reviewing tech at Trusted Reviews.

The HD 800 were unusual, not just for their almost disconcertingly wide soundstage, but they also had intense treble that promoted high-frequency “micro detail”. Try to do this with a bog-standard dynamic driver and you’ll end up with a harsh, brash mess. But Sennheiser’s driver design pulled it off. Granted, some do find the HD 800 fatiguing. 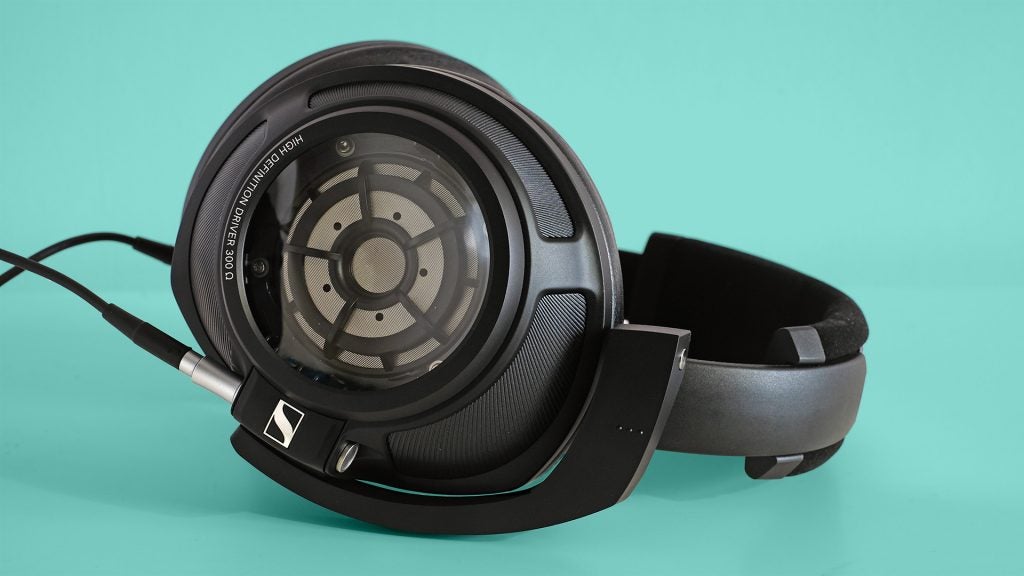 Treble here is more toned down. It’s well resolved, doesn’t seem overly dampened or curtailed, but the tuning is more conservative. You can consider it less aggressive or less ambitious. However, my impression is that it’s an attempt at a more accessible tone. Sennheiser wants buyers to like its headphones, of course – but real accessibility evaporates along with the £1999 price.

Sennheiser has gone further, though. The HD 820 have something I wouldn’t expect of a £2000 headphone: a bump in the mid-bass area.

This skews the delivery of the mids as a whole. Male vocals can often sound as though they sit on a pillowy bed of mid-bass. In a song such as “Room 29′, where Jarvis Cocker’s arrangement-dominating voice reveals mid-range incoherence, the tonal curves leave the vocal sounding too much as if there are separate parts to it. The mid-bass and upper-mids are promoted, with a textural gap between. 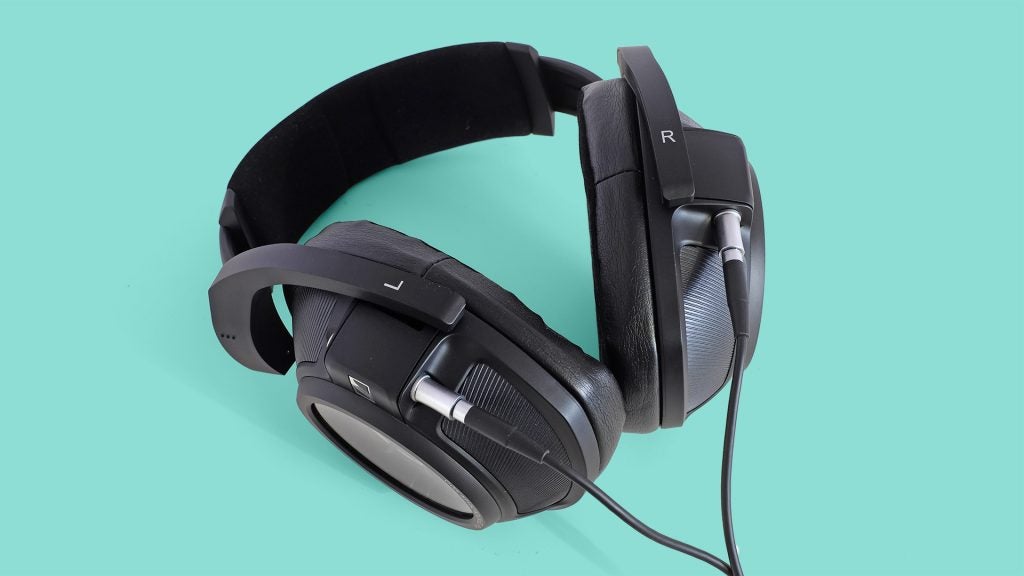 The result sounds rich and luxurious, but is less “true” than that produced by several other lower-end headphones I often use as a reference, including the AKG Q701 and HiFiMAN HE-5. Those pairs offer greater consistency of texture and presence through the whole of the mids, letting baritone and bass hang within the soundstage more realistically.

Whether or not this is a deal-breaker will depend on what you’re after. If you want the ultimate closed listening headphone, the Sennheiser HD 820 probably isn’t the right choice. The HD 800, HD 800 S, or a planar magnetic alternative from Audeze or HiFiMAN would be a better choice.

However, the glossy approach of the HD 820 is still enjoyable. There are no such issues with the frequencies below the mid-bass. The Sennheiser HD 820 have a very deep and confident-sounding bass, with power and the right amount of reserve to sound accurate. This isn’t basshead fodder, but sounds right in an ultra-high-end headphone.

For reference, these headphones were tested with Sennheiser’s own HDV 820 amp, the HiFiMAN EF-5 and a semi-portable Just Audio AH-120 class A amp to get a clearer view of their underlying character. 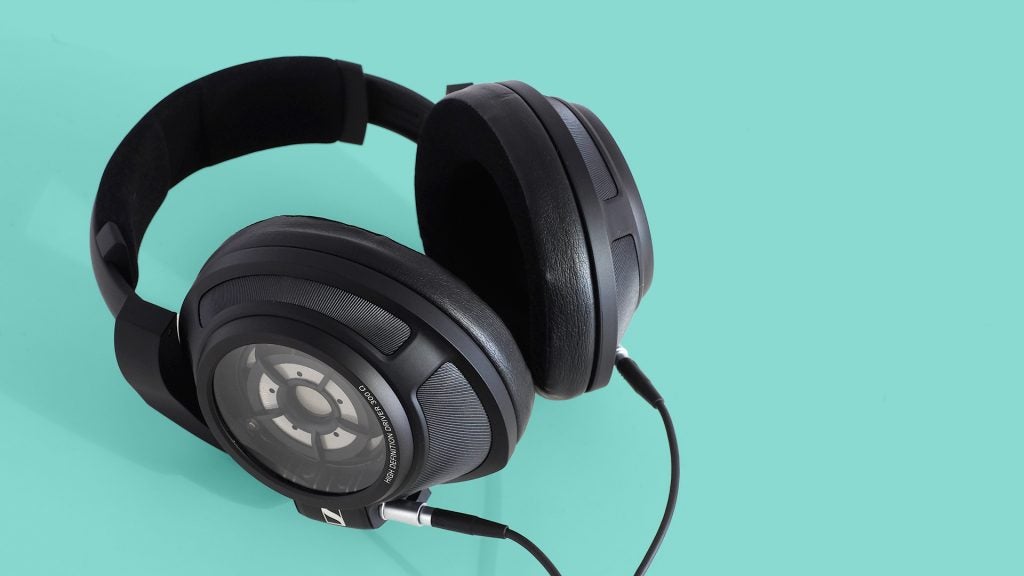 Why buy the Sennheiser HD 820?

The Sennheiser HD 820s are a great achievement in closed-back headphone design. They have properties usually associated with open pairs, and some of the practicality of a closed pair.

They don’t appear to be designed for the headphone purist. However, if you have the money to spend, on a suitable amp as well as the pair itself, the large soundstage and decent comfort is a great combo for movies and music use.

Top-class closed-back headphones, but some of the tuning decisions seem a little odd for headphones at this price.