The open-backed Sennheiser HD 598 headphones offer a jazzed-up take on the HD 595, which have been part of Sennheiser’s over-the-ears range for more than five years. They’re more visually striking than their predecessors, but anyone spending around £160 on headphones is probably going to care more about sound quality than a flash wood-texture veneer.

Few Sennheiser headphones look as eye-catching as the HD 598s. With a cream and brown colour scheme, they stand out clearly from the hundreds of black and grey cans that the market’s stuffed full of – including the new, slightly cheaper HD 558. The materials used in these cans are much the same as its brothers though. 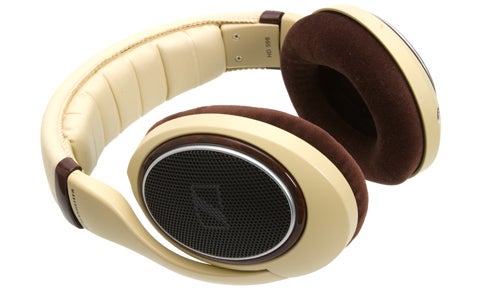 The main structure is made of plastic, the headband from foam and leather, the cups from fleece and metal grilles supply these ‘phones’ open backs. There are glossy “Burl wood” veneers that surround the speaker grilles and hem-in the leather part of the headband, but they’re purely aesthetic and shouldn’t affect the HD 598’s sound whatsoever.

The high gloss of these showy headphones may be a little artificial, but they feel as high-end as the £200 RRP suggests. The headband is luxuriously padded, and the use of real leather rather than leather-effect “pleather” plastic helps these headphones to pull of their bold looks – it’s missing from most of Sennheiser’s cheaper models. 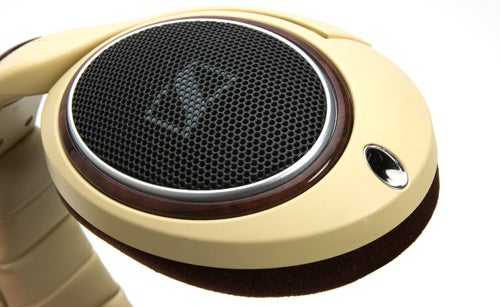 Unlike the Sennheiser HD 595 headphones, the HD 598’s cable is removable. A 2.5mm jack plugs into the headphone itself, while a twist-to-lock mechanism keeps the cable safely in place when attached – a simple yank won’t pull it out. At the other end of the cable sits a 6.3mm jack, but Sennheiser also includes a 3.5mm converter, so you can plug it directly into a portable MP3 player.

The cable’s 3m long – too long to take on the streets and not quite long enough for those with bigger lounges or bedrooms, so the removable cable feature is very welcome. Coated in rubbery plastic, it’s liable to tangle but this is much less of a problem with home headphones like the HD 598 than those likely to spend a good deal of time stashed in a bag or pocket.

The updated design of these headphones seemingly hasn’t added any flab, as they weigh the same as the original HD 595s – significantly lighter than the popular, more expensive Sennheiser HD 650s. They’re exceptionally comfortable, thanks to the team effort made by the padded leather headband, velour ear cups, lightweight construction and over-ear design. They do apply some slight pressure to the sides of your head, but they can be worn all day long, and all night too, without any discomfort.

The Sennheiser HD 598 are open-backed headphones, the speakers covered by a metal grille rather than solid plastic, metal or wood. Open headphones typically have a breezy and, perhaps predictably, more open sound than closed-backed equivalents, but often also offer less powerful bass.

These headphones have that open, airy sound but do not suffer from a lack of bass. The low-end has a lighter touch than the more expensive HD 650, but there’s easily enough to satisfy all but the most incorrigible basshead. Even when powered by a humble iPod Classic, they do justice to a bass-heavy dance track like Sleep Deprivation by Simian Mobile Disco. They are open, articulate and detailed – and seemingly effortlessly so.

We plugged them into a DAC and full-size headphone amp to see if they benefit from further amplication, and found that high-end resolution improved significantly and bass extension and presence improved. The Sennheiser HD 598 do not absolutely need a headphone amp to shine though – at 50 Ohms impedance they’re significantly easier to drive than the 300 Ohm HD 650s.

The now-comparably-priced AKG 701s offer a more analytical sound, with better high-end detail, but are also more clinical and cold-sounding than these fun cans. With a sound signature that doesn’t have an obsessive infatuation with eking out every last sonic detail at the expense of bass and power, these headphones are extremely versatile. 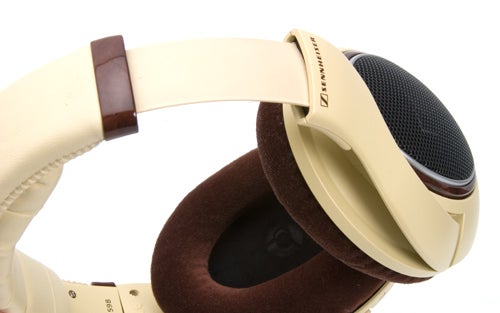 While musical performance is decent then, though sans headphone amp the HD 598s can leave lighter Classical tracks like Mozart’s 1776 Serenata Notturna sounding a little artificial, across broader types of listening they really excel. The meaty bass makes these headphones as good with movies, television and games as they are with music.

Whether in the latest dumb action blockbuster or an Xbox 360 shooter, explosions sound like they should with these headphones, with a proper bass rumble in-tow. This effect is further improved by the use of a headphone amp, and surpasses some more expensive, more refined cans.

If you’re planning on using the Sennheiser HD 598s as your all-purpose set of headphones, it’s important to also consider the issues that come with an open-back set. They leak sound significantly, so people around you will be able to hear what you’re listening to almost as well as you can. 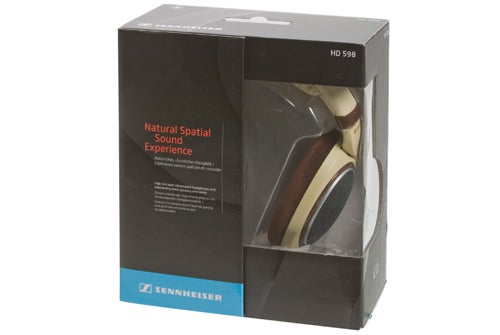 The noise of the outside world isn’t blocked-out fully at all either, so unlike a closed-back pair of headphones or set of IEM earphones, you’ll be able to hear people talking nearby and the rumble of passing traffic. These headphones are wholly unsuitable for use on public transport, and use within an office is borderline anti-social unless you keep the volume right down.

The £200 RRP of the Sennheiser HD 598s initially seems off-putting, when the HD 595s are now available for under a hundred pounds, but they are already available for just over £150 – making them an attractive alternative to the more expensive HD 600 and HD 650 sets.

Verdict
Call us boring, but we’re not sure we prefer the bold colour scheme of the Sennheiser HD 598 to the standard black and grey, but any qualms blew away once we donned these headphones. The open, powerful sound is extremely versatile and they’re comfortable enough to wear from morning to night, every day.