We’ve said it before, we’ll probably say it again – if all you care about is sound quality, you probably shouldn’t be looking for a pair of noise cancelling headphones. You’ll usually get better sound with a normal pair. But the Sennheiser CXC 700 are out to change all this. They cost just under £200, putting them in competition with some of the best universal earphones in the world.

Design
You probably wouldn’t guess their high price from a quick glance, though. The earpieces are made from a combination of black plastic and moody darkened silver plastic. They’re not as stylish as other CX-series earphones, such as the CX 980i, and there’s no real metal on show to give that glitzy expensive feel. 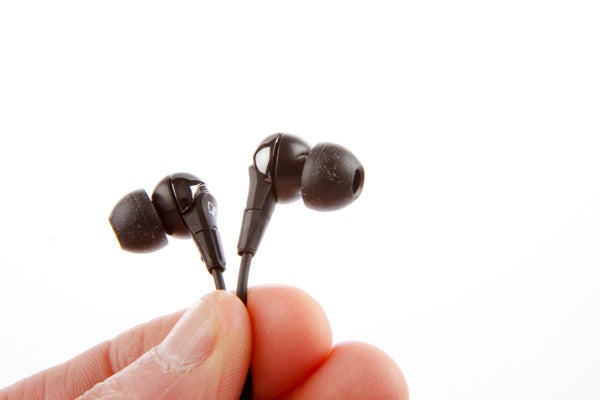 Comfort and sound quality are much more important than earbud aesthetics in our book, but there’s another design issue that’s less easy to ignore. Just over halfway down the cable sits a very chunky housing that powers Sennheiser CXC 700’s noise cancellation. Inside is a single AAA battery that lasts for up to 16 hours of noise-blasting.

All in-ear noise cancelling headphones use a battery box like this, but this example is particularly large and – surprisingly – not particularly well-made. The battery is kept in place with a cheap-feeling chromed plastic flap that doesn’t feel particularly durable, the shirt clip on the rear is a metal clip that’s not comfortable to use and the whole box feels disappointingly dumpy. 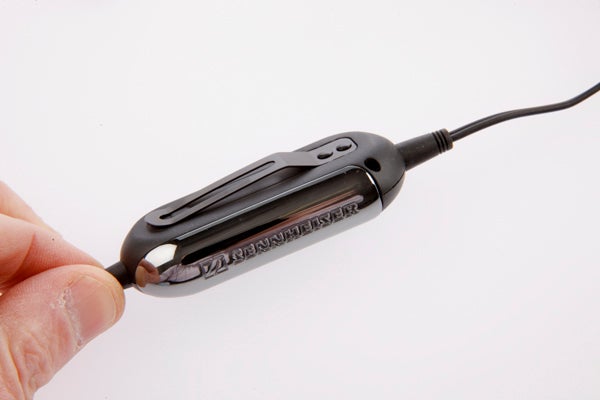 A last minute save is supplied by the length of the cable, letting you clip the box to a trouser pocket or waistband, rather than having to use a shirt pocket or sleeve. 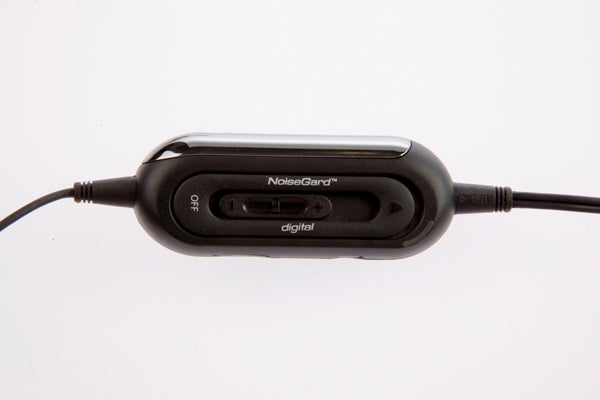 The battery housing does not double up as a remote controller for your music player, but does give you some control over the sound and noise cancellation. There’s a physical volume slider on its front, inside the power switch. Both again do not really feel like they belong on a £200 pair of earphones, though.

Two buttons are found on the controller’s side, too. These operate the Talkthrough function and switch between the three NoiseGard cancellation modes. The former is pretty common, letting you hear what’s going on around you with the aid of the inbuilt microphones, but the Mode button is less common. 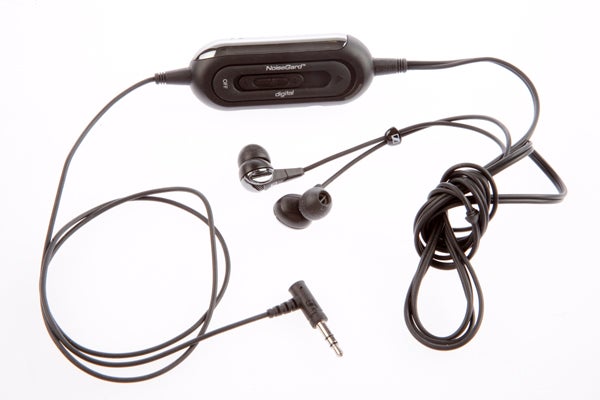 You can choose between three types of noise cancellation with the Sennheiser CXC 700. One deals with just low-end noise, one extends a bit further up the frequency spectrum and the last covers the whole frequency range for areas like offices where there’s likely to be more variance in noise. The modes that focus on lower sounds are more effective according to Sennheiser, though, so there is some thinking to be done about which mode to pick. However, we found the “all frequencies” option the most effective on the street and in the office.

A bit like the initially-confounding Sennheiser MM 550 Travel, this extra flexibility doesn’t exactly make them welcoming to use for technophobes. A red light on the front of the Sennheiser CXC 700’s battery box tells you when they’re operating, and it flashes a number of times are a press on the Mode button to let you know which mode it’s in. No, it’s not rocket science but headphones rarely demand as much concerted effort as these.

In the Sennheiser CXC 700’s favour, the Talkthrough mode is one of the best monitor modes we’ve heard in a pair of noise cancellers, with a comparatively clean and natural sound.

Noise Cancellation
After all the criticism the brains behind the CXC 700’s ANC has received, we’re pretty glad to report that cancellation performance is good. New to noise cancelling? There are microphones on the back of each earpiece, monitoring sound. An inverse waveform of ambient noise is then added to the earphone output to cancel it out.

The approach to ANC is a little different from the market leader Bose, though. It’s not quite as aggressive, resulting in less absolute seclusion from the outside world, although the Sennheiser CXC 700 are still among the best around.

As is the norm with noise cancelling headphones, they’re best at getting rid of low-end noise, such as the rumble of passing cars, the roar of tube trains and the intense hum of jet engines from within a jet’s cabin. It’s replaced with a light hiss that’s common to most ANC headphones. 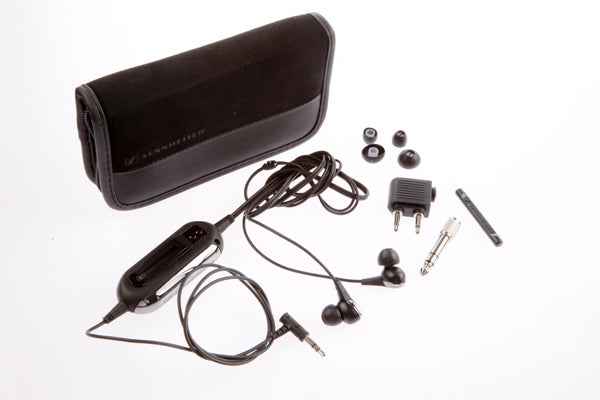 Bose’s QuietComfort 3 and 15 both offer more impressive, more absolute cancellation, and there is a marked difference in performance, but outside of the Bose borders, The Sennheiser CXC 700 are among the best. Conscious that frequent travellers are likely customers, Sennheiser supplies a neat purse-like carry case with the earphones, as well as a 6.3mm adapter, an airplane adapter and the standard three pairs of silicone tips. 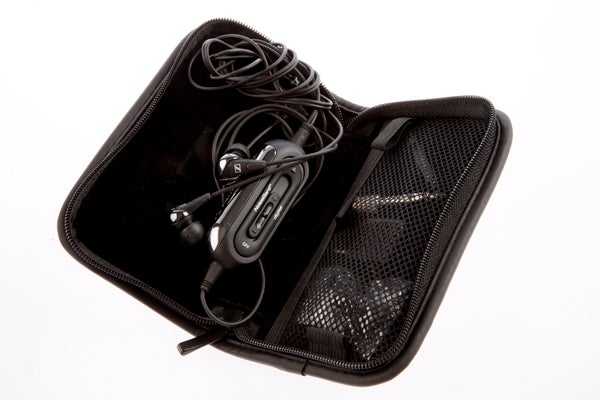 Sound Quality
There’s little difference in sound quality whether ANC is turned on or off, and in some respects the Sennheiser CXC 700 are the best noise cancelling earphones we’ve heard in a long, long time. Where many pairs in this “genre” offer a slightly soft, warm signature, these try for something rather different. 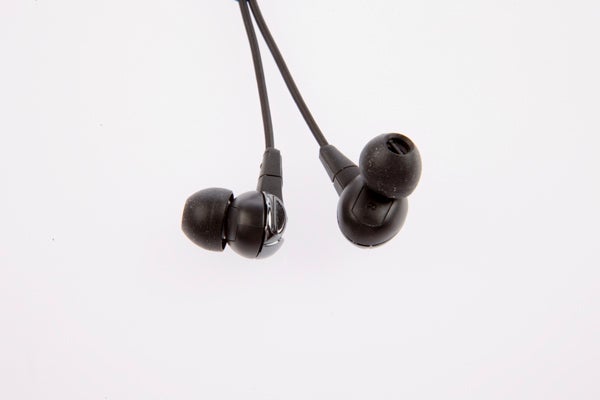 Detail recreation is a priority here, and the tonal quality is actually quite different from the Sennheiser norm. Often recognised for their forward mids, Sennheiser’s CXC 700 pair is an aberration.

For the most part, they’re far more insightful and detailed than most noise cancelling headphones. There’s a slight bass emphasis, but the low-end isn’t at all muddy. What does
characterise these earphones is an unusually prominent treble hump. And
this is what stops them from becoming truly high-end sounding.

The high-end imbalance frequently causes sibilance and harshness that cannot be excused in a £100-plus headphone, let alone a £180 pair. Almost Icarus-like, it would have ben better had they not tried quite to hard to offer such as detailed top-end. 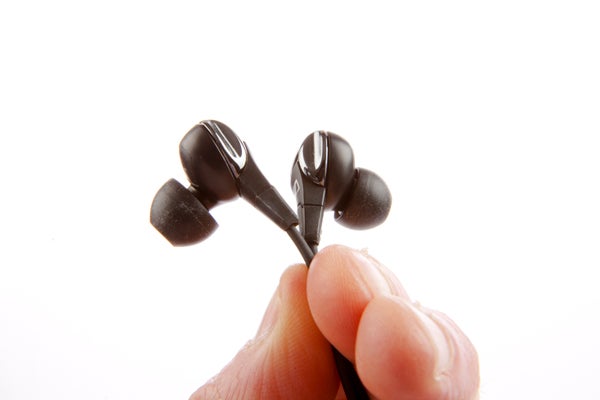 Value
Sennheiser makes a lot of good headphones, but all too often it comes unstuck when it tries to make a pair that’s not just about being a good headphone. We saw it in the Sennheiser MM 550 Travel, and it’s happened again too in the CXC 700. The battery housing is one of the most unwieldy we’ve seen and while the sound is great in some respects, it seems fatally flawed to us.

The Sennheiser CXC 700 active noise cancelling earphones are a “nearly, but not quite” effort from the headphone king. Noise cancellation is decent and they get closer to sounding high-end than the most ANC pairs, but a misjudged treble hump introduces frequent sibilance and the graceless control housing doesn’t cut it at this price.