You can usually separate MP3 player owners into three segments: those who are obsessed with getting the ultimate in sound quality from their players and will stop at nothing to achieve it; those who care but don’t want to spend too much cash; and those who listen to the £5 earbuds that come with their £200 iPod, and only replace them when they break.


Sennheiser’s latest headphones, the CX400, are aimed at the middle group. Though they’re not quite in the same territory as some of the top-end Shure or Etymotic headphones Riyad has reviewed in recent times, they are good enough to reward the extra investment over a pair of £20 upgrades – and they’re certainly better than the bundled earphones you get with most players.


They’re the successors to Sennheiser’s popular CX300 headphones, boasting improved bass, clarity and all the usual stuff you expect from an upgrade such as this. I’ve yet to find a pair of headphones that can match Shure’s offerings – such as the SE210s or even the older E2cs – at this sort of price, so I was interested to see how Sennheiser’s new babies measured up. 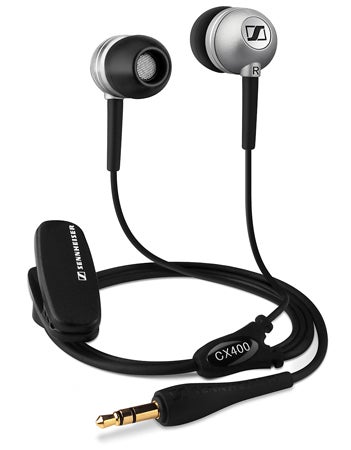 In the flesh, they’re certainly an impressive pair of headphones: the build quality seems pretty good – rubber sheaths protect the cabling coming from each earpiece – and they certainly look a lot nicer than the bulbous offerings that Shure offers in this mid-price sector, with silver sealed bodies and stainless steel rings wrapping each unit at its widest point.


They’re also among the most comfortable noise isolation headphones (canalphones to be more precise) I’ve ever worn. With most phones that go right down inside your ear canal, there’s usually a breaking in period where you get used to the way they feel, and the rubber or foam adapts to the shape of your ears – but that’s not the case here. The CX400s felt comfortable right from the off – they’re light and in my ears they hardly felt like they were there at all. And for anyone who the standard medium rubber flange doesn’t fit, there are a couple of extra fittings in the box – a small and large pair. With the CX400s pushed as far down inside my ears as they would go, noise isolation was pretty decent too: on a noisy London tube train I was able to listen to quiet classical and jazz music without having to turn the volume right up.

It’s also nice to see that you get plenty of extras in the box. With most headphones you’re stuck with a cable that’s either too long and dangles out of the bottom of your jacket as you walk along, or too short and won’t reach to the pocket you want to stash your player in. With the CX400s you get the best of both worlds: the stock cable is just 70cm long – perfect if you hang your player around your neck or pop it in an inside pocket; and if you want something longer, you simply plug it into the extension supplied. 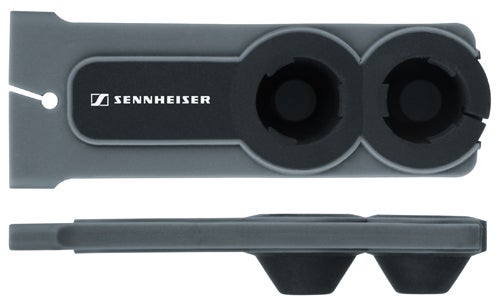 In addition to the extension cable you get a small pouch and also what can only be called a rubber ‘dongle’ which has a couple of holes in it to plug the earpieces into to give added protection. You can also wrap the cable around the tail of this rubber implement to stop it from tangling itself in knots in your pocket and there are a couple of slots – one at each end – to prevent it all from unwrapping. You also get a shirt clip thrown in, but iPhone fans will be disappointed to see that Sennheiser has chosen not to throw in an iPhone adapter.


I always like to see manufacturers take the time to think about what else they include in the box as there’s nothing worse than spending a packet on something luxurious then finding out you have to immediately go out and spend more on accessories. However, focusing on the extras is a fairly pointless exercise if you don’t get the basics right, and with headphones like these that means sound quality.

Sennheiser’s long experience shows through instantly here and the CX400s impress straight from the off with loads of volume and a punch to make Ricky Hatton envious. Compared to my now-ageing Shure E2c they attack your eardrums with more energy, more control and more bite. They kick hard, they stamp on the floor and they thump the desk like an angry newspaper editor at deadline time.


Listening to the Scouting For Girls’ fantastically energetic track – ”She’s So Lovely” – demonstrates this dynamism perfectly, with the drums feeling as if they’re pounding out a beat inside your head. The metronomic bass and piano notes underlying the infectious track, ”Heartbeat”, drive the music on with the insistence and power of a pneumatic drill. Scottish rockers Biffy Clyro’s album ”Puzzle” is a revelation on the CX400s, with the guitar and basslines driving the music forward with immense weight and power.

Clarity is excellent, too, but without ever getting so harsh or sharp that the music becomes tiring to listen to. The acoustic twang of Newton Faulkner’s guitar on his excellent album ”Hand Built By Robots”, for instance, is delivered in an unfussy yet precise manner that many heaphones (the iSkin Cerulean X1s included) just can’t match, while the high-pitched falsetto on Sigur Rós’ haunting ”Heim” album is pure-sounding without ever getting too screechy.


If there is one area of weakness it’s to be found in the area of mid-bass, just above the grumbling lows characterised earlier and just below the peak vocal ranges, where it sounds as if there’s a slight dip in the CX400s response. They also sound a touch artificial at times. Newton Faulkner knocks out the rhythm on the front of his acoustic guitar as he plays, and this didn’t quite sound as realistically wooden as it did on my old Shures.

But if quality of bass is what you’re into there’s nothing at this price that’ll come near these Sennheisers. It has a solid, almost tangible quality that makes you feel you could almost pick it up and take a bite, yet it’s not unbalanced, and rarely overwhelms the rest of the music. Compared to the Cerulean X1s I reviewed at the end of last year – which impressed me in this respect – they’re simply in another class.


It’s quite astonishing what £40 will buy you in terms of sound quality these days and these Sennheiser CX400s are among the best deals you will come across. They’re not quite the last word in fidelity, and if it’s the last word in realism and atmospherics you’re after they can’t match a pair of Shures.


Ultimately, though, it comes down to a matter of preference, and if you’re after a pair of headphones whose strengths lie in pure punch, power, and bass thump, these are a very good buy indeed.