Sega sticks the landing with what proves to a fantastic throwback to one of gaming's most beloved consoles. A few missing classics and an irritatingly short controller lead prevent the Mega Drive Mini from reaching its full potential, but fans of retro gaming will feel right at home here.

What is the Sega Mega Drive Mini?

Ever since Nintendo dove into the plug-in-and-play market with the NES Mini, gamers of a certain age have been waiting with baited breath to see which other classic consoles could be given a new lease of life. After the unmitigated disaster that was the PlayStation Classic, Sega is the latest company to show its hand with the Mega Drive Mini (or the Genesis Mini if you’re living Stateside).

Given that Sega has been re-releasing its Mega Drive library on other consoles for years now, the question isn’t only whether or not the Mega Drive Mini is a worthy purchase against other plug-in-and-play systems, but is it worth getting over say, the more affordable Sega Mega Drive Classics bundle on consoles? 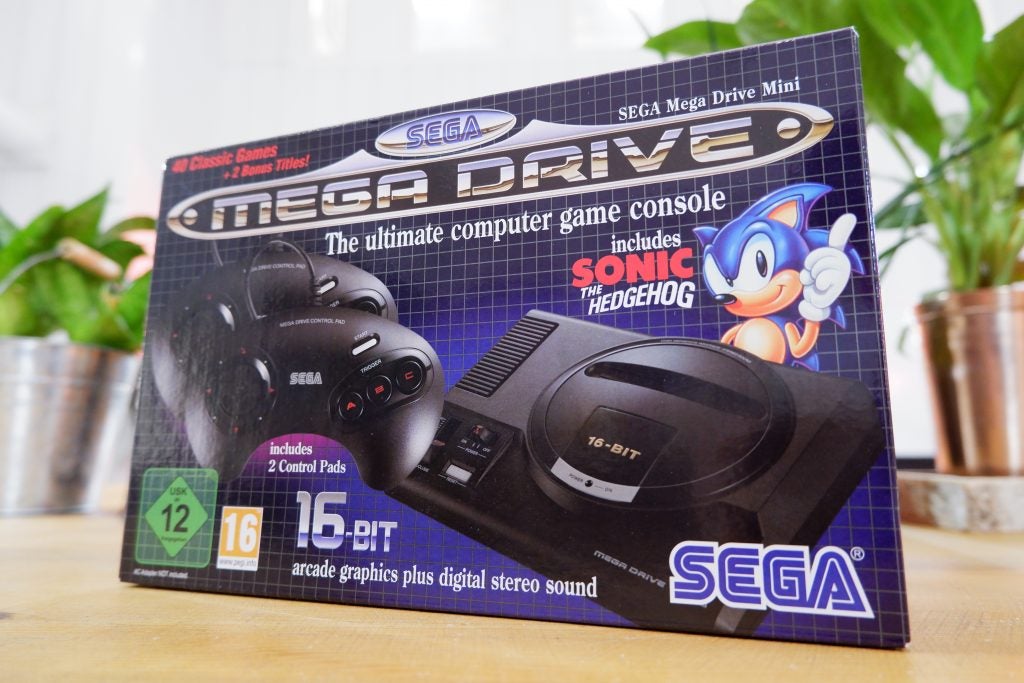 There’s a grand total of 42 games on-board the Mega Drive Mini, eclipsing a whole range of genres, although given the limitations of the 16-bit era, there’s a hefty dose of platforming to go around. You’ve got undeniable classics like Sonic the Hedgehog, Ecco the Dolphin and Virtua Fighter II, but there’s also a handful of licensed games that have not seen the light of day since the 90s.

Titles like Earthworm Jim, Castle of Illusion and my personal favourite, World of Illusion starring Mickey Mouse and Donald Duck (yes, that is its full title). World of Illusion remains one of the best co-op platformers from the Mega-Drive era, so it’s amazing to know that a whole new generation of gamers will get to experience its charm.

Plus there’s the fact that also comes with Dynamite Headdy which, to me, remains one of the most criminally under appreciated titles from the original system. Just imagine a better version of Rayman with the self-aware comedy of Undertale and you’ve got a pretty solid image of the game.

If you find yourself feeling like this all has a sense of déjà vu, let me reassure you – you’re not alone. The Mega Drive Mini is the first physical (and official) emulator from Sega itself, but there have been several unofficial Mega Drives released over the last few years, some with the ability to also play original Mega Drive cartridges.

While I’m glad that Sega finally took a stand and funded an official device, I am slightly dismayed that the company didn’t elect to also implement a fully-functioning cartridge slot. For collectors or previous Mega Drive owners (such as myself), this could be a killer feature, especially in the face of Nintendo’s miniature consoles. 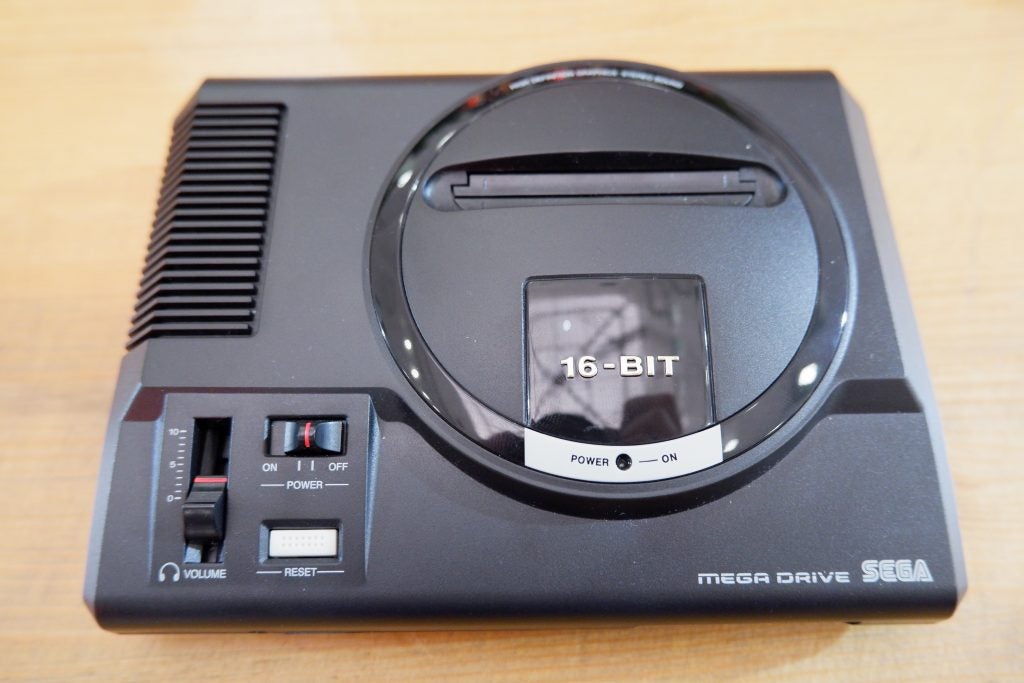 Just as with the PlayStation Classic before it, the Sega Mega Drive Mini also falls victim to having some notable omissions from its mostly fantastic library of games, the most obvious of which being Disney’s Aladdin and Mortal Kombat.

Due to its industry leading animation (at the time), Aladdin went on to be the third best selling game on the system, while Mortal Kombat’s now infamous ‘blood code’ became the stuff of playground legend, cementing the Mega Drive’s badass attitude in the face of Nintendo’s family-friendly approach.

If you can overlook those issues however, there’s a lot to love about the Mega Drive Mini. For anyone who grew up with Sega’s historic console, simply laying your eyes on that familiar design can feel like an emotional event. There’s an unquantifiable amount of nostalgia in seeing the Mega Drive brought back to life, and Sega has absolutely nailed the look and feel of this thing. It still boasts the now laughable claim of having ‘High Definition Graphics’ by the faux cartridge slot. 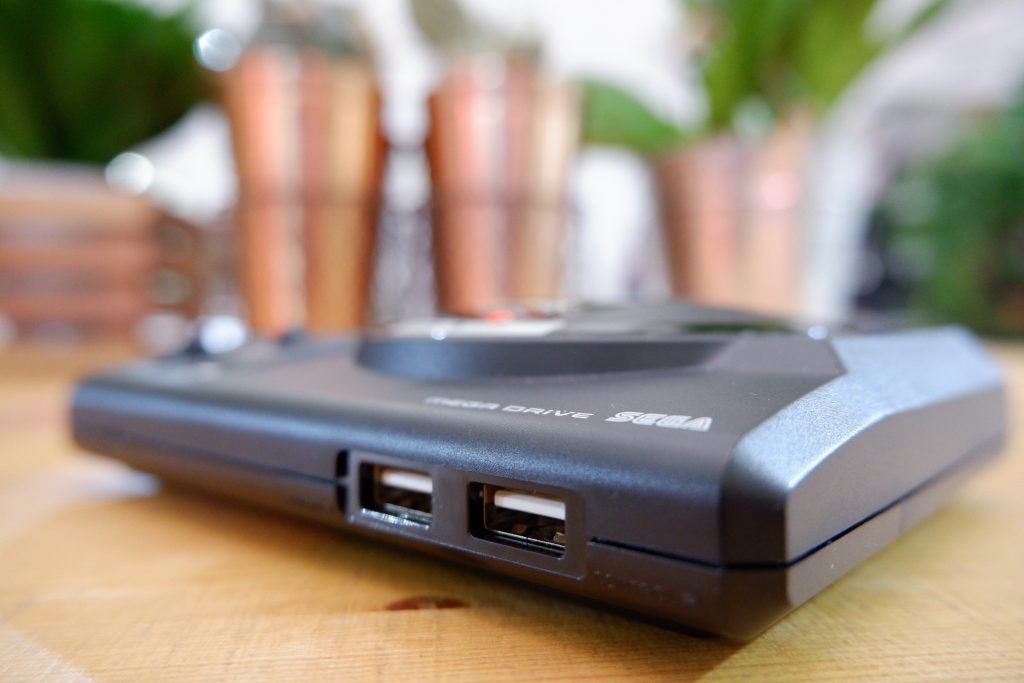 That goes for the controller as well, which, whether you love it or hate it, is back in all its three-button glory. As you might expect, there’s a second controller included to have a friend join in on the fun, and given that a fair amount of the games here offer multiplayer, you’ll be in for a great time. In fact, playing with a friend might be a necessity due to the unwavering difficult of some of these titles (Altered Beast, I’m looking at you).

Don’t get me wrong, I’m well aware that the ‘challenge’ was selling a crucial selling point of almost all 16-bit titles, ensuring replayability and value for money. Even the though the Mega Drive was my very first console, this fact showed little evidence upon booting up the Mega Drive Mini.

Tried as I might, I could not get to the end of the first level in Strider. Even worse, upon my first playthrough of Alisia Dragoon, I lasted a grand total of 20 seconds before I was hit with a game over screen. The whole affair seemed so distant to the comparatively relaxed nature of modern gaming that it had me wondering if today’s young gamers might be put off. The jury’s still out, but I wouldn’t recommend buying the Mega Drive Mini for anyone under the age of five. 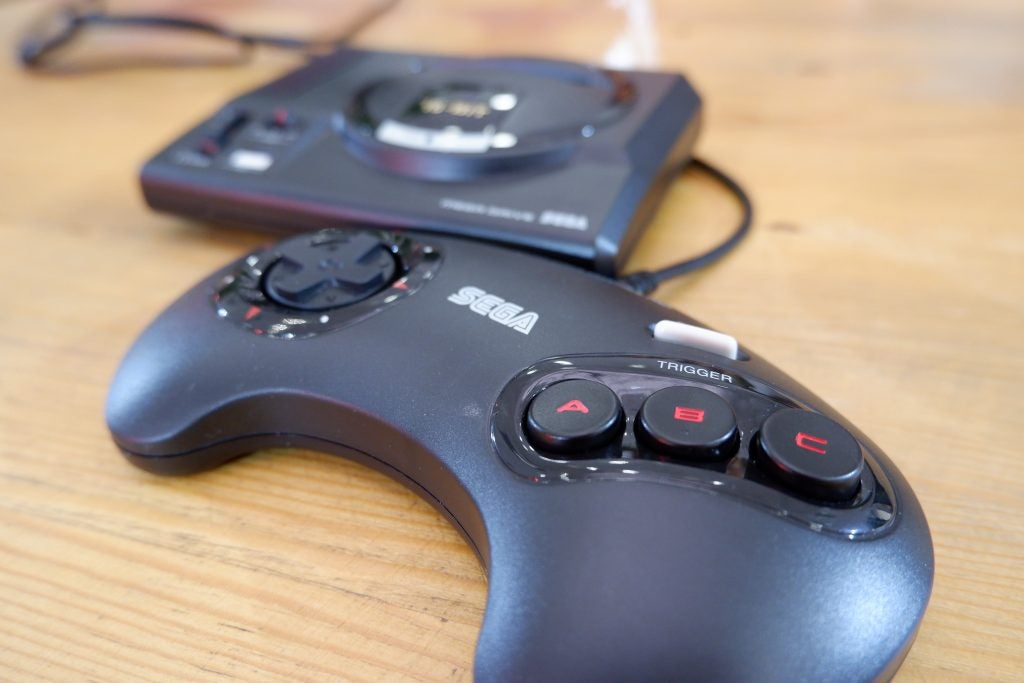 Still, there’s one crucial addition to the Mega Drive Mini that feels like an absolute gift from the gaming gods: the ability to save your progress at a moment’s notice. 90s kids will remember that, unless a game had a dedicated password system, a ‘game over’ meant going straight back to the title screen, and thus, felt like a digital slap in the face. Being able to forgo that same misery is almost worth the price of admission alone.

It’s also worth mentioning that the wire connecting the controller to the console is a little on the short side. It’s an issue we also had with the NES Mini and it’s a shame to see that Sega didn’t feel the need to take note. Then again, I haven’t had to play sitting on the floor since the Mega Drive days, so maybe it’s all intentional.

Should you buy the Mega Drive Mini?

As a love letter Sega’s most prolific gaming console, the Mega Drive Mini hits all the right beats and will feel right at home with those who grew up with the blue blur, but with a few notable titles missing and the lack of a dedicated cartridge slot – previously found on unoffical yet commercially available replicas of the console – prevent it from being an absolute home-run.

Still, the inclusion of a smooth widescreen mode and the ability to save your progress at any time makes ensures that the Mega Drive Mini is best way to relive one of video game history’s most important and influential consoles.