The Sega Mega Drive Classics is a collection of classic titles from what many believe to be the golden era of gaming. With it you get over 50 nostalgic nuggets of joy made famous by the Mega Drive many moons ago. It’s a shame it’s not on the Nintendo Switch as being able to take the classics on the move would be excellent, but hopefully that’s something to look forward to in the future. Either way, this is a super fan’s dream.

Featuring Sonic The Hedgehog, Streets Of Rage, Golden Axe, Virtua Fighter, the long forgotten Columns and a ton more, you’ll instantly fall in love with this if you’re any kind of retro nut. It’ll never truly make sense of why seeing Tails on the Sonic title screen is so exciting, but every time I do, I feel my inner-child suddenly come roaring back to life.

In many ways, just being able to play this on a new console would be enough, but Sega has ensured to go a step further in order to justify the package. The first is the most obvious, and that’s some minor tweaks to ensure it looks the part on your 4K television. None have lost their old-school feel and really you won’t notice any difference – each game simply runs how you think they used to even though the originals barely have a framerate these days – and there is something pleasant about seeing the likes of Wonder Boy In Monster World being on a modern, big screen. This isn’t out of the ordinary for such collections, but that doesn’t mean it’s not enjoyable. 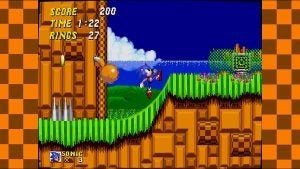 The additions of things like online play – to compatible games – are also a real treat that weren’t possible 30 years ago. Being able to take advantage of the internet in Sonic The Hedgehog 2 is almost mind-blowing. This is also true when talking about the horizontal flip mode which has also been included. Doing exactly what it says on the tin, you can now play every title with the screen mirrored which, in one sense, makes certain entries here feel brand new. The mode’s unashamedly aimed at those who have played the games to the point they can complete them in their sleep, but it does introduce a whole new dimension and, for many, will be enough to justify yet another playthrough. Any muscle memory goes right out the window when left is right and up is down. It’s a simple but smart extra.

Re-finding that sense of challenge is key with Sega Mega Drive Classics, too, which is why Sega has also included a bunch of Achievements and Trophies. The added incentive to do better works a treat – trust me, if you want to platinum this you better have the patience of a saint. Old games in general are far harder than the modern crop we get, but adding in specific tasks that don’t necessarily match up to the original target can make them nigh-impossible, in a good way.

My only real criticism is the choice of games, which may not be to everyone’s taste. Sonic The Hedgehog 3 is nowhere to be seen, and entries such as Light Crusader probably aren’t going to be as appealing as Ecco The Dolphin. That said, Ecco has popped up time and time again over the years, and really, you’re never going to be able to please everyone – it’s the nature of the beast. You’d also have to imagine that before long we’ll get a sequel to this where your favourite finally gets its due. It’s just a matter of waiting. 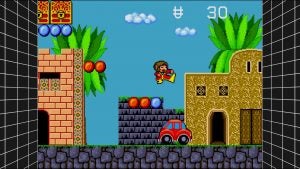 Overall though, the Sega Mega Drive Collections is a very nice package that treats its source material with love and care to appease older gamers that remember the period fondly. Those who missed this span entirely and have an open mind should also get a kick out of it, but let’s not pretend this isn’t aimed at those in their mid-30s who smile every time they see Sega’s third console.

Designed to whisk you back to younger days, this is ideal for anyone wanting a retro fix without having to dig out archaic machines from the attic. And Altered Beast is on it. Thank goodness…

Sega Mega Drive Classics is a very well put together retro collection that takes a group of games that are well remembered and drags them into the 21st century. It’s not going to overly surprise, but nor is it meant to.