Available on PS4 (version tested), PC
I’ve been wanting to play Secret of Mana for the best part of 25 years. When it appeared back in the early nineties it was one of the first JRPGs to have any kind of impact here in the UK, arriving on the SNES at a time when even Final Fantasy was only accessible to those with an import console. Back then it seemed like some impossibly exotic vision; a cross between the epic fantasy of Final Fantasy IV (Final Fantasy II in the West) and the more easy-going action/adventure of Legend of Zelda: A Link to the Past. Copies were expensive and hard to come by, and while I’ve played chunks of it on virtual console, I’ve never found the time to make a serious attempt on the game.

For me, then, this new PS4 remake is an opportunity to make up for lost time and – to be honest – a mild disappointment. In the past few years we’ve seen remakes that have taken old classics and brought them bang up to date, fixing old issues and polishing what was already great. Others have given the old game an HD makeover while trying to stay true to the original experience, upscaling and enhancing the visuals but leaving the gameplay intact.

Secret of Mana doesn’t really take either approach. In fact, I’m not sure what it’s trying to do. What we’re left with is a game that works as an enjoyable retro action-RPG, but that no longer holds up as a classic.

That’s a shame. On release, Secret of Mana was a pretty radical piece of work. The plot – small village outside finds magic sword, becomes embroiled in imperial conflicts – isn’t too unusual for a JRPG of the era, but this one plays out in real-time, with turn-based fighting replaced by single-button stabs and slashes, and the usual party switched out for a trio of heroes you could see on the screen at all times. You can switch between your protagonists at will, with the ones you’re not controlling managed by the CPU. This and the absence of invisible, wandering monsters – you can always see the local hostiles on the screen – gives Secret of Mana a faster, more action-oriented pace. 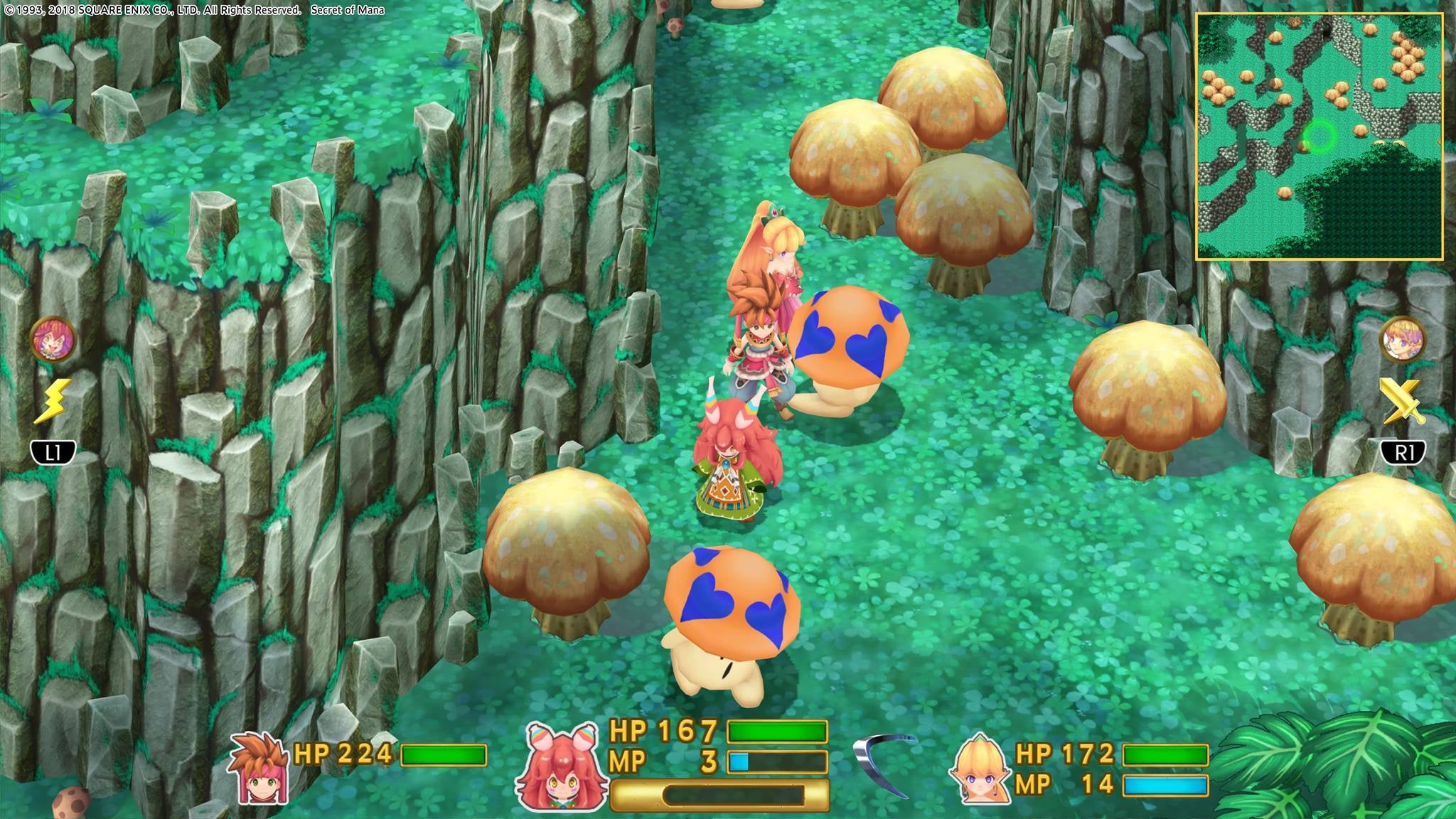 Square was also smart enough to simplify its systems. Each of your heroes battles monsters, levels up and grows more powerful, but there are no skill systems to worry about and most of the progression happens with zero intervention. There are just nine weapons, eight of which anyone can use, and you get better at using them just by using them, while they evolve over time through collectible orbs and a travelling Dwarven blacksmith.

Two of your heroes – a feisty, pint-sized Sprite and a rebellious kung-fu fighting debutante – gain magical powers, but even these are elegantly worked around a growing retinue of elementals, each providing three spells to the sorcerer in question. And you can switch between weapons, select spells, use objects and even change your armour using a set of speedy radial menus, with the option to allocate spells or items to two shoulder-button shortcut keys.

Now, Secret of Mana used to have a lot going for it, and in some ways it still does. The plot is lightweight but charming, putting the heroes and the legendary Sword of Mana against an evil empire looking to revive a colossal death machine. Your three protagonists are charming, especially now that they pause for a quick chat every time they get some shuteye at the local inn. As with many JPRGs of the era, there are some amazing moments that are lovable, funny or plain weird.

It’s not hard to understand why so many people have so much affection for this game. What’s more, there are some improvements, including a sensible, modern autosave system that takes some of the heartache out of dying. 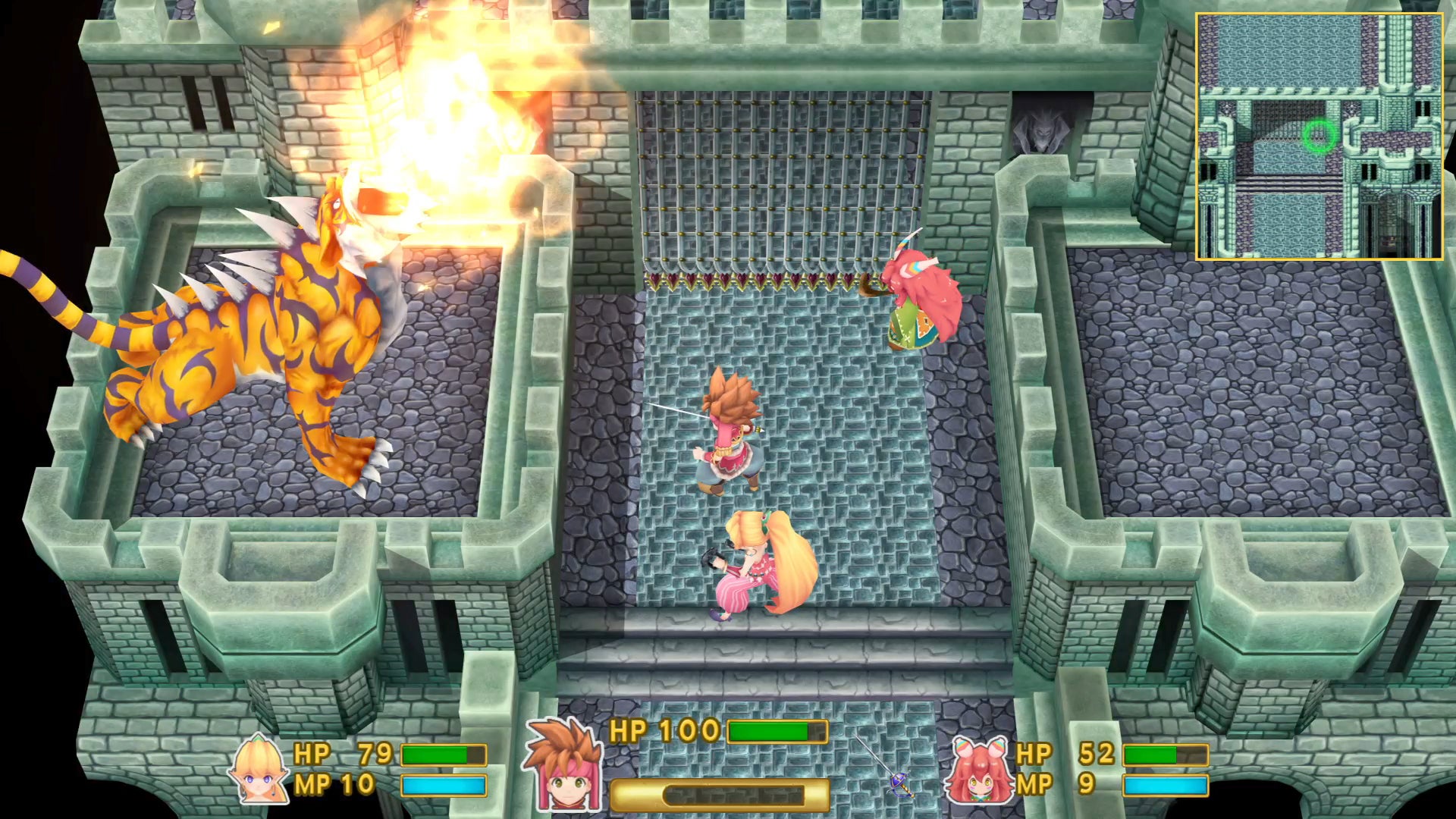 Yet Square-Enix has made some strange and disappointing choices here. The visual style, for example, seems like an attempt to capture the character of the original’s sprite-based graphics using polygons, but the result is neither here nor there. It’s very bright and very colourful, with nice HD textures and clean, cartoon lines, but it’s closer to a 32-bit PlayStation or Sega Saturn RPG than a modern game. It doesn’t help that while characters are voiced, there’s no lip movement, just a lot of gurning and pantomime gestures. Don’t get too excited by the wonderful, hand-drawn anime introduction; it’s the most exciting thing you’ll see of the whole game.

Secret of Mana can also be infuriating. Monsters spam you with annoying special abilities, or take potshots at you from inaccessible locations. The CPU-controlled characters are dumb and need their health micro-managing, or you’ll spend half your time and some expensive potions trying to revive them. There are menus to customise their target choice and behaviour, but the options are primitive. I love the way the minimap uses the scenery from the original 16-bit version, but it doesn’t really give you all the info that you need. And why not allow more shortcut keys, particularly when switching characters to cast specific spells can be a pain?

There’s also a lot of repetition here. A lot of wandering around the same maze-like wilderness areas, making return visits to the same mystic palaces and dungeons. As much of the scenery inside specific regions looks the same, this isn’t always that enjoyable. Other modes of transport cut down on the backtracking later in the game, but the first five hours or so are full of moments where you’ll be moaning ‘Seriously? There? Again?’ 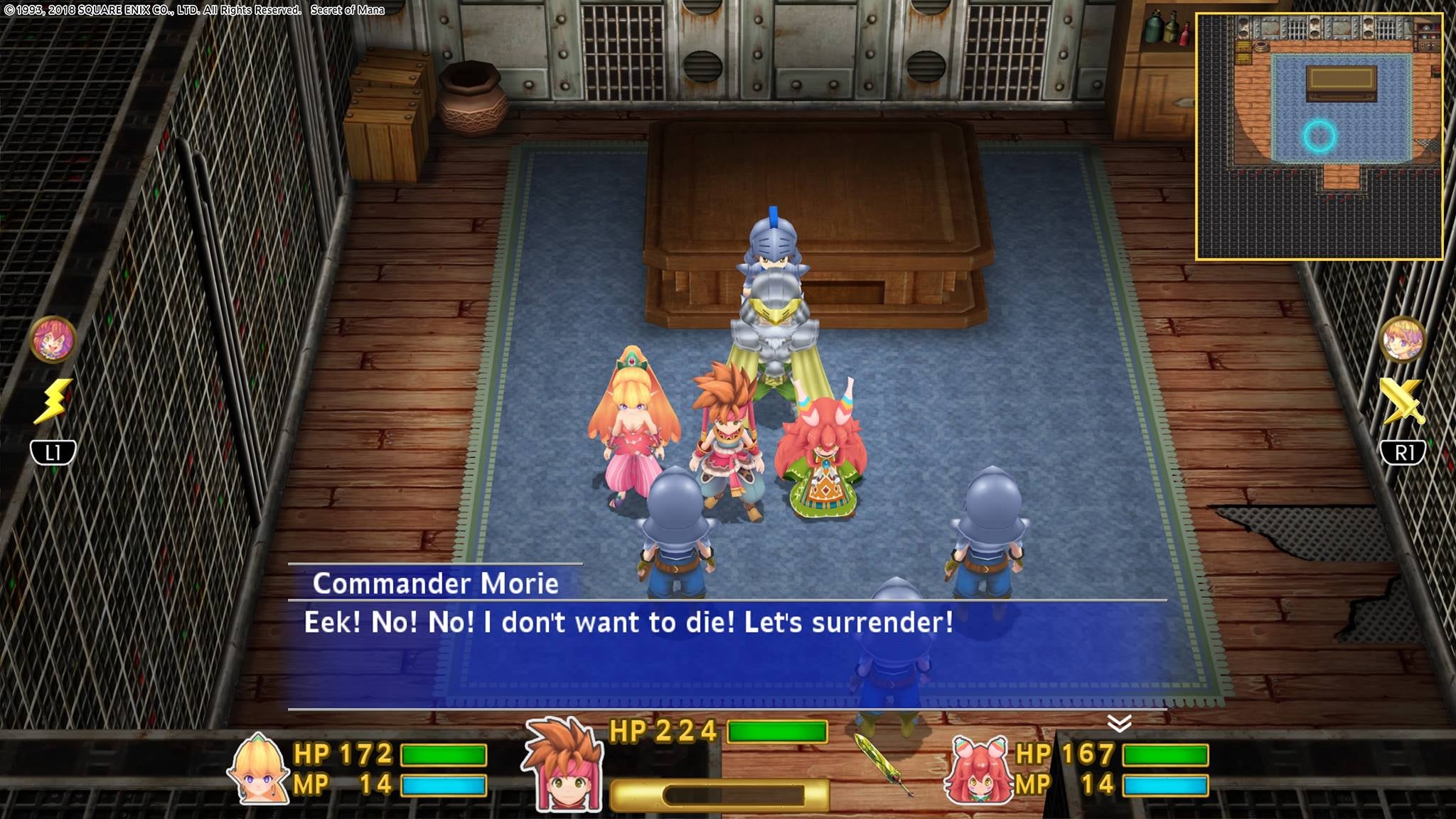 But the biggest secret here – the one I feel I ought to whisper – is that the core combat is often boring, bringing the whole game down. You have just one move available per weapon, with its success and damage controlled by a steadily refilling percentage gauge. Keep spamming the attack button and you’ll get nowhere, encouraging you to run in, whack your target, then run out while the gauge recharges. This wouldn’t necessarily be a problem, but even weedy monsters take a lot of punishment, meaning nearly every brawl drags on and on. Fight the more powerful beasties in groups or a series of battles and the whole game slows to a tired, unengaging plod.

There are elements of strategy in your choice of weapon, the spells you use and when you heal, charge in and evade, but there’s no getting past the fact that the combat is a chore. In fact, the more I played, the more I had to ignore the temptation to just run past the bloody monsters, particularly as they respawn every time you re-enter a room. I ended up settling into a regime of grinding them down for experience then stocking up on items, triggering the autosave then springing through the dungeon for a clear run to the boss. I’m pretty sure that Secret of Mana was not intended to be played this way.

It also says a lot that what I thought would be the game’s biggest selling point – two to three-player co-op play – turned out to be another damp squib. For one thing, you have to stay within a fairly short distance of each other. For another, nobody could be persuaded to play it with me for more than an hour or so.

Verdict
I hate to be a downer on a classic RPG, especially when Secret of Mana can be so charming and it’s still clear why it was such a well-loved game. Yet this remaster doesn’t work. On the one hand, it’s lost the look and feel of the original classic, so if you’re looking for a slice of RPG history, look elsewhere. On the other, the core, combat-heavy gameplay doesn’t really work for a modern audience; the fighting’s either aggravating or plain dull. Put it all together an you have a retro RPG that’s fun in places, but that wears away at your enthusiasm over the long haul.