In other respects the 7200.10 is a conventional SATA300 hard drive, with a 7,200rpm spin speed and support for NCQ (Native Command Queuing) so we’re going to dwell on the areal density and 750GB capacity throughout this review. 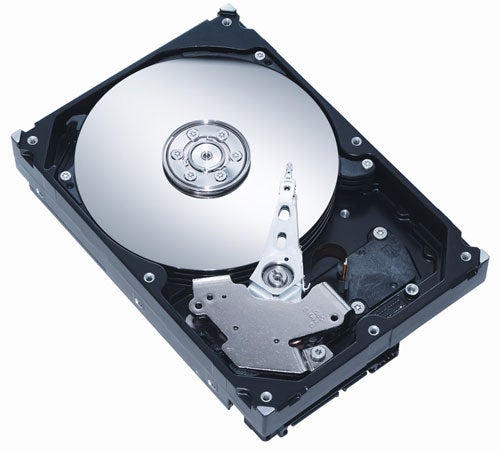 
Seagate’s previous holder of the capacity crown was the 500GB 7200.9, which also used a four platter/eight head design to give an areal density of 125GB per platter. You always get some variation of platter density across a family of drives in order that models can be sold with a nice round number of Gigabytes of capacity, and in this respect the king of the 7200.9 family was the 160GB version which was a single platter design.

The 750GB 7200.10 is the version which has the most capacity per platter, but while the headline capacity figure of 750GB is certainly eye-catching, the areal density increase isn’t as great as you might think. It’s a step up from the 160GB/platter of Barracuda 7200.9 to the 187.5GB/platter of 7200.10 but it’s relatively modest when you consider that this is supposed to be the start of a new generation of hard drive technology.


When I looked at the 500GB Barracuda 7200.9 in January I reported that I had some problems with the SATA300 interface.


At the time I assumed that the problems could be laid at the door of a pre-production drive (the 7200.8 model code had been crossed out and adjusted to 7200.9 with a biro) but there was the possibility that a chipset incompatibility also played its part. As a result I built a revised test system for the Barracuda 7200.10 with a Sapphire PC-A9RG580Adv motherboard with Radeon Xpress 3200 chipset, FX-60 CPU, 1GB Corsair PC3200 RAM and a 150GB WD Raptor hard drive running on Windows XP SP2. I plugged in the test drive as an unformatted unit and ran HD Tach 3. After that I formatted the test drive and transferred 4GB of files from the Raptor to the test drive and back again. Finally I installed Windows XP SP2 on the test drive and ran PCMark05.

Comparing the 7200.10 with the 7200.9, I found that the 7200.9 continued to be unimpressive and I’m still sure there is still some sort of problem with our test unit as the Windows installation routine couldn’t detect the drive properly so we couldn’t run PCMark05. In the other tests the 750GB 7200.10 was a significant improvement over the 7200.9 and it also compared well with a WD2500KS drive that I had to hand. On paper the Barracuda 7200.10 appears to perform as well as the WD Raptor 150 that we reviewed here.


I have no doubt that the latest test figures were helped by the fact that I used the 150GB Raptor in my test system as it raises system performance and reduces the chance that the hard drive is a bottleneck in performance.


My only criticism of the new Seagate was that it was relatively noisy in operation. Seagate states that the drive uses a ‘SoftSonic motor…(that)… enables whisper-quiet operation’ and while the drive is quiet as it spins it makes a fair amount of noise when the actuator kicks in during seek operations. It also runs fairly hot with a measured temperature of 47 degrees C on the outside of the casing as it sat on my test bench. Generally speaking a new monster drive carries a significant price premium but that just isn’t the case with the 750GB Seagate, which costs £275.


By any standards those prices are amazingly low and as far as we are concerned they drive a stake through the heart of RAID 0 as no-one can possibly need to stripe drives together to bump up their storage capacity to an acceptable level.


Perpendicular recording raises the capacity of the Barracuda 7200.10 to a monumental 750GB, yet pricing and performance are both very good. A sure-fire winner from the world’s largest hard drive manufacturer.