External hard disks are useful little items. If you like the idea of backing up large chunks of data from multiple computers, having a large capacity hard disk that you can carry around with you is a great solution. Despite the fact that I think NAS appliances are the best option for external storage in most cases, a plug-in external hard disk is a far easier solution for the novice, and you can transport it between locations. 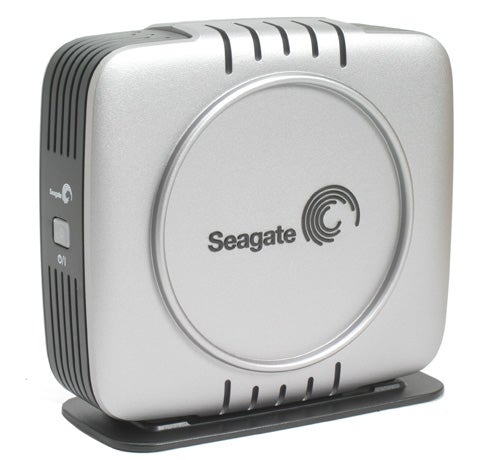 About a year and a half ago we looked at a 400GB external hard drive from Seagate that could connect over USB 2.0 or FireWire, and we liked it so much that we gave it a Recommended award. Now I have a 500GB external hard disk from Seagate, but this one uses an eSATA interface, which should offer lightning fast performance. 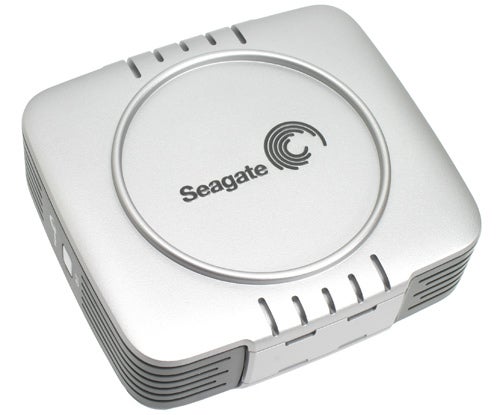 Of course the ubiquity of USB and FireWire ports make external drives that use those interfaces all the more usable, but there has been a lot of recent movement towards eSATA. More and more of the motherboards that make their way into the TrustedReviews lab come equipped with an eSATA port, while many sport two. This means that soon you should be able to plug an eSATA drive into most PCs, which will hopefully make the standard as common as USB.


But Seagate is well aware that there are a great many users out there who will not have an eSATA port on their PC, and has addressed this issue by bundling a Promise eSATA controller PCI card. The decision to use a PCI card instead of a PCI Express card makes this drive a viable option for a far wider audience. Let’s face it, a fast external drive will be a bonus even if you’re running an older PC – in fact if you hook it up to a machine with a basic IDE drive inside it, the external disk will be faster than the internal one! 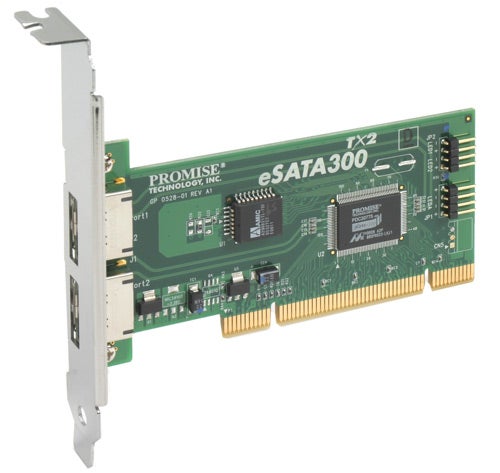 Installing the PCI controller card was simple enough – just crack your PC open and whack the card in a spare PCI slot, then it’s just a matter of loading the driver from the supplied CD. For comparison, I also plugged an eSATA header into one of the SATA ports on the motherboard and ran the same tests over both connections. The results proved pretty interesting – while copying a very large single file took almost exactly the same time over the motherboard SATA controller and the PCI card, copying a plethora of smaller files was significantly faster over the Promise PCI eSATA controller.

I hooked the eSATA drive up to a PC with a clean install of Windows XP on a 500GB Seagate Barracuda 7200rpm SATA hard disk – pretty much the same disk that’s inside the external eSATA box. Copying a 3GB single file from the internal hard drive to the eSATA disk took one minute five seconds using the SATA controller on the motherboard, compared to one minute six seconds using the Promise PCI controller – almost identical. Reading the same file back from the eSATA drive took one minute 16 seconds using both interface types. I also ran the same test using a 400GB Seagate external hard disk connected over USB 2.0 – the results were two minutes six seconds for the write and two minutes five seconds for the read. So, the eSATA drive is almost twice as fast as its USB cousin. 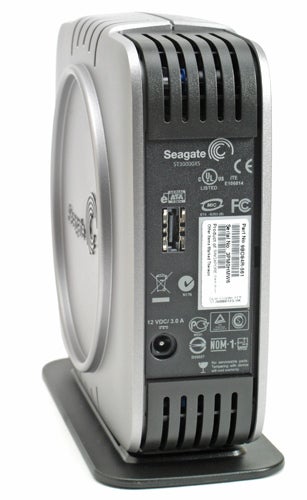 Of course the characteristic of moving one large file is very different from moving lots of smaller files. I therefore decided to copy 716MB of 8-megapixel digital images from the PC to the drives and back again. This time the eSATA drive was far quicker at writing when connected to the Promise PCI controller than when it was connected to the motherboard’s SATA controller – 16 seconds compared to 26 seconds, while the USB drive took 31 seconds. Reading the digital images back from the eSATA drive took 21 seconds using both the Promise controller and the motherboard SATA controller, while the USB drive trailed at 36 seconds.


So, it’s clear that the eSATA drive is considerably faster than an equivalent USB device, but not by quite as much as I would have expected. But all this really means is that USB 2.0 is a reasonable interface for I/O devices, and it’s also worth remembering that the time differential between eSATA and USB will increase if you’re copying larger amounts of data. With a capacity of 500GB, you could easily find yourself transferring tens of gigabytes at a time to your external drive. 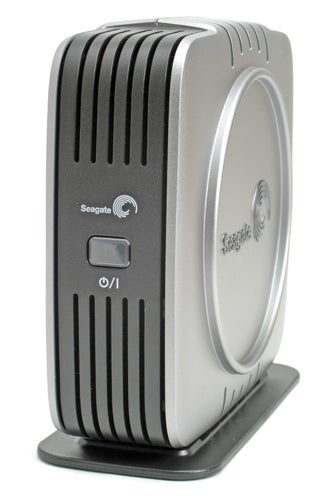 Interestingly, the eSATA drive was hot swappable using the Promise PCI card, but not using the riser attached to the motherboard SATA controller. That said, this probably means that the SATA controller on the motherboard didn’t support hot swapping, whereas a motherboard with integrated eSATA ports will. Either way, you get the controller card in the box, so it’s a bit of a non issue. It’s also good to see that Seagate hasn’t forgotten about Mac users – there are Mac drivers for the controller card also supplied on the CD.


Also in the box you’ll find a stand for mounting the drive on its side, a power brick, a power cable and the all important eSATA cable. I would like to see Seagate start to use an internal power supply and dump the power brick – even though that would make the unit on your desk slightly larger, I think that overall you’d end up with a more convenient solution.

The eSATA drive looks almost identical to the 400GB USB version that we reviewed before, although the new drive has a power button on the front rather than the one-touch backup button seen on the USB drive. This means that there’s no need for a power switch at the rear – in fact the rear houses only the power socket and the eSATA port. And therein lies my main gripe with this drive, a lack of connectivity options. 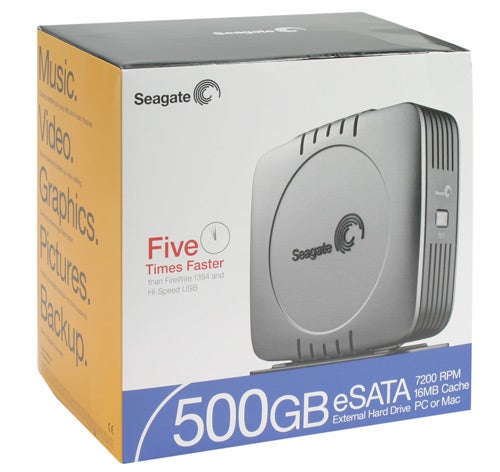 Despite the fact that it’s truly great having an external drive that functions as fast as an internal unit, the eSATA drive is somewhat limited when it comes to flexibility. It’s commendable that Seagate has included a controller card in the box, but ultimately that only lets you connect the drive to a single PC, and despite the increasing number of motherboards shipping with eSATA connectors, there are few PCs out there that support the standard yet. And the chances of finding a notebook with an eSATA port are slim to none, which means moving data from your desktop machine to your notebook is definitely off the menu.


Of course the issue of limited eSATA support is in no way Seagate’s fault, and the company should be very proud of the fact that it is pioneering a new standard ahead of much of the competition. But what I would liked to have seen was USB or FireWire support as well as eSATA, thus giving you the best of both worlds. That way you could have the lightning fast performance when connected via eSATA, but still have the option of connecting the drive to pretty much any computer, albeit at a slower data rate. 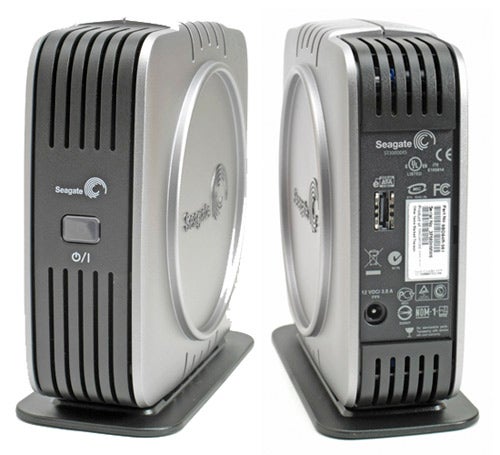 When it comes to cost, you’re obviously paying a premium over a standard USB/FireWire drive – the eSATA 500GB drive will set you back about £196 compared to about £177 for a 500GB USB/FireWire device. Of course you have to factor the cost of the eSATA controller card into that equation, which means you’re getting something tangible for the extra cash, rather than just extra performance.


Not since I used to build SCSI based PCs have I had an external drive that’s as fast as an internal disk. Seagate should definitely be commended for offering such a device and living at the cutting edge of the storage market. However, I can’t help but think that Seagate has missed a trick by not providing USB and FireWire support on this drive as well as eSATA. If this external disk offered that level of connection flexibility it would be walking away with a Recommended award, but as it stands it’s a good product that so easily could have been even better.