With USB flash storage devices ever increasing in size and dropping in price, it’s a brave move by Seagate to bring out its ST650211USB. All right, so the model number doesn’t really tell you much about the product, but the packaging says 5.0GB USB 2.0 Pocket Hard Drive, leaving you in no doubt as to what you’re getting. Now, this may not be a revolutionary product, in fact we looked at the MSI Mega Cache 15 pocket hard drive a while back, but having 5GB of storage in your pocket can’t be a bad thing. 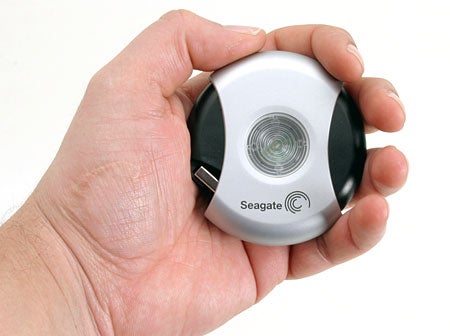 Unlike the majority of pocket hard drives that you’re likely to come across, the Seagate Pocket Hard Drive is round. This is an unusual shape for a device of this type, since the physical drive inside the casing is still square. That said, the Pocket Hard Drive fits very comfortably in the palm of your hand, and the round, almost organic shape is also more aesthetically pleasing than an angular square box.


The casing is constructed from two separate parts, one silver and one black. The silver part has two rubber feet to give it stability when it’s sitting on your desk or PC. Meanwhile, the contrasting black part of the casing rotates around to reveal the integrated USB connector, complete with a 13cm USB cable. Having the cable built in means that you won’t have any problems using the pocket hard drive with any PC, no matter were the USB ports are located. 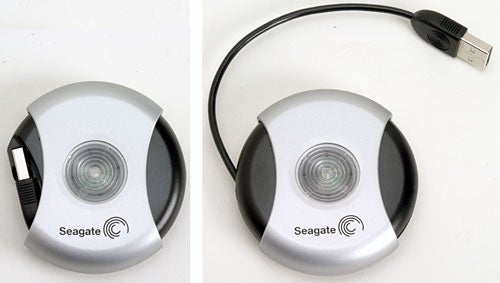 The integrated cable does make using and carrying the drive a more simple procedure. However, 13cm is still pretty short and I would have liked to have seen a longer cable, so that the drive could sit happily and safely on your desk, while the cable is routed up to a free USB port on your PC. That said, adding cable length would also have added size to the device, so maybe Seagate made a judgement call and compromised on cable length rather than physical size.


As with almost every technology device on the market, the Pocket Hard Drive has fallen foul of the “blue LED disease” – the whole centre of the drive lights up in blue when it’s is being accessed. Whether you’re a fan of blue lights or not is neither here nor there, but one thing’s for sure, blue lights are taking over the world! 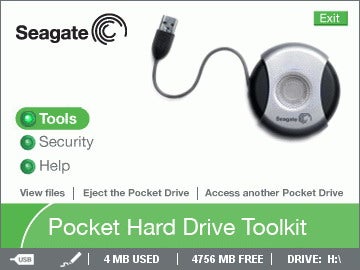 But what sets the Seagate drive apart from the competition is the excellent, easy to use software that is supplied with it. The Seagate Pocket Hard Drive toolkit is very intuitive to use and clearly displays how much free space is left on the disk. It allows you to make the pocket drive bootable and you can also repartition the disk here, although any data resident at the time would, of course be lost.

It is possible to password protect the drive to keep sensitive data safe from prying eyes, but you have to create a secure partition first. There is also a write protection option, so you can make sure you don’t delete important files by mistake. The help section contains a link to the PDF manual that resides on the disk, a web link for software updates and a web link to Seagate’s support website. 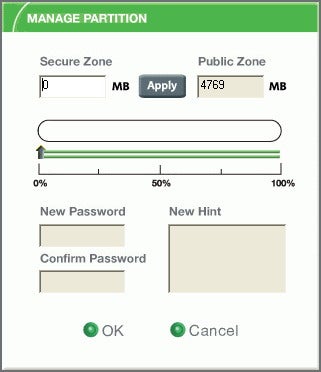 
When it comes to price the Pocket Hard Drive really starts to look attractive compared to its flash based competition. With a street price of only £94.05, it’s a real bargain – in fact you’d probably only be getting 2GB of storage from a flash based device at this price. Of course you could go for an external 2.5in hard disk and get masses of storage space, but it wouldn’t be as pocketable, and would be far more power hungry when being used with a notebook. 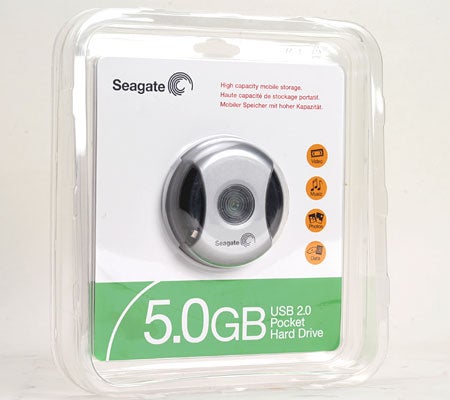 Ultimately it comes down to what’s most important to you. If you don’t need a huge amount of storage in your pocket and you want something small, light and bullet proof; a flash based device is probably for you. However, if your pocket storage needs a larger, and you don’t mind having something slightly more bulky with you, the Seagate Pocket Hard Drive definitely delivers a pretty good bang for the buck.


The Seagate 5.0GB USB 2.0 Pocket Hard Drive is a great little device. It may not be as small as some USB flash drives, but it’s very capacious and represents great value for money.