Anyone who’s tried to set up a home cinema projection system themselves will know all too well that one of the biggest hurdles can be keeping your surround sound system working to its best advantage.


After all, if you have a massive projection screen eating up much or maybe even your entire wall, where are you going to put your centre speaker so that dialogue still sounds like it’s coming from the screen? In fact, if your screen really is a whopper you might find yourself also struggling to fit your main left and right speakers around it.


The obvious solution to this is to put your speaker(s) behind the screen. But this presents its own problems. For clearly if you have a big slice of projection screen between the speakers and your ears, it’s going to disrupt the sound you hear. 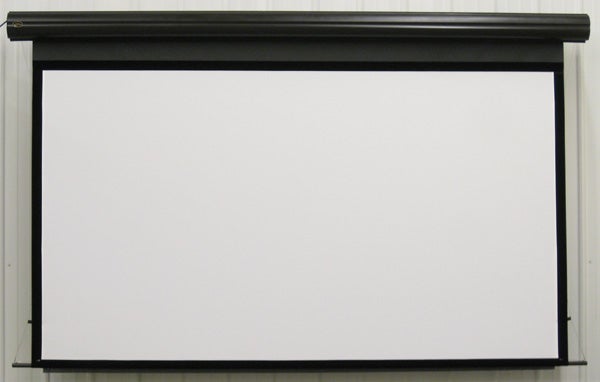 Cue acoustically transparent screens. These use a perforated fabric, so that sound can pass through the screen from speakers behind it without losing too much volume or clarity. Great. Until you realise that perforated screens also tend to mess up your picture quality by introducing moire noise; display distractingly visible evidence of the perforations’ and drastically reduce brightness levels, as the perforations let too much light through the screen, rather than bouncing it all back towards you.


These sorts of issues are especially common at the affordable end of the acoustically transparent screen market. So it was with a fair degree of cynicism that we took receipt of the Screen Excellence RM2-T: a drop-down motorised projector screen using a proprietary acoustically transparent ‘EN4K’ (Enlighter 4k) fabric that’s allegedly capable of only reducing audio by 2dB while also delivering a flawless, 4k2k-compatible image. All from just £1788 (if you go for an 80in fixed frame version). With effective – and quite a few less than effective! – acoustic screens generally costing many times more than that, surely the EN4K fabric can’t really be all it’s cracked up to be?


In the motorised RM2-T configuration used for our test, getting hold of the EN4K fabric predictably becomes rather more expensive than going for the fixed screen option. You’ll be looking at around £4,890.96 for a 100in version. But this is still by no means expensive for a motorised screen making the sort of claims Screen Excellence makes for the EN4K.

Before we find out if the EN4K fabric really is the answer to every cash- and space-strapped home cinema fan’s dreams, though, we’ve got a niggle to report about the cabinet for the RM2-T package. For during our tests we quickly became aware of a slender line of light running along pretty much the whole length of the cabinet that stores the motors (and screen when you’re not using it). 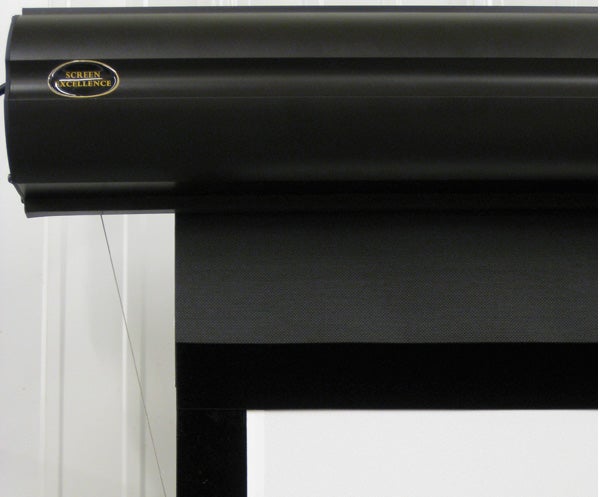 Thankfully, this distracting intrusion on our viewing was easily solved by just blu-taking a strip of black felt along the cabinet over the offending reflection. We’re all about high-tech solutions, us… Plus, we guess the problem might not occur if your particular screen design gives you more blacked-out space between the top of the screen and the motor housing than our test configuration did. But still, it’s something we couldn’t help but feel a company as apparently as obsessed with AV quality as Screen Excellence should have spotted. 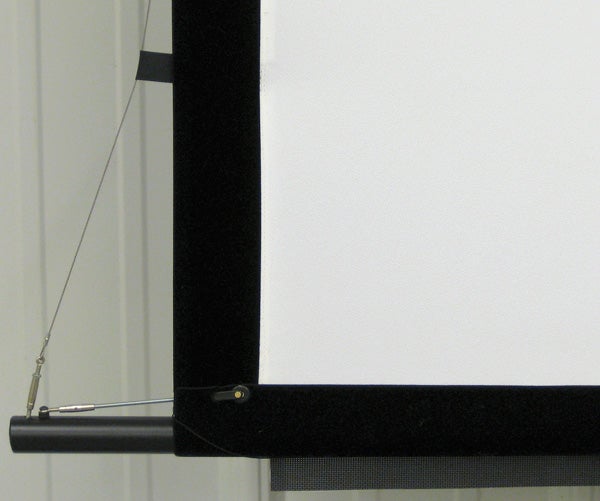 Thankfully, this niggle does not prove indicative of general sloppiness on Screen Excellence’s part. In fact, in all other ways the RM2-T, or more specifically, the EN4K fabric it holds, proves to be almost unbelievably good considering the low costs involved.


Starting with the EN4K’s video capabilities, it’s apparent immediately that the fabric is exceptionally smooth and ‘pattern-free’ for an acoustically transparent screen. Even when we tried to be outrageously unfair on it, by just projecting onto it a full-screen expanse of a single mid-range colour, we had to practically have our noses pressed to the fabric before we could see even a hint of its weave or perforations. From normal viewing distances, therefore, the old acoustic issue of visible weave patterning just isn’t an issue at all. 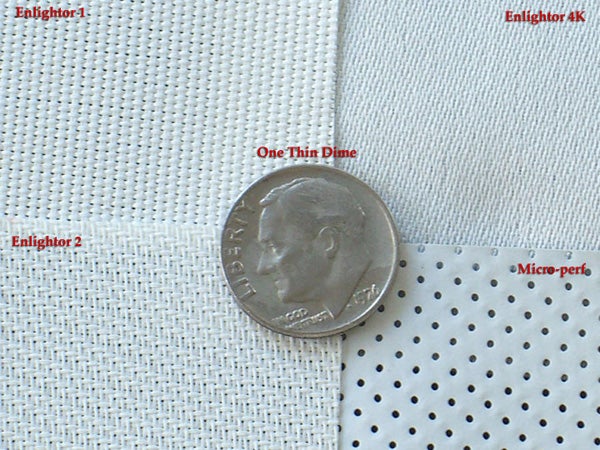 
The unusual density of the EN4K fabric that helps eliminate visible patterning also helps images in brightness terms, for the simple but key reason that the fabric doesn’t allow nearly as much light to pass through it as average acoustically transparent screens do.


So more of the light from the projector is actually bounced back off the screen to boost the vibrancy and punch of the final image you see.

Perhaps the single most important achievement of the EN4K fabric as far as we’re concerned, though, is the way it avoids moire noise. With numerous other acoustically transparent screens we’ve had occasion to spend time with over the years, including some quite expensive ones, we’ve noted the appearance of shimmering, wavy line noise, especially over areas of fine detail. This occurs when a screen fabric’s perforation step or weave size gets too close to the step size of the columns and rows in the source picture, so the EN4K’s total freedom from such nasty artefacts proves again just how phenomenally ‘solid’ and fine its weave pattern is. In fact, while we not surprisingly failed to find any 4k2k-resolution sources to try on the screen, from our experience with straight HD and simply looking at the fabric using a magnifying glass, we have no reason to doubt the veracity of Screen Excellence’s claim that the EN4K fabric is entirely suitable for the 4k2k world if and when it arrives.


While this is all great news for the EN4K’s picture quality, though, it does raise major concerns about the fabric’s acoustic properties. For surely a fabric as dense as this can’t really also let sound through, can it? 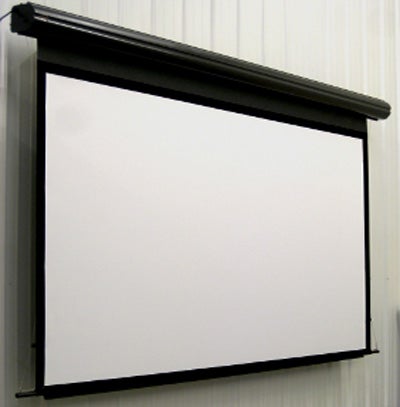 Actually, somehow it can. In fact, once we’d got used to the idea that a highly affordable acoustic fabric could produce a picture quality almost as satisfying as that of our much more expensive, non-acoustically transparent reference screen, the EN4K’s ability to let audio through became our single favourite thing about it. Only during extremely quiet scenes could our reasonably sensitive ears detect even the slightest hint of volume loss. And there didn’t seem to be any reduction in clarity at all.


So is there anything that we don’t completely love about Screen Excellence’s really rather inspired EN4K fabric? Well, if pushed hard we might say that while the reduction in brightness caused by its acoustic perforations doesn’t trouble us much at all with 2D viewing, it does seem more noticeable when viewing active 3D sources. So effectively, it slightly exaggerates the inevitable brightness loss you get as soon as you don a pair of active 3D glasses. Or maybe it would be better to say that active shutter glasses exaggerate the slight brightness loss associated with the EN4K’s acoustic transparency!


However you describe the brightness reduction when watching 3D on the EN4K fabric, the only thing that really matters is that it is far too minor a flaw to be remotely considered a deal breaker. After all, this single niggle is completely and utterly overwhelmed by the quite remarkable amount the EN4k fabric gets right for what is, in the circumstances, amazingly little money.