Fans of classic brawlers really can't go wrong with Scott Pilgrim vs The World: The Game – Complete Edition. It's gorgeous, satisfying to play, and has a positively banging soundtrack from pop/rock band Anamanaguchi that stands the test of time wonderfully.

Scott Pilgrim vs The World: The Game is a charming beat-‘em-up inspired by genre classics such as Streets of Rage and Double Dragon – and now it’s arguably better than ever with the Complete Edition.

Having spawned films, comics, music and countless other pieces of media, Scott Pilgrim has firmly established itself as a cult franchise beloved by fans. Sadly, its gaming adaptation has been mired by a rather tumultuous history. First released in 2010 to a strong reception, it was delisted four years later and became impossible for new players to purchase.

Since then, we’ve been clamouring for some kind of re-release, as it slowly became a relic of the past. Now, Ubisoft has finally delivered the goods in the form of a Complete Edition across all modern platforms. While it seems to be largely unchanged from the original experience, simply having this beautiful brawler in my hands once again has put a beaming smile on my face as I smash through all of Ramona Flowers’ evil exes.

To both its benefit and detriment, Scott Pilgrim maintains its classic difficulty and character progression to ensure that purists remain satisfied, yet newcomers who aren’t willing to dedicate themselves to the grind might be turned off by its unforgiving repetition. I landed straight in the middle, willing to push myself and learn its mechanics, even if it meant tackling the same stages again and again. Once thing’s for sure, this is far more than a generic button-masher. 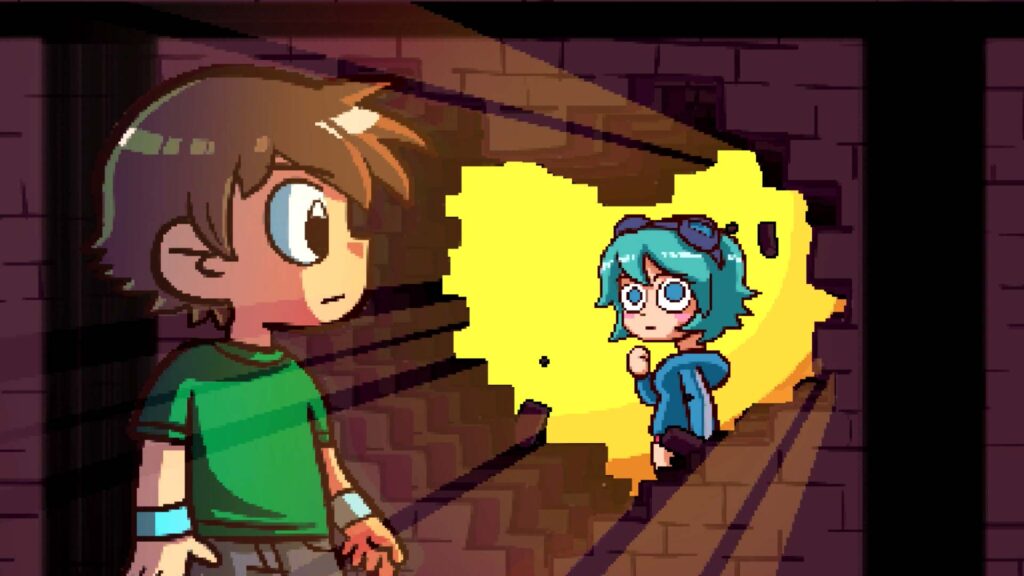 If you aren’t familiar with the concept of Scott Pilgrim vs The World, it’s surprisingly simple. The titular hero wishes to start dating Ramona Flowers, but to make things official he must embark on a journey to defeat all seven of her evil ex-partners. This takes him on an epic adventure inspired by classic films, video games and other pieces of media that are lovingly referenced across each level.

Upon choosing from a selection of characters such as Scott Pilgrim or Ramona Flowers, you jump into the first stage that takes place on the snowy roads of Toronto, Canada, en route to a concert. Unfortunately, an endless array of thugs and delinquents are keen to make your path to the gig more than a little tedious. I’m thrown straight into the action, and beyond a few brief tutorials, must fend for myself when it comes to learning the controls and determining exactly how each enemy variant ticks.

I’m quickly pummeled to pieces and lose one of my precious lives, yet manage to fare much better when I discover the block button. From here, it becomes easier to learn what combos can be used to break the guard of my foes and lock them into a devastating sequence of attacks. Scott Pilgrim doesn’t hesitate to overwhelm you with adversaries or stunlock you into a corner, so it’s vital to learn how to escape deadly situations as well as the moves that can best enemies in a few fell swoops. 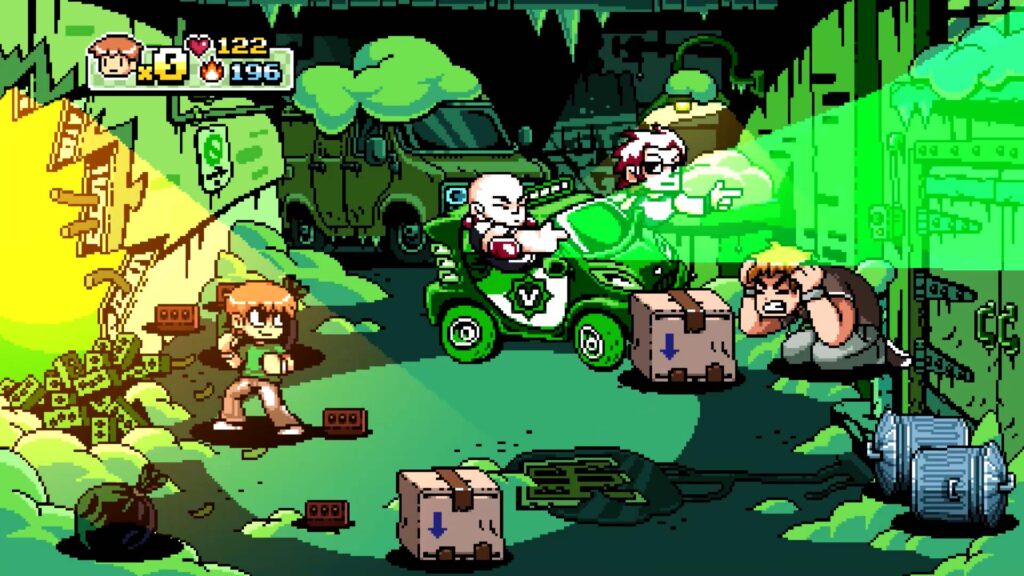 Each character has their own selection of moves and abilities that are earned by levelling up, acting as an incentive to replay stages for experience points. This is where Scott Pilgrim’s excessive grinding rears his ending, acting as an occasional frustration when you make it far in a level only to be beaten at the last hurdle, forced to replay it all over again.

I mained Ramona Flowers, who begins as a rather timid fighter who can spin her adorable bag around to smack multiple foes, or summon a giant cup of coffee to increase her movement and combat speed. After gaining a few levels, abilities such as a sliding kick and screen-spanning dodge become invaluable parts of my arsenal.

All of the other character operate in a similar way, growing in nuance with each passing level. Like the classic brawlers that inspired it, Scott Pilgrim is best played with a couple of friends by your side while marching through each stage. This would allow you to progress together, comparing movesets and combining them to wipe out baddies with ease. 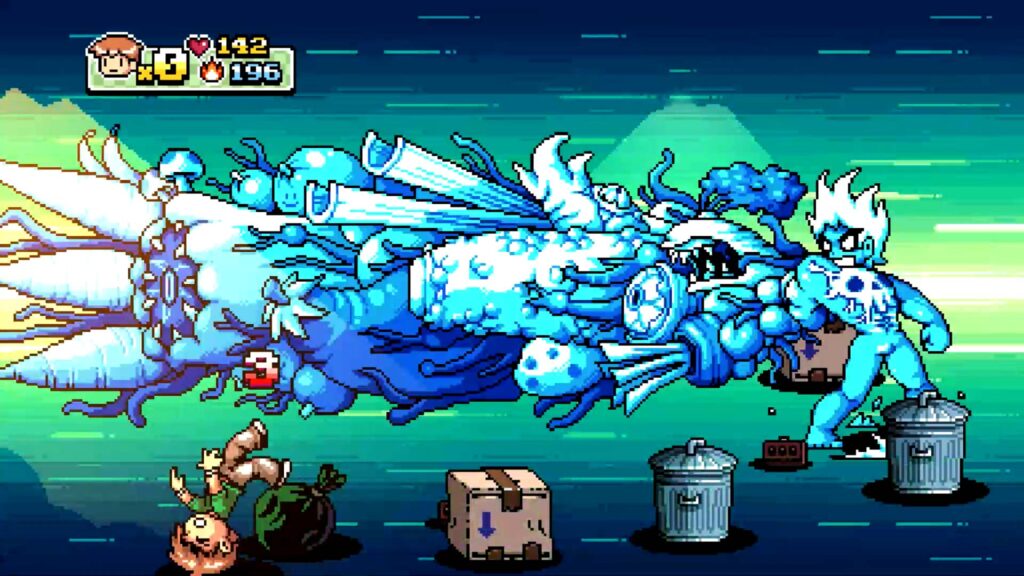 Boss battles are the highlight of each level, often acting as screen-filling behemoths that dominate the entire frame. You’ll need to move aside to dodge their attacks, often deploying random objects in the environment as projectiles to knock them off balance before diving in for a flurry of attacks. Showdowns such as this often feel built for multiple players, since on your lonesome it’s very easy to become overwhelmed.

Complete Edition comes with all downloadable content packs alongside additional modes such as Boss Rush, Survival Horror and Battle Royal. This feels like a comprehensive package, and beat-’em-up fans who don’t mind the flawed repetition will adore what’s on offer. With a few small caveats, I felt the same, with my nostalgia for the property pulling me through the rough spots.

Should you buy Scott Pilgrim vs The World: The Game – Complete Edition

Fans of classic brawlers really can’t go wrong with Scott Pilgrim vs The World: The Game – Complete Edition. It’s gorgeous, satisfying to play and has a positively banging soundtrack from rock/pop band Anamanaguchi that stands the test of time wonderfully. Some might bemoan its lack of visual or mechanical enhancements after 10 long years, but I feel the purity of this package is for the better in the end.