If you want to grow a beard in Score! Hero, it’ll cost you $5. That’s the modern reality of free-to-play video games: if you want to be bog standard, clean shaven and ordinary, you can play without parting with cash, but if you want to inject some personality into your play and unlock all the bells and whistles, you’re going to open up your wallet, virtual or otherwise.

To be fair to the latest version of Score!, that $5 can be (and readily is) earned through play and, indeed, from a purely structural level, the way the game’s swipe-based gameplay has been married with an energy system and in-app purchases actually works rather well. This is a sports simulation broken down into bite-sized nuggets of play, where you can beat Bayern Munich in 30 seconds or, if fate deems it it to be the case, lose by three or four goals to the German giants just as quickly.

It’s important to point out, in fact, that Score! Hero is played out almost entirely on rails. Every match of football you take part in, every single result, is already determined before the first whistle has even been blown, yet developer First Touch Games still manages to make you feel entirely invested in the action as you guide your player from reserve team obscurity up through the ranks to become a global superstar. 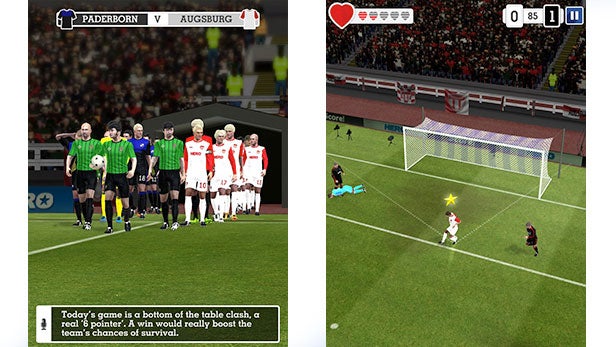 Doing so is just a matter of swiping. Like the original Score!, which charged you with recreating famous goals move by move, your sole input is to draw a line on the screen from the player in possession of the ball to where you’d like the ball to go. As soon as you’re done swiping, the game kicks into action, replicating your input with how the ball might travel in a real match. Successfully make a pass and the game will switch to the new man in possession, and you’ll then be charged with making your next move.

Unlike the original Score! release, there’s a certain amount of fluidity in just how these little snippets of action progress. It’s entirely possible – and often preferable for pure entertainment reasons – to pass the ball to any of the players within range rather than the most obvious one, and while Score! Hero has a script prepared for every eventuality, there’s a certain amount of satisfaction that blooms from making a successful play in an unexpected way, shooting and scoring from way, way out or, conversely, piecing together and intricate passing move when taking a shot appears to be the most straightforward course of action. 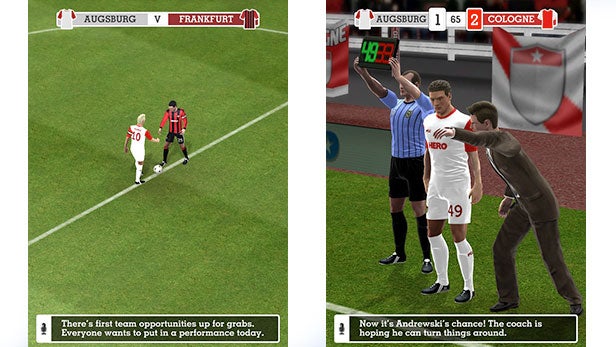 Things can, of course, go wrong, and when you make a pass that doesn’t come off, you’re presented with two options; you can either use one of your aforementioned dollars (amassed automatically from successful stages or from watching video ads) to rewind the last pass or shot you made, or you can simply let the game take you back to the start of the match, which itself drains some energy from your meter.

In early stages, it matters not just which you opt for. Dollars build up quite easily and the opening matches and most of the moves you’re charged with making are simple to pull off. The more difficult the game gets, however, with moves comprised of a whole host of different passes, the more likely you are to drain all your life just on one match. It’s here that players have to decide whether to part with some real cash or not, but for those who don’t, waiting 15 minutes or so for the energy to start to build back up again is no great challenge. 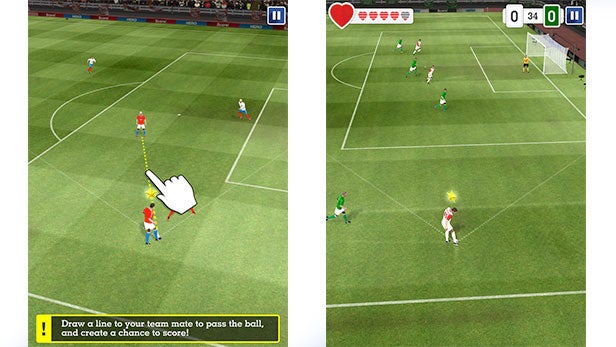 Perhaps more confusing for many players, however, is that the scripted nature of all of the games in Score! Hero means that there are many matches you simply won’t win. Tracking your career from one club to the next, Score! Hero manages to convey the highs and lows of your average football club (and your player’s role within it) with just a few headlines before each match and some intentionally succinct commentary as the players stride onto the pitch, all enabling it to paint a surprisingly detailed picture.

Piece all these elements together and you have a football game that, arguably more so than your FIFAs and your Pro Evos, gives a glimpse into the world of your average up and coming footballer, delivering a simple control method wrapped up in matches perfectly packaged for the mobile generation. Just get saving up those dollars if you want to grow a beard for your starring role on the pitch.

Verdict
Though play is kept to a series of simple swipes, Score! Hero manages to convey the peaks and troughs of a footballer’s entire career, from unglamorous beginnings to the very heights of the sport all via short and sharp matches made up of just a few moves within each game. Broken down into small slices of action, Score! Hero arguably offers a more authentic take on football than FIFA or Pro Evo.