What is the Schenker XMG U505?

Schenker’s XMG range is a well-known name in the gaming laptop market, and its latest machine arrives with a big dose of innovation on the inside. The XMG U505 is the first laptop we’ve seen with a proper desktop CPU.

This unusual design means the processor is totally upgradeable. However, this machine doesn’t come cheap – at £2,044, it’s the most expensive gaming laptop we’ve seen for years.

The U505’s lid, wrist-rest and screen bezel are built from a matte black, soft-touch material, making for a far more consistent-looking machine than the older XMG P304, which mixed up its colours and finishes with annoying inconsistency. A discreet logo on the lid, its sleek angles, and a futuristic font on the backlit keyboard contribute to an impressive overall look – like an Alienware, but without the divisive lighting. 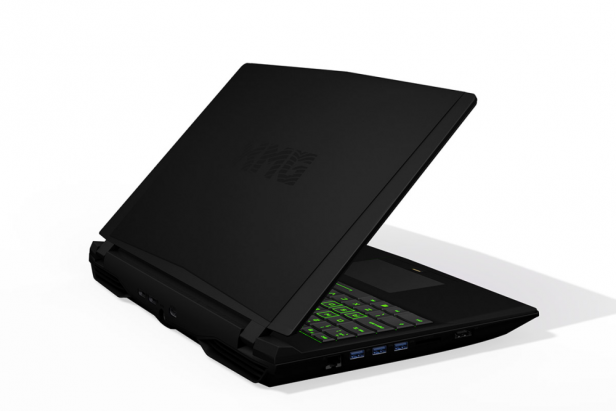 This machine’s versatility is also a key selling point, with the internals accessible through the removal of two base panels. The LGA 1150 socket that holds the desktop CPU sits beneath a large heatsink that takes little effort to ease away, and two memory sockets sit alongside, one of which is vacant. A further two are accessible, although they’re located underneath the motherboard.

One side of the laptop houses a spare M.2 connector that can be used for a second SSD, and there’s a 2.5in bay free too. The existing hard disk and M.2 drive are accessible, and the battery is removable. Only the soldered-down graphics core can’t be reached, which makes the U505 one of the most versatile gaming notebooks we’ve tested.

Build quality is surprisingly mixed. The base section doesn’t move when pushed or prodded, but the lid is thinner. There’s a slight creak when it’s flexed, which is a surprise in what appears to be a fairly robust-looking gaming machine. 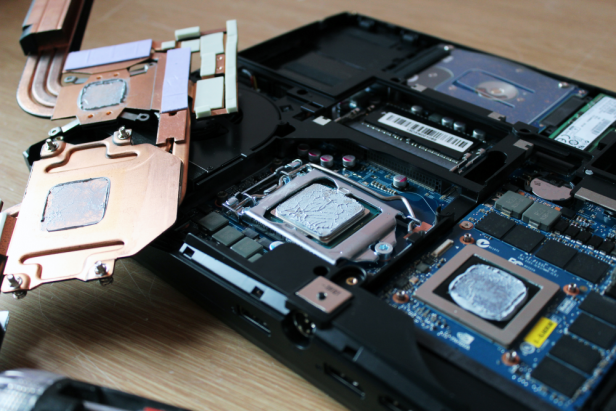 There’s a downside to all this versatility. The U505 weighs 3.4kg and is 36mm thick, which means it’s chunkier than more recent rivals. It’s more than a kilo heavier than the 22mm-thick Gigabyte P35X v3, and also larger than the sub-2kg MSI GS60 2PE Ghost Pro. It’s even a little heavier and thicker than the latest Alienware 15.

At least the chunky design leaves room for numerous ports. The left-hand edge has three USB 3.0 ports, a Gigabit Ethernet connector and an eSATA socket that doubles as another USB connection, plus there are four audio jacks and another USB 3.0 port on the right-hand edge. Two DisplayPort connections and a single HDMI port can be found on the back, which means this machine can support two external 4K displays.

The U505 comes with a 1,920 x 1,080 resolution display, although Schenker does make 2,880 x 1,620 and 4K panels available. The 1080p screen is our favourite for gaming and general work – it’s sharp enough to show off top titles, and it doesn’t come with the performance compromises or scaling issues that are common at larger resolutions.

Its measured brightness of 303 nits is below that of its rivals, but it’s still ample and, crucially, it’s bolstered by a superior black level of 0.21 nits. The latter is an important measurement: it means dark colours will be even inkier on this machine, which is a bonus when playing atmospheric games. The contrast ratio of 1,443:1 trumps the competition, and enables rich, distinctive colours across the whole scale. 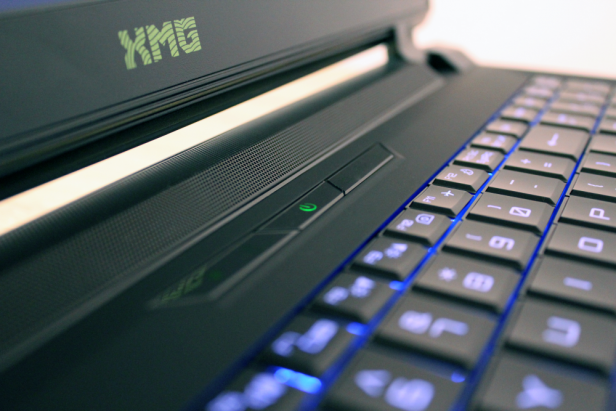 Those colours are more accurate than the MSI and Gigabyte systems. Its decent Delta E of 3.15 beats the Gigabyte, and its colour temperature of 6,841K is barely on the cool side, and closer to the 6,500K ideal than both of its key competitors.

The pair of SoundBlaster-powered speakers offer decent volume for gaming and music, and the quality is reasonable – bass drums are punchy enough to make up for a slight lack of clarity on deeper notes, and the top-end avoids being tinny. The mid-range is meaty, too. The XMG’s speakers match the Gigabyte for quality, but those of the MSI are a tad better.

The audio kit is enhanced by SoundBlaster’s software. By default, its crystalizer, surround-sound and bass-boost options are ticked, and all make the audio sound punchier – we certainly wouldn’t turn them off.