Forget the nightmare before Christmas – everybody with a family knows that the real terror takes place somewhere between Christmas lunch and New Years Eve. Once the presents have been opened, the roast has been consumed and the naps are over, extended families that might not always spend that much time together are suddenly stuck with plenty of time and a desire to spend it together, but not that much idea of what to do with it. If you want to avoid friction, it can help to oil those family wheels and find something everyone can join in with. In the past, we played parlour games or board games, and increasingly video games are taking a similar role. Anyone who had a Wii last Christmas will remember how Wii Sports could get everyone from the sulkiest kids to grandpa up and playing, but the likes of Guitar Hero, Singstar, the Eyetoy games and Sony’s Buzz range of quiz games were doing the same thing some time before. 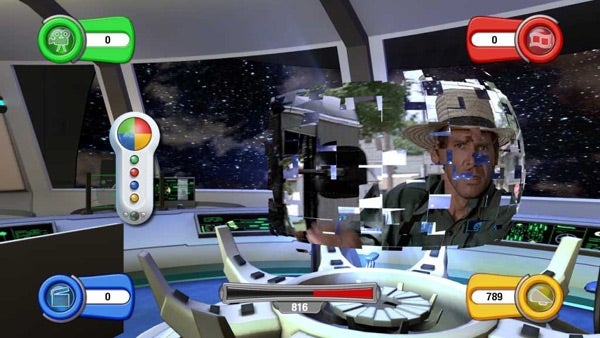 And now Microsoft wants a piece of the action, as it works to rebrand the Xbox 360 as more than the hardcore gamer’s console. Based on the best-selling range of DVD movie board games, Scene It? Lights, Camera, Action is a quiz game that comes bundled with a set of four special controllers. In fact, in true movie-making fashion, Scene It! plays homage to the PS2’s Buzz; the four ‘Big Button’ controllers follow the same four button plus big ‘buzzer’ layout as Buzz’s own controllers, though they actually look more stylish, feel more solid and are – best of all – wireless. AA batteries have been sensibly included – otherwise there would have been a lot of miserable punters on Christmas Day – and the controllers work with a special IR module that plugs into a spare USB socket on the 360. 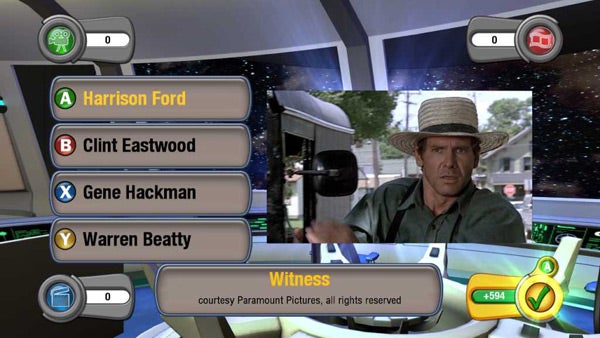 The game itself doesn’t stick so closely to Buzz’s virtual quiz show format. Instead, players are stars entering the Hollywood studio system, and the game is structured around a series of rounds played out in different studio facilities with the whole thing compared by an unseen producer. While not as stratospherically annoying as Buzz’s Aussie presenter, the producer’s irritating quips will still grate once the game has got a lot of play, but the saving grace is that his presence is fairly minimal. You can choose to play a short game (approx. 30 minutes) of three rounds of three sections each plus a fourth ‘final cut’ round, or to play a longer game where each round extends to five sections. 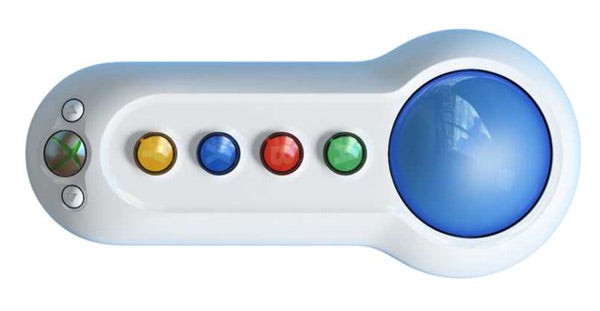 Each quiz section pretty much follows the classic multiple choice format: check the question, then press the coloured button corresponding to your answer. You’ll get points for getting answers right, and additional points for answering early. After the first round, however, you can also lose points for answering incorrectly. On top of this, a little update at the end of each round sees bonus points distributed for the fastest correct answer, answering three correct in a row or even answering incorrectly but slowly, amongst others. These awards are soon followed up by plaudits for the winners and jibes for the losers, and then it’s onto the next round of quiz sections. At the end, the points are all totted up and one lucky winner gets the red carpet treatment. Frankly, it’s a waste, as if they’re anything like me they’ll be too busy dancing around the room. 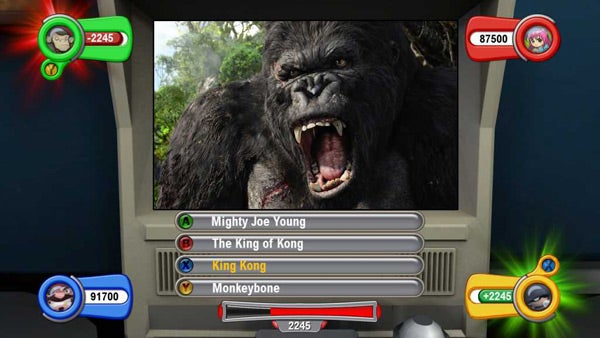 The presentation is slick in the cool but minimal style of a Guitar Hero or an Eyetoy game, and the nearest the game gets to eye-candy are the short animations that bridge the gaps between quiz sections and the gorgeous HD movie clips that turn up in rounds from time to time. I’m not really sure the movie-making framing structure works – the attempts to locate quiz sections within particular departments are pretty tangential at best – but at least the game doesn’t waste too much of your time with repetitive scenes or pointless links. The only thing that makes a game like this entertaining is what happens in the rounds themselves. 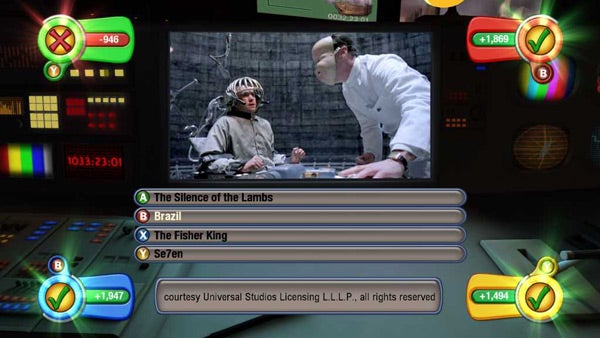 And the good news is that it’s all rather spiffing. For a start, there’s plenty of variety. Some rounds ask you to answer questions about a movie clip, but in others you might be trying to work out a title from a childish drawing or name an actor from an old high school photo. Others still demand that you arrange a series of linked movies in chronological order or work out a title from a series of baffling anagrams. In some sections the first player to buzz in gets to answer and everyone else is frozen out unless they get it wrong, but in most everyone gets a chance and the game reveals the right choice only when all players have made their selection. It’s fun and very inclusive, and the cinematic theme is a natural for the multimedia playback capabilities of your handy games machine. 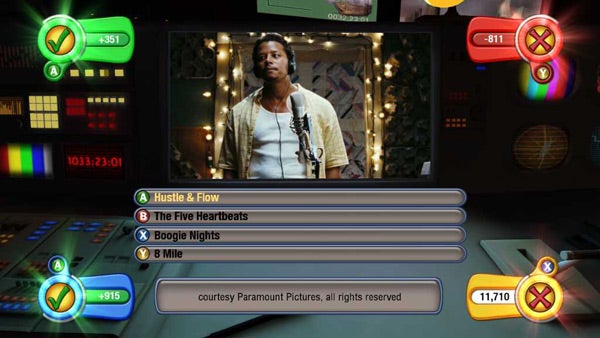 The questions themselves, meanwhile, are testing without being too obscure. If you rarely go to the cinema and never rent or buy a DVD you might struggle. Conversely, should you study film and have an encyclopaedic knowledge of classic Hollywood cinema, then you might have an unfair advantage. If however, you’re just the sort of guy or gal who picks up Empire or Total Film from time to time, then your strike rate should be neither too high nor too low.

The big downside – and one that’s not really a fault as such – is that if you have only one movie buff in the household and everyone else isn’t quite so knowledgeable, the continual losers will find that the novelty wears thin very quickly. Families with pre-teen children won’t find many questions that give the kids a fighting chance, and if you’re a film buff but your spouse or partner isn’t, playing Scene It? might not result in the most harmonious relations (see the note about victors dancing around the room above). Still, it’s hard to blame a film quiz game for the fact that it will be best enjoyed by movie-lovers. If you have got a house of film fanatics, the competition hots up and – predictably – so does the fun. Despite a slight bias towards films that any thirty/forty-something will know and love, the game covers enough periods and genres to give everyone a fairly even chance. 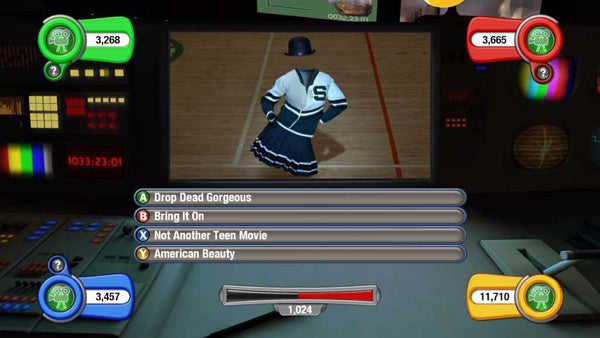 The only other possible objections concern that ever-prickly subject, fairness. For one thing, the fact that those who do well in each round are then rewarded with bonus points at each rounds’ end hardly gives the pack a chance to catch up. More seriously, there is a bigger issue with those rounds where you have to buzz in. Canny players will soon realise that buzzing in early gives them a good few seconds looking at the multiple choice answers while everyone else is locked out. This gives them a chance to muddle out an answer before they have to make up their mind. The various penalties for answering incorrectly work against this, but it is a real problem – especially in the anagram round. 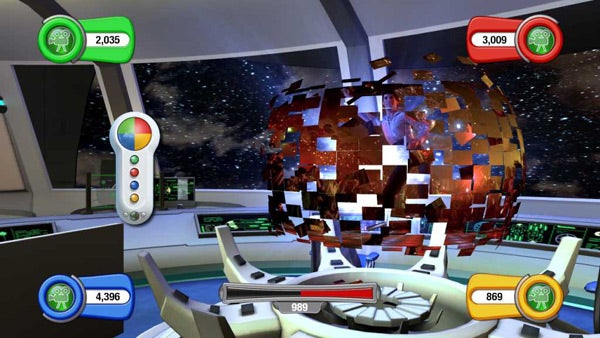 Otherwise, all you have to ask yourself is this: will my household or circle have enough people who will get something out of it to make Scene It? Lights, Camera, Action a worthy purchase? Like all quiz games it hasn’t got an endless lifespan, but with over 1800 questions and a mechanism that tracks which ones you’ve already seen, the lifespan shouldn’t end all that quickly. What’s more, Microsoft is promising downloadable content packs to come. 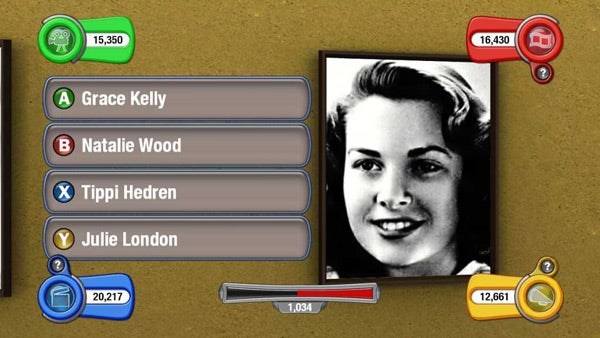 I reckon that if your motley crew of movie buffs get the game for Christmas, you might still be getting it out this time next year. Arguably a general knowledge quiz would have appealed to a wider range of people, but I’m marking Scent It? for the cinephiles it’s aimed at. Feel free to adjust the score according to your own family circumstances and connections, but provided you and your family like your moving pictures, this game will give them and you many hours of fun.


At the end of the day it’s just a movie quiz game – and one targeted squarely at movie buffs, not the occasional Cineplex visitor. All the same, it’s a well-designed and enjoyable one, and the Buzz-inspired controllers are an improvement on Sony’s originals.