When you need a bit of crazy tech it seems you should look to the Nordics. Already famed for Angry Birds, Adipose-look-a-likes and furry cashmere docks, this time it is the turn of Danish audio specialist Scandyna to remind us they can be bonkers too. The result is the Orko-esque ‘SmallPod Bluetooth’.

In fairness to Scandyna, the most bonkers part of the SmallPod Bluetooth has been here for some time. The company’s famed nautilus-style enclosures actually originated within Bowers & Wilkins, but was transferred to the Danes in the mid-90s where it has become their trademark. We’ll discuss the reasons for the shape later, but superficially it certainly makes the SmallPod Bluetooth stand out from the field and creates an instant love/hate first impression that will largely be influenced by your choice in decor. 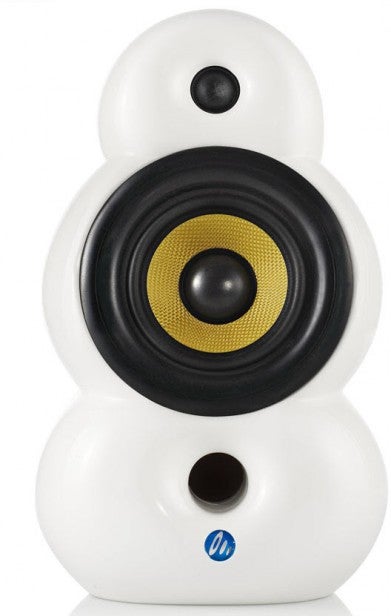 Red, white and black finishes are available and while the 256 x 160 x 157mm, 1.8Kg design may polarise, we are a little less enthusiastic about the build materials. The SmallPod Bluetooth enclosures are glossy plastic which further distinguishes them from the legion of traditional matt wood rectangular speakers out there, but it does mean they show up finger prints and dust. There is also a rather visible vertical join between the front and rear of the enclosures which diminishes the curved sweeping aesthetic and which we feel could be better disguised.

In addition we found the power cable at the rear is too easily dislodged (which frustratingly resets the speaker volume) and the bundled tripod legs for each speaker (which Scandyna recommends for optimal performance) don’t provide the best stability so be careful not to position them somewhere they will get bumped.

Ultimately this isn’t the most auspicious of starts, even if some will be sold on looks alone, but things take a sharp upward swing when we get to the good stuff: namely the audio. Despite its radical appearance the SmallPod Bluetooth’s nautilus design is very much about substance over style and replicated in Scandyna’s smaller ‘MicroPod‘ and larger ‘MiniPod’, ‘BigPod’ and ‘MegaPod’.

Original B&W creator John Bowers called the development of the nautilus design the search for the perfect dipoles and in short he found it reduced rear radiation and coloration while greatly improving response. What defines nautilus is the way the speaker tapers towards the back, acting to deaden the sound waves reverberating in that space. 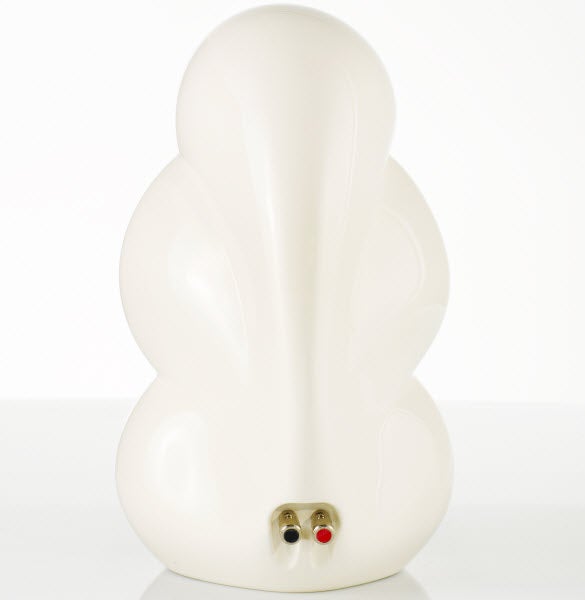 Backing up these potential acoustic benefits, each SmallPod Bluetooth speaker is active meaning it has the power amplifier built into the speaker cabinet, each of which also contain a 4in Kevlar woofer and 3/4in tweeter. Output power is an amply small room-filling 2x 40 watts RMS, while frequency response is rated at 20Hz – 20KHz, giving these speakers the specs to suggest a well rounded powerful sound. A reasonable >85dB signal noise ratio further hints at quality.

As the name spells out, the speakers also have integrated Bluetooth for wireless streaming. Bluetooth is a surprising choice for premium speakers compared to lossless standards like WiFi Direct and AirPlay, even more so when the high quality aptX Bluetooth codec is also omitted. 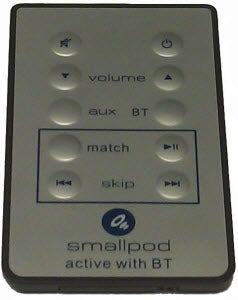 On the plus side the SmallPod Bluetooth does further show its mainstream pretensions by including a bundled remote (still far from a given with speakers). The plastic construction is a little cheap, but the ability to switch sources and pair Bluetooth devices is welcome in addition to the usual play/pause/skip and power commands.

So how does this unusual combination of radical style and substance turn out? On the whole the answer is very well, but with a few caveats. Most notable are the aforementioned effects of the nautilus enclosure. Sound is all about vibration, but how the nautilus design takes advantage of it results in a wonderfully clean, detailed delivery with an excellent balance between lows, mids and highs. 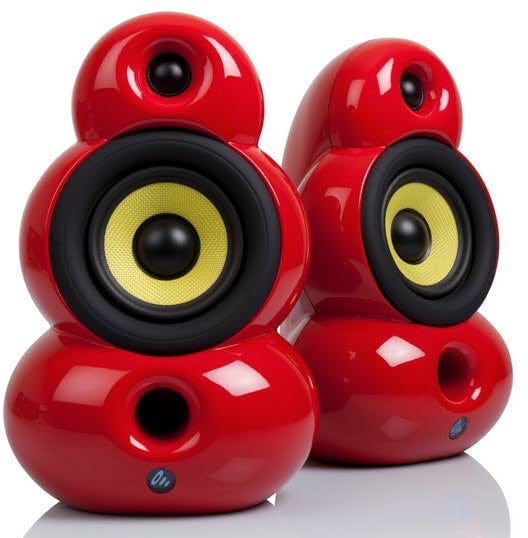 The sound signature is also commendably neutral, perhaps jarringly so for such an eccentric design but it does mean the speakers are flexible and adept over a wide range of musical genres. As a 2.0 setup bass at higher volumes – particularly in bass-heavy tracks – starts to tail off, but this is understandable and Scandyna offers ‘The Ball Mk2’ (a 60W Class D sub) for those looking for further grunt at lower frequencies. For mainstreams users, however, 2.0 will be enough – particularly in rooms of under 5m x 5m – to get away with both music and home cinema.

Where the caveats lie are not in the SmallPod as such, but in the Bluetooth. Quite simply Bluetooth is not the correct option for a premium speaker. We understand the convenience and compatibility it offers, but audio quality takes a nosedive that even the most casual listener will spot. AptX inclusion would have helped greatly, but Direct or AirPlay would have been more sensible – even with the backup of Bluetooth. 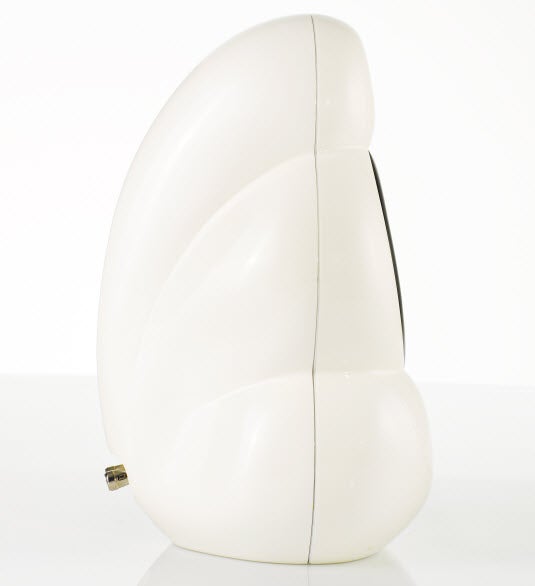 Given its style pretensions we aren’t surprised to see the SmallPod Bluetooth clock in at an eye watering £630 and should you want The Ball Mk2 sub it will add a further £499 onto the price tag. For the well heeled determined to make a design statement the good news is you will be getting speakers that are far more than just a (subjective) pretty face.

For others less enamoured by the curves, however, the picture changes dramatically. The obvious example is fellow Nordic audio aficionado Genelec as its smaller and far cheaper 6010A speakers can stand toe-to-toe with the SmallPod Bluetooth for under £400 while the larger pro-audio focused 8020B has them well beaten for under £600. Yes there’s no Bluetooth, but you don’t really want Bluetooth and the Audio Pro WP100 wireless transmitter or Apple AirPort Express would be a far smarter investment for your cable free listening pleasure. 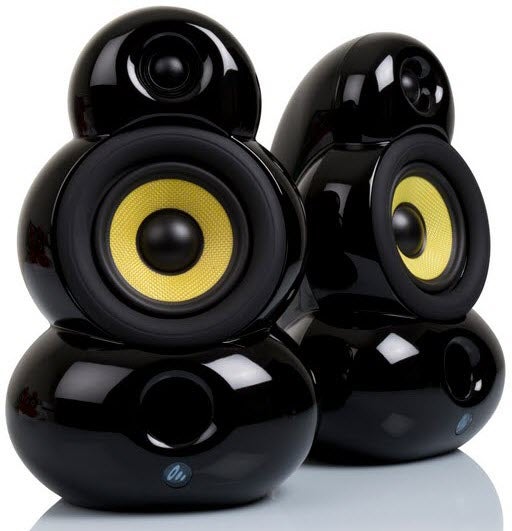 Designer technology doesn’t normally have its foundations in scientific research, but in the case of Scandyna’s SmallPod Bluetooth that is the happy history lesson. Consequently they sound as good as they look, and style fanatics will find them the perfect finishing touch to any room. On the flip side they come at a hefty premium and for those not fussed or actively turned off by their looks you can find better bang for your buck. Meanwhile only the most casual listeners will be happy to entertain wireless streaming over Bluetooth in this price range and we’d suggest circumventing it entirely in favour of quality lossless dongles.