Many home cinema speakers are designed to slip into your living room unnoticed but not Scandyna’s Micropod SE. This is a system that wears its designer heart on its sleeve, demanding your attention the moment you walk into the room. The system on test here is the 5.1 cinema pack, which comprises five stunning Micropod speakers and The Ball subwoofer. The satellites and sub are designed to complement each other aesthetically and sonically, boasting some of the sexiest curves since Marilyn Monroe. 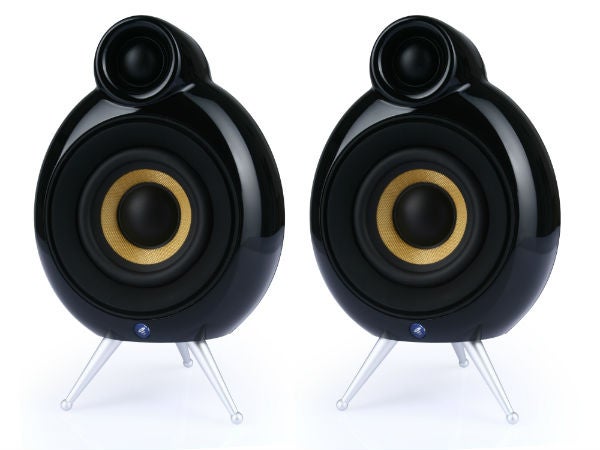 The design of the satellites is exquisite. It’s their rounded, pod-like shape that makes them so distinctive, giving them a devilishly funky feel. They are two-way speakers with a separate midrange driver and tweeter, but the latter is free-mounted in a separate housing on top, which gives it an alluring dual-circle shape. Words don’t really do it justice, you have to see and handle one up close to appreciate the genius of its design.

Each one stands 160mm high, but if you attach the supplied aluminium ‘sputnik’ spikes it increases to 195mm. The spikes act like a little tripod when attached, providing stable support and enhancing the overall look of each speaker, although it’s a little awkward shoving them into the holes on the bottom.

Build quality is exceptionally good too, feeling hefty in the hand and coated in a luxurious gloss-black finish. If you’re really daring you could check out the alternative white, red, yellow, blue or silver finishes. The binding posts on the back are sturdy and easy to access too. 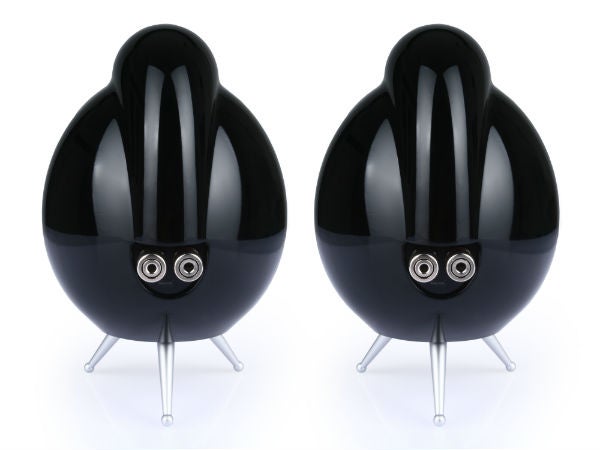 The eye candy continues with The Ball subwoofer, which shares the high-quality glossy finish (with the same choice of colours), robust build quality and compact design. As the name suggests, it’s (almost) spherical in shape and like the sats, it is perched on three silver spikes, standing 220mm tall when attached. A mesh on top reveals the woofer within, while a blue light on the front indicates when it’s switched on. The controls and inputs are located underneath, which makes them a tad tricky to access but has that covered with the supplied remote. 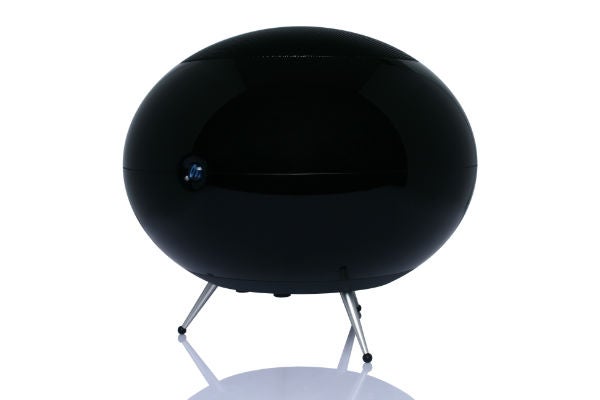 As mentioned, the satellites pack a separate midrange woofer and 19mm soft-dome tweeter into its closed box ABS design. The woofer is a 70mm long-throw driver featuring a Kevlar piston, with rubber surrounds around the yellow-coloured cone for fast transient response. These cover a frequency range of 65Hz to 20kHz, with sensitivity quoted as 86dB and they’re recommended for amplifiers offering between 20W to 100W. 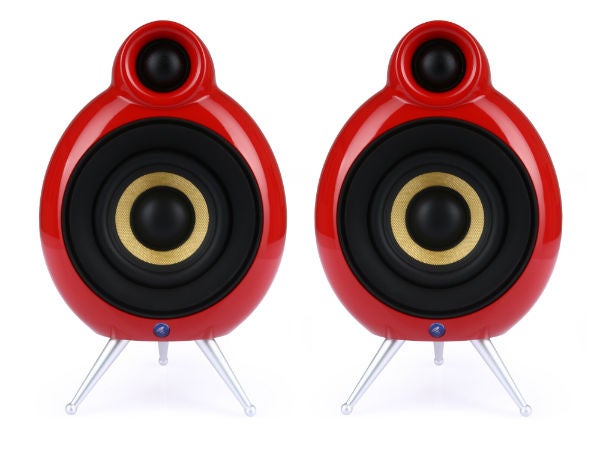 The Ball, meanwhile, has a solid spec for an ostensibly style-led sub. The onboard 60W Class D amplifier belts out the bass in conjunction with a 6.5in, four-layer woofer, capable of reproducing frequencies down to 40Hz (at -6dB). With short circuit, over current and over temperature protection on board it’s guarded against damage too. 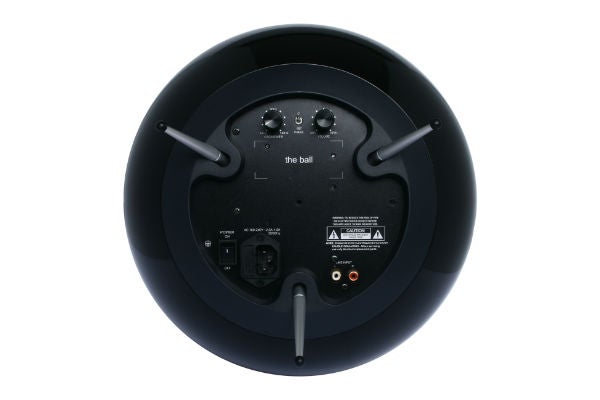 The controls are located on the sub’s underside and include a useful crossover control dial, which lets you set the point at which it takes over bass duties from the satellites to ensure a seamless, coherent sound. There’s also a volume dial, a switch to reverse polarity (phase) and a stereo cinch input. 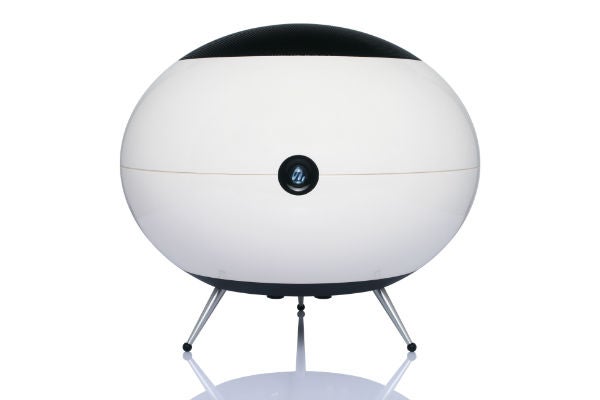 If you like to make regular adjustments to the bass level, you’ll drive yourself mad using the hard-to-reach volume dial, so thankfully the subwoofer comes with a credit-card sized remote. It’s as simple as remotes get, sporting volume, mute and standby blister keys, but it’s great that you don’t have to keep getting off your backside to make tweaks.

Finally, the satellites are supplied with wall brackets, which connect to the screw fixing on the underside – although we think they’re at their best when perched on the spikes. 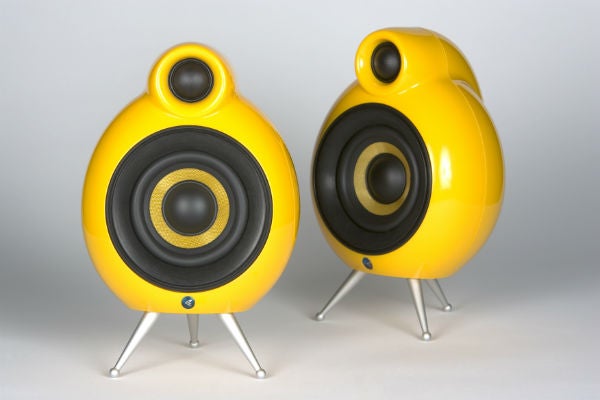 In action with our trusty Empire Strikes Back Blu-ray, the Micropod SE system proves that it’s more than just a pretty face. Like most speakers it needs running in to remove the slightly terse edge to the high frequencies, but once it’s settled in you’re treated to some impressive home cinema sonics.

It’s at its best tackling high-octane bits like the Tie Fighters chasing the Millennium Falcon through an asteroid field. The sounds of screaming spacecraft and loud explosions are nicely handled, relaying the effects with power while keeping harshness mostly suppressed.

Up loud there are one or two edgy effects, and the satellites are slightly shoutier than some of the other compact systems we’ve tested of late like the Tannoy TFX and the Acoustic Energy Neo Compact, but it didn’t greatly impact on our overall enjoyment. 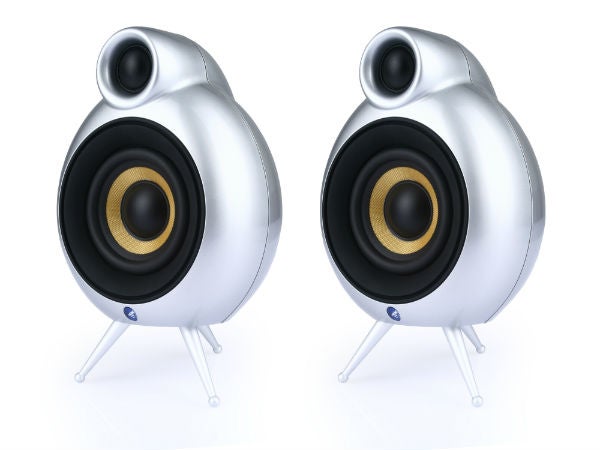 There’s lots of detail in the mix, which is particularly noticeable during scenes on Dagobah, where the distant creature calls, eerie ambience and robotic bleeps sound crystal clear. And the brass playing the Imperial March has a lovely crisp edge to it, backed up by rich, warm bass.

The soundstage feels fairly large in scale, we had no trouble in discerning dialogue due to the satellites’ naturally open and forceful character and all the while the subwoofer chugs along lending solid support where needed, without swamping the other speakers. 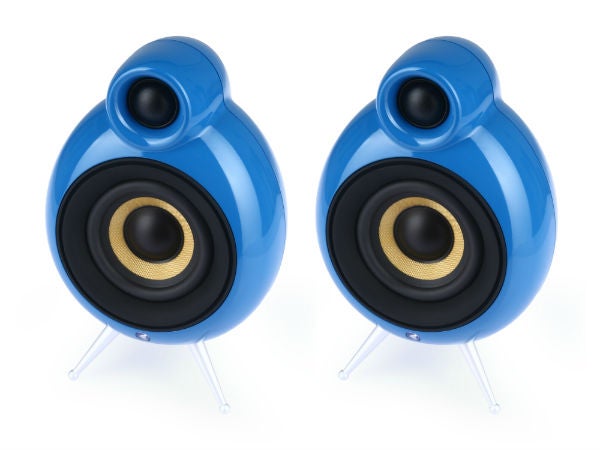 Verdict
Although it can’t quite match the levels of composure and smoothness of some rival compact speaker systems, this impressive-sounding system still has enough quality to back up those funky, stylish looks. It’s one of the most distinctive-looking systems on the market, plus build quality is top-notch and the accomplished subwoofer is also one of the best-looking models we’ve seen. It’s possibly a touch more expensive than it should be, but some AV fashionistas might just be tempted to max out the credit card for jaw-dropping looks like these.