About a year ago I met with Elan Raja – one of the Directors of Scan – and he told me that he had big plans for the system building arm of the company. Elan told me that he didn’t want to be building bog standard PCs – there were enough companies doing that, he wanted to create something different, something special, something desirable. Sitting in front of me right now is the fruit of Elan’s labour and I have to say that it certainly lives up to his vision. 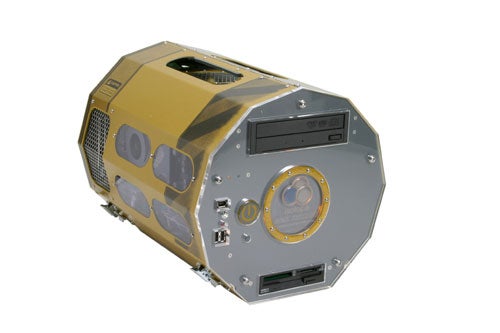 When I first unboxed the Isotope I was surprised by its futuristic, industrial look. Of course I’d seen pictures of it before, but to be honest they didn’t do it justice. Even the images that accompany this review, don’t really give you an idea of how cool this machine looks in real life. It didn’t take long before Sci-Fi geek Benny was in on the act and, unsurprisingly, he agreed with me when I said that it looked like a prop from Star Trek. You know that something looks good when two technology journalists spend ten minutes just examining it from multiple angles before even switching it on. Of course Jalal had to be contrary and say that he didn’t like it, but then he also refuses to use Firefox – need I say more?


Size wise, the Isotope sits somewhere between a small form factor box and a midi tower. The result is that it will sit comfortably on your desk without dwarfing it, but you have enough space inside to put pretty much any configuration you wish – except for SLi of course. The undecagon (that’s 11 sided) styling means that the base is flat, while the top is pointed. This made it easy for Scan to create a carrying handle for the top, but just make sure that you have the casing fastened properly before you pick it up. 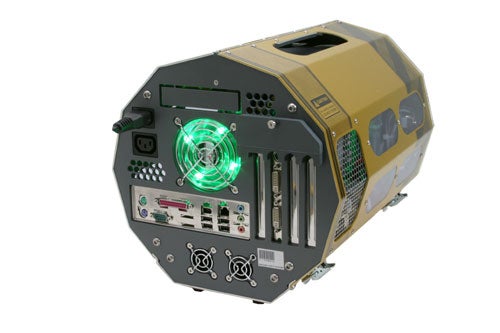 Of course the pointed top means that you can’t place anything on top of the machine, but since the opening for the handle is also a cooling vent, that’s not such a bad thing. Besides, when you’ve got a machine that looks this good, you shouldn’t be spoiling it by placing clutter on top of it.

The gold casing is awash with windows and grilles, allowing you to see the internals of the Isotope from almost any angle. When you have clear line of sight to the internals of a PC, you need to make sure that the build quality is top notch, and Scan has definitely made sure of that with the Isotope. All the cables are routed so that they don’t obscure airflow or vision, while the case is equipped with multiple coloured lights to show off the internals to best effect. 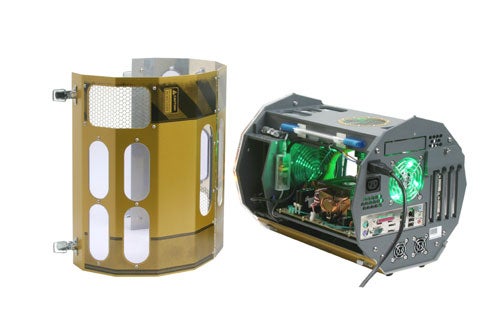 Talking of system internal layout, it comes as a surprise to find the PSU mounted at the front of the chassis rather than the rear. But what’s even more surprising is that there is a power pass-through on the rear of the case, so that you can power your monitor directly from the Isotope rather than pluging it into a wall socket. I seem to remember that there was a problem with CE approval when it came to power pass-throughs on power supplies, although in this case, the pass-through is not actually on the PSU, so the same issue probably doesn’t apply. Either way, the option is there if you want it, but you’re not obliged to connect your monitor this way if you don’t want to.


The front fascia of the Isotope is constructed from an 8mm thick slab of perspex that’s fixed to the casing using five large Allen bolts. There’s one 5.25in bay cut into the fascia which houses a black NEC ND-3540A DVD writer – pretty much the best DVD burner that you can get your paws on these days. At the bottom of the fascia is a 3.5in bay which has been filled with a floppy drive/memory card reader that will accept CompactFlash, MicroDrive, SD, MMC, SmartMedia and MemoryStick formats. There’s a gold Isotope badge bolted to the middle of the fascia, with a very large, gold power button to the left of it – once again both look great. 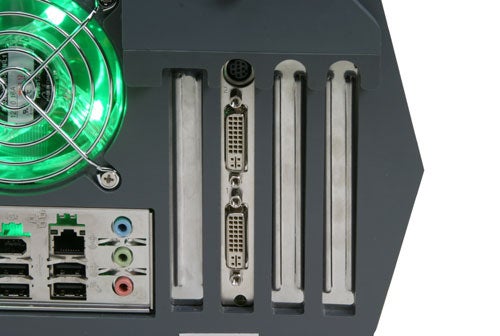 If there’s one problem with the fascia design, it’s the front mounted ports. To the left of the power button, there are fascia cut outs for a six-pin FireWire port, headphone and mic sockets, and two USB 2.0 ports. The issue is that the perspex is so thick, and the cut outs so tight to the ports, that you can’t actually fit some devices into them. For example, I could fit neither my SanDisk USB SD card or my Swissbit TwistPro USB memory key into the USB 2.0 ports at the front of the Isotope. Of course, the majority of USB devices do fit without issue, but you should really be able to use any device with these ports.

The case cover is secured by two clips at either side of the chassis. Once these clips are released, the cover can be lifted away from the main chassis – it’s probably the simplest internal access I’ve seen on a PC. Once inside, you can see that the motherboard is mounted on a raised platform, with the hard disk cage lurking underneath. The hard disk in the review system was a 250GB Maxtor unit with a 16MB buffer – so you shouldn’t see any kind of bottleneck here.


The motherboard is a Foxconn WinFast Socket 939 model with single x16 and x1 PCI Express slots, along with two PCI slots. All the slots are empty apart from the x16 PCI Express slot, but this is the important one – residing here is an XFX GeForce 7800GTX card. The 7800GTX represents the pinacle of 3D graphics at the moment and makes the Isotope a serious machine for serious gamers. 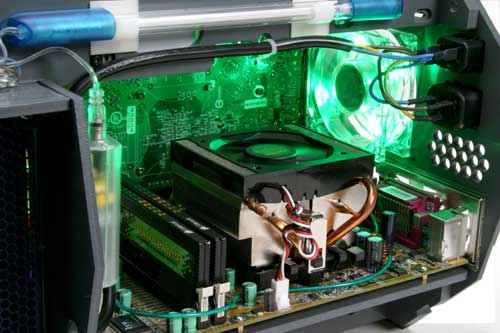 Of course a fast graphics card needs a fast CPU to drive it, but Scan is well aware of this and has populated the Socket 939 with an AMD Athlon 64 4000+. This may not be as fast as the high-end FX Athlon 64 chips, but it offers a great price/performance ratio, and won’t let you down in the gaming department. The memory won’t let the side down either – Scan has fitted a pair of 512MB Corsair XMS Pro modules, complete with LED load indicators. I usually see flashing LEDs on memory modules as a pointless gimmick, but when you’ve got a case with as many windows as the Isotope, these modules complement it perfectly.


Despite the high specification of the Isotope, it’s actually quite quiet in operation. OK, so it’s not as quiet as a passively cooled small form factor box, but it’s not going to drive you mad either. Of course the fans don’t spin up to full speed unless you’re really hammering the hardware, which usually means playing games, and when you’re playing games you’re going to have headphones or speakers on, so you’re not going to be bothered by system noise.

When it comes to performance, the Isotope has all the bases covered. As far as general Windows applications go, the SYSmark 2004 score of 186 shows that this baby can handle pretty much anything you’re likely to throw at it, but it’s the gaming performance that really matters. With the GeForce 7800GTX ticking along inside, the Isotope makes for a formidable gaming platform. Firing up Far Cry showed that frame rates didn’t drop below 60fps until you hit 1,600 x 1,200 with 4x FSAA enabled, and even then you still get 56fps. 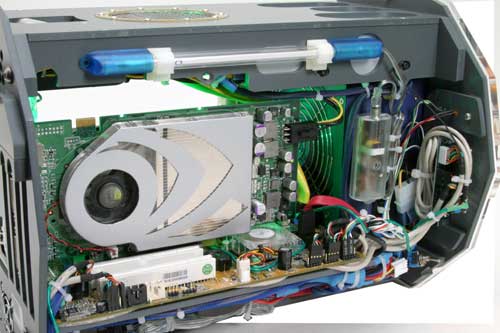 
Of course when you’re looking at a high-performance machine, that looks great, has solid build quality and top notch components, you expect the price to be high. However, at £1368.04 including VAT, the Isotope is priced far more reasonably than I thought it would be. OK, you don’t get a screen, speakers or even a keyboard and mouse, but even so, I’d be tempted to spend my cash on an Isotope – you may be able to buy a similarly specced PC for less, but it won’t look as cool as this.


Scan has created something very special with the Isotope. It looks fantastic, is built beautifully and performs superbly. Why buy another utilitarian box when you can buy a computer that wouldn’t look out of place on the bridge of the Enterprise.