There’s no question that Scan’s machine has the power to play modern games at 4K. With GTA V’s graphics options turned up and the resolution set to 3,840 x 2,160, the Scan still averaged 68fps. Then it ran through Middle-earth: Shadow of Mordor at 59.8fps. In DiRT Rally it averaged an impressive 63fps.

The Scan churned out three-figure frame rates in 1080p tests, and then scored 16,232 points in the demanding 3DMark: Fire Strike benchmark.

Not surprisingly, it means the Scan easily outpaced the CyberPower Fangbook 4 SK-X17, which could manage only 8,861 in Fire Strike. The Pascal-powered Scan also beat the Asus ROG GX700, which boasted an overclocked and water-cooled GTX 980 GPU and topped out at 12,941 in Fire Strike. 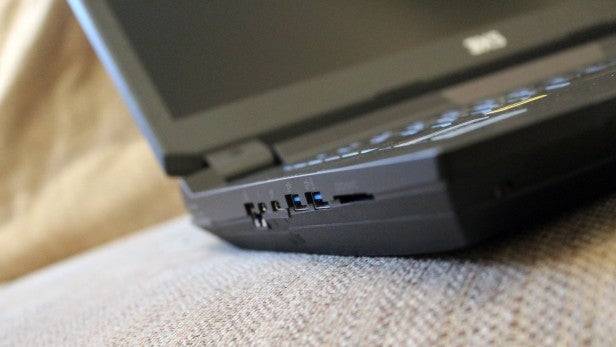 These are incredible scores, and activating Nvidia G-Sync didn’t have a noticeable impact on performance. In most of the test games there was no speed drop, with only a frame or two missing from a handful of titles.

The Scan’s incredible gaming grunt is bolstered by the desktop-class CPU. The Core i7-6700K managed 4,242 and 15,203 in Geekbench’s single- and multi-core tests – both better than the CyberPower. Those scores are up on the Asus GX700’s standard mode, with that machine able to surpass the Scan only once its overclocking was deployed.

I isn’t quite the standard bearer in application benchmarks, but this is still one of the fastest laptops I’ve reviewed – and it won’t get in the way of high-end games or intensive software. It’s quick when booting and loading: the Samsung SSD romped through sequential read and write tests at speeds of 2,098MB/sec and 1,534MB/sec.

Considering the high-end kit inside, I was concerned about noise and heat, but the Scan coped well. The processor topped out at 97°C in stress tests, which is only a few degrees short of its limits – but most users won’t run the chip at 100% load for extended periods.

The graphics card was cooler thanks to Pascal, with a peak temperature of 87°C. At that point it couldn’t make full use of GPU Boost, topping out at 1,683MHz. Those figures mean the Scan becomes hotter than the CyberPower, which has older and less-efficient hardware. 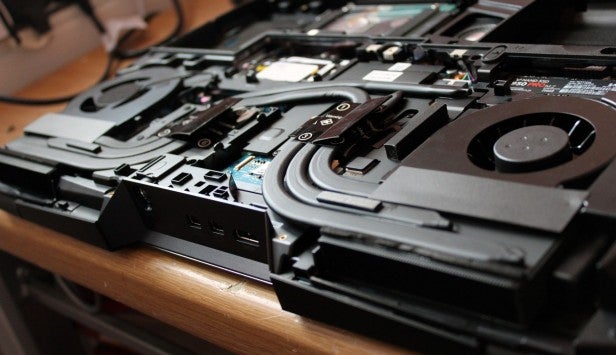 The Scan’s fans produced a deep and consistent hum during tough tests – louder than the Asus and its liquid-cooling, and about level with the CyberPower. Only a little heat made its way to the base panel or the keyboard, with hot air vented through the back of the system. Scan’s machine does a good job: no matter what benchmark I loaded, it never became too hot or too loud.

The 4K screen makes it necessary to deploy the Windows scaling options to make text and icons legible. My sample didn’t have any issues, and it’s clear this technology has come a long way.

The Scan’s initial brightness level of 354 nits is ample – better than the CyberPower, and not far behind the Asus – and that figure is paired with a 0.32-nit black point. This is close to both rivals, and it means the Scan delivers a contrast ratio of 1,106:1. As a result, games offer up plenty of punch across both deep and vibrant shades.

The Scan’s colour benchmarks were mixed. Its Delta E score of 4.46 is mediocre – poorer than both competitors – and its colour temperature of 7,134K is cool. Those figures were improved by a 100% sRGB gamut coverage figure, but both rivals have better Delta Es. 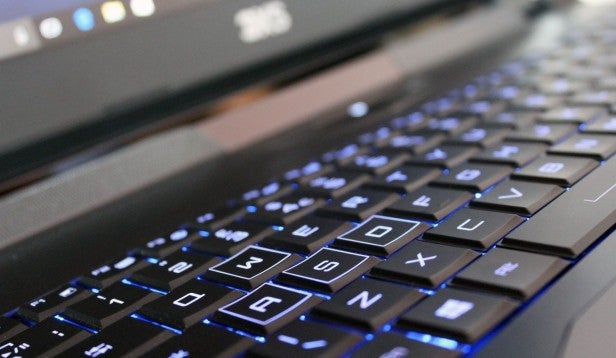 The Scan also improved when I turned down the brightness to 150 nits. After that simple change the colour temperature warmed to 6,876K and the Delta E averaged 1.28 – both excellent results. Contrast remained consistent, and the screen never lost more than 10% of its backlight strength in uniformity tests.

This laptop’s screen doesn’t falter in any department – and its 4K resolution makes everything pixel-perfect. That makes it one of the better panels I’ve seen on a gaming notebook, although its two competitors do offer similar levels of image quality.

The Scan has two speakers and a subwoofer, and the audio output is handled by SoundBlaster. At its default settings there’s plenty of bass, and that underpins a meaty mid-range with good detail. The top-end starts well, but the highest-pitched sounds present uncomfortable levels of distortion.

SoundBlaster’s app has modes for action, driving, FPS and RTS games, alongside options for movies and music. The latter is chosen by default, and the game-specified modes are a mixed bag. The action and driving options turn off the bass boost, which means the entire range lacks punch, while the FPS option turns on most of the effects for better balance and aural vibrancy.

The Movie mode is the best option, though. There was ample detail throughout the range and plenty of balance, with good volume, too – and this was the only mode that eliminated the high-end distortion. It’s a similar verdict to the CyberPower, which also featured SoundBlaster hardware.