Look – I’m not suggesting for a minute that there isn’t room for another motorcycle racing game to compete against Climax’s moderately successful MotoGP series. What I would say is that I’m not sure Black Bean Games has gone the right way about it. Somewhere out there there’s a space for a bike version of Gran Turismo or Forza, a biker GRID, even a bikes only take on Project Gotham Racing.


Anyone who has ever seen the Isle of Man TT in action will be aware that motorcycle racing is a sport with serious video game potential. But is there a huge audience waiting for a painstakingly accurate simulation of this one particular motorcycle racing championship? I’m sure there is, but I’m not sure it’s going to be all that big. 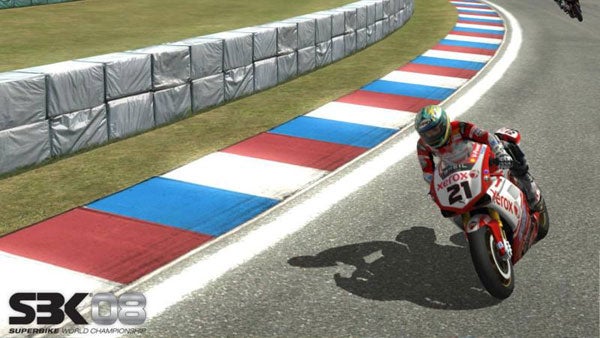 To be fair, SBK-08 makes some effort to be accessible. It has instant action and quick race modes, while the handling by default is a little more accessible than it is in MotoGP – you’re not being asked to handle the motion of bike and rider simultaneously straight off. Even so, with the realism settings dialled down and all of the driving aids switched on this still isn’t a game you can pick up and play in the way you can, say, a Forza 2 or GT5 Prologue. It takes time to get used to the less forgiving cornering of your bike, and the unnerving possibility that you might actually have to slow down to take tighter bends.


Of course it might help if the driving aids were as effective as they were in Forza, and if the tutorial was actually a tutorial and not a series of racing tests that prove you can’t play the game without informing you how you might get better. If you’ve never played MotoGP or any other bike racing game, you can expect the first one or two hours of play to be a mildly dispiriting experience that fits somewhere between watching your team lose and having someone you’ve asked out ignore your phone calls in the index of human misery. 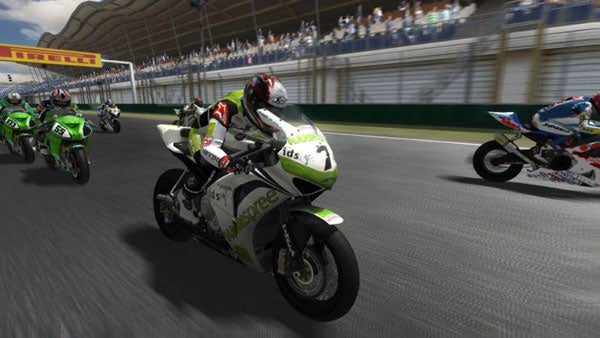 Still, you might get good at it eventually. If so, the heart of the single player mode is the 2008 Superbike World Championship, played out over a series of race weekends (which you can enjoy independently should you wish). If you’re a Superbike nut you’ll be delighted to find the whole experience replicated in some detail, with multiple qualifying, practice and warm up sessions to work your way through before competing in two actual races, and all the teams and riders of the official 2008 season. Those of us who aren’t Superbike nuts will find it all a little bit dull. After all, how many hours do you want to spend racing around the same track before you get sick and want to skip a session or two. Luckily, you can do exactly that.

In a way, System 3’s recent Ferrari Challenge: Trofeo Pirelli faced identical problems to SBK-08, in that it faced new players with an unforgiving difficulty curve and placed the emphasis on realism rather than instant gratification. Ferrari Challenge got past this because the racing was actually very good, the rewards were there in terms of new cars and new tracks to unlock, and because the feel and challenge of the driving became part of the pleasure of playing the game.


Sadly, this just doesn’t happen in SBK-08. It’s not the fault of the handling, which is perfectly decent, growing more satisfying once you start to switch the realism settings up. You learn to squeeze and hold the brake and throttle triggers gently then smoothly lean into the bend, and once you develop these more analogue racing skills, the flow of straights and corners gets a lot more enjoyable. The problem is that, where any motorsport game should be exciting, SBK-08 never quite kicks into high gear. 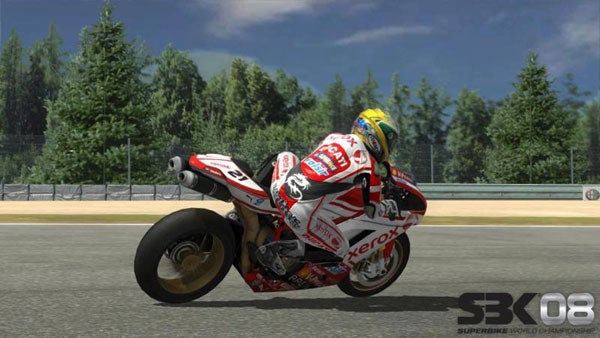 A lot of this comes down to atmosphere – or the lack of any such thing – and to the poor performance of the competitor AI. On lower settings I had my doubts that the AI code had even been plumbed in, so unresponsive and glued to the racing line were my rival riders.


Still, I hoped that notching it up for a quick race might make all the difference. All that happened was that the pack started taking corners slightly faster. There’s no reaction as you zoom to the back of a group of your fellow competitors, and no effort to block or evade you as you overtake. You’ll have countless upsets just because none of your opponents have the sense to shift out of you way when you gun toward their rear at 200 plus miles per hour. Surely part of the thrill of the sport is that human beings weren’t meant to travel at such speeds in such dangerous proximity. When nobody else on the track seems human, a lot of this feeling goes out of the window.


Like Ferrari Challenge, SBK-08 starts off feeling like a rather dry and technical racer. The unfortunate thing is that SBK-08 doesn’t become anything more. 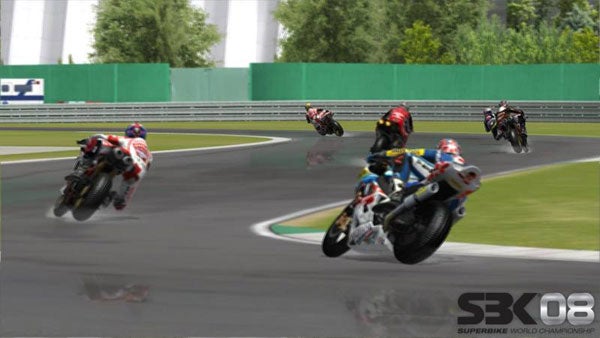 Nor do the visuals help. As you can see from the screenshots, SBK-08 does two things well, and those are the bike and the rider. MotoGP 07 did both slightly better, but it’s still hard to fault their modelling, texturing or animation – at least until you see the rider’s face up close.


Everything else, from the lighting to the background scenery, is horrifically flat and bland. We all know that real race courses are low on spectacular scenery, but even the grass textures, stands and trees look artificial. In fact, the last appear to have been rendered using the old two flat triangles in a cross technique that should have died out in the PS2 era.


Stands full of inanimate spectators should also have died a death by now, and while it seems like a good idea to show the ‘umbrella girls’ adding glamour to the start of the race, it’s not such a good idea when they look as graceful and lifelike as department store dummies. At times SBK-08 looks less like an Xbox 360 racing game, and more like an upscaled original Xbox effort. 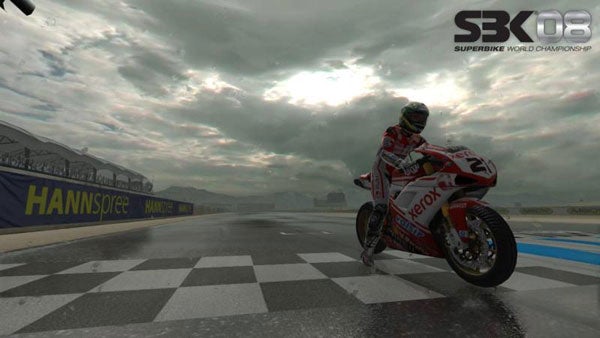 Even the online play is less than perfect. After a field of 22 in the single player game the track looks a little empty with just eight players participating, and while the unpredictability of human opponents gives the game some much needed energy, players are already thin on the ground. What games there are seem to be dominated by hardcore players with a yen for enforcing manual gear changes or higher realism levels. It’s not the most newbie friendly online racer. 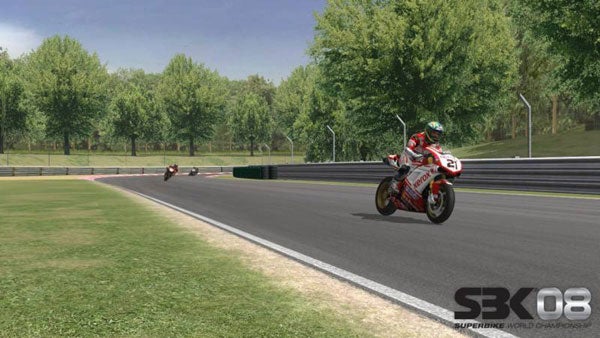 Now, fans of the Superbike championships with the time and dedication to master the handling may be willing to turn a blind eye to all this. If they do they can happily concentrate on the genuine strengths of the game: a solid handling model and all the courses, teams and riders of the real championship.


The rest of us will be left nonplussed, and wondering why Black Bean didn’t follow MotoGP’s lead and build in alternative game modes, like MotoGP’s excellent Extreme mode, to keep a wider audience happy. SBK-08 just about has what it takes to please the serious fans, but anyone just looking for a two-wheeled racer would still be better off with MotoGP 07. Anyone just looking for a decent racing game, meanwhile, should definitely look elsewhere.


With its low calibre visuals and poor AI, SBK-08 offers little to anyone outside of the hardcore Superbike audience. MotoGP remains the king of two-wheeled racers.