Back in 1993, Bullfrog made a ground-breaking cyberpunk tactical combat game called Syndicate. Its 1996 sequel, Syndicate Wars, was one of gaming’s lost Ur-genres, an even darker game about religion in a fully-destructible cityscape. Both were perfect recreations of grim cyberpunk worlds that you had to take over with your gang of cyborgs, by stealth, hacking or straightforward ultraviolence.

Satellite Reign (named punningly after Satellite Rain, the most indiscriminately-destructive of Syndicate Wars’ weapons) is a spiritual sequel to those games. You take control of a corporation seeking to muscle in another corp that’s dominating your city, using a group of four specialised cyborgs.

Despite the wealth of text in the game (or perhaps because of it), we’re somewhat hazy on what the actual storyline is. It appears that the Dracogenics corporation has taken over everything, using a technology that makes people functionally immortal, and you’re a rival corporation trying to break their monopoly – for your own dark purposes rather than human happiness, of course. 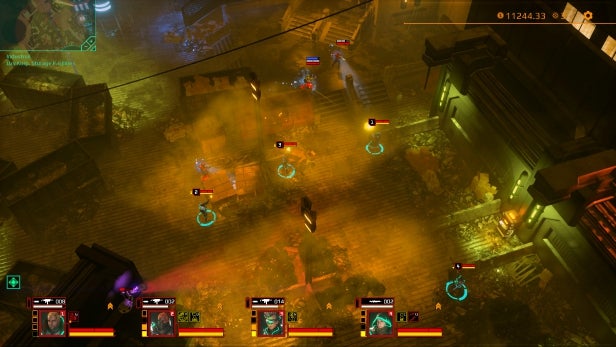 Given it’s setting, it’s no surprise how like Blade Runner the environments are. Flashing neon, dark metal, great billboards with women writhing on them – it’s the dark unborn future of the 1980s. Everywhere, there are people sitting on the ground, or wandering aimlessly – whether they’re tramps, stuck in some VR world, hopped up on Substance D, or just workers with nowhere to rest, it’s never clear. Shielded guards patrol past them, accompanied by aerial drones, ignored by all.

What’s wonderful is that, after a very short tutorial, you and your agents are just dumped into this huge open world. You can go anywhere along its maze of walkways, hide in its alleys, climb through a hundred vents, hack its cash machines and generally make a huge nuisance of yourself. Everywhere you go, you can establish fast-travel relay stations and as you do so, these reveal new nearby targets for you. Infiltrating (or storming) these buildings and compounds can give you cash, some upgrades, other just advance you in the story. In that sense, it’s a traditional RPG, closer to a real action version of the Shadowrun games.

At any one time you have a squad of four specialists. Oddly, they don’t have as much character as Syndicate Wars dehumanised everyman cyborgs – perhaps because of their focus on too-familiar character archetypes – soldier, infiltrator, hacker and support. Each one can be individually kitted out, with weapons, sidearms, silencers, and cyborg bits, but has a bespoke skill tree, meaning that they’re the only ones who can do certain things. The infiltrator can cloak, backstab and snipe, the support can scan the world for information or heal/buff the team, the hacker can hack anything in sight, and the soldier can tank gunfire and break mechanical objects. 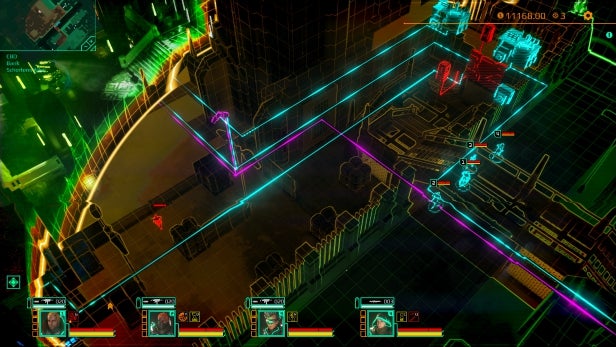 Especially at the game’s start, combat is unforgiving. Your squad are all reliable shots, so taking out one enemy is straightforward. But, as soon as you run into a few or, worst of all, wander through a camera’s line of sight, reinforcements start heading your way. Unless you can jam gates to prevent their entrance, you’ll gradually get overwhelmed in running battles or cowering behind cover. (When the AI is working that is – it was unreliable in the 1.0 version we were playing for review). And, though your agents can be revived easily, they might lose any special bonuses their source had.

Because, yes, in a dark twist, your hacker can kidnap people with unusual stats off the street and send them off to be the new hosts for your team’s ‘personalities’. This means that you don’t lose their levelling up when someone dies, but you do lose any bonuses that the host had.

So it pays to take care when assaulting a compound – walk around it first, watch the enemy’s patrol routes, find backdoors and ultimately pay money to information brokers or individuals roaming the world for tips. Then you disable any security cameras, hack the gate codes, avoid the guards (or take them down silently), and get into the base proper – then get out with your prototypes before the reinforcements arrive. Every mission has a story, especially when they screw up. 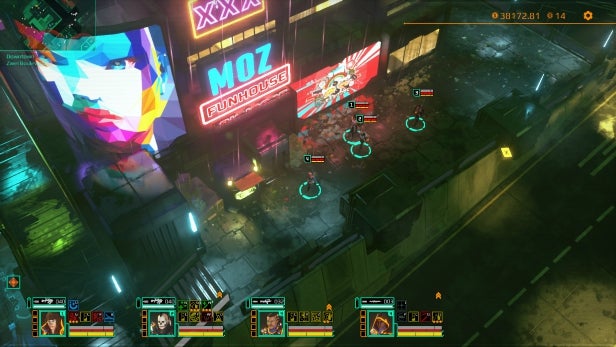 Once you’ve got a prototype, you have a choice. You can either use it immediately on one of your troops and risk losing it if they die – or send it off to be researched. Your corporation has a team of researchers that you’ve bribed off the streets who reverse-engineer any tech you find for your use. It’s terribly expensive though, so you’ll need a constant stream of cash (from hacked cash machines and bank jobs) to pay for it.

All of these elements combine to make busywork – you’re endlessly teleporting between relay stations, popping into one compound, picking up packages, and forgetting quite what is that you’re doing. It’s not that it’s not fun, but you definitely lose track of that story very quickly.

One element of the game that is simultaneously problematic and wonderful is your support agent’s data vision mode. This appears as a transparent sphere on the screen overwriting the world’s textures with power lines and network connections. It’s so useful because it not only highlights enemies on the map and finds key personnel amongst civilians. It also tracks the cables that link or power security cameras, gates, and turrets. 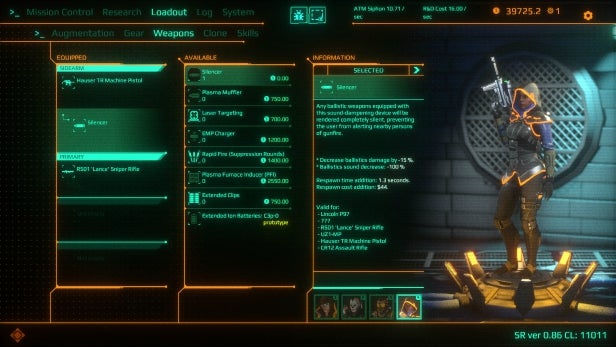 The developer has tried to force you to turn it off occasionally by making security camera vision cones only visible outside of it – but the view mode is so useful that even that advantage isn’t enough. This means you spend most of your time at maximum zoom without being able to see any of the handcrafted beauty of the world. That’s a real shame.

Another problematic element is that the game often feels like busywork. It’s hard to keep track of what the pings on the map mean when all the story is delivered buried amongst other lumps of text. And the combat, though hardcore, is often screwed-up by AI and cover bugs – and it’s pretty easy to run away from trouble, given the size of the city.

Verdict
These quibbles aside, Satellite Reign has infiltrated our hearts. It’s a handsome tribute to a much-loved game series that also functions as a unique RPG and a tactical combat game. As a revival, it takes its place alongside Shadowrun: Dragonfall and Pillars of Eternity with pride; as a tactical combat game, it runs a close second to XCOM.