Back in July we had a look at Sapphire’s liquid cooled X1900 XT-X TOXIC. That card used an innovative two part water cooling system to handle the substantial heat output. Compared to the X1900 XT-X reference cooler the TOXIC performed admirably, delivering low temperatures at manageable sound levels – the X1900 XT-X stock cooler being more hazardous to your hearing than the average AC/DC concert.


Now, a few months down the line, ATI has a new flagship GPU, the X1950 XT-X. So, accordingly, Sapphire has updated its TOXIC range to accommodate the new card. The result is the TOXIC X1950 XT-X. 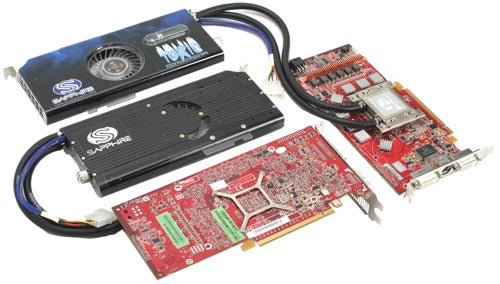 The packaging is almost identical to the previous TOXIC model with a large clear plastic box housing the card – this does very little better than a cardboard box would but it does look nice. The master card bundle includes DVI to VGA and DVI to component video adapters, a Molex to six-pin PCI-Express power adapter, and the CrossFire cable. The slave card bundle includes two DVI to VGA adapters, a six-pin PCI Express power adapter, composite and S-Video ViVo, and finally component and S-Video cables. Both versions include a “Getting Started” manual, driver disc, CyberLink PowerDVD, and a copy of The Da Vinci Code game. This is a little below par for a flagship card but wouldn’t completely put me off. 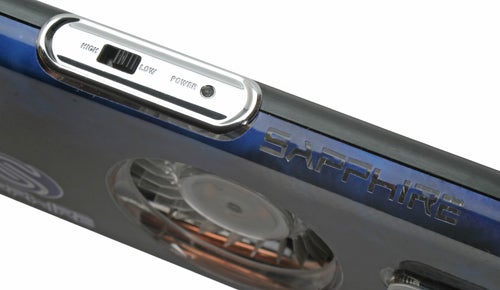 The cooler for the TOXIC is identical to the one found on the X1900 XT-X TOXIC, indeed Sapphire even neglected to update the sticker on our review sample and it still reads, “TOXIC Liquid Cooled X1900 XT-X”, but it’s definitely an X1950 inside. It is an all-in-one unit that contains the reservoir, pump, copper radiator and cooling fan in a package that fits in a spare expansion slot. On top of the cooler is a switch that can be used to set the fan speed to 2,000 or 2,500rpm. The actual graphics card just has a water block mounted on the core which is connected to the cooler by a pair of rubber hoses. The whole thing comes connected, pre-filled and ready to go out of the box.


Sapphire enlisted the help of cooling aficionados Thermaltake in designing this cooler and it is clearly based on its Tide Water line of coolers. These can be had for around £50, so the asking price of £370, being around £100 more expensive than a conventional card, seems rather expensive – although it’s worth remembering that if you do it yourself you’ll need to know what you’re doing and even then you’ll void your warranty on both cards. 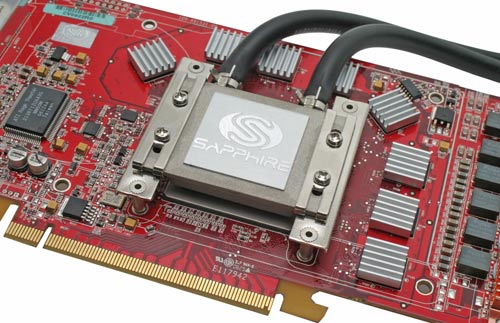 The graphical capabilities of the R580 core are covered in detail in our X1900 XT-X roundup but to recap; it has 48 pixel shader processors, 16 texture units, eight vertex shaders and 16 pixel output engines. Standard speeds for the X1950XT-X are 650MHz core clock and 1GHz (2GHz effective) memory clock. This particular card has a higher core clock than standard, coming in at 695MHz, though memory speeds stay as standard. This is a fairly decent improvement, considering the X1950XT-X isn’t known to be a huge overclocker, and will hopefully provide a noticeable boost in performance.


Where the X1900 version of the TOXIC really excelled was in reducing noise levels compared to reference cooled versions. However, when ATI revised its R580 core, from the X1900 to the X1950, it also redesigned the cooler and the new version is far quieter and more efficient. Indeed, comparing the TOXIC X1950 XT-X cooler to the reference cooler shows little distinguishable difference. This presents something of a problem for the TOXIC as one of its major selling points has been negated. It’s now down to raw performance to determine whether Sapphire’s TOXIC is worth the extra over it’s air cooled card.

When we reviewed our reference X1950 XT-X we didn’t have a CrossFire master card so were unable to test its CrossFire performance. This time, however, we received both a master and a slave card so we combined our testing to compare the X1950 XT-X in CrossFire against the current leader, the nVidia GeForce 8800 GTX. 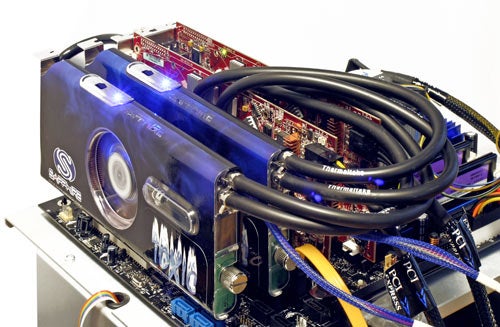 
The TOXICs outperformed the 8800 GTX by an average of 55 per cent in Call of Duty 2 and 18 per cent in Prey, which is much faster than I was expecting. Other results were more mixed but the TOXICs still held their own, even in Quake 4, which ATI cards have traditionally struggled with. What is particularly noticeable is how well CrossFire scaled, with the dual cards, in some cases showing close to 100 per cent improvement over a reference X1950 XT-X.


The X1950 XT-X is clearly a good performer and a pair of them leaves the 8800 GTX for dead. However, with Windows Vista just around the corner it is hard to recommend buying any card that doesn’t support DirectX 10. Ultimately though, it’s the 8800 GTS that makes life difficult for these TOXICs – with DX10 support, a price tag £70 lighter than the TOXIC, and a fairly quiet cooler to boot.