When the X800 originally launched, there was actually no vanilla version – just the X800 Pro. Based on the R420 this was a 12 pixel pipeline card built on a 0.13 micron process. The X800 however, is an R430 – a 12-pipeline card produced on a 0.11 micron process. While this enables clock speeds to be ramped up, the X800 is actually lower clocked, at 390MHz for the GPU and 350MHz (700MHz effective) for the memory. Instead consumers can enjoy the benefits of greater availability and lower prices and it’s still higher than the 325/700MHz specs of the regular GeForce 6800.


Essentially, the 16 pipelines on a R430 is set out in quads – if one of the four isn’t quite up to scratch it becomes a X800. Though it has ‘only’ 12 pixel pipelines it has a full six vertex shaders and of course, supports X800 features such as 3Dc. 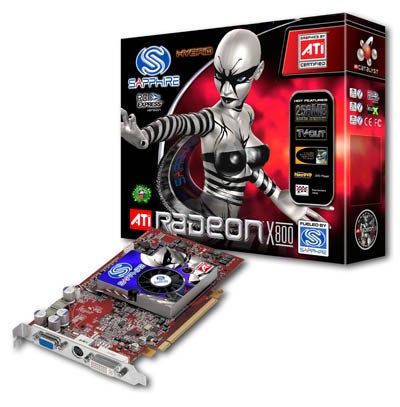 There’s 256MB of GDDR3 memory on board, which compares favourably to its nVidia equivalnt card, the standard GeForce 6800, most of which have only 128MB of memory


As is standard for cards in this class the X800 sports a VGA and a DVI connector, with a VGA dongle adaptor included in the box. There a TV Out with a cable providing either S-Video or composite out. The cost saving compared to more powerful cards means there’s no video in, so you can’t use it as a capture card. However, it’s lower power requirements means that it doesn’t require an external power connector. Indeed the VPU is also covered by a relatively modest looking heatsink and fan arrangement, which in turn means that noise levels won’t be too excessive.


The card is available in a full retail version which includes the full version of Price of Persia, Cyberlink’s PowerDVD and Red Line’s overclocking utility. There’s also an OEM ‘lite’ version without these extras.


Testing on our soon to be retired graphics tested of a 3.46GHz Pentium 4 Extreme Edition I were able to compare with our previously reviewed X800 XL and the X800 XT Platinum Edition, enabling you to see at a glance what your money gets you from ATI’s current X800 range.

Generally speaking the performance is in line with what you’d expect with a pleasingly linear increasing scale showing clearly what you get for your money. The exception in the graphs is in Doom 3 where the X800XL is outpaced at all resolutions when FSAA and AF are enabled. the xplanation for this is simple though. The XL was tested back in mid-December with an older driver (4.11 – so in fact it’s good news again as it demonstrates how hard ATI has been working to make up for nVidia’s lead in that title. If tested with the current driver (5.3) I’d expect the XL’s Doom 3 scores to increase bringing in back into line.


It’s also interesting to see how stressful Far Cry still is for graphics cards over a year since its release, with the title returning lower scores than Doom 3. 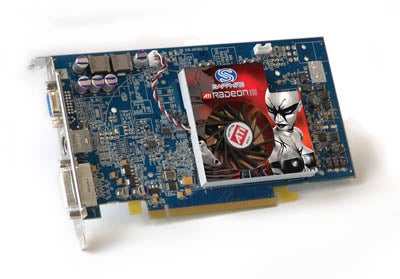 So what do you lose by saving money and going for a 12-pipe ATI card over a 16-pipeline card? What it does is essentially rule out 1,600 x 1,200 with FSAA and AF as a playable resolution –if you really want to crank it up you’ll going to have to plump for a more powerful card. What’s more, the 3.46GHz Extreme Edition Pentium 4 that these tests were conducted on is still a high-end proposition, so most people will be seeing lower scores. This might even put 1,280 x 1,024 with FSAA and AF out of reach, depending on the CPU.


If you only play games at 1,024 x 768 then the standard X800 is a great choice and going for a more expensive card can’t really be justified. But above this in newer games, the benefits of a 16-pipe card can be clearly seen. With a DirectX 8.1 title like Unreal Tournament 2004 the X800 acquitted itself well even at maximum settings, but for newer titles it hasn’t quite got the horsepower to compete. 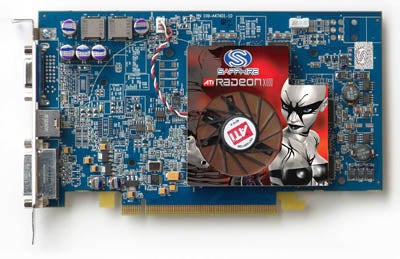 This means that the price to performance sweet spot for ATI is still the X800XL. As far as nVidia goes, seeing as the X800 offers 256MB compared to 128MB and that the GeForce 6800 standard lacks the SLI compatibility to muddy the waters, the X800 blows the standard GeForce 6800 out of the water.


If you can’t stretch the budget to a X800 XL the X800 is a good alternative and at £166 it’s not too far off the price of a single 6600GT. For those that don’t want the costs associated with going down nVidia’s SLI route it’s a sensible choice.