Today’s question is: what on earth could possibly be exciting about the Sapphire PI-AM2RS780G? On the face of it, not a lot, as this Micro-ATX design appears to offer very little. It looks considerably duller than the Abit AX78 that we reviewed a couple of weeks back. It supported the AM2+ socket with an AMD 770 + SB600 chipset combo and had a funky OTES passive cooling system, dual PCI Express slots, digital audio output and a great little flick switch to clear the CMOS – all useful and attractive features. 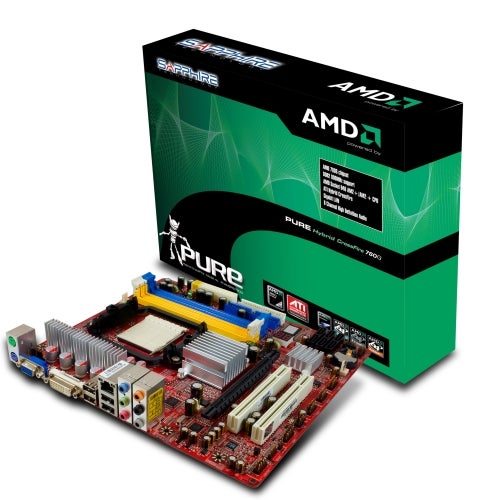 The Sapphire has none of those features, but what it does have is the new 780G chipset with Radeon HD 3200 integrated graphics. AMD’s 780 platform comes in two variants that have a great deal in common: the 780V (for value) features the DirectX 10 HD 3100 graphics core with 40 Unified Shaders and support for dual displays, while the 780G uses the Radeon HD3200 graphics core. We’ve seen something similar with the AMD 690 chipset but 780 takes this to a new level, with the choice of VGA, DVI, HDMI and Display Port connections.


No doubt you’re thinking about the prospect of a Home Theatre PC with the Sapphire ticking away at its heart, it’s the primary appeal of the platform after all. In which case we might as well break the bad news now because the PI-AM2RS780G has VGA and DVI outputs but doesn’t give you the choice of HDMI. This is a crying shame as the revised video processing in the graphics core will handle Blu-ray playback with a CPU load of less than 30 percent, making it ideal for an HTPC.


Still, this Sapphire board has some benefits as its based on the 780G spec with an HD 3200, which features a higher clock speed than the HD 3100 and the adds support for Hybrid Graphics. The idea behind this feature is incredibly simple. Until now any motherboard with an IGP would automatically disable the integrated graphics when you install AIB (Add In Board) graphics. The historical logic was impeccable as any graphics card was an improvement over any integrated graphics – until now.


The HD 3100/3200 core is very similar in specification to a Radeon HD 3450 graphics card; although the core speed is a little lower and it lacks dedicated local graphics memory. Even so there is the scope to use the 780G graphics core to assist the AIB by joining the two cores in CrossFire.


As it is early days with Hybrid Graphics you need to proceed carefully with the installation to allow the Catalyst drivers to sort things out. First you have to set the BIOS so you PC boots using the IGP. Generally you’d leave this feature on Auto and you can do that if you wish to use either the IGP or an AIB, but life isn’t so simple with Hybrid Graphics and Sapphire doesn’t help the cause as this feature is tucked away under ‘Miscellaneous Control’.

Once you’ve jumped through the hoops you’ll find that Hybrid Graphics works as advertised but that raises the bigger question. What is it for?


HD 3200 graphics core is far and away the best IGP that we have ever seen. It has a UVD (Unified Video Decoder) that supports Blu-ray and HD DVD playback with minimal CPU load, which means that you can install a cheap processor that requires very little cooling so your HTPC will be as near-silent as possible. Build a PC around 780G and it will handle every task under the sun short of gaming.


Add in a Radeon HD 3450 graphics card for £25, however, and you increase graphics performance and then when you enable Hybrid Graphics the frame rate will improve by a measurable amount. This boost in performance is free of charge but it doesn’t add the ability to perform a new task. You’re already able to run the Aero interface in Vista and to watch HD movies so the next step is to play games and that still requires a proper graphics card.
(image:SapphirePIAM2RS780Gangle)

As we’ve already explained this isn’t totally straightforward and there’s further evidence of confused thinking as 780G allows you to raise the core speed of the HD 3200 core in the BIOS. It’s hard to imagine a gamer who would tinker at that sort of level when £50 will get you a moderate graphics card that does a far better job, with a lot less fuss.


On the other hand it’s also hard to see who would build a HTPC that doesn’t have an HDMI output or digital audio. On that score the Sapphire PI-AM2RS780G compares very poorly with the likes of the Gigabyte GA-MA78GM-S2H, which only costs slightly more at £60.


Indeed, it seems as though Sapphire is aiming this motherboard at a very specific segment of the market: people who want a small, cheap, quiet PC that handles their daily tasks with the minimum of hassle. Fair enough that policy has worked for Intel for many years. But, even here we hit a small stumbling block since if you use the DVI output from the IGP, at least one and probably two of the four USB ports will be blocked.
(image:SapphirePIAM2RS780GIOpanel)

Still, there is always a market for a small, cheap and effective motherboard and no doubt this Sapphire will answer the prayers of a number of PC builders. If you’re completely skint and want to build a PC with a cheap Athlon 64 CPU that uses 780G graphics with a view to upgrading to a Phenom and a proper graphics card at a later date then it’ll do you nicely. The rest of us would do far better to spend slightly more on a 780G with more features.


There’s no denying that the 780G chipset is a jewel and the Sapphire PI-AM2RS780G is very cheap, but despite those two virtues it manages to leave us unimpressed due to its lack of features when compared to other 780G boards.