CeBIT is tough experience that most of you will never get to experience (lucky them…ed), but it is also quite an enlightening one. When I can break away from the endless meetings, I like to take a look at the products of some of the smaller Taiwanese manufacturers. Unfortunately, the majority of them are just cheap knock-offs of other products, waiting for branding.


So when Sapphire, a company better known for its graphics cards, told me it had an MP3 player, I was naturally sceptical. Sapphire was quite open about the fact it was a rebadged Korean player, but also said that it looked long and hard to find a player worthy enough of the Sapphire brand. The result is the Ivory Digital Audio Player and I think its search came up trumps. 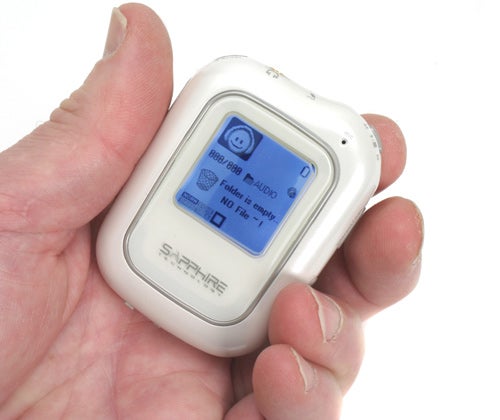 The Ivory is aptly named after its Ivory/Pearl. It’s certainly not very pretty, but it holds in the hand nicely because of its rounded edges. The top right of the player has a perfect thumb wheel including a click for controlling playback – although left handed people might struggle a little. Down the right hand side of the player, are two rocker switches providing four buttons for accessing the menu system, while, on the left hand side are controls for the volume and a hold switch. At the very top there’s a headphone jack and a microphone in/line-in. There is also a built in microphone, but the quality isn’t all that great.


The screen has a blue backlight and has an eight line display, 128 x 128 pixel resolution, which is fine for this type of device. It weighs next to nothing and once again, because of its rounded design it sits in your pocket perfectly. 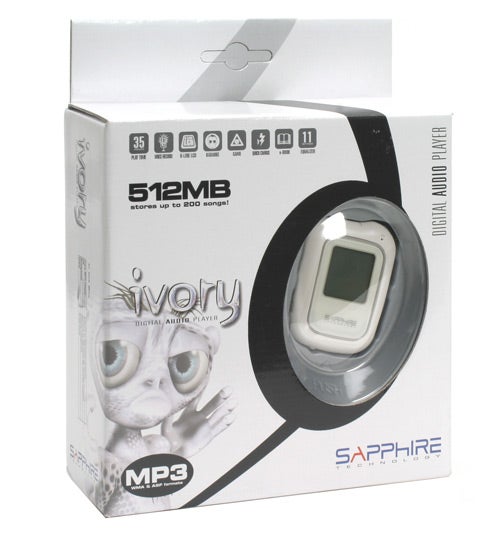 The Ivory takes 2.5 hours to charge but will give up to 35 hours of playback. That’s a very respectable time, but dependent mainly on how much you use the backlight. It will play MP3, WMA and ASF formats.


Thankfully, it uses a standard mini-USB connection and also uses this for charging. It is recognised as a mass storage device, so you can store files on it. Linux fans will be pleased to know that this makes it OS independent too.


Unlike so many players (Sony, Apple), you can drag your MP3s straight on to the device without using any silly DRM or memory-guzzling GUI. In the interface, you can browse your music in the traditional folder structure rather than using ID3 tags. Although, if you play a track it has the option of displaying the ID3 tags. Once a selected track has played, it will automatically play the next track in a folder. Therefore, playing the first track in an album will play the whole album before moving on to the next folder.

The device has support for up to two playlists. Adding tracks is pretty easy although it would be nice to see support for M3U files.


Bass and treble is fully adjustable, including a 22 band graphical equalizer should you want to tweak even more. There are 11 presets should you wish to deviate from the sound engineers suggested levels. 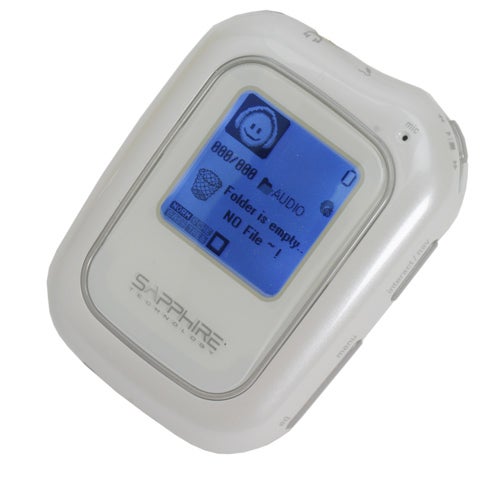 One feature of the player is its Karaoke facility, which ties in nicely with the Microphone support. It comes with a piece of software that is used for attaching lyrics to your MP3 tracks. It works really well. It doesn’t stop there though, as the player has the ability to adjust the pitch and speed of the track, which is nothing if not great fun. Pitch shifting causes a fair amount of distortion but for Karaoke that isn’t a huge problem. Changing the speed works fairly well and the pitch is maintained too. If you’re working out in the gym, this is actually a really good feature as you can speed up or slow down the beat of your music to match your body’s rhythm.


As well as being able to display Karaoke text, it can also read e-books in text file format and if that’s not enough, it even has an inbuilt Tetris game! 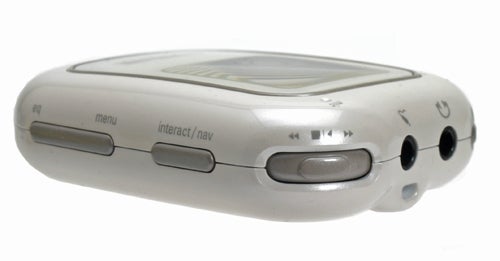 With all these features, it’s no wonder that the interface is a little tricky to get used to. The manual is comprehensive though with no pigeon English in sight. However, it’s certainly not one for someone who wants to just plug and play.


The headphones provided are white to match the player, so be on mugger alert in case anyone thinks you’ve got an iPod. The ‘phones actually don’t sound too bad considering the price. With a little bass boost from the interface they were passable but not particularly comfortable after a few hours. Replacement with a decent pair is recommended.


Testing with our previously reviewed Shure e4c headphones, I found the playback to be pretty good. There was an improvement noticed when changing to a Sony NW-E507 MP3 player mind you, but you had to be listening for it.


One aspect of this player that really impressed was that of amplification – it can get really loud! Generally, I kept playback at around the 50 per cent mark – much higher and it became uncomfortable with more white noise audible. This can be useful for older and quite quiet recordings.


The Sapphire Ivory is an excellent player and with a £63.45 price tag, I would find it very hard not to recommend this to anyone. It’s light weight, fully featured and has an excellent battery life. The only downside are its looks and slight interface complexity.