Technology moves fast, but even for those well versed in the speed of technological advance the timing of this upgrade from Sapphire is likely to catch many off guard. Just four months after we reviewed the Edge HD Mini PC we now have its successor: the HD2. Can it fix our grievances with the promising, if flawed original?

For those less familiar with the original, the Sapphire Edge HD2 is a tiny Atom powered PC (or nettop) with a sizeable hard drive and the power of Nvidia’s ION2 chip to ensure this diddy desktop can keep up with most multimedia and general computing tasks.

As you might expect, in following so soon after the HD, the HD2 is primarily about tweaks. Out goes the Atom D510 1.66GHz CPU to be replaced by a speedier Atom D525 1.8GHz dual core CPU. The hard drive is boosted from 250GB to 320GB and a new ION2 bios promises even smoother playback of Full HD video. 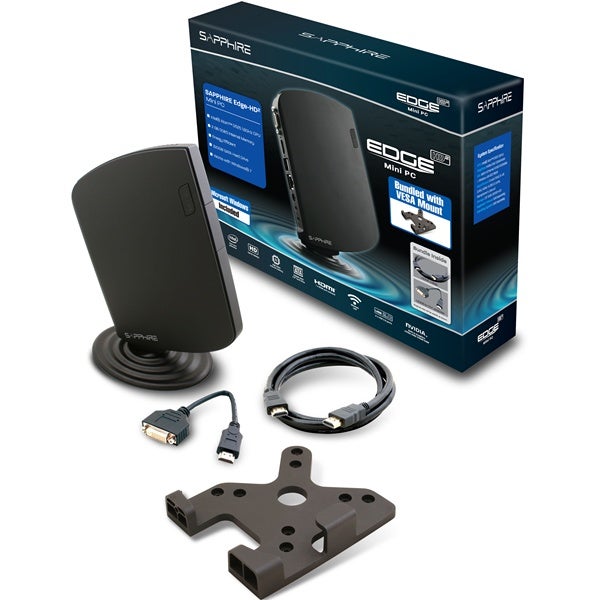 In addition Sapphire has responded to user feedback in offering a version of the HD2 with Windows 7 pre-installed whereas the original came simply with FreeDOS prompting you to install your own OS via USB key or using your own external drive (with no internal optical drives, these are your only options). Lastly Sapphire has bundled a VESA mount to fix the HD2 directly to the back of your TV or monitor (should it be freestanding) and also thrown in an HDMI cable and HDMI-DVI adaptor for good measure. When you couple this with the 2GB RAM (DDR2-800MHz), 802.11n WiFi, Gigabit Ethernet, four USB ports (two front, two back), audio-in, line-out, DVI and HDMI ports it all adds up to one comprehensive product offering.

It is comprehensive, yet remarkably compact too. Sapphire suggests the HD2 is the smallest PC in the world: it uses the same 193 x 148 x 22mm case (plus stand) as the original and has the same 530g weight. This isn’t true, but there is no shame in being little larger than a paperback novel and it is hugely practical for squeezing in and around existing AV equipment. While not fan-less, it is quiet in operation too (even under stress) and the tasteful, if somewhat dowdy, matt black finish will keep the dust away. 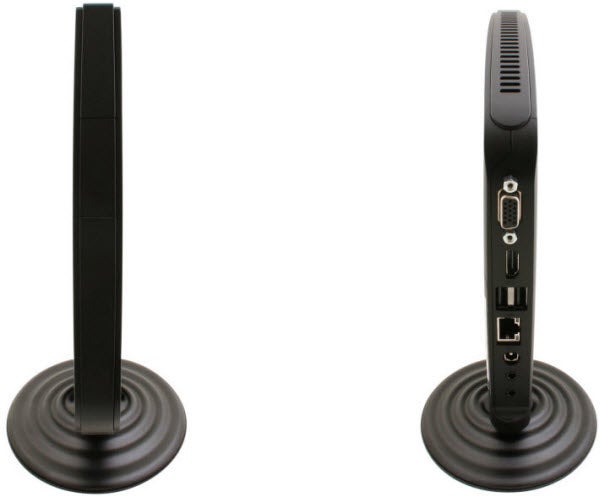 So how does it perform? We threw our stalwart benchmarks, Trackmania and PCMark, at the HD2 and with the former averaging 20.3fps and the latter scoring 2105 they told us exactly what we expected: you won’t want to be playing Crysis 2 or spending much time editing video on this thing, but for day-to-day office duties or as a media centre PC it will be fine.

As always the bottleneck comes down to Intel’s Atom processor (Windows Experience scored it at 3.5, while memory, graphics, gaming graphics and the hard disk managed 4.9, 4.7, 5.6 and 5.9 respectively), but as long as your online and local video is GPU accelerated you won’t run into a problem even with high bitrate 1080p. Thankfully GPU acceleration tends to be standard these days, even for the much maligned Adobe Flash. And of course being a proper PC, you don’t have to worry about format support and compatibility – if something doesn’t work you can guarantee there will be another program that will sort things for you.

With that it should be enough to keep the HD2 down to a one page review. Give it a round of applause, a strong rating and move on. Unfortunately things aren’t quite so straightforward…

Where Sapphire has tripped up on its own shoelaces is pricing. This isn’t to say the company hasn’t created a value for money offering, in the right circumstances it has, but in trying to please everyone it has made things unnecessarily complex.

As mentioned the original HD shipped only with FreeDos. This kept the value down to £248, a fair price considering mouse, keyboard and a copy of Windows could inflate the final cost closer to £350/400 if spares were not to hand. With the HD2, however, things get tricky. 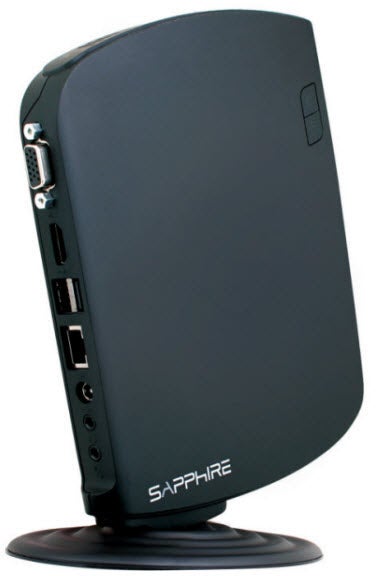 While the HD was originally targeted at more tech savvy consumers, its tiny form factor attracted mainstream users who were intimidated by installing their own OS (and all the drivers Sapphire provided on a USB key). To solve this we now have the option of Windows, but remarkably Sapphire has opted for Windows 7 Ultimate. The reasoning for this is Ultimate provides support for a Multilingual User Interface (MUI) out of the box. The problem is a needless array of enterprise specific functionality is also included and Ultimate comes at a greater cost pushing the HD2 up to a hefty £345.

Will everyday users want to pay a near £100 premium for pre-installed Windows with business tools and Slovakian language support? It may make international shipping easier for Sapphire, but it is we who are paying for their convenience. Consequently tech savvy users have an excellent stripped down option since, minus the VESA mount [£10 separately], it is £265), but mainstream consumers will pay through the nose if they don’t have a technically minded friend to help them out. At £265 the tweaked HD2 is good value and you get only what you need, at £345 you might as well buy an ION-equipped netbook with HDMI and plug it into your TV whenever you want a PC media centre. 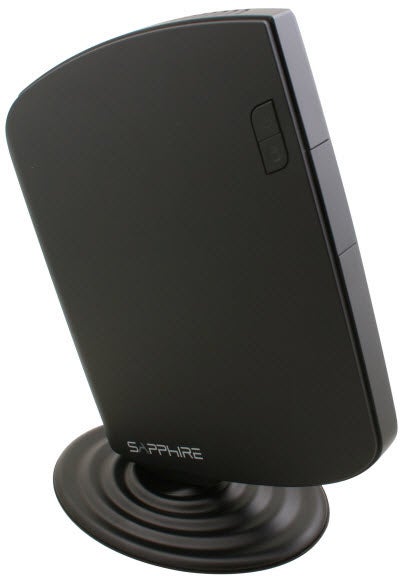 As a result we can only recommend the HD2 if you’re comfortable installing an operating system. Windows 7 Home Premium costs from just £50 and Microsoft’s simple and free USB/DVD conversion tool will get it onto a USB key if you don’t have an external drive. Yes, sometimes a bit of DIY has its rewards.

In releasing the HD2 so quickly after the HD, Sapphire has managed to tweak a number of issues which affected its predecessor and create a top notch and wonderfully compact media centre PC. There is plenty of connectivity and enough graphical prowess to overcome the limitations of its upgraded-but-still-pedestrian Atom CPU. Build quality is also excellent and even under stress it is quiet enough not to be a distraction. On the flip side the value of the HD2 depends on whether you’re comfortable buying the basic version without Windows pre-installed. We have opted to score based on this entry price for the HD2, but beware this £80 saving is the difference between a TrustedReviews recommendation and us telling you to buy an ION-equipped netbook instead.