Until recently, unless you were a pro videomaker with the budget for a fully-fledged sealed housing, if you wanted to shoot underwater only one manufacturer’s name would spring to mind: Panasonic. The SDR-SW20 and SW21 brought industrial-strength waterproofing to consumer camcorders. But Sanyo has also been offering its own underwater devices for a similar amount of time, and has now beaten Panasonic to another milestone. The Xacti VPC-WH1 can not only shoot underwater – it can shoot in HD.


This isn’t the only area where Sanyo surpasses Panasonic with the WH1, either. The SW20 operates at depths down to 1.5m, and the SW21 goes to 2m, but Sanyo claims its new model can descend to 3m. In order to achieve this feat, every port and opening is protected by a door sealed by a rubberised gasket. These have all been rendered nearly impossible to knock open accidentally, using a variety of sliding catches. The locking screws on the SW21 still inspire slightly more confidence, but we tried very hard to jog the WH1’s doors open, and failed miserably. However, whilst this earns the Sanyo an IPX8 waterproof rating, there’s no word on what height you can drop the device from without damage, where the SW20 and 21 can survive tumbles from up to 1.2m.

The WH1’s internal specification is also relatively modest. A tiny 1/6in CMOS sensor with 1.1-megapixels records the footage, although on the plus side this enables a sizeable 30x optical zoom. The resolutions on offer only extend to 1,280 x 720, not Full HD, with a non-European 30 frames per second. Alternatively, you can record with a 640 x 480 resolution at either 30 or 60 frames per second. All of these formats use progressively scanned video. The top quality mode has a data rate of 9Mbits/sec, so an 8GB SDHC card will be enough for nearly two hours of video. We also found battery life was immense, lasting over three hours on a single charge. 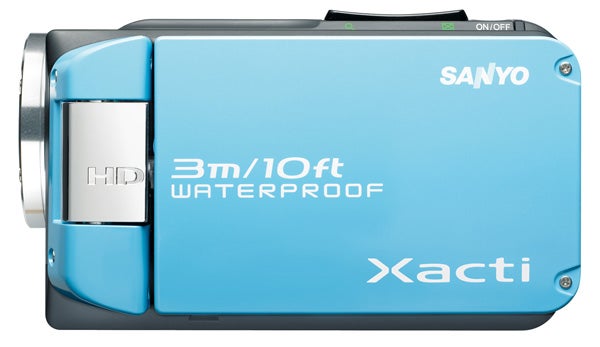 Still images can be capture at up to 1,600 x 1,200 – clearly with some interpolation – and you can take sequential shots. In 2-megapixel mode, you can take up to 29 photos in a row, and in 1.1-megapixel mode 30, although Sanyo doesn’t divulge the frame rate in either case.

The WH1 does have some manual settings available, but these are all buried in the menu, and clearly not intended for regular access. The eight scene modes are found in the first level of the menu, including an Underwater option. You need to head to the second menu level to adjust focus manually or select macro mode.


Only when you get to the third menu page do you find the settings for white balance and exposure. The latter actually provides aperture and shutter priority modes, as well as a fully manual option where you can configure both independently. The iris can be varied from F/2.1 to F/8, and the shutter from four seconds to 1/500th, although we found the shutter didn’t actually appear to go below 1/30th with video even if we set it lower. 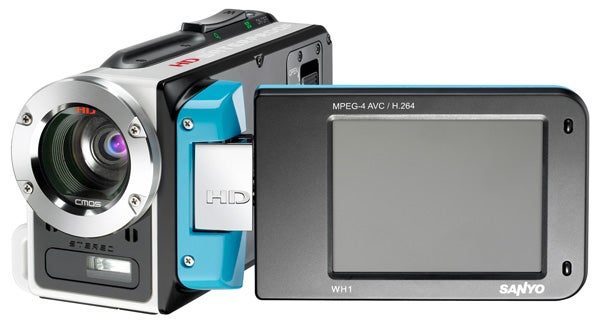 Other optional settings include a Face Chaser detection system, which tracks up to 12 faces. There’s a high sensitivity mode, which is actually what other manufacturers call slow shutter. The minimum shutter speed then drops to 1/15th, reducing the minimum amount of light required to 3 lux. If you head further into the settings, you can even adjust the image saturation and sharpening, with vivid, soft, plus soft and vivid modes available. However, backlight compensation is nowhere to be found – a surprising omission when you could potentially be shooting up towards a brighter water surface from deeper, darker areas.

The menu also has two modes – simple and normal, with the former hiding virtually all the options except video/photo resolution, enabling macro mode, and cycling through the flash options. Not surprisingly, there are no minijacks for external microphone or headphone, nor an accessory shoe. You wouldn’t be able to use these underwater, but some people might be tempted to try if they were available, so their absence is probably a good thing.


The WH1 is relatively comfortable to handle, with video record buttons both at the rear and on the front near the lens. So you can hold it either in the traditional HandyCam style or in the torch-like orientation which is now becoming a popular alternative. Both options put a finger on the zoom rocker. However, there are no extra record and zoom buttons on the edge of the LCD, which we usually find can come in handy.

We had been used to Sanyo camcorders not putting up much of a fight when it comes to image quality. But, like Samsung, Sanyo has been gradually improving this aspect of its products, culminating in the impressive VPC-HD2000. Unfortunately, with its small CMOS sensor, the WH1 was never going to be capable of feats matching the HD2000. In good lighting, performance is decent enough, with faithful colour and enough detail to warrant the HD classification.


However, low light performance is crucial for all camcorders, particularly one intended for shooting in murky underwater conditions, and this is where the WH1 comes more unstuck. In poor illumination, a reasonable amount of colour is maintained and white balance stays relatively accurate, but there are clear signs of grain and the overall image is dull. Enabling High Sensitivity brightens things up considerably, but at the expense of seething grain, which sometimes sports a criss-cross pattern reminiscent of tartan. This translates to acceptable performance in shallow water in good light, but try diving close to the 3m limit on a dull day and you may not be so pleased with the results. 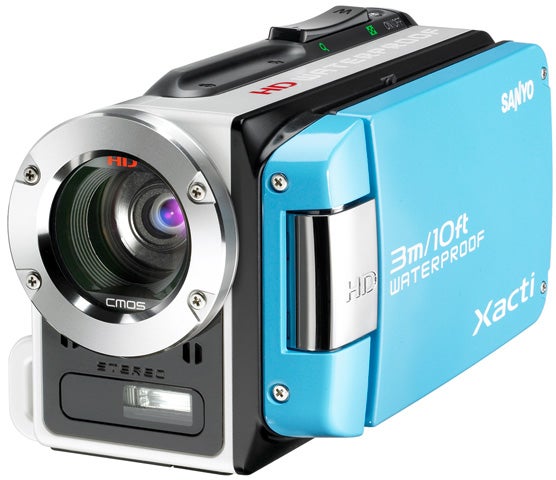 Underneath the SDHC slot is a proprietary dual-function port for USB 2.0 and A/V, with a composite and stereo RCA audio breakout cable provided for the latter, although component is an optional extra. There is also an HDMI port, although this is of the mini variety so will require an adapter for attaching to an HDTV, which isn’t included. Video is recorded as MPEG-4 AVC H.264, but not in AVCHD format. Instead, MP4 files are used, which we have found aren’t as universally compatible with editing software. Adobe software in particular has trouble interpreting these correctly. The WH1 actually has video and image editing capabilities built in, should you not have a computer to hand for this, although these are very modest.


On paper, Sanyo looked like it had stolen a march on Panasonic with the Xacti VPC-WH1, as the first consumer-oriented waterproof HD camcorder. But whilst its moisture-repelling capabilities are commendable, video performance in poorly lit underwater conditions isn’t so outstanding. Nevertheless, you will still be able to grab many moments of aquatic pleasure, and at under £300 it’s incredibly good value. So this may not be the perfect HD video water baby, but at least Sanyo’s Xacti VPC-WH1 won’t mean you have to dig deep to dive deep.