The camcorder market used to be a four-horse race, with the Japanese quartet of Sony, Panasonic, Canon and JVC taking the lion’s share of attention. But the slow convergence with digital cameras, and digital technology in general, has given other brands the chance to muscle in on the action. Samsung has shown it can match the big names for image quality with its VP-HMX20, and now it’s Sanyo’s turn in the limelight. The new Xacti VPC-HD2000 is the first consumer Full HD camcorder to offer 60 progressive frames per second shooting.


In the past, Sanyo has distinguished itself by taking a fairly unorthodox approach to the design of its camcorders. Instead of using the traditional handycam or palmcorder formats, its Xactis seemed to owe as much to Philishave, with a pistol handgrip and protruding lens. The VPC-HD2000 continues in this vein, and doesn’t look physically that different to the VPC-HD1000 (it records to SD/SDHC memory cards too). But what’s inside has been significantly upgraded, and there’s a similarly featured handycam-style model called the VPC-FH1 due in a few months, too. 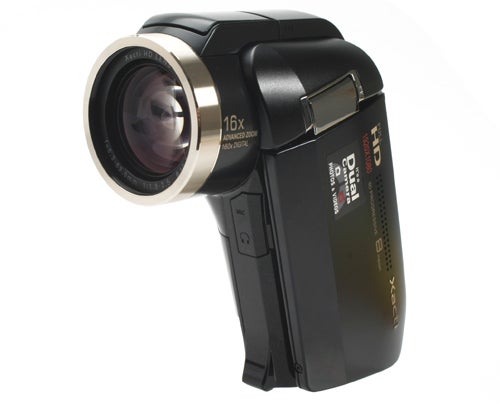 The imaging sensor is still a healthily large 1/2.5in CMOS, but this now has a native 8.1-megapixel resolution, twice that of the previous generation. This doesn’t have a benefit for video shooting, as 2.08-megapixels are all you need for Full HD, and the HD1000 already shot at 1,920 x 1,080. 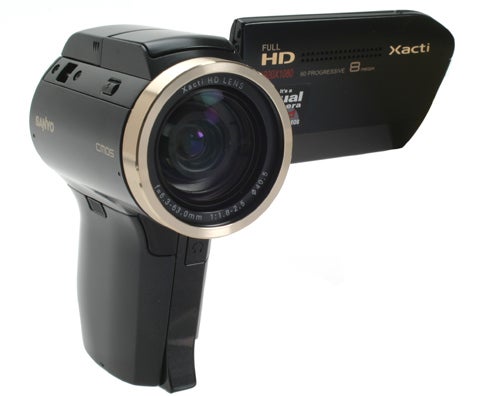 The biggest upside to this high-res sensor is that you can now take digital photos natively at 3,264 x 2,448, and Sanyo throws in interpolation as well to provide the option for 12-megapixel stills at 4,000 x 3,000. To draw attention to these compact-busting digital photography capabilities, Sanyo is calling the HD2000 a Dual Camera, implying that this model is as comfortable in either camp.


Sanyo also claims the HD2000 has a 16x Advanced Zoom, where the HD1000 only offered 10x optical zoom. However, Advanced Zoom isn’t quite the same as Optical Zoom. When shooting video, the camcorder is using more pixels on its CMOS than it needs for 1,920 x 1,080, so it can safely zoom in on a portion of the sensor without losing resolution. 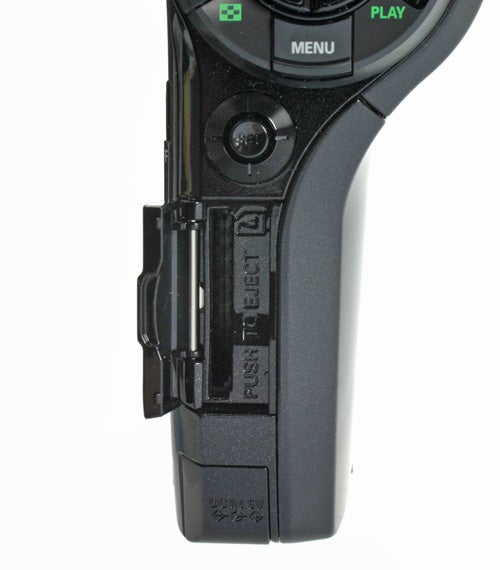 This is not a unique feature – Canon also uses the technique to provide its Advanced Zoom in the FS11. The only potential downside is that, as you will be using a smaller physical area of the chip when zoomed in to the maximum, low light performance will be slightly worse.

The HD2000 offers no less than five regular video shooting modes. As mentioned earlier, the top setting operates at 60 progressive frames per second and 1,920 x 1,080 Full HD. The data rate is a relatively healthy 24Mbits/sec, although it is worth bearing in mind that this will actually use more aggressive compression than the next setting down, which keeps the Full HD resolution but records 60 interlaced fields instead at a 16Mbits/sec data rate. Then there’s Full HD at 30 progressive frames per second and 12Mbits/sec – essentially half of the top setting – and 720p at 9Mbits/sec. A VGA option is also available, again using 30 progressive frames per second, with a 3Mbits/sec data rate. A 4GB SDHC card is enough for about 20 minutes of footage at the top 60fps Full HD quality setting. 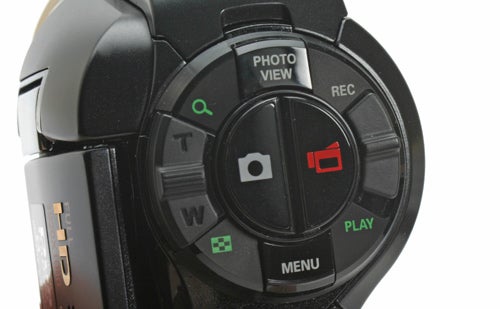 As if the 60fps recording weren’t enough, Sanyo offers two ultra-high speed modes, too, for producing smooth slow motion. You can record at 240fps or 600fps, but with a proportionate reduction in resolution to compensate for the increased frame rate. The 240fps mode uses 448 x 336, and the 600fps mode 192 x 108, which isn’t going to be tremendously useful most of the time. The video is then played back at 60fps, giving you 25 per cent and 10 per cent slow-mo respectively. 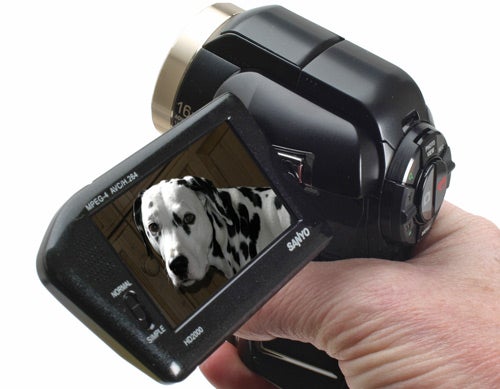 There are quite a few manual settings available, but only if you delve into the full menu. No quick access to the most oft-used options is provided. There are four white balance presets, two each for natural and artificial lighting, plus fully automatic and manual. Aside from automatic exposure, there are shutter and aperture priority modes, plus fully manual control over both. The iris can be varied from F1.8 to F8, and the shutter from four seconds to 1/10,000th, although in video mode the minimum effective shutter is 1/30th, and in photo mode you can’t go beyond 1/1,000th. All of this is configured with the little joystick, as is the manual exposure. Sanyo now even includes its own version of face detection called Face Chaser. This tracks human visages, and then sets the camcorder so they are properly exposed. 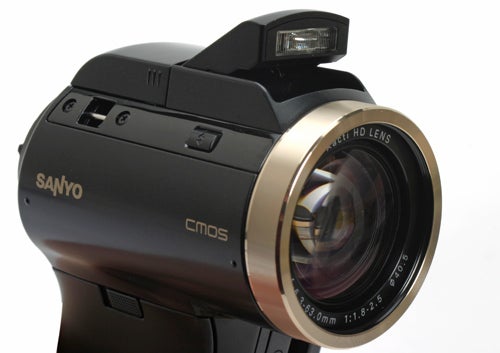 You even get jacks for microphone input and headphone output, although these are positioned on the front where your index finger naturally falls when using the camcorder handheld. The microphone jack is also of the 2.5mm TS variety. A 2.5-3.5mm adapter cable is included in the box, but if you forget to bring this with you, you will have problems. There’s even a full-sized, standard accessory shoe lurking secretively beneath a slide-off plastic cover on the top of the camcorder.

On paper, then, the Xacti VPC-HD2000 looks like a pretty corking camcorder. However, previous Sanyos haven’t been able to keep up with the big names for image quality. The HD2000 does appear to be a step forward, although choosing between the many modes depends on what you’re shooting. For mostly static subjects, the Full HD 60i mode provides the most artefact-free footage, but motion reveals interlacing. Here the 60p mode comes into its own. But this only smoothes motion. Actual image quality is no better than the 30p mode. 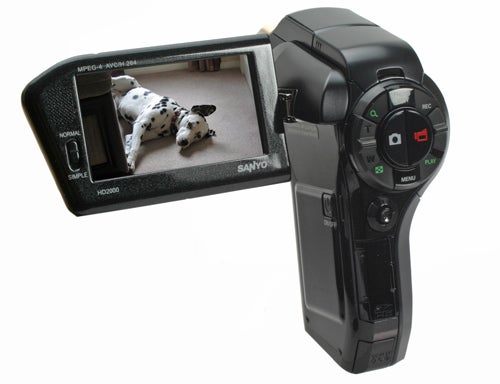 In all three cases, colour fidelity is excellent in good lighting, and detail clear and sharp. The autofocus took a little more time to settle down than, say, Canon’s Instant AF. Overall, results were well beyond the cheap-and-cheerful image quality of most previous Sanyo offerings. However, the HD2000 still isn’t a low-light supremo. It is an improvement over its predecessors, but there is significant discolouration and grain visible in the poorest illumination. 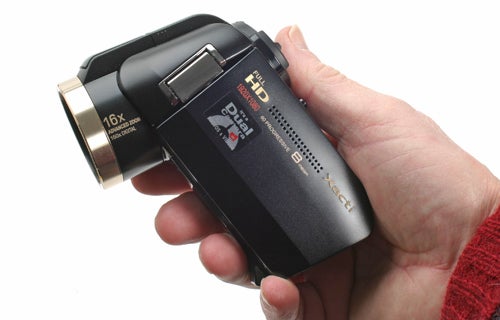 When it comes to editing and viewing your video, the Sanyo offers the usual options. The HD2000 doesn’t have any data or AV connectivity on the camcorder body itself. Instead, a docking station is provided with micro USB, HDMI, and a proprietary connection for component, S-video and composite, all with stereo RCA audio. 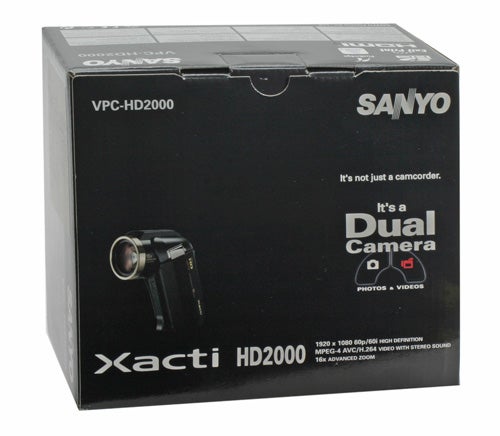 As with previous Sanyo Xacti HD models, although MPEG-4 AVC H.264 is used for recording, this isn’t the now ubiquitous AVCHD. Instead, MP4 files are produced. We found these not universally compatible. Corel VideoStudio Pro X2 couldn’t import the 60p files, although the 60i ones and other formats were fine. Adobe Premiere Pro CS4 imported all formats, but the 60p files were extremely sluggish on the timeline. CyberLink PowerDirector 7 had no problems with any of the Sanyo’s files. A copy of Nero 8 Essentials is included in the box, although this doesn’t offer particularly elaborate editing capabilities.


With each new model, Sanyo gets that little bit closer to producing a camcorder to compete with the best available. The Xacti VPC-HD2000 is another step in the right direction. We still don’t like the fact that no 50fps version more suited to European standards is available, and image quality hasn’t quite entered the top league just yet. But the price is likely to drop below £500 fairly soon, if previous models are anything to go by. With very good video quality and photographic abilities, this may not be the master of both areas, but it’s good enough to be one of the few crossover devices to be worth having for either purpose.