If we gave camcorders awards for their appearance, the Sanyo Xacti VPC-HD1000 would be a shoe-in. Styled like a cross between an electric shaver and a science fiction ray gun, it’s one of the best-looking camcorders we’ve seen. It’s tiny, too, weighing in at just over 300g with battery and just 11cm across its longest edge. Although the lens is a little bulbous, you could still consider carrying the Xacti in a coat pocket. 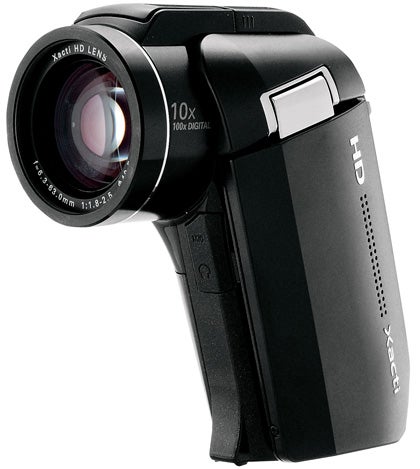 Sanyo has been trying to crack the crossover market for some time, and 2006’s Xacti VPC-HD1 made a noble attempt to be both a great digital camera and a good camcorder. But although it packed a laudable number of features into a miniscule package, including 720p HD video recording and 5-megapixel stills, its image quality failed to impress us and video recording couldn’t compete with a dedicated camcorder either. 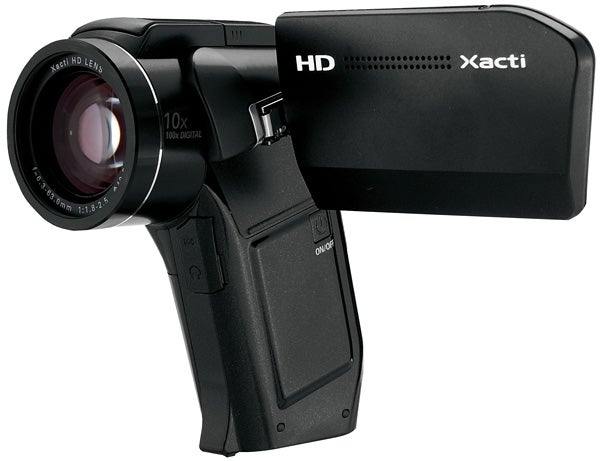 Sanyo had another stab with the VPC-HD2, and now it’s back with a more video-oriented strategy. Aside from much improved looks, the VPC-HD1000 also boasts Full HD video recording at 1,920 x 1,080, as found on premium models from JVC and Panasonic costing hundreds more.


As with Sony’s consumer HD camcorders, the Sanyo relies on a CMOS sensor rather than a CCD one. Despite the HD1000’s diminutive proportions, the CMOS sensor used is a hefty 1/2.5in model, with a 4-megapixel resolution. This is actually larger and with more pixels than Sony’s latest models. However, four megapixels is fairly lowly by digital camera standards these days. It’s also a megapixel behind the HD1, and three megapixels behind the HD2. As a result, stills have dropped down to a maximum resolution of 2,288 x 1,712, although an interpolated 3,264 x 2,448 option is also available. 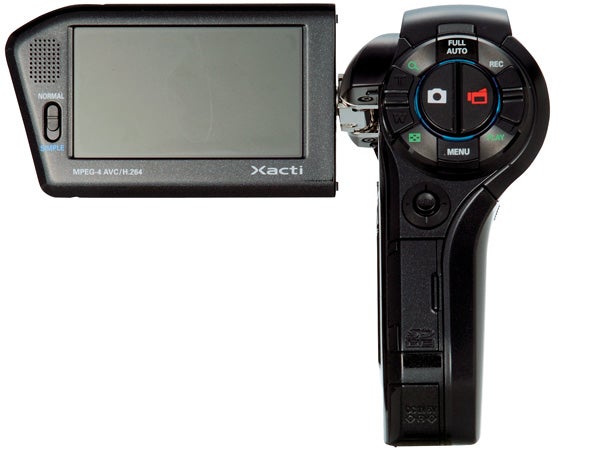 All these video formats are recorded using the MPEG-4 AVC/H.264 format, as with AVCHD. The Full HD and 60fps 1,280 x 720 are recorded at 12Mbits/sec, dropping to 3Mbits/sec for 640 x 480 at 30fps, with other options in between. SD memory is used for storage, so even in Full HD mode, you should be able to fit 90 minutes of video on a 8GB SDHC card. Unfortunately, one thing Sanyo doesn’t include in the box is an SD card, although 8GB SDHC cards can be had for under £50 these days and 16GB models are just arriving on the market. 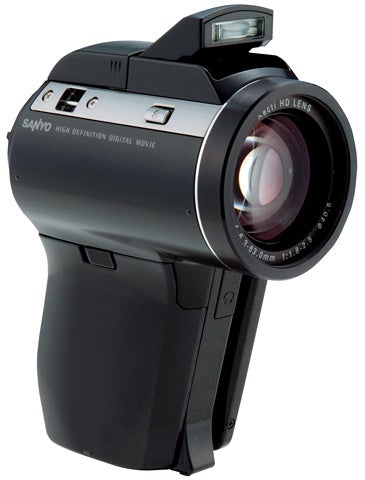 The Xacti is entirely aimed at the point-and-shoot market, and has few features for the enthusiast. Nevertheless, it does offer microphone and headphone minijacks, although no accessory shoe. In its place, there’s a built-in flash which pops up at the press of a button. There are seven auto-exposure modes on offer, including sports, portrait, landscape, night portrait, snow & beach, fireworks and lamp.


Manual focus is available, but is operated via the joystick rather than a lens ring. You can choose between nine-point and spot focus when in auto mode. The exposure uses multiple points, the centre, or spot. You can also select aperture or shutter priority modes, or control both separately. The aperture can be varied from F1.8 to F8, which isn’t a particularly wide range, and shutter from ½ to 1/500, which is also fairly narrow. In general, the menu setup and choices will feel more familiar to a digital camera user than a camcorder expert, although there is a lot of overlap.

The Xacti has plenty to commend it in theory, but previous models have been let down by their performance. This is clearly not a device aimed at the expert in either of its two areas, and it doesn’t win any prizes in either. As a camcorder, the HD1000 does better than its predecessors. With plenty of lighting, the video quality is reasonable, although colours tend to be a little over saturated. The optical zoom is quite slow, if you’re used to Sony’s extremely rapid response. The autofocus is also a tad sluggish. 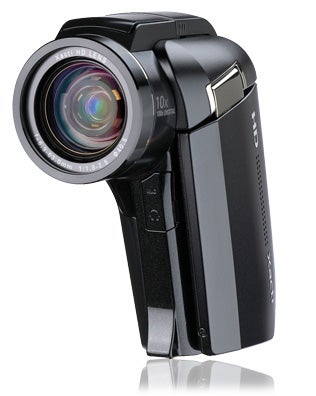 Rapid changes in scenery cause obvious pixilation, as 12Mbits/sec is rather a low data rate for Full HD, even using MPEG-4 AVC/H.264 compression. There’s also a lot of grain visible in low light. Overall, the Xacti’s video quality is well behind what the big camcorder brands can muster with their HD models – particularly HDV ones. But at least it’s better than previous Xactis, which exhibited nasty smearing and artefacts in fast motion. Still images are also a little less sharp than we would have wanted, although here the HD1000 will be quite acceptable for most everyday users. Its digital photography is better than what most similar camcorders are capable of. 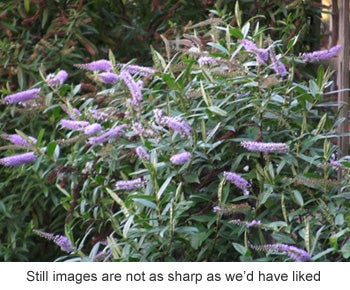 The camcorder itself has no connectivity options whatsoever. Instead, a small docking station is included with connections for HDMI, a combined plug for analog component, S-video and composite, plus USB. A button on the front of the docking station turns on the camcorder when it’s docked, as the power switch is hidden beneath the LCD when it’s shut.


The Sanyo records its video as MP4 files. Unfortunately, not every application supports editing MP4s natively. And we couldn’t find a third party player which could handle the files reliably. Ulead VideoStudio 11 can load and edit them, but extremely sluggishly. Sanyo supplies Ulead’s DVD MovieFactory 5 SE, which can import the MP4 files, encode them and burn to disc, but not Blu-ray.


Sanyo is to be commended for another bold attempt to unify the differing needs of camcorder and digital camera users. However, it still doesn’t quite pull it off. The VPC-HD1000 is an impressive device and you’re sure to evoke admiring glances when you whip it out in public. But the video quality is below that of HD camcorders from the big brands, and a sub-£200 pocket camera from the likes of Canon or Panasonic will beat its still images. So, yet again, the Xacti is a reasonable jack of two trades, but not quite master enough of either.